The Sweetwater Range overall is spectacular and colorful.  The range is quite distinct from neighboring peaks, and can feel like you are on another planet when walking up its slopes.

The saddle between the peaks is at about 11,290', although the traverse along the ridge goes up and down, so the actual elevation gain from Patterson to Wheeler one way is about 520' in 2.1 miles. Hiking both peaks from Lobdell Lake is about 14 1/4 miles round trip. 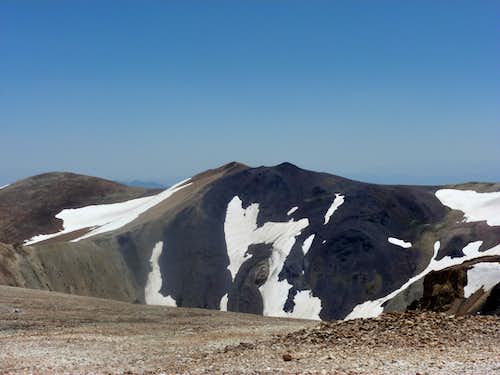 From Bridgeport, California drive 15 miles north on Highway 395 to Bircham Flat Road (Road 31). If coming from the north, Bircham Flat Road is about 2 miles south of the junction with Highway 108 (Sonora Pass Junction). Once on Bircham Flat Road, travel about 4.4 miles until reaching Road 67, which is well marked with a cairn and a National Forest sign. Turn right onto Road 67.

Continue on Road 67 for 6.2 miles to Lobdell Lake, which is actually a reservoir. Road 31 is well-graded and suitable for 2WD. Road 67 is good for about 2 miles, but then drops down into the forest where there are usually several stream crossings. 4WD is recommended to get through this to Lobdell Lake.

Alternate approach
It is also possible to approach from the east side via Sweetwater Road (Highway 338). If coming from Bridgeport, about 6 miles north past the CA/NV line is the Sweetwater Ranch and a USFS sign on the left to the Silverado Canyon. After about a mile on this road, the road forks left. This is USFS 198 road. Continue along this road as it winds uphill. Several offshoots go downhill, but the main road leads into the mountains. About 6.3 miles from the highway the road reaches a small plateau at around 8500'. This is the best place to park. From here the summit is about 4 miles and 3,200'. Once you start hiking, you will pass the Boulder Flat Mining Camp after about 2 1/2 miles. This is about 1,450' below the summit.

This road gets nasty at times, especially higher up, and 4WD is recommended. For those who have climbed Patterson from Lobdell Lake, this is an alternate route to explore the area, and a way to hike Wheeler Peak without having to do Patterson as well. Bring a Forest Service map with roads accurately designated.

Thanks to Dave K for providing me a scanned copy of directions used for this description. 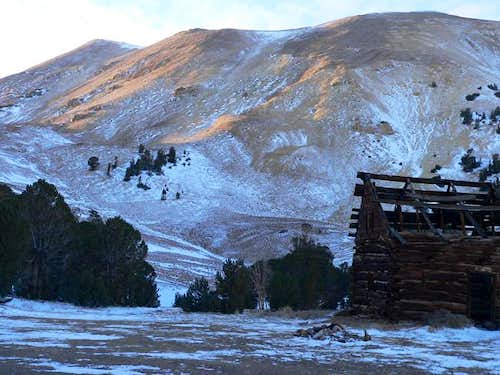 For the standard route from Lobdell Lake (a double hike of Mount Patterson and Wheeler Peak), once at the lake, take the road along the top side (east side) of the lake. The road follows the Desert Creek for a mile or so until it turns up towards the mountains. After the road turns up, it is about 3.7 miles to Mount Patterson. 2600' is gained from the lake. Once close to the summit of Mount Patterson, Wheeler Peak finally comes into view. It does not appear daunting, and it definitely is not too difficult. It is a 2.1 mile trek from summit to summit. People often leave their packs at Mount Patterson to lighten the load for the 4.2 mile round trip side hike to Wheeler Peak. 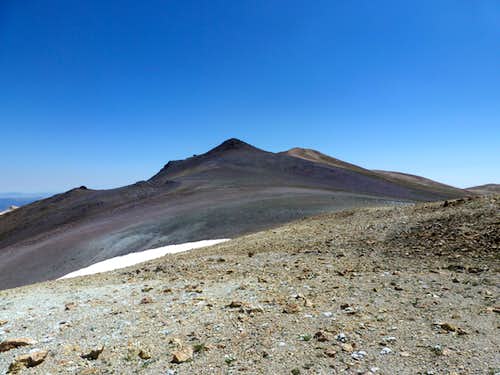 Approaching the two summits of Wheeler Peak. The true summit is on the right.

All told, hiking both peaks via this approach requires a hike of 14 1/4 miles and an elevation gain of about 3700' total. In my opinion the longer route is well worth the extra distance from the alternative route described in the "Getting There" section. This is because Lobdell Lake is gorgeous, and this approach allows hikers to see the entire range and experience the majesty of this area in one long day.  The route is pretty straightforward and despite the long distance, the existence of mining roads makes the trek pretty easy overall.  Doing the entire hike in 6-8 hours from Lobdell Lake is probably quite reasonable for most hikers. 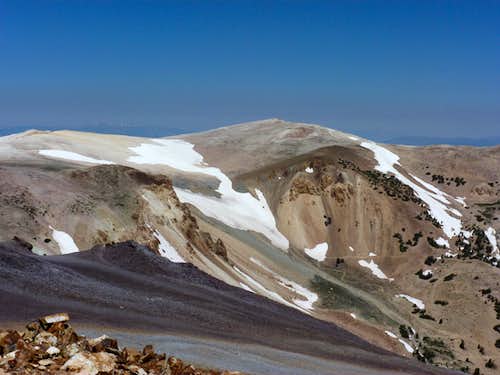 Mount Patterson seen from the summit of Wheeler Peak

The Sweetwater Range is located mostly within the Humboldt-Toiyabe National Forest. No permits are required, except for campfires, which may be subject to seasonal restrictions.

Along Roads 31, 67 and 115 are several primitive campsites. Perhaps the easiest and most accessible to reach with 2WD is about 2 miles up road 67 on the way to Lobdell Lake. This is roughly 6 1/2 miles off of 395 at about 8430'. For those with 4WD, camp closer to Lobdell Lake. There are several nice spots pretty close to the lake itself. Mosquitoes are present in this area and their severity varies from season to season. Bring bug spray no matter where you camp. After a very wet spring left a green terrain with roaring creeks, we camped on July 22, 2011 and the found the mosquitoes to be annoying, but not overwhelming.

Spence has a great panoramic photo identifying the peaks in the area seen from Mount Patterson, including Wheeler Peak.

Traverse of the Sweetwater Mountains