The idea of heading up to Wheeler Peak had been in my mind for perhaps two years. Ever since a friend had mentioned it, I'd thought about it from time to time. It wasn't too far away, but it did always seem to be too far away at the same time. Regardless, as opposed to my usual behavior of taking a mountain-related road trip that spontaneously developed on a Friday afternoon at work, this time I'd planned in advance to visit Great Basin National Park. It was Wednesday night that I decided to do it. I'd head up the trail on Saturday and see what unfolded from there.

Gear would be the usual light load, for I understood that this would be a decently quick day hike of a total distance of approximately 8.2 miles as long as I stayed on trail.

The weather on Mountain-Forecast.com was supposed to be sunny as opposed to the weekend prior, which consisted of thunderstorms across nearly the entire state of Nevada. With everything packed up for the journey, including a night of car camping, I hit the road on Friday evening.

I reached the entrance to the park after an approximately 4-hour drive. I was surprised and briefly disheartened when I saw the label "CLOSED" next to Wheeler Peak. I then figured that the label was strictly for the campground since the roadway didn't have barracades to prevent access. 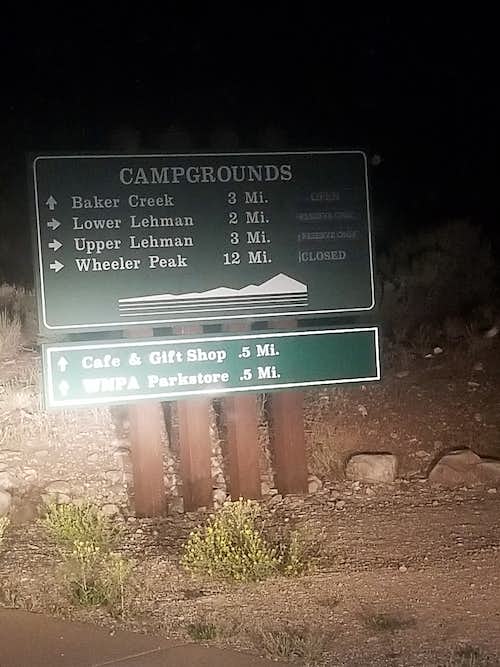 The road twisted and turned its way up into the high country as I cautiously drove on through the night. Elevation markers were placed every 500 vertical feet. 8500, 9000, 9500. Just before reaching the trailhead I passed a 10,000ft marker. 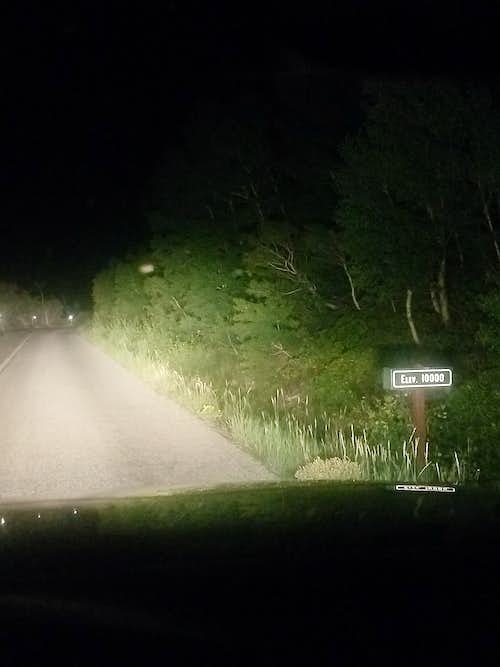 I arrived at the trailhead at 22:15 or so. It had turned cool out, perhaps to the mid-50s, and a feeling of fatigue washed over me as I got out and began reorganizing the vehicle in order to stretch out comfortably. Shortly before I fell asleep, I journaled:

"Here I am writing as I car camp up at the Wheeler Peak TH. It was somewhat of a lonesome drive up this way, with many miles in the dark. Nonetheless it was good, and I'm excited to see tomorow while I'm just as content to be settling in for the evening with some Nighty Night tea. The night is cool at perhaps the mid-50s, and it's still warm in the vehicle presently. The stillness outside reminds me of last summer in The Winds up above Seneca Lake on our way back from Gannett.

"In terms of the car camping, I always tell myself that I should do more of it. Nonetheless it is challenging for whatever reason(s) to go at it alone. It's hard to say why. I'll force myself to do it and I feel grateeful once I'm there doing it, but getting there is sometimes the miracle. It seems to take just about everything I have to get myself there. Anyhow, tomorrow is coming early, and then comes the journey up to 13K, provided that this keeps falling into place. Weather looked good. Hope the smoke clears at least a tad. It'll be cool to see how I sleep tonight at 10,500' or so [TH is really at 10161']. So far I feel relaxed though quite drowsy."

I awoke from a pleasant sleep when the alarm sounded at 05:00. I'd slept at least 4.5 hours solid without waking, which, though barely sufficient for my professional life, was plenty of sleep for spending a day outdoors in the mountains. I heard a vehicle approach the crest of the road on which the trailhead parking was. It sounded like it had stopped. I leaned up and attempted to look to see it, but my sun blind blocked the view through the windshield. After a 10-second pause, the vehicle drove off. I noticed a small rectangular light attached to the top of its cab. Forest service personnell, I thought. Perhaps I wasn't technically supposed to car camp here. Not long after this I changed into my hiking clothes and made final adjustments to my gear. In the twilight I began.

Immediately I was hiking within a lush, clean stand of aspens. 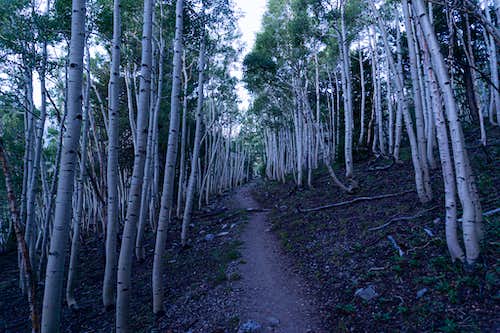 I was quickly able to see views of Wheeler Peak and its adjacent Jeff Davis Peak. 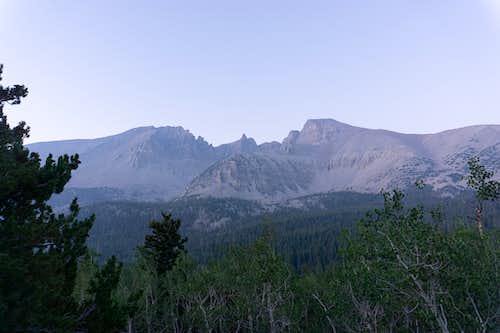 Up ahead I saw movement while approaching the first open meadow on the trail. Five deer silently moved a little farther from the trail as I passed. The fact that they'd lazily walked only 40 or 50 feet from where they originally were made it clear that they were used to seeing people around. 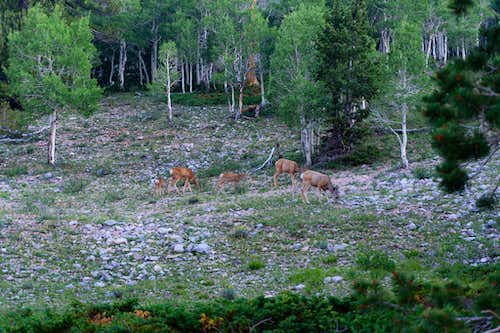 The sun rose, seemingly from the ground. Here at probably 10,500', its neon pinkish-red hue appeared similar to the latest sunsets. The massive rock faces to the north began to glow. 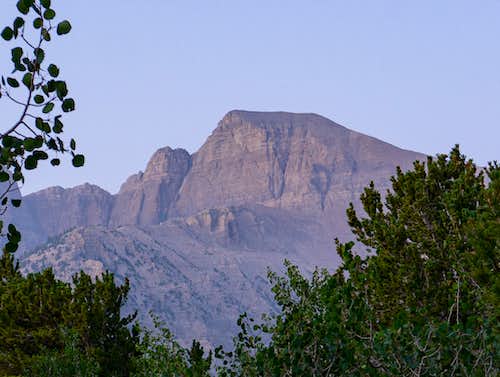 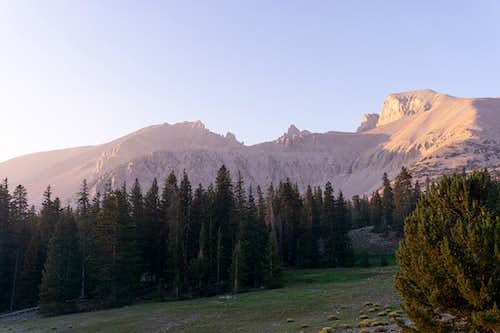 As the sun continued to climb, it appeared that the haze from this summer's fires would indeed affect visibility once I was up higher, but I would still continue on to see what it looked like. 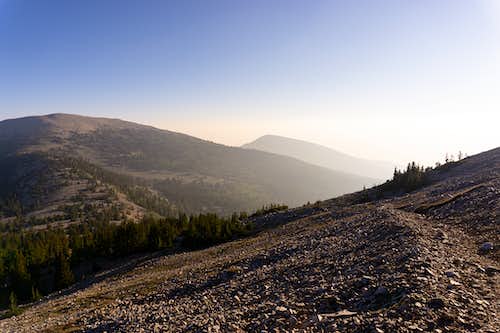 Soon I began to encounter the most challenging aspect of the trail---seemingly granulated rock from, presumably, all of the foot traffic that has stepped across it for years and years. I was reminded of living back east and walking on the beaches of North Carolina. Fortunately more of the trail was solid and easily navigable. Continuing upward, it seemed as though I was reaching the top layers of haze. Far in the distance was a mountaintop, appearing like an island in the sky. 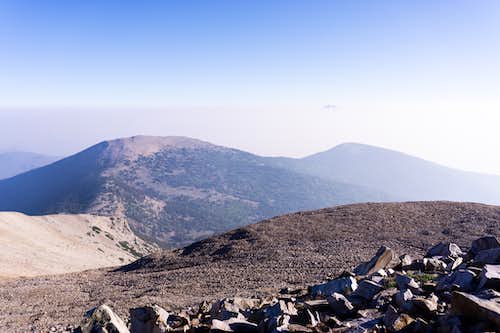 The trail then went toward the north and I could see that side of the mountain. Certainly many features were shrouded by the haze. 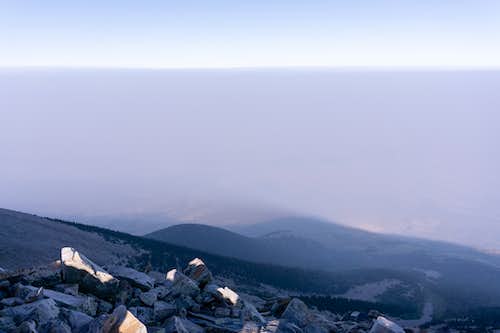 As was to be expected, the peak was close enough to touch it, but certainly more work was left to be done. Maybe 30- to 45-minute's worth. Perhaps longer. 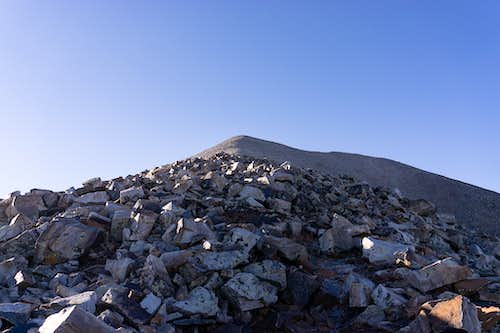 I began getting short of breath every five to ten steps. I stopped and rested. This must be the last 1,000 feet. Certainly there was something to the whole leaning over on your trekking poles or ice axe while facing the ground like I always see the high-altitude mountaineers doing. The position seemed to relax the torso such that the lungs can fill and distribute oxygen quickly. It was a pleasant feeling to continue pushing higher up while experiencing the faintest feelings of diziness as I had while getting up to Bonney Pass in The Winds. This had to be close to 13000' now. It would'nt be good to fall here, though it wasn't necessarily steep enough to have no chance. I looked down the rocky slope toward the massive headwall below James Davis peak. Cloaked in haze, the high vertical face seemed mysterious. 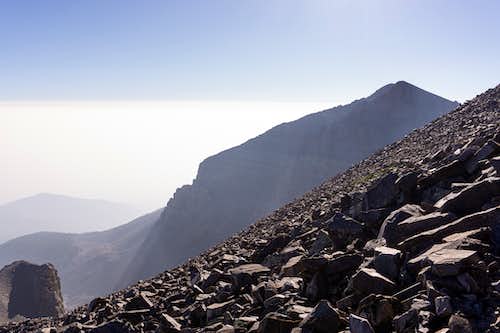 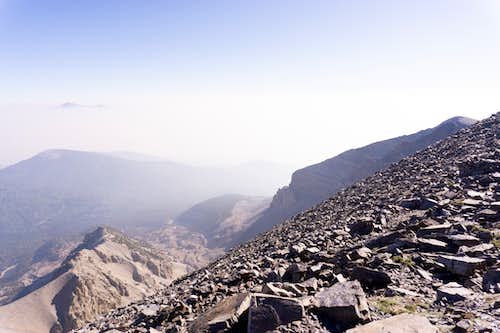 I looked down in the direction from which I'd come. Nobody else seemed to be on the mountain. Continuing, I saw something flapping up above. It was the Nevada state flag. 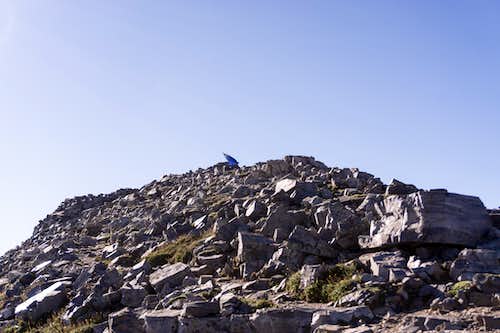 Soon I stood on the summit facing the northwest. It had taken just less than three hours. A cool, light breeze blew under a clear sky. 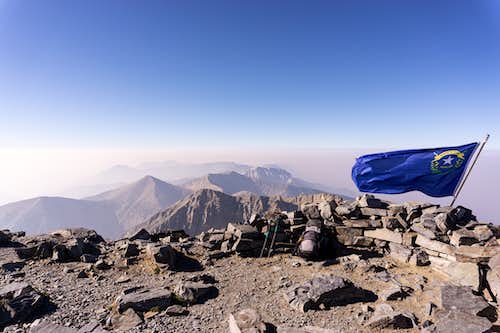 I took a number of pictures while having every intention of photographing the spires and faces between Jeff Davis Peak and the southwestern end of the mountaintop on which I stood, but I ended up distracted by someone who was now approaching the mountaintop. We got to talking, and then someone else arrived. Then a couple arrived and went in the direction I'd been meaning to go. 30 minutes went by and I only took a few more pictures before descending.

Looking northwest from the summit: 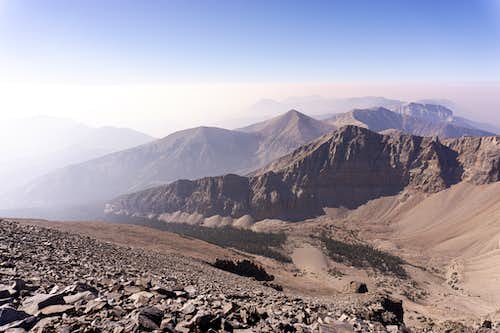 Also on the summit, looking down in the direction of the trail: 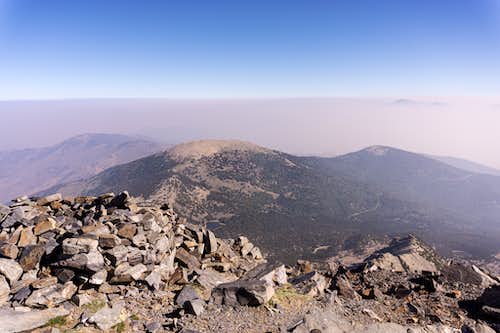 At approximately 09:30 I began descending with the first hiker/trail runner I'd met at the summit. We chatted a little before the trail leveled off more and he began jogging his way down. The couple I'd seen went by too in that same fashion. They'd all packed light and could easily prance down these easier parts of the trail.

The greatest challenge I faced during the descent was when crossing the aforementioned loose sections of trail. At a couple different points I hyperextended or almost hypderextended either knee.

The number of people now heading up the trail truly impressed me, especially since it was broad daylight with the sun high up in the sky. Some were struggling more than others. Upon reaching the foot of the mountain and getting onto the final mile-long stretch through the aspens, I estimated that 60 to 80 people were now up there. Wheeler Peak was much more popular than I expected.

I took a few breaks to snack and cool down my feet. Right at 5hrs, 45minutes I was back at the car, grateful for a change of clothes and shoes. The hike had been first-rate for a simple excursion up high that was easy to do in a day. I thought about how I once viewed Nevada as just one big flat desert. It is in fact one of the most mountainous states in the lower 48.

Now, where was the closest place to get some good coffee?

The number of people hiking this peak on a weekday seems insane, especially considering the smoke conditions.