There, where Snowy Bells ring... 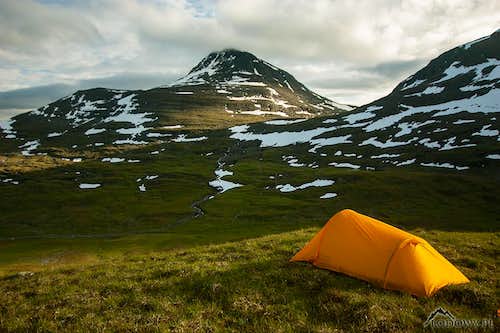 Where Snowy Bells ring...
One episode from the travel logbook, far far North...

On the first day of August 2012 I found myself hiking barren, rocky "fjell" highlands, slippery ravines, passing around a dozen of lakes in constant drizzle, heading blindly east as the path line chosen was hardly noticeable for most of the distance. The aim of the day was to get back to Kungsleden trail area again that would let me continue my long march(started in Kvikkjokk over a week earlier) in a bit more civilized conditions further to the North, not being in the best shape then after the heavy fall on swamps over Sitasjaure the day before and suffering severe pain around ribs which was impeding breathing and resulted in definite loss of joy from hiking.

The Valley of Thousand Reindeers

The day was depressively gloomy, even darker than the night before spent on glittering Kaisejaure lake waters. It was around 5 pm when I finally reached wide fields of grassy, mountain saddle with truly majestic, vast view to the East. Firstly toward "smoking" peaks of Kebnekaise massif, secondly toward endless, green prairie of Neasketvaggi valley - scratched with ribbons of countless streams, stretching out right below my feet. Looking further I was able to notice tiny points of Singi station huts somewhere above swamp areas on the horizon. As it couldn't have been that nice and easy of course, the whole pligrimage of heavy, dark clouds dragged themselves, following myself all the way to that beautiful place gifting a nasty rainstorm in final... Waiting. No place to hide anywhere around, getting a bit frustrated... and remaining so helpless I ensconced myself right over the steep threshold of the valley and just then, somewhere from among that whole greyness, from among curtain of raindrops, down there, some strange movement attracted my attention... What I noticed there was... five, ten, hundred, simply countless reindeers!... wandering across their summer pastures! Tremendous spectacle seemed like natural scenography straight from best western movie scenes, reminding me of those marching bisons from "Dancing with the Wolves"... I was absolutely shocked with that sudden impression. One just couldn't estimate where that huge swarm of animals begin and where it ends! It stopped raining quite quickly, warm sun began to disperse clouds and the first piece of blue sky emerged, while the revived light brightened up the whole valley, painted by long shadows of twin silhouettes of two big, rounded, nameless mountains spotted with snowfields, rising over in the southern ridge over the valley - mountains which my imagination named "bells", the big and the small one, ringing their melody with the wind of the neverending northern wilderness... It got so nice around that I decided to become a part of that delightful scenery stepping into that arctic, summer evening which never gets really dark, giving up today's plans of hiking down to Singi and eventually pitching my tent on a grassy terrace above the vast space of the valley. Wandering a bit later around the rocky ridge rising just above I took a glance deeply down to the neighbouring valley with one, huge, noisy waterfall encountering in the meantime several reindeer leaders of the countless herd I saw from the pass before, moving from one pasture area to another. Proud animals seemed to be absolutely surprised with the sight of a lonesome intruder in their deserted homeland. The bright, far northern, summer night went rather still. Luckily, nothing blew me out from my cosy terrace. Some strange moanings were hearable only, making me awaken twice maybe... having a quick look outside... reindeer army was simply encompassing the little piece of the slope I occupied descending back to the valley... 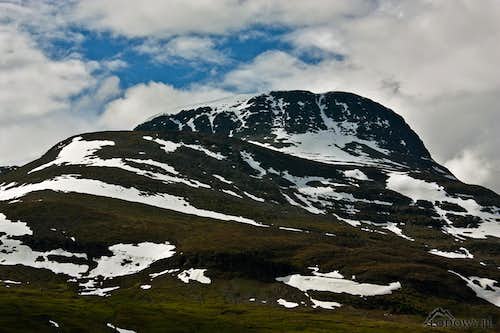 Morning time brought some rain showers, but the skies cleared up so fast and I was ready to go after 10am. Reindeers disappeared, pure silence prevailed all around along with bright sunshine, but the gusts attacking stronger and stronger from behind the nearby pass, from the west, have already forerun another weather breakdown so not lingering any longer I began to hike down in zigzags toward the bottom of the valley. Nothing simpler, the day seemed to start trivailly and who could have imagined that it will go that way for maybe a quarter of hour only... As coming down so lazily, step by step, losing altitude meter by meter, the idyll was suddenly interrupted by the view which just like some bomb alert knocked me down on the ground to the position guaranteeing good camouflage and staying unseen. Having my night-sleeping spot still right behind my back, looking straight down ahead on a swampy hollow with a snowfield my eyes met a sight of two furry, rather big-dog sized, very much characteristically shaped creatures frivolling and jauntily enjoying themselves. I was neither able to get control of my excitation nor to believe in my luck, reminding myself immediately about the camcorder I never use, buried somewhere on the bottom of my fat backpack. Hands are shaking, but I am filming... WOLVERINES!!! The old dream of discovering one of the most secret faces of Arctic wildlife, one of the most elusive creatures on the planet is just coming true right before my eyes, oh my God what an astonishing moment!
The beasts seemed not to acknowledge my presence or were not interestes, not mentioning so close neighbourhood between me and them through the whole night... They were just having truly good time, playing and gambolling happily, pelting themselves with wet snowballs made from the snow pulp of the snowfield which surface formed the roof of the ice cave carved out from below being their winter home. The characteristic light stripe embellishing dense, brown fur on both sides of the body, magnificent, bushy tail and those absolutely extraordinary faces, neither doggish nor wolfish or bear's ones. I took a bit more risk and tried to get to them for just a few steps closer, still hidden behind grassy hump. Having no idea how could they react on me observing them, I didn't find the courage for anymore, admiring jollities of Snowy Bells valley rulers for over three quarters of an hour to retreat silently and discreetly then, walking around the wolverine den in the safe distance and continuing my hike towards Singi with the heart filled with emotions and pure satisfaction of that unique morning encounter. 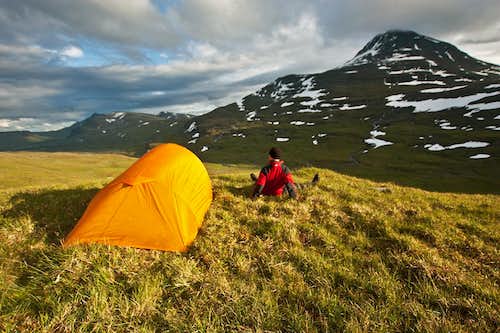 Encyclopedic note describing wolverine vel Gulo gulo - also referred to as glutton, carcajou, skunk bear, quickhatch or "the omnivorous one" - "Der Vielfraß" in German language countries - is full of curiosities..."Considering its appearance, wolverine has been recognised as close relative to dogs or bears for centuries. In many regions of the world it gained unrightfully bad reputation for its suppositious ferocity, aggression and strength out of proportion to its size, with the documented ability to kill prey many times exceeding its size. Bloodthirstiness..."
The loner, remarkably mobile and hard to observe. The largest weasel of the world, despite living in the far-northern climatic zone not hibernating through the wintertime. Swims and climbs rocks and trees excellently. [i]"Omnivorous - eating mostly carrion, but may also attack even large mammals like deers, elks or reindeers in harsh wintertime - catching them up in persistent, long-distance run in snow(...) The great strength, courage, agility and tenacity characterize the wolverine - there have been documented many cases of confrontation for a meat spoil between wolverine and much bigger and stronger predators such as American black bear, cougar or even wolfpack. Young and unexperienced wolverines sometimes get killed during those fights, but adult ones usually win such duels(!)."
According to some discussive historical references wolverines used to inhabit even north-eastern Poland area centuries ago.
It is most probably - the least researched species of large-sized land predators. Extremely hard to track.
Wolverine. Chasing the Phantom. 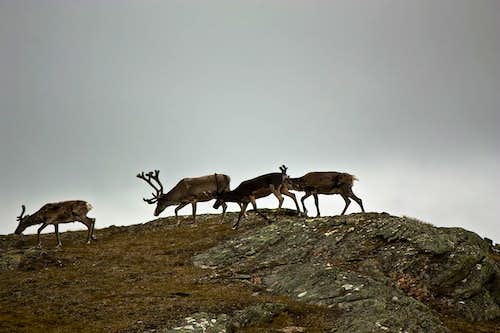 Reindeers on the ridge

thanks for the trip report - what a beautiful countryside and wow, reindeer and wolverines!

Glad you enjoy it! Heading back up North very soon again!