My plan for the solo week I was going to spend hiking in Eastern Sierra was simple: 8 summits in 7 days. Not any summits: Split, Middle Palisade, Whitney, Muir, Gibbs, Russell, White and Langley. For who doesn’t know, all of them but Gibbs (12,772 ft) are 14ers. That was a very ambitious plan. Not from a physical aspect but rather from a common sense point of view: I live at nearly zero elevation. What made me think I could just get off the airplane and go up to a fourteener, seven days in a row, I have no idea.


In 2013 I hiked Mount Whitney and a few 13ners and I probably thought that the altitude sickness medication I took works like a charm, showing the Nature how weak it is. In fact I forgot that in 2013 I acclimatized myself pretty nicely and carefully, along with getting the altitude medication.


At any rate, my plan to hike Split Mountain failed on its face when by mistake I got on the wrong trail on my way to the summit. Realizing the time was 9:30 AM and I was not nearly close to Red Lake, I decided to go to White Mountain (3rd highest mountain in Sierra after Whitney.) Heck, I thought to myself, I am not going to lose a day for this mix-up. I am going to do an "easy" hike to keep to the plan.

Drive to the trailhead

I ran down to the parking lot, drove to the main road (that drive in itself is an adventure on that disaster of a road), got to the Ancient Bristlecone Forest and from there I continued on the dirt road to the gate. Now let me explain for the wannabe White Mountain baggers. From Big Pine take Route 395 to Route 168 East. Drive up this road 13 miles until the sign for Ancient Bristlecone Forest will point to the left. This road is cleverly named White Mountain Road! Go up this road forever until reach the Visitor Center. Drive by the visitor center, continuing up the road which will suddenly turn from asphalt to dirt. From here, although a beautiful drive, it takes an hour, but it feels like forever, to the trail head. 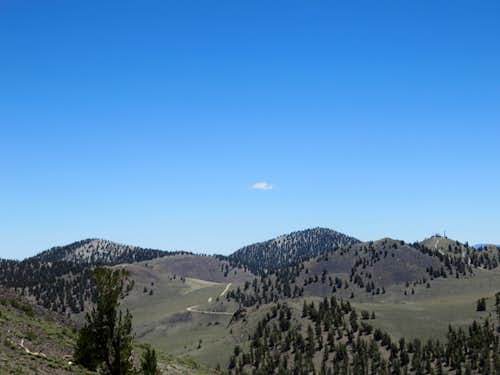 Road winding up to the trailhead of White Mountain

The road is wide and in good drivable conditions for any type of cars, but it is very bumpy and one cannot drive faster than 15 mph, if that. I drove a Jeep Patriot which is considered a midsize SUV. It was not fun. 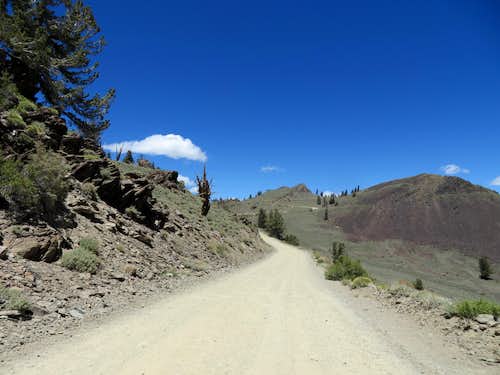 Road up to White Mountain

Driving up this road there I saw, as I thought it was, a white mountain. Not white because of snow but rather the color of the rock. Getting closer I noticed that the mountain was mostly yellow, but I really thought that was the White Mountain I was about to hike. It was not. 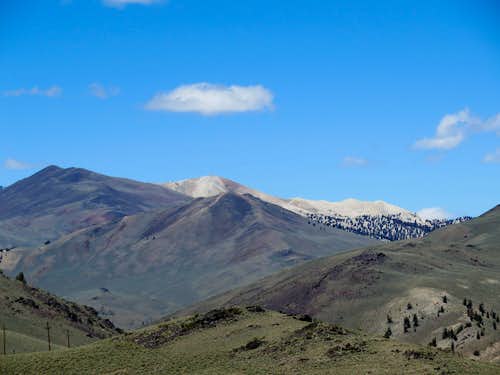 I drove past it an continued until there was a gate that blocked the road. That was the indication that I arrived at the “trailhead” of White Mountain which has in its very proximity a weather station (I think) called Barcroft Facility. 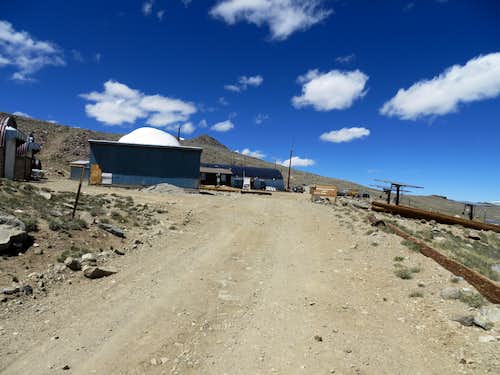 Probably the people of this weather station don't want to have to deal with hundreds of cars parked close to their living quarters therefore the parking area for hikers is located 2 miles down the road and the road is blocked by a gate. Everyone is welcome to go around the gate and hike the mountain, but only on foot or mountain bike. No cars.


I started my hike at 1:45 PM, eager to go up and down and grab my peak. As a reminder, there is no water anywhere here on this trail. I would certainly believe that if one is out of water, knocking at the station’s door he/she would receive water. But keep in mind that there is no water around this trail. I had with me 4 bottles of water (2 liters) and I drank 3 bottles. From the trail head to the summit it is a nice walk up the hill. The last mile and a half gets steeper and it doesn't feel like a walk-up anymore. The altitude was greeting me.


The road is open and the scenery beautiful. Without knowing, the altitude sickness sneaked up on me with every step I took. 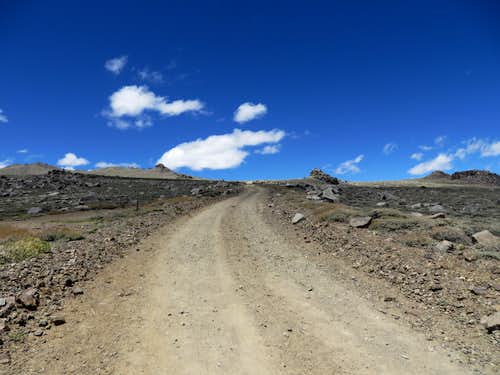 The hiking road to White Mountain 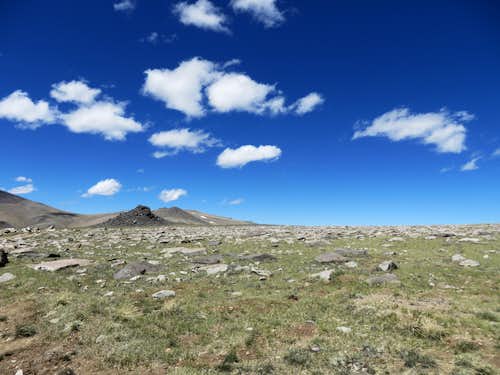 Between Barcroft station and White Mountain 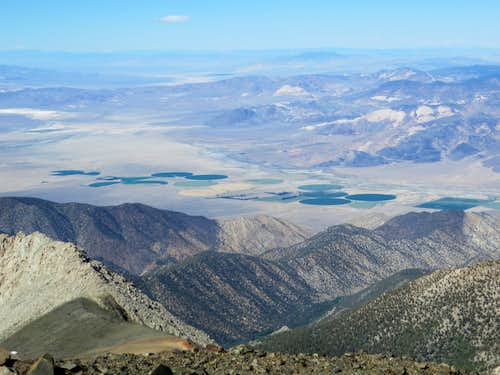 View from the trail


The hike up was very nice and at times very windy. One guy on a mountain bike passed me very shortly after I passed the weather station (2.5 miles into my hike). I could see him going, going, gone. The road is in such good shape for a mountain road that one would probably be able to drive a SUV at least half way up the distance. Going up I met two hikers going down. 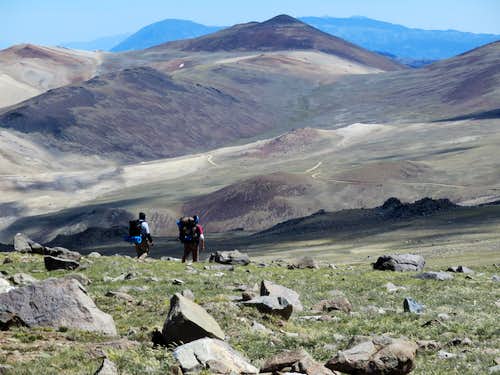 Hikers coming down from White Mountain
Then a couple that was very nice and with whom I talked a little. Than I met another couple where the guy seemed in the last stage of misery although he appeared having a very athletic build. Than an Asian looking guy going down on a bicycle. He told me that the next day he will go up to Mount Tyndall. Tough guy. These guys with their bikes were good; I was moving at a good pace but I don’t think I would have been able to bike up. Not at that elevation. I calculated there were 6.5 miles to the summit. I summit the mountain at 5:25PM. 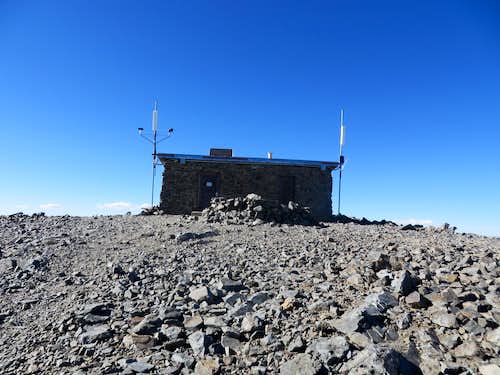 That is 3 hours and 40 minutes from the car. By that time in the afternoon there was nobody on the mountain. It was very windy at the top. I took some photos, sign the registry, looked around for maybe 20 minutes, and headed down. Going down I started feeling the altitude messing with my head. However it wasn’t only until about less than 3 miles to the car that my head starting hurting badly. The last 2 miles (from the station to the car) seemed a million miles. By the time I got to the car the Sun was almost set and my head felt like it was double in size. It was almost 8:30 PM. 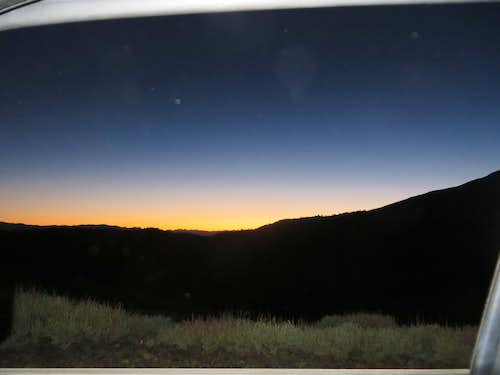 Sunset after coming down from White Mountain
I was glad I grabbed this peak but I was sorry I took it lightly. I knew that the next day I’d be recovering, therefore not being able to fulfill my plan of 8 mountains in 7 days.That next day would have been Middle Palisade. Next year maybe, I hope.

But that’s not all folks! Going down I knew of a shortcut from the White Mountain Road to Bishop named Silver Canyon Road. 15 miles versus 55 miles on the main road. Little did I know that this road is probably the most dangerous road I have ever driven. Nobody should take this road. It was an absolute pain. I have no idea how someone would drive up this road. Going down, the first 5-6 miles are absolutely horrendous (the incline is crazy steep, craters in the road a sedan would probably never get out of them, hairpin turns, high exposure). 2 mph speed is probably an exaggeration. At one point, in a hairpin left turn driving down, the back of the car slid to the right although I was barely moving. I grabbed the service brake and that stopped the car: I was a foot away from the edge. From mile 6 to 10 the road is bad but manageable. The last 5 miles to the main street is in good condition. There are also a bunch of water crossings but in an SUV that is not a big deal. From the car they seem scary but to me they were the least of my worries. I see how someone would get tricked into driving up this road believing it is a good option. That until reaching a point where is probably impossible to turn around. Time-wise it took me to drive down as much as it took me to drive up on the main access road by Ancient Bristlecone Forest. The Silver Canyon road is only 15 miles to Bishop, but there is no time savings. It would also be very dangerous if not impossible to drive, either up or down, in a sedan. From the White Mountain gate to Bishop it took me 2 hours.


I hope my trip report will help some hikers to be prepared for this hike. As some other guy said it, it is an easy hike but it is not. That’s exactly how I felt. Regardless, this is my 2nd 14er.

Heading up in a couple weeks as a prep hike for Whitney in July. Whitney will be from Horseshoe Meadow. We plan to drive Friday night from Bakersfield to the Barcroft gate and sleep to acclimate a little, then summit next morning. Hopefully avoiding the headache, Bakersfield is at 250'. Thanks again, especially for the shortcut warning! Scott