On August 31, 2014, my fiance Brett, my mom, and her boyfriend, Ron and I went up to White Mountain Peak with the goal of summiting. We chose this particular day because the hike would be about four miles shorter since they open up the gate and we had a three day weekend to do a camping trip. Fortunately, my mom and Ron were able to score a great campsite at the Grand View Campground. Grandview sits at 8,000' and is about an hour drive away from the gate that blocks off the trail head.
Brett and I left the Ventura area on Saturday morning at 9:30 am, made a detour to Schatt's Bakery for some good sandwiches, then headed up the road to Grand View. We arrived at 3:30 pm. That gave us about 12.5 hours to acclimate to the high altitude. Coming from sea level, I was a little concerned that we would not be able to make the summit just due to altitude sickness. Well, that plus the fact that Brett and I have been working crazy hours for the last six months and haven't been able to do too much exercise.
On Sunday the 31st, we left in Ron's truck for the trailhead and arrived about an hour later. Man, that road was bumpy! We saw a cool deer (I think--I don't claim to be a deer-pro) that had huge antlers on the way up. We got to the gate before it was opened. Thank God we arrived at the gate when we did because I was extremely nauseated. I ended up throwing up the moment I got out of the car. That didn't bode well for me because I realized that it was most likley due to the altitude. However, I felt fine other than the nausea, and once I yak'd, I felt a lot better. Anyway, I didn't have a headache so I figured I'd still give the hike a shot.
Once the gate was opened we drove (with about ten other cars) up to the research station. At the research station, there were some huts and a pen with sheep in it. 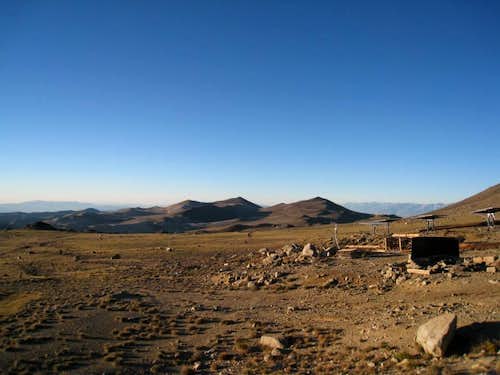 Part of the research station at the trail head
It was cold up there and the wind was blowing. It wasn't such a strong wind to knock you over or anything, but it was blowing hard enough to be uncomfortable. We started up the first part of the hike which led to a small observatory. Brett and I went pretty fast so my mom and Ron were left behind. We figured at that point we should let them know that we would go ahead and to just meet back up the car whenever that was. They arrived about 20 minutes after we got to the observatory and they were happy to tell us to go ahead.
The portion of the hike after the observatory is a gradual downhill, followed by a gradual uphill. 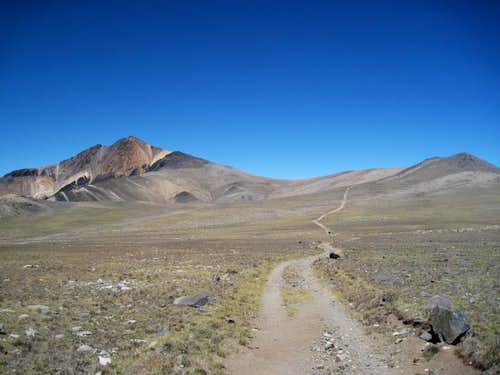 A view of the gradual incline with the summit in the background
The trail is very barren and exposed. The wind was so strong that despite the fact that it was a sunny day and most likley warm out, I never peeled off my shell or fleece jacket. I was also glad to be wearing two layers of pants. My mom and I agreed later that we never got hot on the hike, which was surprising. Anyway, the trail seems to go on for quite a while at a moderate slope until you get to "the slog." The slog is a steepish rocky downhill portion which leads to the switchbacks. 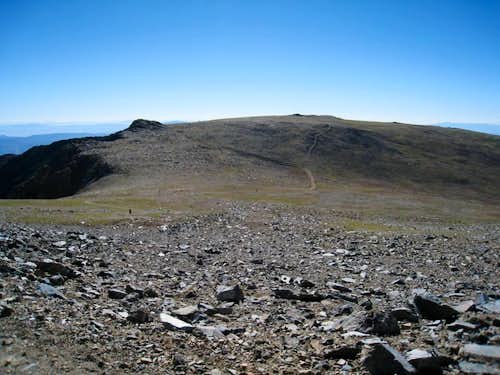 The Slog as seen from the switchbacks
I remember saying to Brett when we got to the slog that it would suck on the way out (IT DID). It's annoying because you lose a lot of the elevation that you gain on the first couple miles of the hike. The switchbacks weren't bad. They seemed to go on longer than expected because the summit looked so close.  Eventually, we got to the top. There were only about 15 people on the summit. The views were gorgeous! We were especially excited to see Boundary Peak (NV's highpoint) because we hiked it back in 2011. We still maintain that Boundary was the biggest slog of all slogs known to mankind. 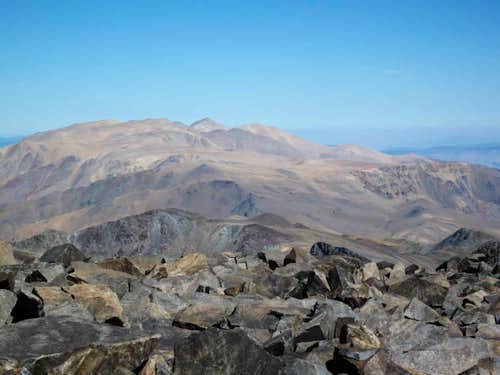 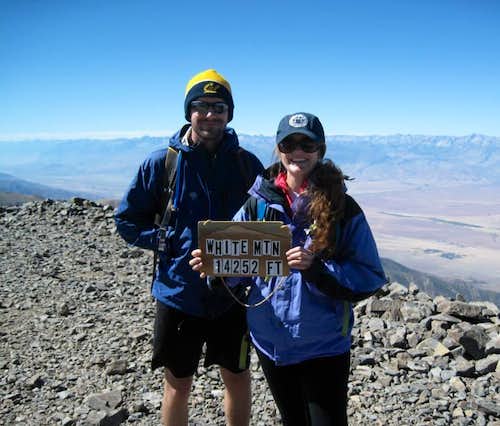 Brett and I on the summit
All in all, it took us 3 hours and 40 minutes to get to the summit. We don't pretend to be speed demons on our hikes so that was a really good time for us to cover the 5 miles up. We enjoyed the summit for about 15 minutes, then headed down. The switchbacks were easy coming down because we had gravity on our side. BUT THEN CAME THE SLOG. I was feeling great the entire hike until that point, but when that steep uphill started it seemed like I lost all of my steam. After that, the hike dragged on forever. We eventually ran into my mom and Ron, who both made it part way up the switchback area before turning around. We walked with them for a bit, but then decided to walk a little faster so we could get back to the car and lay down. The only other remarkable moment about the hike was the moderate uphill leading back to the observatory. I didn't really notice it on the way down, but since I was dragging on the way out it was annoying enough to remember. If I had to do anything different, I would bring more water because I finished the 2.5 liters that I brought at that point of the hike.
Overall, I would say that the hike was really neat heading up to the summit. For Labor Day, I was amazed that there weren't more people out there. There were a few brave souls who brought their mountain bikes, but from the look of it they had to push the bikes a lot of the way. On the way out, we came across a car that had shredded its tire. That was something I read about on Summit Post beforehand, and felt bad for the people. That night we camped again at Grand View. We were all pretty wiped out, but Ron made some great gourmet tacos on the stove and then we all retired into our tents. Unfortuntaely there was some sort of singing troupe that decided to belt out their tunes for the next two hours.
This was my third 14er and Brett's second. It was definitely the "easiest" compared with the other two I've done (Mt. Whitney and Mt. Elbert), but I still wouldn't call it easy. There is nothing technical about it so don't worry if you don't have technical experience.