I just moved up to Kalispell a few months ago and have been trying to get out as much as I can and bag peaks in glacier. Ive been wanting to do Wilbur ever since I saw a picture from the notch looking down at iceberg lake. Id heard that it was considered slightly technical and had some pretty bad rock-Like everything in glacier. I tried for a couple weeks to find a partner, but couldn't convince anyone to make the trek up here. So I decided to try and solo it. I read as much as I could on SP MP, but had trouble finding much beta on the routes. I opted to do "thin man's pleasure" because that seems to be the standard. So after a solid three hour drive around the park I arrived at many glacier hotel and started hiking on the swiftcuttent trail at about 8:00 am. From what id read online you follow the trail for about 1.5 miles and then cut to the right and leave the trail at readrock falls. Redrock lake is the first obvious lake you come to on the left hand side and the falls are on the far side (west) of the lake. 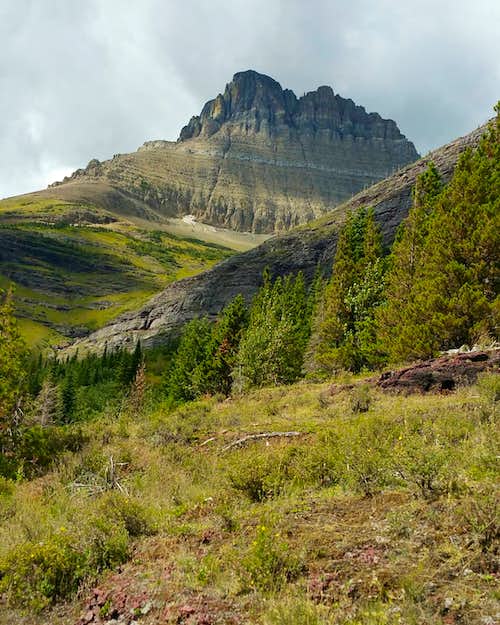 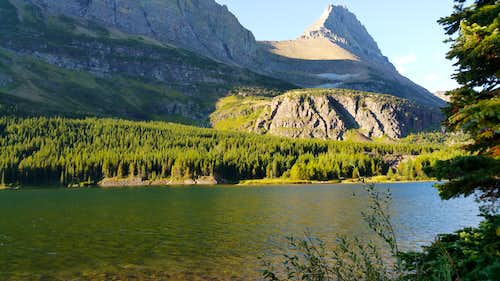 I cut off the trail at the end of the lake right before it turned sharply to the left and headed away from the mountain. I aimed for the drainage at the center of the picture above. This part was not fun. There was a variety of faint game climbers trails that I tried to follow, but it ended up being a lot of bush whacking through some seriously thick shrubs. This part was pretty scary because I couldn't see much and kept thinking I was gonna run straight into a grizzly. I had the bear spray in one hand the whole time and sang random song lyrics at the top of my lungs so I wouldn't suprise anything. At one point I broke out of the bushes into a small clearing and found myself about 10 yards away from a moose and calf. They just stared at me as I slowly backed away and headed further up the hill. I also saw a lot of bear crap and other little animals scurrying around. Damn theres a lot of animals in glacier.After a while bushwhacking I finally broke out of the bushes onto the grassy hillside. I headed left (west) and crossed the creek at the bottom of the drainage pictured above. 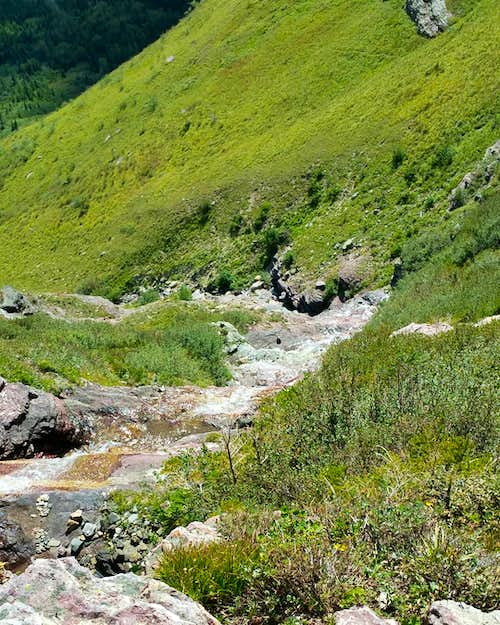 The stream in the east side of Wilbur

I worked my way up the grassy slopes to the left of the stream trying to avoid the cliff band and thick bushes. The grass was really slippery which made going kind of rough, but I found a few climbers/game trails that helped a bit. None of them went very far though. After about 1500 feet making my way up the slope it flattened out and I could see the rocky bowl at the base of the east face of mt Wilbur. 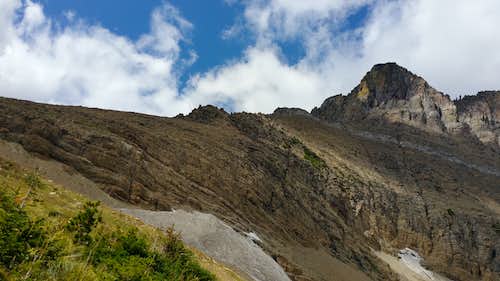 From here I made my way climbers left to the base of the ridge pictured above and started heading up. This part is pretty much just a scree slog where everything seems to be moving. There was a faint climbers trail that I tried to follow which helped a little. 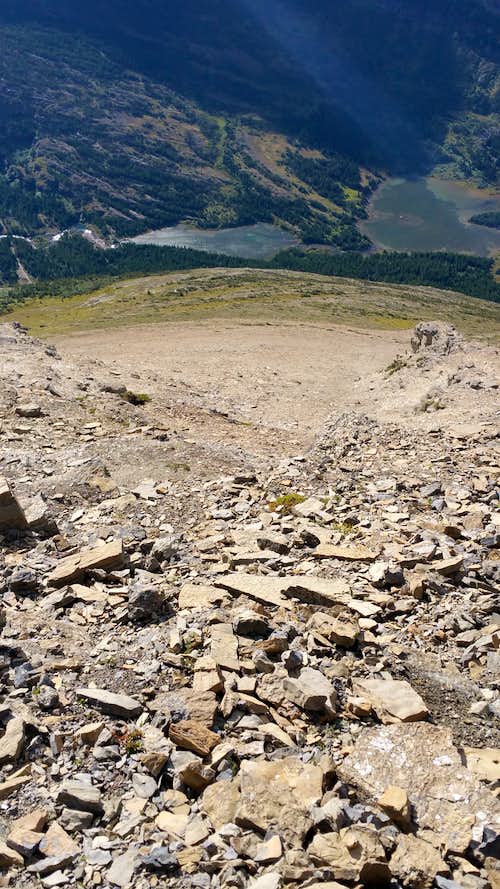 Looking down the ridge.

Once you get to the upper ridge it starts to get a little steeper. I cut the left to get around some cliffs on the crest of the ridge. This part is pretty straight foreward until you get to the base of a large cliff face that stands at the top of the ridge. From here as per the descriptions id read I cut climbers right and headed up the 3rd class gully to the right of the large cliff face. I headed up here about 100 feet to the base of a dark grey 4th class looking cliff band. I climbed up this angling slightly to the right. At the top of this there is a small scree ledge system which I went climbers right on. This turned out to be a mistake and I had to backtrack. You want to stay on the rock just to the right of the main gully until you get to a large ledge and the climbing above is obviously 5th class. 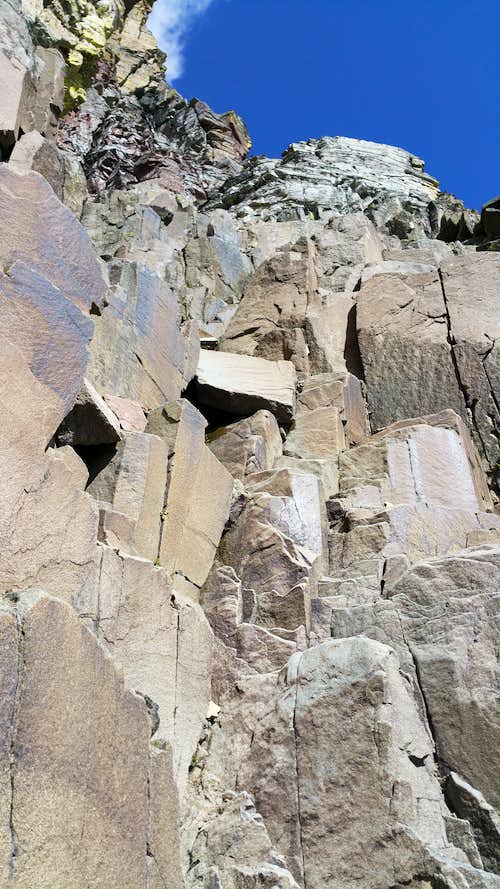 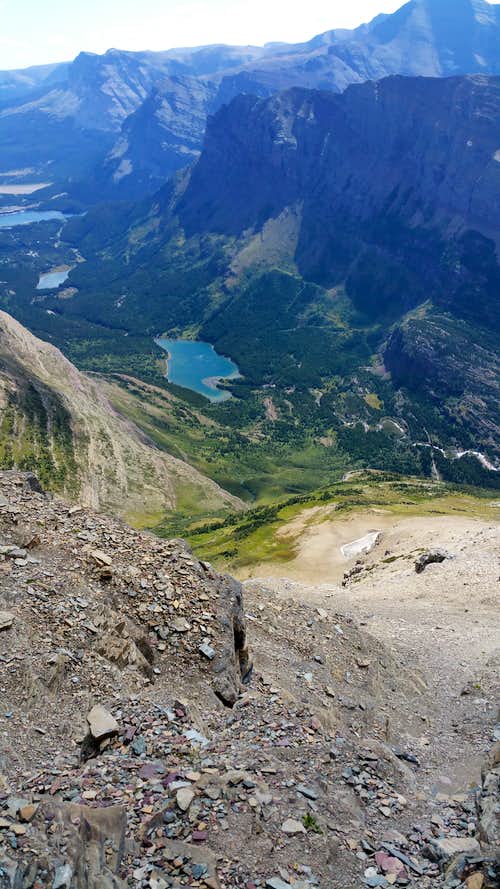 From here if you look left there is a steep mid 5th class looking and to the right more blocky low 5th class terrain. From here traverse climbers right on the ledge about 50 feet until you get to the base of a weakness in the cliff with a chockstone at the top. This is the namesake chimmney/hole for the "thin mans pleasure route."

Getting up to and through this is pretty straight foreward. There's a few low 5th class moves on the 80ish foot pitch up to the chimney . I had to take off my pack to get though the hole, but it wasn't too bad. The hole is wide enough that most people should be able to fit. After I got through this I continued straight up the scree filled gully for another 100 ft or so and then cut climbers right on a semi exposed ledge to the gully that I think is the chimney route. I did this because it allowed me to avoid the worst exposure that you get if you traverse right at the top of the "thin mans pleasure" gully. Going up the chimney was 5th class and semi-exposed, but nothing too bad 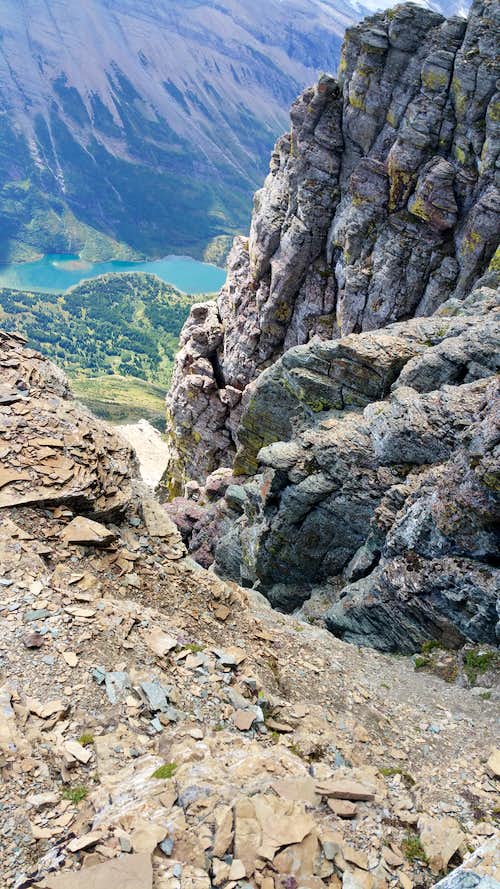 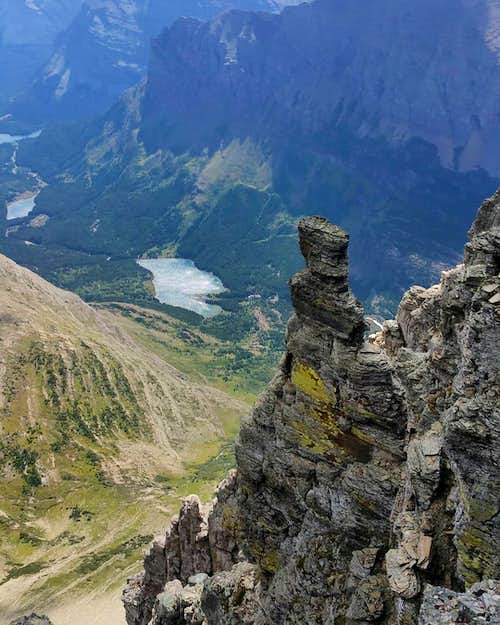 At the top of the chimney there is another scree covered ledge and a vertical cliff above. From here I traversed climbers right about 50 yards to the notch. There is a little 3rd class on this section, but a pretty good climbers trail and not too exposed. The notch is one of the more spectacular places ive ever been. That view of the iceberg lake circ is pretty incredible, but don't take my word for it. 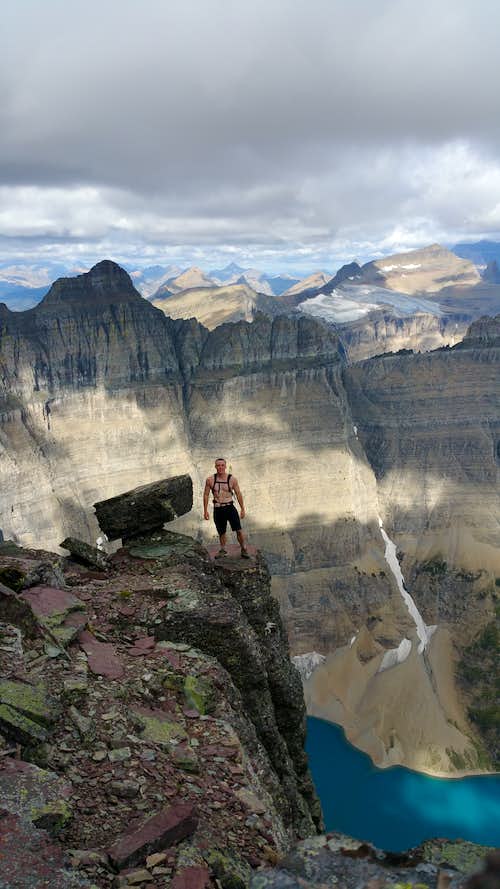 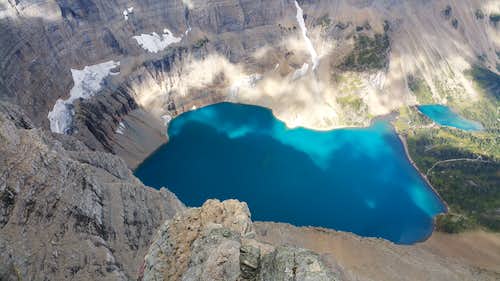 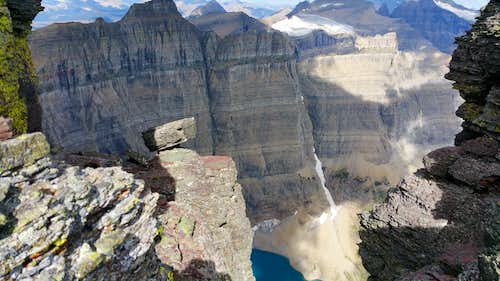 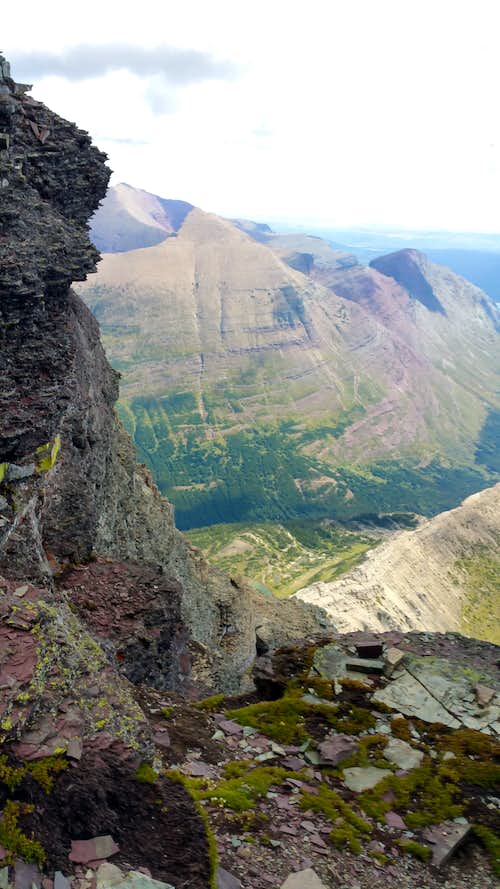 Looking back the otherside of the notch. Not quite as cool

I spent about 20 minutes trying to get a good self timer. I think it turned out pretty good. After from the notch you scramble back up climbers left to the summit. This is about 50 yards of 3rd and 4th class followed by a short walk to the true summit. 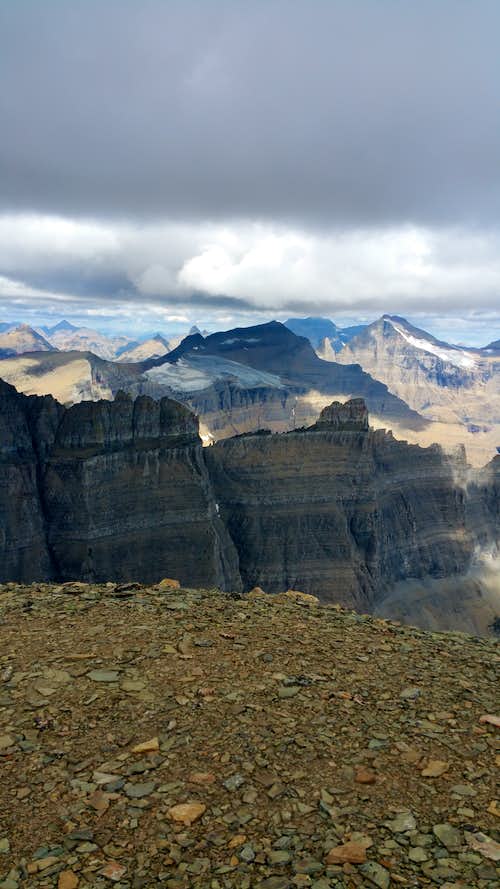 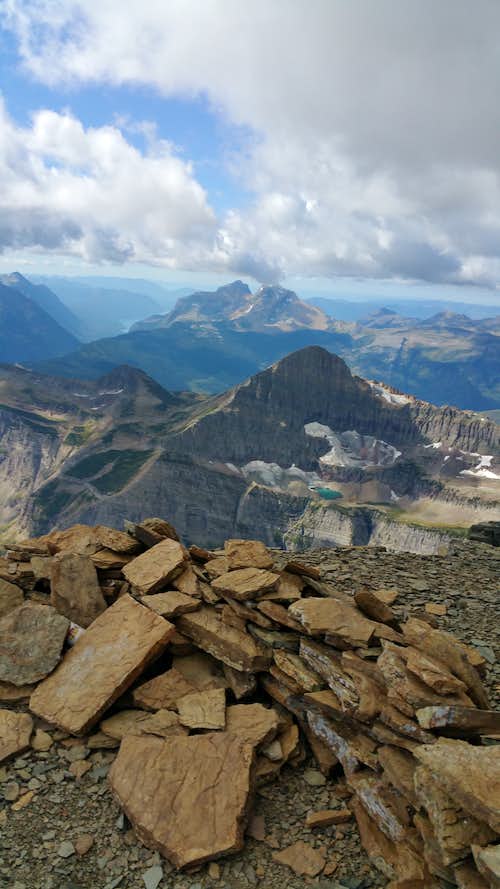 I took a few pics on the summit, but didn't stay very long because it looked like weather was moving in. Turned out to be nothing which was good. Definitely not a good place to be in a thunderstorm. On the way down I pretty much retraced my steps. This was a little rough mainly because when your going down the gully's its literally impossible not to send an avalanche of rocks down. I mean I'm usuall pretty good with that, but in a lot of spots there was just nothing solid to step on. I made sure yell down before I descended to make sure no one was below. Down climbing wasn't too bad. Just have to test all your holds. I don't know if it would really be worth bringing a rope. Didn't see much stuff solid enough to trust as an anchor. When I got below the technical section I ended up going too far to the skiiers right and ended up about a half mile north from the ridge I had come up. I thought about trying to go staight down this way, but wasn't sure exactly where the trail was on that side or if it cliffed out. So I traversed about half a mile skiiers left until I got back in the same drainage with the creek I had taked on the way up. For some reason on the way down I found the bushwhacking a lot worse. Also going down on the slick grass was awful. I probably fell on my ass at lease 20 times.I was kind of freaked about running into the moose again on the way down so I after I crossed the stream I stayed high a little longer before cutting down through the thick forest to the trail. From here it was just an easy walk back to the reailhead. 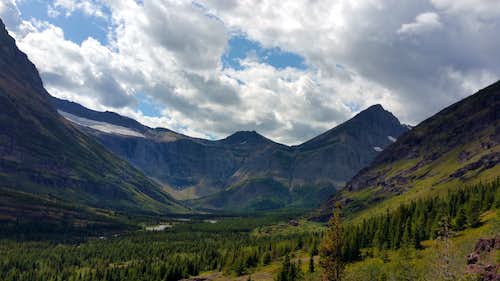 Looking up the valley on the way out. wilbur is out of the picture on the right

-Its about 4500 vertical most of it off trail

-It isn't too crazy as a solo. If your good with low 5th class with some exposure. Worst part is the terrible rock. Lots of exploding holds and a little natural rockfall

-I wouldn't want to be on this route with another party. Party caused rockfall is pretty much unavoidable on the way down.

-When your going up the technical section if it looks harder than low 5th class cut to the right and you'll find an easier way. This worked for me at least.

-Bear spray, make a lot of noise. Theres SO MUCH wildlife in glacier. Makes bushwhacking kind of sketchy.

And if your looking for a climbing partner hit me up. New to the area and looking for someone local to climb with!