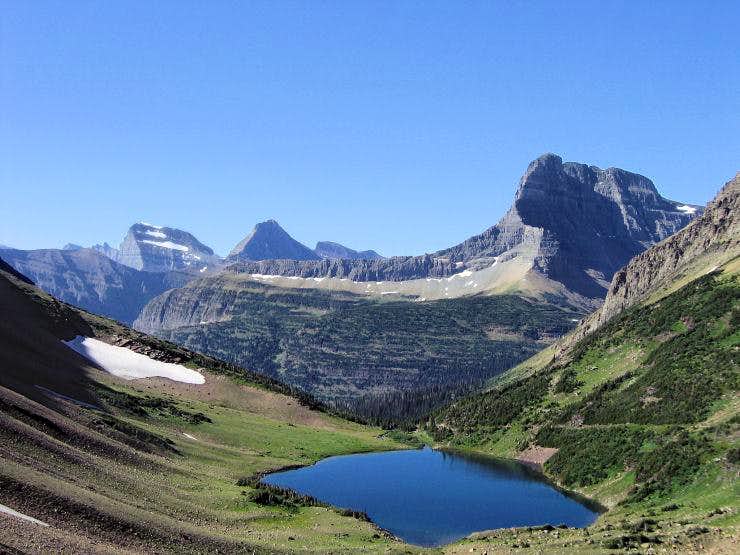 From right to left and front to back, picture taken from the Ptarmigan Tunnel, Mount Wilbur, Mount Grinnell, and Mount Gould (far left), with Ptarmigan Lake in front.
Photo by Vernon, July 20, 2005.
« PREV NEXT »

Your pictures are inspiring. I was there a couple of days ago but with my parents so I did not do any serious hiking. You, on the other hand, seem like you've gotten around in that beautiful place.

Last time I was up there, the weather had turned cloudy, there was a riderless horse near the lake, and there were no doors on the tunnel. Of course, that was Aug. 1968.
A Most enjoyable Image.

Re: Bernard I. Negrin

You might be interested to know that the Ptarmigan Tunnel doors were found to be necessary because snow packing into the tunnel never melted out--the tunnel was, essentially, blocked all year unless cleared via mechanical means. Now the doors are closed sometime in late fall, not to be opened until the following spring.

The Ptarmigan Tunnel to Ahern Pass goat trail is considered one of the great "hikes" on the North American Continent. It's certainly the best non-summiting outing I've ever done, and if the opportunity arises for you...don't hesitate, take it!

Thanks for the compliment; this is one time I had the common sense to just point and shoot--something not always a given with me.