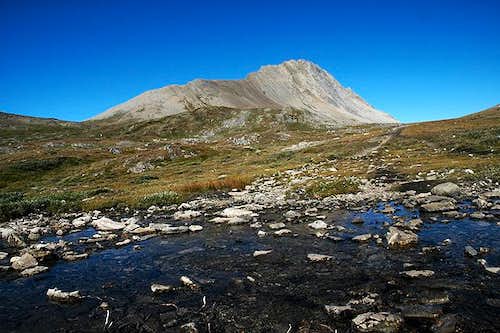 Although Mount Wilcox is a modest peak in terms of elevation compared to many of the peaks that surround it, its location and summit views make it a true gem of a scramble. In Scrambles of the Canadian Rockies, Alan Kane gives Mount Wilcox the enticing endorsement of offering “possibly the best view in the entire Rockies for the energy expended.” From Mount Wilcox, one can see Mount Athabasca, Mount Andromeda, Mount Kitchener, Nigel Peak, and the ever-famous Athabasca Glacier. 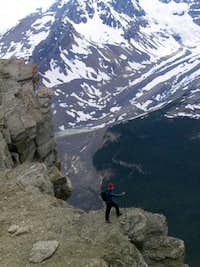 Mount Wilcox is located in the Sunwapta River Valley and is accessed by the Icefields Parkway (Highway 93) near the southern border of Jasper National Park - where Jasper connects with Banff National Park. Jasper is part of an interconnected seven mountain park system (along with Banff, Yoho, and Kootenay national parks and Mount Robson, Mount Assiniboine, and Hamber provincial parks), which has the designation of being a UNESCO World Heritage Site.

Mount Wilcox is named after Walter Wilcox, who along with Robert Barrett and guides Tom Lusk and Fred Stephens, were the first explorers to reach Sunwapta Pass in 1896. They were on a sixty day expedition in search of a pass through which the Athabasca River could be accessed. In 1896, the Athabasca Glacier actually extended to the steep western slopes of Mount Wilcox and although the party was able to navigate between the toe of the glacier and Mount Wilcox, they were eventually thwarted by a large canyon barring their way. They then proceeded over the high grassy pass east of Mount Wilcox, which now bears the name of Wilcox Pass. The Yellowhead Museum in Jasper credits the first acsent of Mount Wilcox to Robert Barrett and Walter Wilcox while they were on this expedition (1896).

Summiting Mount Wilcox requires a short scramble up its southeast ridge which will take between 3 ½ to 6 hours round trip, depending on whether you start from the Icefields Centre or the Wilcox Campground. The elevation gain is 900 meters or approximately 2950 feet. It’s common for climbers of Mount Wilcox to be treated to an abundant array of wildflowers along Wilcox Pass and sightings of bighorn sheep are quite common in the area.

If you are coming from the south, the turnoff for the Icefields Parkway (Highway 93) lies about 2 kilometers west of Lake Louise on the Number 1 (a.k.a. Trans-Canada) Highway. Alternatively, the turnoff is approximately 60 km west of the town of Banff or 185 km west of Calgary. Do not get confused and take the Highway 93 turnoff south into Kootenay National Park! Continue west for some time to get to the turnoff north. Once you are on the Icefields Parkway, the Icefields Centre is 127 km north on the right side of the road. It would be nearly impossible to miss.

Services are few on the Icefields Parkway. Ensure that you have an adequate amount of gas before venturing on to the Parkway. The few service stations that exist often charge a considerably higher amount for gas than those stations on less remote highways.

If you are coming from Jasper, the Icefields Centre is 103 km south on highway 93 on the left hand side.

For those intending to start their approach to Mount Wilcox on the more scenic Wilcox Pass hiking trail, the trailhead begins at the Wilcox Campground, which is situated 2.7 km south of the Icefields Centre. The majority of people climbing Mount Wilcox begin their outing from the Wilcox Campground. This is the same trailhead for those planning on climbing Nigel Peak.

A national park pass is required to enter the four Canadian Rocky Mountain national parks of Jasper, Banff, Yoho, and Kootenay (unless your purpose is simply driving through without stopping). Daily passes are available, however, if you plan on multiple visits to national parks within Canada in a year, or if your visit is for multiple days, an annual pass may become an economical alternative. Annual passes allow access into 27 of Canada’s 39 national parks. Anyone planning an overnight outing into the backcountry is required to buy a backcountry pass. Click here for a full list of daily and annual fees, camping fees, and backcountry pass fees.

The main season for climbing Mount Wilcox is from July to Mid-September. Climbing earlier than July should be done with great caution as winter conditions and spring avalanches can extend into the month of June. Indeed, snow and storms may occur in the summer months and weather should always be carefully considered and monitored when climbing in the area.

Winter ascents of Mount Wilcox are rare due to the extreme weather, snow, and avalanche conditions in the area. Even under favourable winter conditions, the exposure on the east slopes of Mount Wilcox is considerable as you near the summit; attempting to summit Mount Wilcox with snow on the mountain should only be considered by those who are fully knowledgeable of and properly equipped for winter climbing.

For those preferring the option of hostelling, there are many hostels in the area. Four hostels are situated on the Icefields Parkway with the closest being the HI – Beauty Creek Hostel, located 17 km north of the Icefields Centre on the west side of the highway. Other hostels are in the vicinity, including those in Lake Louise and Jasper. See the Hostelling International link below for a map showing all locations of hostels in the area.

Yet another unique option while staying in the Jasper area is to stay in one of the many private home accommodations in the town of Jasper. Numerous homes in Jasper are equipped with self-contained suites to accommodate guests. This can be an enjoyable and economical alterative to a hotel stay in the area.

Lastly, for those choosing a hotel or motel stay, the alternatives are endless in the Canmore, Banff, and Jasper areas. Expect to pay substantial prices during the summer season. If your budget is in the $200+ range, you can stay at the Icefields Chalet in the Icefields Centre.

The best source of information for hiking/climbing conditions in Jasper National Park is the Parks Canada Trail Office Line in Jasper (780-852-6177).