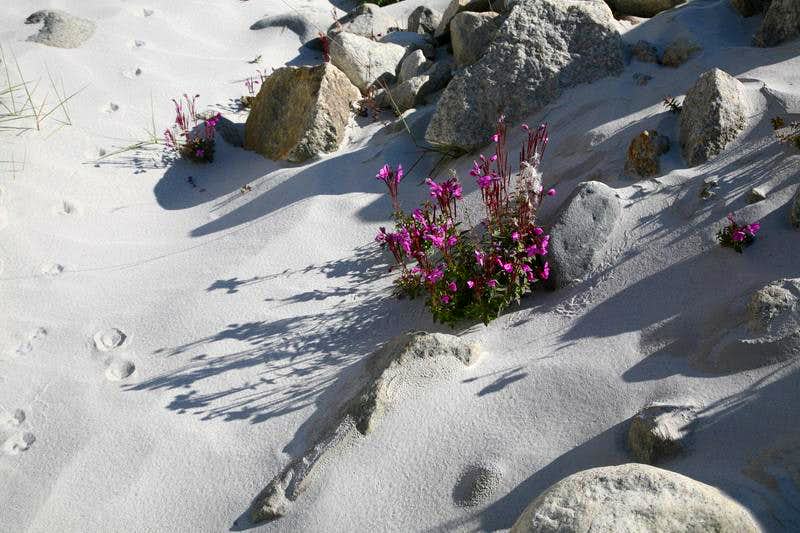 The Photo taken while trekking to Baltoro Glacier during the month of August 2007.
« PREV NEXT »

Fortunately a distinctive plant (close-up of flowers and foliage often needed) which I am familiar with, as only this distant shot shown - though a good image of habitat and habit (which fit with where I have seen it growing previously). Stewart, in his ‘An Annotated Catalogue of the Vascular Plants of Pakistan & Kashmir’ records this as gregarious by alpine watercourses at 2750-4850m in N.Pakistan & Kashmir. The Tibetan name for this translates into 'glacial stream flower'. This species is also found in N.America; I have seen this in Alaska, during a lecture tour, where it is known as 'River Beauty', though the forms I saw were slightly different to those I have seen in the borderlands of Tibet.

PLEASE, each time you post, provide an approximate elevation (exact not necessary), approximate location in terms of nearest village, pass, lake or whatever and DO ALSO photograph the leaves (foliage) as well as flowers - otherwise it can be IMPOSSIBLE to arrive at a definite identification. Ideally, take SEVERAL photos per specimen showing flowers (front and underneath), foliage (top surface and underneath), habitat shot and habit of plant - I realise this requires greater effort but once a methodical approach is adopted, it is straightforward to do and does not take that long (though hard-going at extreme elevations.....but having taken the time, effort and expense to get to these lovely places, worth getting the most out of it and helping the study of Pakistan flora); nowadays with digital cameras and small memory cards (which can accept large numbers of images) and small batteries, this can readily be done. When I began exploring the Himalaya in the 1980s, one used slide-film, which was expensive, so only 1 or 2 photos could be taken per plant and a tripod plus macro-lens was needed for close-up images of flowers. That has all changed. If anyone reading this is heading to the Himalaya in the coming years and would welcome further advice about securing a good set of images of the flora seen (sufficient to enable me to provide identifications), do get in touch. NO charge! Founder & Editor Himalayan Plant Association shpa.org.uk

FLORA IN THE HIGH MOUNTAINS OF PAKISTAN(Album)