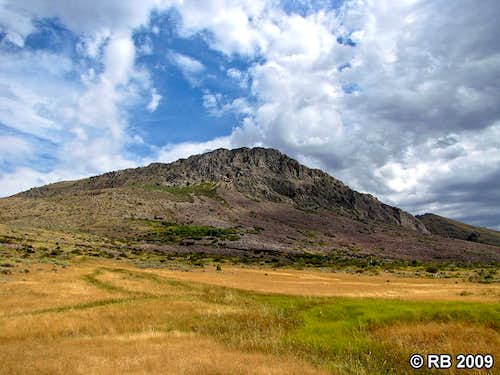 Wilson Peak, about 75 north of Elko Nevada was named in honor of Jimmie Wilson, one of the early settlers of the area. The peak is 2nd highest peak in the Bull Run mountain range with Porter Peak to the north being the highest at 9268'. The Bull Run Mountains run north-south for close to 25 miles, bounded to the north by the Owyhee River and to the south by Deep Creek. To the west is the popular Wilson Reservoir and to the east is the Bull Run Reservoir. Wilson Peak contains the sagebrush and steppe grasslands typical of the area, while just to the north forests of Aspen and Pine can be found.

It seems very few people have climbed Wilson Peak which is a bit surprising to me as the access is good (BLM land on the west side) and most routes from the west are non technical. With a prominence of over 2400', it ranks number 109 (peakbagger.com) on the list of Nevada Prominence peaks. The summit register indicated just a few people prior to our visit and one of the visitors was a miner we met on the road not far from where we parked who was actively working a mining claim. 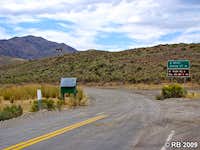 Ray Ray's pic of the junction


From Elko, head north on Nevada 225 for about 26 miles. Turn left onto Nevada 226 and continue on this road until you run out of pavement (another 39 miles) where 226 ends and county road 728 begins. Take the left fork, signed to Owyhee and Wilson Reservoir. The right fork is signed to Bull Run Reservoir and Mountain City. The good gravel dirt road you will be on has a junction to the Wilson Reservoir in roughly 6 miles. Continue straight ahead and watch for a dirt track that heads off to the right toward Wilson peak in about 2 miles. The correct road will lead to the switchbacking track that goes up the face of the mountain slope you will see directly to the east.

We went up on the west side by taking a mining road that is on the west side of the mountain. As this road starts to enter a canyon, take the branch that goes right and this becomes the one that switchbacks a couple times up the moutain to a good parking spot at the 7100' level.  At the time we were the,  the road is kept open  by a mining operation and requires 4WD & high clearance to deal with the steep parts and has a couple of hairpin turns that are a bit tricky for a tundra sized truck.  As I mentioned before, we parked at the top of the road just before it drops down at almost 7100' elevation. ( 41.6016 116.2044 ) We found a place to easily park two vehicles just above the road and from there we walked down the road and then followed it up as it passed through the mining operation and where another truck was parked. The road ends at that point and from there we found our way up the slopes to a saddle on the west side of the peak and then easy hiking to the summit where we found a glass jar register and a couple of benchmarks. Terrific views. If you can't make it up the road in a vehicle, no problem, just walk the road up from the base.
Summary Total Data: See Ken Jones GPS track at peakbagger.  When you look at that track, you won't see a road on the topo but thanks to the mining operation, it is now there.
Miles roundtrip: 3 miles  Elevation gain:  1700' (includes losses and regains) 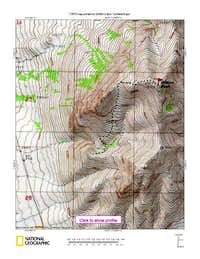 
We looked at the possiblility of finding a good route from the east side but every road that looked feasbile was blocked with a No Trespassing sign as all the land on the east side seemed to be privately owned. The best way we found was on the west side, as described in the "getting there" section above.


After driving up the steep 4WD road (several switchbacks)we found a place to park two vehicles just above the road (just before it drops down) at almost 7100' elevation. ( 41.6016 116.2044 ) and from there we walked down the road and then followed it up as it passed through the mining operation where another truck was parked. The road ends at that point and from there we found our way up the slopes to a saddle on the west side of the peak and then easy hiking to the summit where we found a glass jar register and a couple of benchmarks. Terrific views. If you can't make it up the road in a vehicle, no problem, just walk the road up from the base.


When to Climb & Weather

It would probably be possible to climb this mountain during any season. Winter might be possible when the weather was mild but a careful check of the weather conditions would be recommended. The distance to Elko is in the 75 miles range and the last ten miles of the road is on dirt surfaces which might become impassable in wet weather.

Bull Run reservoir (on the east side of Wilson Peak)

Wilson Reservoir Campground
For Wilson Reservoir:
To get there, turn off of CH-728 at the intersection 2 miles south of Wilson Peak. You’ll see the BLM sign at this intersection on the driving route to Wilson Peak. Drive about 11 miles northwest on the 4WD to the west side of Wilson Reservoir. The campground sits at 5,300 feet elevation. There are 15 campsites with tables and fire rings. There are also vault toilets, a dumping station, hand pump water, and a boat ramp on-site. Campsites are large enough to fit a travel trailer, although there are no hookups. The nightly camping fee is $4 per vehicle and the boat ramp fee is $2. Unfortunately, there are no trees in the area to provide shade. The campground should be accessible from late April through October.

It is also possible to park off the road and we chose the flat area just where the pavement ends and the CR 728 begins. Our site was large enough for 3 vehicles and we even had some local cattle come down to the fence nearby and seranade us a very moo-ful chorus. Dennis particularly enjoyed it.

Other possibilities:
It isn't necessary to camp out as this could easily be done as a day trip from Elko. Elko is about 70-75 driving miles south and Mountain City is about 27 driving miles north of the NV-226 terminus (Y-intersection). They are the closest communities offering food, lodging, and gas. (Oops, no gas in Mountain City but there is about 20 miles north in Idaho on the Duck Valley Indian reservation there) but Elko has a ton of choices. Just to the south of the NV-226/CH-723 junction is the Taylor Canyon Resort, where you can get a cold beer and a meal. Further south, at the NV-225/NV-226 junction, is the Lone Mountain Station Bar and Grill, where you can get the same, along with billiards and shuffleboard. I have eaten at this one twice and the hamburgers are good. While we were there, a customer hit a slot machine for over 200 bucks. 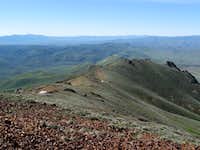 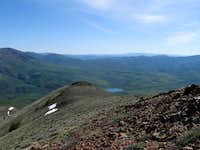 Not many visitors in the ten years since Gordon MacLeod placed the register.
To my knowledge, summit visitors are as follows:
2004 - Gordon MacLeod and Barbara Lilley
2006 - John Vitz
2007 - M. Evans
2013 - Ken Jones, Dennis Poulin and myself
2013 - Andy Martin and Mark Nichols (a month after we were there)

A summit register to me offers a bit of insight into how many people visit
the summit of the mountain and thus offers a bit of history. I hate it when people destroy them or take them. I often will carry a bottle and register with me just in case I don't find a register on the summit.