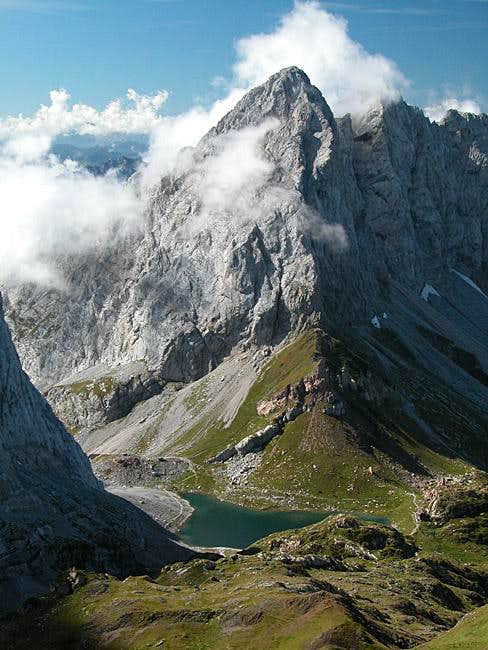 Wolayer See / Lago Volaia is one of the most beautiful mountain lakes in Carnic Alps. In addition to its value for mountaineering, we shall briefly describe this area in some other aspects, which result also in the fact that the lake and its surroundings are proclaimed as a natural reserve.

The lake lies on the altitude of 1951 m and has the area of some 4 hectares. Its deepest point is 14 m below the lake surface, but the majority of lake is less than 5 m deep. Surface temperature only hardly exceeds 12,5 degrees Celsius and more than half of a year the lake is frozen.

Wolayer See is situated in a valley which has a tectonic origin. Towards the east, the famous tectonic fault runs over Valentintoerl and further by the Valentin valley. During the last ice age (70.000 - 10.000 years ago) the valley was transformed by the ex Wolayer glacier, so the lake is what remained of it. The lake has no surface water inflow, but underground water inflow ensures a constant level of the lake surface. Water is flowing also out of the lake underground. One source is appearing on the southern side (on the other side of the Wolayer Pass), the other source is on the Austrian side, west of the lake.

The Wolayersee is the center of nature reserve, established in 1959. It covers 1939.4 hectares on Carnic main ridge west of the Ploecken Pass. In addition to the natural beauty, the area excells with geological importance and also flora and fauna are interesting. Originally, there were no fish in the lake, but after some trouts were introduced there, the ecological balance was disturbed and was later only hardly partially corrected.

The mountaineous area around Wolayer See is perfect for hiking, scrambling and climbing. The summits of Hohe Warte / Monte Coglians, 2780 m, Wolayer Seekopf / Monte Capolago, 2554 m, Rauchkofel, 2460 m, and other mountains east and west of the lake are perfect goals, able to fulfill any mountainineering wish. Even in winter and early spring time people are coming there, some saddles and also summits are great for tour skiing. The importance of the area is shown also in the fact that close to the lake two big mountain huts are standing, supporting outdoor activities. 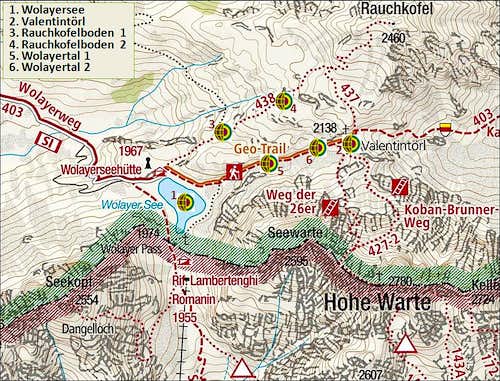 As most of the Carnic Alps main crest, also the area around Wolayer See is geologically characterized by Silurian and Devonian limestone, topped by Carboniferous slates. So, these sediment rocks were deposited in warm, shallow tropic seas in Paleozoic era, as much as 540 million years ago, till some 300 miilion years ago. The picture on the right shows the six eras of Paleozoic.

Being so old , and also so diverse, the whole Carnic main crest is geologically one of the most interesting areas in the Alps. That is why a lot of research is going on and along the crest there are several "Geo Trails". Actually the "Geopark Karnische Alpen" is broadened on the wider area around the valley of Gail/Zilja. In the area of Wolayer See, there are six so-called "Geotopes", points of high interest, which can be visited when hiking there around. Here is their brief description, their position is depicted on the left map:

The emerald eye of Carnic Alps. There diverse "geological worlds" meet. The high mountains on the east and west, built of ancient, 420-360 million years old Devonian limestone rocks, which were once even a coral reef with a rich wildlife. On the other side, on Rauchkofel, are red limestone shales and colorful limestones, which were once the habitat of ancestors of squids and were deposited in deep seas. In the rubble around the area, you can find also fossilized corals, crinoids, shells and snails. 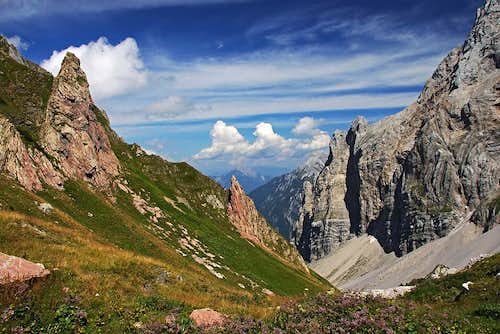 The famous saddle between Rauchkofel and Hohe Warte. Lies on a tectonic fault and offers fantastic views around. The rock of Toerlkopf divides it on the norhern and southern saddle. Three tectonic entities meet there. The southern slopes of Rauchkofel are built of younger, Carboniferous rocks (355-290 milion years old). On the northern saddle they border to the shales from the Ordovician era (510-440 million years old), which towards the south mix with Devonian limestones (410-360 million years old). Near the southern saddle, the shales and sandstones border to the high walls of Hohe Warte, built of the Devonian limestone.

Along the path from Wolayer See to the summit of Rauchkofel you can see limestones with embedded tiny plants. There the trail goes along red limestones, which were deposited in deep seas.

A bit higher of the previous Geotop there is a "graveyard of Orthoceras". These ancient animals could reach even the length of 9 m. Originally, they had a straight, cone-like housing, which only later, in the course of evolution began to curve into a spiral form. They lived in the Silurian era, 440-420 million years ago. In the Rauchkofelboden area they were unearthed during the First World War, when a communication trench was excavated. The fossilized housings are up to 1 meter long, lying in a predominant northeast-southwest direction, which indicates the prevailing ocean currents.

Between Valentintörl and Wolayersee the hiker passes a gray rock wall, painted with white digits. Those are marking points, where samples for laboratory tests were taken. The rocks with embedded fauna and flora from hundred millions of years ago help us understand how and when mountains were created. On this site, for example, a period of around 12 million years, is in the rocks represented with only 6.5 m thick rock layer. On the opposite cliff face of Seewarte, during the same time several hundred meters thick layers were formed.

The "Sea-lily Rock". In a bigger boulder you can see very nice examples of fossilized sea lilies, on which any museum would be proud of. The boulder fell down from the walls much higher on the mountain. Crinoids were particularly elegant creatures. Even if they resemble to plants, they are animals, and these ancient ones were big examples, living in shallow tropic seas.

The area of Wolayer See can be reached from three sides: 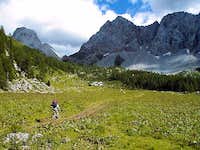 This is a very nice approach from the Austrian side. The route is all the time easy (T1), we can even take a mountain bike. But unless you are very fit, some sections will be too steep to ride up, and the rubble on the path too rough. 3 h.

Description. From Lesachtal we deter southwards in Birnbaum, driving till the parking place on 1200 m. After the flat beginning, the path soon starts to overcome the valley step in many turns. We pass a nice waterfall (Hildenfall, also one of the Geo points), if pushing a bike up, we only think on the joy when we shall be quickly riding down. On some 1650 m the steep section finally ends. We reached the nice pasture of Obere Wolayer Alm. Around it the mountains of Biegengebirge are arranged in a nice arc. Across the meadow we of course again proudly bike up, but soon we are below another steep section. Nice cart road crosses the slopes, does a few turns and above we soon reach the edge, beyond which there is the lake and mountain hut. 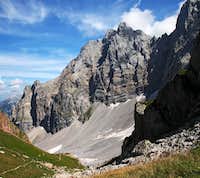 This is a very popular hike, which can be done almost any time of a year (also as a nice ski tour). It ascends by a wonderful high valley, above which we can all the time admire several hundred meters high, steep walls. The route passes Valentintoerl, and is all the time quite easy (T2). From the Untere Valentinalm we have 3 h 30 min till the lake.

Description. The road into Valentintal deters from the main road on Ploecken Pass soon after the military graveyard. By the road we can drive till Untere Valentinalm, 1205 m, an alpine pasture where a popular private hut stands. There the hike starts. At first we follow the mountain road, then the marked path (Karnische Hoehenweg) does a few shortcuts. Below the Obere Valentinalm the path leaves the road towards the right and does a longer shortcut, which soon brings us on the upper meadow, 1540 m. From there we continue in the same direction. At the end of the meadow, the valley starts turning towards the south-west. The slopes of Rauchkofel, all the time seen ahead of us, soon squeeze the valley also from the right, and the path starts climbing in more and more steep turns up across the slopes on the right. So we reach a picturesque valley-end. Left above us are the highest walls of Kellerspitzen. There the path turns in the western direction again and soon reaches the Valentintoerl. From it, we descend to the lake in good 20 minutes.

This is a popular and short approach from the southern side. The path is easy (T1) and takes only good 2 h.

Description. We start the tour on the big parking place at Rifugio Tolazzi, 1350 m. The path No. 144 goes by a broad valley always towards the north, avoiding, but time to time also joining the narrow supply road. We all the time go up in several turns, the scenery changes only a little, but the high walls on both sides and the more and more nice views towards the south are impressive. After reaching the water source, we are soon at the Rifugio Lambertenghi Romanin, and then over the saddle (Wolayer Pass, 1974 m) also by the lake. 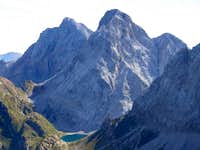 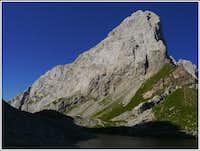 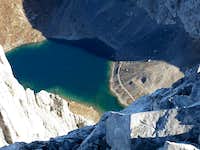 West of Wolayer Seekopf / Monte Capolago there is a long, bended crest of high summits, which are hardly reachable. A marked ascent goes from the south (but from the valley near Collina) only on Wolayer Kopf. 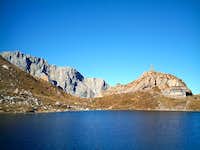 ganesh70 - Wolayerhuette
By the lake there are two mountain huts:

Rifugio Lambertenghi-Romanin, 1955 m. Stands south of the lake, just beyond the Wolayer Pass, 1974 m. It is opened from start of June till end of September and has 96 beds and 6 places in winter room. Tel.: 043372017. Reachable in 1 h 45 min from the parking place near Rifugio Tolazzi.

Wolayerseehuette, 1967 m. Stands on a picturesque place just above the NW shore of Wolayer See. Opened from June till start of October. Tel.: +43 (0)720 346141, the hut is run by the famous climber Helmut Ortner. Reachable in 3 h from the parking place in Wiolayertal and in 3 h 30 min through the Valentintal.

The area was proclaimed as a natural reserve in 1959.