One of the dominant peaks in the Goose Lake area of the Beartooths, Wolf Mountain is a fine mountaineering objective in a spectacular setting that includes one of the largest glaciers in the range and views of its highest peak. With a foot approach of over 10 miles, shortened to about 4 if one has the vehicle to handle a very rugged Jeep road, the peak is quite remote as well.

A true mountaineer's peak, Wolf goes at Class 3 at its easiest route, and that one likely involves moderate or steep snow as well, and there is at least one Class 5 route that has been done. The north and east faces present big granite walls up to 2000'.

From the Goose Lake area, especially from the ridge southeast of the lake, Wolf Mountain is incredibly striking and will provoke the desire of any true mountain climber. 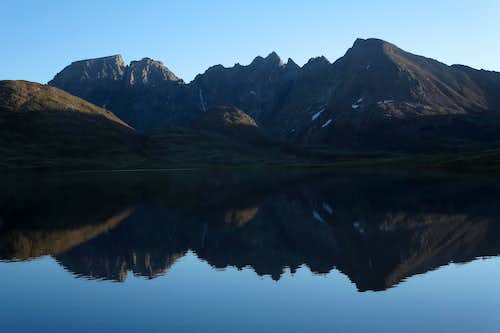 The source of the following information is the indispensable (and now out-of-print) Select Peaks of Greater Yellowstone, by Thomas Turiano.

Turiano speculates that the first to climb Wolf may have been prospectors enticed by the peak's beauty, and he also mentions that as early as 1899, Anders Wilse and A.B. Wood (respectively, a photographer and topographer whose names endure on Beartooth summits) had "visited" the Sawtooth peaks (which are harder to climb than Wolf is) and named Wolf "North Sawtooth," but he also adds that the first known ascent was in 1926 by-- surprise-- Norman Clyde, who reported finding no signs of prior human visitation to the summit.

Clyde, whose main (and successful) objective while out there was to complete the second ascent of Granite Peak, climbed Wolf from the Grasshopper Glacier to the notch that today's standard route reaches. His route was probably more difficult. Descending, he tried out, and found that it worked, the south couloir that is the majority of today's standard route after the end of the approach.

1960 saw the second known ascent, by Paul Ratte, who found a cairn close to the edge of the summit plateau, not the summit. Was this a cairn erected by Clyde as he prepared to descend an unknown side of the mountain? 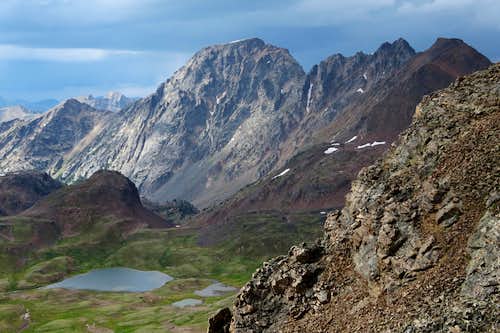 Today, the original summit register remains. Interestingly, the title page indicates a placement date of 1965, but the first page of entries begins with Ratte's 1960 ascent. Two pictures below show those pages.

Hardly bereft of entries, that register nevertheless is somewhat special. Considering that it was 50 years old when I saw and photographed it, one realizes there really are not that many entries overall. I felt honored to add my name among those of some of Greater Yellowstone's best mountaineers. 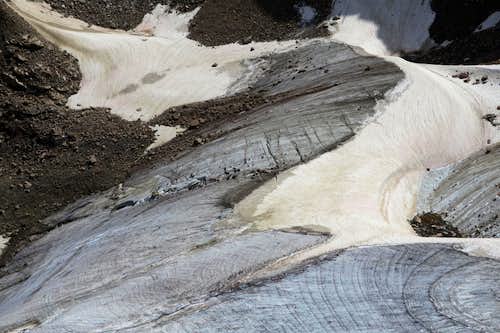 Shortly east of Cooke City, turn north onto a road signed for Lulu Pass. Drive nearly 3 miles to the intersection of the road to Lulu Pass (left) and the road to Goose Lake (right). There is some room to park here. If you do not have a true 4wd vehicle, preferably with skid plates, park.

Warning: this is a true 4wd road. I have seen stock Jeeps and SUVs make it, but I have also seen such vehicles limp back with leaking fluids. If you have really good clearance, rugged tires (i.e. BFG AT at least), and skid plates, go for it.

Chances are, if you are in really good shape, you can hike the road faster than you can drive it.

Starting from the end of the road makes the one-way distance 4-5 miles with a gain of about 4000'.

From road's end, hike the trail past Goose Lake. As the trail reaches the inlet of Little Goose Lake, cross the stream and hike cross-country to an obvious saddle. Descend past a tarn and then keep descending by following the drainage to the right of Incisor Lake. Don't, as the Turiano guide seems to suggest, go to Incisor Lake and then descend; that way appears to be needlessly harder.

After descending 1-1.5 mi (distance, not elevation-- elevation loss is about 800'), you reach a broad moraine below two couloirs that are so obvious that even a blind person could probably sense them. 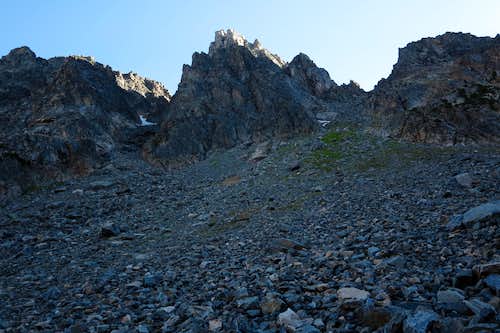 The left couloir will probably hold at least some snow all summer long. Having climbed it in a very dry year, I can say that you should hope for more snow, not less. There was very little snow in it when I climbed it, and the scree was pretty terrible. When I finally had the chance to get on snow, I took it. Even though it was more technical work climbing the snow, it beat the two steps forward, one step back nature of the scree. 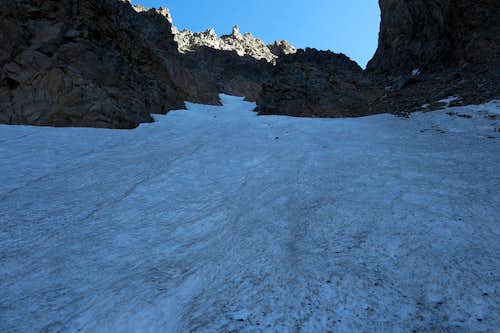 Atop the couloir is a notch with a view so rewarding that if not for the fact that a summit is not so far away, one might be happy to declare the day a success and head back. From the notch, head left up slabs into what Turiano calls a chimney but to me looks like a wide gully (nevertheless, the way to go is pretty apparent). 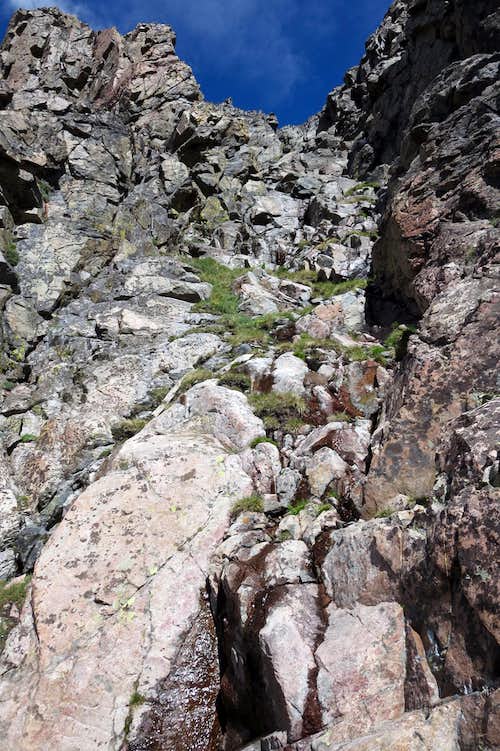 Up from the Notch

Climb this "chimney" (Class 3-4, probably wet in many spots) until you top out by a cairn on the summit ridge. Is this the same cairn that Ratte found? No way of knowing. But from the cairn, the rest of the way is easy and as obvious as a group of gym climbers on their first outdoor climb [noise, music playing from a portable speaker, groupspeak, fist-bumps, and assigning each climb a grade 2 or 3 higher than what the actual outdoor climbers (aka rock climbers) know is the truth]. 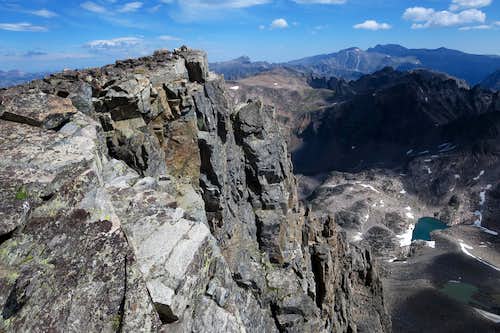 The views are [insert your synonym for spectacular]. Unless you don't like views with mountains in all directions and no human settlements in sight, you will probably be happy. 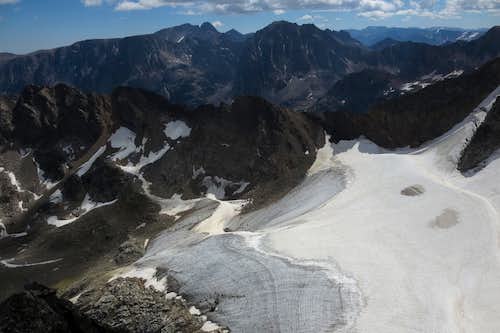 From Wolf Glacier to Granite Peak 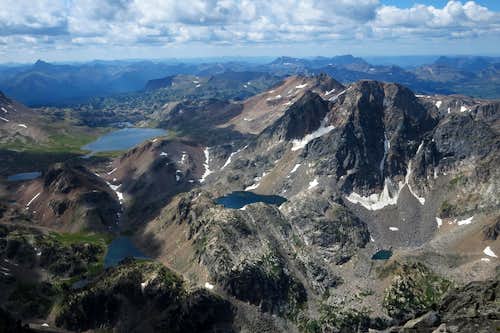 There are no fees or permits involved.

The alpine area around Goose Lake and the peaks is not prime grizzly territory, but all of Greater Yellowstone is bear country and most of it is grizzly country, so take the precautions that grizzly country dictates. Plus, the terrain around the access roads is prime grizzly habitat, and a fatal attack occurred at Soda Butte Campground in July 2010.

There aren't any campgrounds once you leave the paved road, but the Soda Butte and Colter sites are close. However, they are often closed because of bear activity or other reasons. Opportunities for dispersed camping along Goose Lake Road are legion. So are backcountry options in the basin.