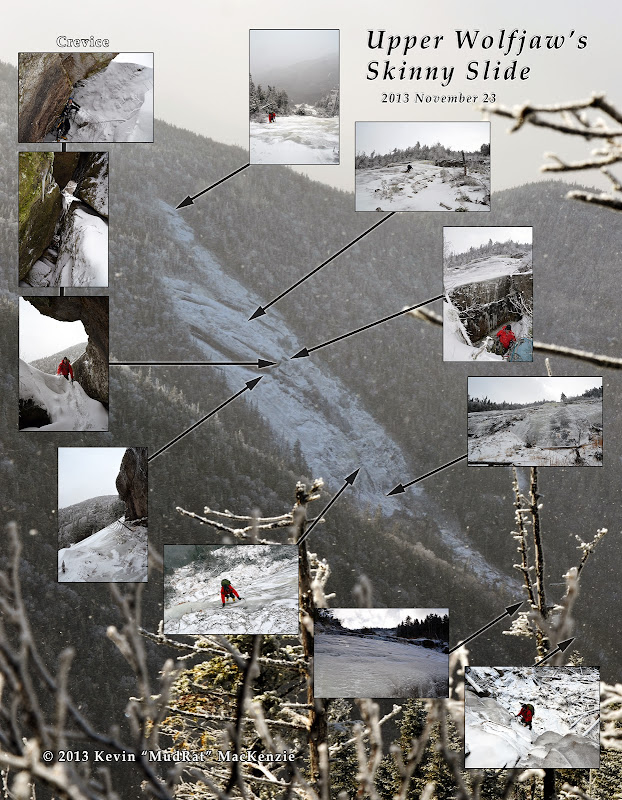 It’s been a month since I’ve been out banging around the backcountry. T'was high time to go do something exciting! Conditions were questionable, but I knew there had to be at least some decent ice at elevation. Scott and I conjured up an impromptu trip to Bennies Brook (Root Canal) Slide and threw in Upper Wolfjaw’s Skinny (not so skinny after Irene) Slide as a bonus. I can’t say either was in prime ice condition, but there was enough to keep it fun and interesting.

We left the Garden at 7:30 a.m. with little snow on the ground. The Southside Trail held a mixture of ice, running water and some mud. By the time we started up Bennies Brook ice and snow were a little more abundant. I needed only spikes up to the confluence of the tributaries. Scott bare-booted the entire way. The first run of ‘fun’ ice was at what is a near vertical chute of layered stone during the summer. By now the wind was blowing coldly up the slide.

We followed the thickest flows whenever possible...I hate sharpening crampons and axes. Some sections were barely covered in verglas and a more delicate touch was in order. Bennies is obviously one of the easier slides, but losing several hundred feet of elevation by falling down ice tiers would not leave you in a good state. Jim Close’s (NoTrace) words from long ago reverberated in my mind…”3 points of contact, maintain 3 points of contact!” The best lesson of the morning, however, was that I still needed to build my leg endurance for extended periods in the heavy mountaineering boots. 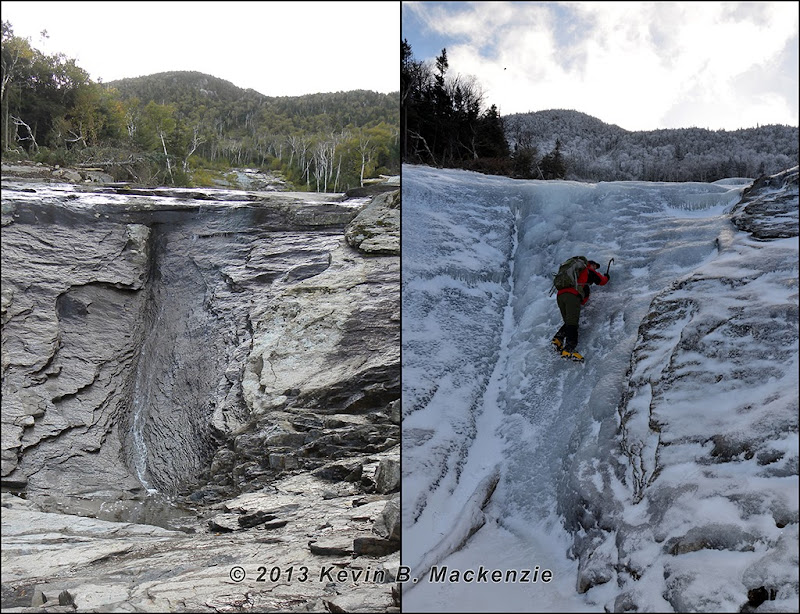 Scott climbing just before the convergence.

At the top of the slide I turned around to enjoy the spectacular view of the Brothers bathed in sunlight with a gentle snow falling on their slopes. The combination of light and moisture enunciated the soft morning colors.

Snow was still lacking once on the herdpath from the top of the slide though there was enough to capture the tracks of a snowshoe hare. We arrived at the summit around 11:45 a.m. and descended the icy path toward our next target on UWJ. 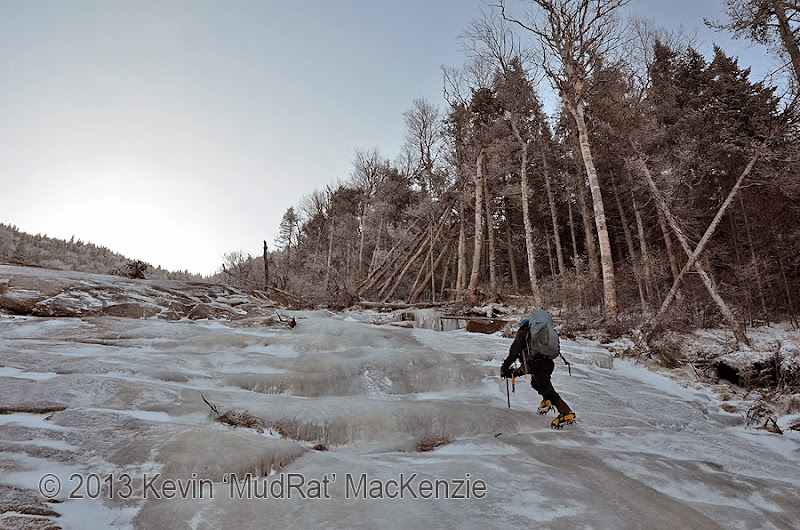 Kevin at the bottom of the new tributary...finally getting a little steeper. 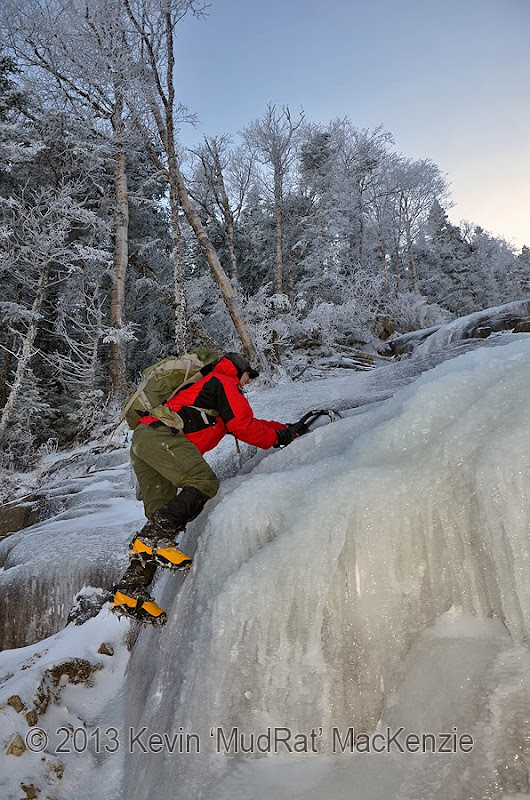 Better ice up a bit higher!

I climbed the old portion of this slide in 2009 and again about a year ago to see the changes from Irene. It’s an interesting track with some cool geologic features including a huge basaltic dike that crosses down low. A large crevice near the top of the new segment is the prize, however. I hoped the fracture wouldn’t be filled with ice and snow so we could wriggle through the corridor and climb out the top.

We reached the slide runout where it nearly reaches the path at an elevation of about 3,000 feet. Afterward, it was a rocky climb back up a few hundred (elevation) feet to an obvious choke point--a dramatic stack of boulders against a vertical ledge bleeding thick icicles. Just beyond, we donned crampons to climb the ledges leading to the lowest portion of the slide…a sub-slide if you will. The ledges were somewhat exposed, but the ice was thick enough to get some firm sticks…most of the time. The stepped ledges formed interesting tiers of ice. This preceded a hundred foot run of 35 degree ice. 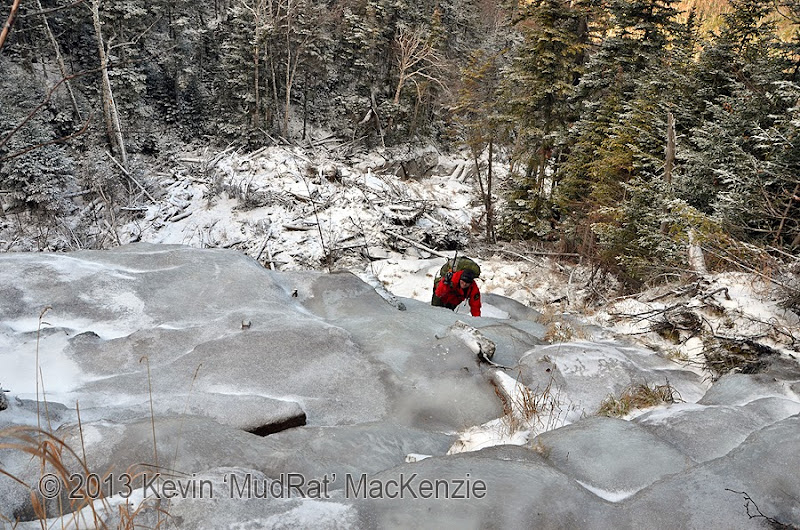 The fun begins at a nice ledge. 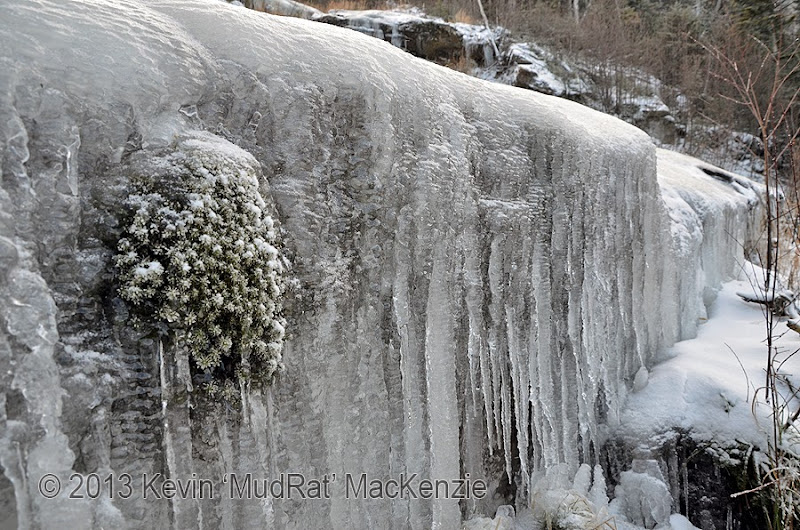 The real climbing, however, began at a steep footwall. The ice wasn’t thick enough on the 70 degree slope to climb unprotected (at least in our comfort zone) so we partially used a frozen ramp of sediment until coming to a run of thick ice. Thereafter we were exposed, but the footing was solid. 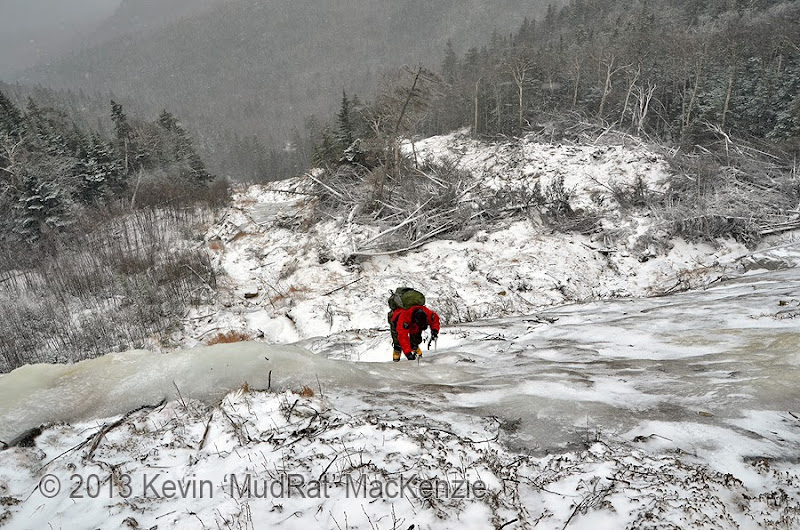 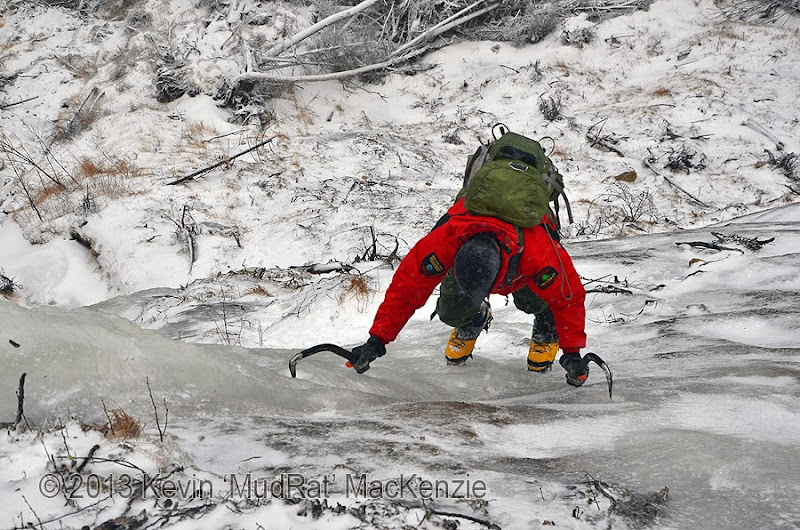 Scott on the footwall.

Unfortunately, the Irene enlargement was only covered with the thinnest veneer of frozen snow. Given that a slip would result in a long slide followed by being catapulted beyond the footwall onto the piles of trees, we stayed near the edge of the debris. A couple hundred feet up, a short run of ice led to the highlight of the slide…

A huge segment of slab assumedly moved by the slide event (See mosaic) marked the entrance to the crevice. A passageway roughly 30’ long leads between the dislodged stone and the slab that’s still in place. Partway through, the two touch at the top. At the far end, is an exit hole about 10 feet in diameter. You simply need to climb 10 or 12 feet to get out.

A large mound of consolidated snow blocked the entrance. Once over, I looked back at Scott following in my tracks.Overhead was a roof. Icicles hung from the wall a bit farther inside. Once I removed my pack to fit through the narrowest portion, a verglas coating on one wall helped me through. Once below the exit I threw my pack up on a shelf, hung my axes and photographed Scott coming toward me. Thereafter, I climbed up and out onto a mid-slide plateau. The view above was of the remainder of slides, though the Irene track ended much sooner than the old one. 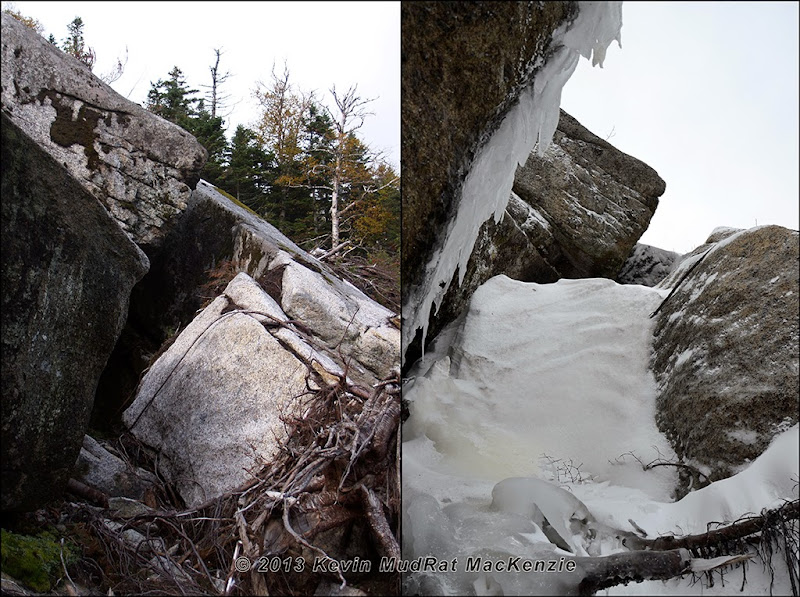 Comparative photo of the entrance to the crevice. 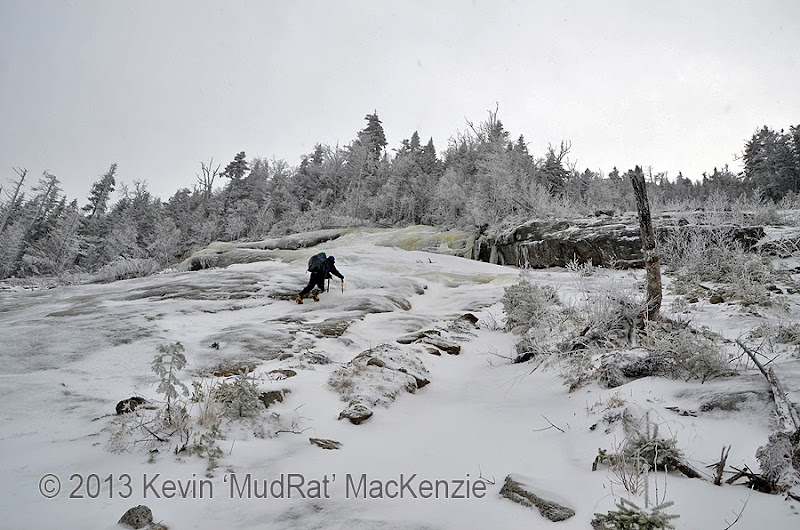 Once above the crevice, we climbed some good ice and walked over to the ‘Skinny’ track. Fifty foot sections of icewere protected below by pioneer trees growing in the cracks. By 2:00 p.m. we were sitting in the snow near the top soaking in the view as the snow fell gently around us. Lower Wolfjaw seemed like a ghost in the distance. The winds from earlier had abated.

We made a hard left from the slide top toward the Range Trail rather than bushwhacking to the summit. In less than 10 minutes we were descending the trail toward the saddle of Upper Wolfjaw. The walk out was req other than keeping our footing on the icy rocks while descending toward the Interior Outpost and then the Garden. Ten hours after our start, at 5:30 p.m., we finished the adventure. Another great day in the ‘Daks!

Footwall of the main slide. 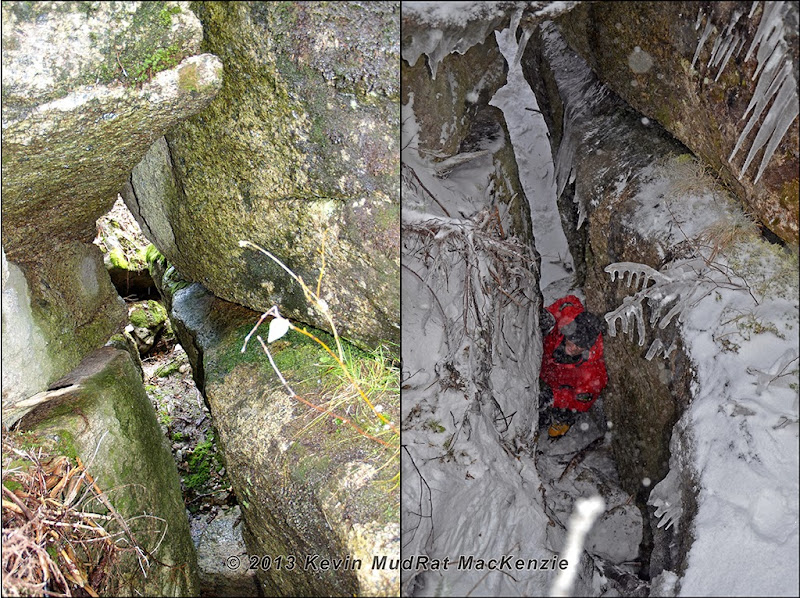 Looking down into the crevice from the exit.

Top of the new segment.

Thanks to you and your trip reports, I've got a finger on my keyboard hovering over the "Book" button for a flight to Albany!!!

But a stone's throw away from the 'Daks! Glad to have peaked your interest...no pun intended. Well maybe a little.

These slide climbs you guys do look insane, crazy East Coasters! Keep it up!

Still chuckling at your comment! We have fun on them for sure. Thanks.

saw you guys at the col.

I passed you guys heading through the wolfjaws col junction coming from armstrong,was wondering why ya had ice axes looks like an awesome climb on an awesome late fall day.

Re: saw you guys at the col.

Cool, thanks for replying! I was joking with Scott that we were a bit over-geared for just hiking on the trail.