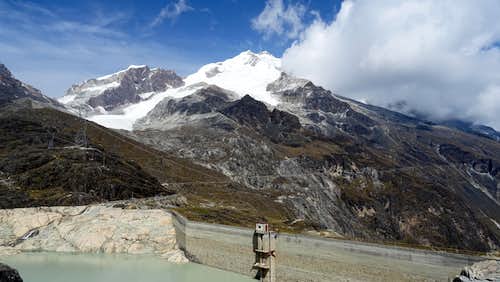 Over the last few months (Dec 2016 to Apr 2017) I have had the opportunity to climb a number of peaks in South America, four of them with the title 'world's easiest 6000 metre climb', these would be Huayna Potosi, Acotango, Uturuncu (all in Bolivia) and Chachani (Peru). In my opinion, I decided to list them in order of difficulty-
No. 1 Huayna Potosi (6088 m) from base camp (4750 m), 2 days to summit
Probably without doubt the most difficult of the four, there are two sections that are 45°+, one an ice climb, the other rock and there is a definite need for crampons and ice axe. There are also one or two bergschrunds that need to be navigated.
Climbing grade PD (slightly difficult)
No. 2 Chachani (6057 m) Cabrerias route, from Arequipa (2350 m), 3 days to summit. North Scree route, from pass (5050 m), 2 days to summit
Depending on what route you take. If it's via the Cabrerias route (i.e. from the south), then it's a tough hike. There's a basin between the (sort of) pass at 4830 metres and the high camp (due west) at Pampa Grande (approx. 4900 metres) which is pretty gnarly. You have a choice of more or less following the contour which takes you across loose scree at an angle, going in a straight line that takes you across a large boulder field or dropping down into the valley to avoid the boulder field, meaning you loose about 200 metres in height and climbing up (fairly) loose scree to Pampa Grande. If it's via the North scree route, then this is pretty straight forward and it's just the altitude to contend with. Cramptons and possibly an ice axe would be required for both routes throughout most of the year.
Climbing grade F (easy)
No 3 Acotango (6056 m) from Tambo Quemado (4380 m), 2 days to summit
Dirt road up to the ridge line at 5530 metres with traces of a dirt road up to approx. 5650 metres then path up to the summit. When I climbed, there was little to no snow on the route, when very close to the summit, there is an incline of about 45° made up of loose scree (presumably this would be covered with snow), this offered no purchase, fortunately there is a rocky outcrop to the left which allows you to climb the final section to the summit. If there was more snow, crampons would be necessary, probably no real need for an ice axe.
Climbing grade not known
No. 4 Uturuncu (6020 m) from Quetena Chico (4150 m), 2 days to summit
By far the easiest, not just because of the height  (note: most other sources say about 6008 metres) but because there is a dirt road that goes to 5500 metres with traces of the road going to 5770 metres in the 'saddle'. The last 250 metres are a straight forward climb to the summit with a little bit of snow. The only thing that makes Uturuncu difficult, is getting to Quetena Chico (the nearest village) which is pretty remote. I climbed this in February and I didn't put my fleece on until about 100 metres from the summit. A local pointed out something interesting that this may be due to the volcano still being semi-active (i.e. giving of heat). This would be plausible as there was sulphur vapour venting as I made the ascent and sometimes you could hear activity beneath the ground, especially in the saddle (this sounded like water that was being heated).
Climbing grade F (easy)
(It probably goes without saying but while all these are advertised as 'the easiest 6000 metre mountain', there is nothing easy about a 6000 metre climb. Relative to other 6000+ metre mountains, maybe but there is still high UV radiation, altitude/low oxygen (at approx. 5750 metres, there is 50% of the oxygen available at sea level), below freezing temperatures (normally), snow and possibly penitentes to deal with.)
Note: I also climbed Alto Toroni (5995 metres), Bolivia, and there is some debate as to it possibly being a 6000 metre mountain. If it is, then I would put this somewhere in the middle between Chachani Cabrerias route and Chachani North scree route.

Thanks for the info! I love to summit but kind of suck at it; Good to know there are notionally impressive but doable 18,000+ peaks out there. If I ever can talk my wife into a South American adventure....

Here are some more peaks that are sometimes claimed to be the world's easiest 6000 meter peak:

This claim has a lot of merit. A road (now usually blocked by rocks in places) ascends the mountain to 5800 meters. Some people even mountain bike it.

How about Aconcagua? I understand the standard route is a walk up. I know, easy for me to say from the climate controlled comfort of my house, but still, what do you think?