2015 has been an amazing year in the mountains for me.  I’ve been on some memorable trips with spectacular views and each time I think I’ve gone on the “hike of the year”, next week impresses even more!  I think part of it has been going early.  For the last few years I’ve been a get to the trailhead before sunrise kind of guy.  The morning is a magical place in the mountains.  I’ve got to witness some spectacular scenery that a few hours later in the day looks… ordinary.  This trip is a perfect example.

After a few taxing hikes I wanted to do something easy.  I had my eye on Wright Mountain, going up past Snow and Gem lakes in the Alpine Lakes Wilderness for a while and decided to give it a go.  Now 11 miles and around 3000 ft elevation gain might not sound easy, in fact my wife still referred to it as a “torture hike”, but it sounded like a perfect relaxing day in the mountains.  I got up early and hit the road, reaching the trailhead by sunrise (about 7).  The Alpental parking lot was filling up quick.  I grabbed my pack and headed to the trailhead.  There was a lone female hiker at the permit station waiting for someone.  I filled out my permit and hit the trail.  The forecast had been a little sketchy.  NOAA predicted 80% cloudiness at 5am and 30% cloudiness at 11am so I figured it would clear up at some point during the trip.  As I started up the trail it was overcast and drizzling slightly.  My feet felt great inside my boots with thick socks, warm cozy and dry.  The first part of the trail was dull partly due to the conditions, but I made my way up the switchbacks to the ridge crest.  This is where the magic began.

As I reached the ridge crest I experienced a first for me in the mountains.  The trail to Snow Lake was joined by another trail, and coming down that trail was an older Chinese couple.  As he trails merged, so did our paths.  What made out meeting interesting was that the woman was singing a song out loud in Chinese.  I was a hundred feet or so ahead of them on the trail, but they saw me and that didn’t seem to matter.  She continued to sing her song.  Her singing was pretty bad from a technical stand point, pitchy, all over the place, but the emotion and feeling behind it was soulful.  I quickened my pace slightly to keep a respectful distance but as we made our way down the switchbacks her song lingered until I reached Snow Lake basin. 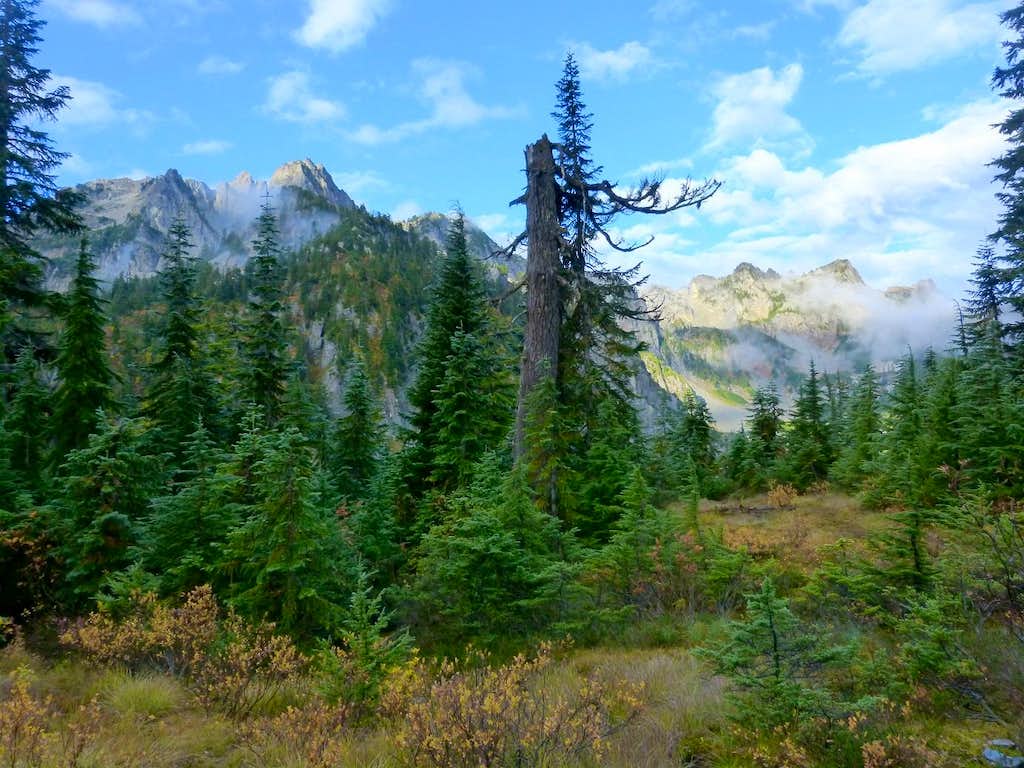 As I entered the basin the clouds were beginning to lift.  The morning light was just rising above the mountains and the tips of Chair Peak and Mount Roosevelt were illuminated in early morning light.  I continued on the trail until I reached the lake.  What I was about to see was one of the best lake views I have ever witnessed.  Snow Lake was calm.  Occasionally there was a slight breeze, but for the most part the lake was still and smooth.  This made for the most lovely reflection of the surrounding terrain.  When I arrived at the lake the peaks were mostly in shadow but as I looked around I could tell that the clouds would be clearing soon.  Almost like an answer to my request, the clouds began to clear within minutes and sunlight crept across the terrain cross the lake.  The early morning light and reflection in the still lake was breath taking!  I probably stayed there a good 20-30 minutes taking photos and taking in the magical moment.  If you've managed to read this far, check out the partial photosphere, it's even better!  Click here!  You can click and hold the mouse on the photosphere and drag it around to look around.  It's a pretty cool feature I intend to play around with more in the coming years.

The sunlight and lake reflection made the trip around the lake an enjoyable one.  Soon the trail headed up hill towards Gem Lake.  Views to the north and east soon came into view with mountain tops rising above a sea of clouds, another of my favorite types of mountain scenery!  That combined with views over towards Chair and Kaleetan and this section of trail was pretty fun!  I stopped at picturesque tarn to snap a few photos before continuing on.  I got to Gem Lake and immediately lost the trail so I dropped down to the lake its self and skirted the rocks around the lake until I saw the trail.  Gem Lake is pretty spectacular in its own right!  The lake wasn’t quite as still as Snow Lake, but still made for a beautiful scene and some great photos.  After some photo taking it was time to gain the summit of Wright Mountain.

I followed a trail west from Gem Lake.  When it became apparent the trail was not headed up Wright Mountain I took off uphill along the south ridge.  I glanced right and noticed a Pika investigating the noises it was hearing.  The little guy did not make a peep, and I tried to step softly as not to startle him/her.  The south ridge was pretty easy, just steep uphill through boulders and a couple thin forest sections.  Soon after I was at the summit and greeted by some amazing views!  Every direction was something to look at from Kaleetan and Roosevelt to the west to Price and Big Snow to the north east, the summit views were well worth the trip.  I spent about 50 minutes taking photos and admiring the views before heading back down.

On the way down I followed the trail down the east ridge back to Gem Lake where a young couple was setting up their camp.  As I continued towards Snow Lake I came across more and more people.  As I reached Snow Lake I was shocked how much the scenery had changed in the short four hours since I was there last.  No more reflection, the lake was wind blown with ripples.  The sun was much higher in the sky and the glare bleached out much of the view of Chair Peak.  I continued to run into more people and thought to myself how much these people missed out on the amazing morning views.  As I continued down the trail to the car the trail got extremely crowded.  I wouldn’t be surprised if I passed 200 people before finally reaching the car.  It was a great trip and for 11 miles, 3000 feet elevation gain I wasn’t even very tired and no muscle soreness at all the rest of the week.  For what I was looking for this trip was, in a word, perfect. 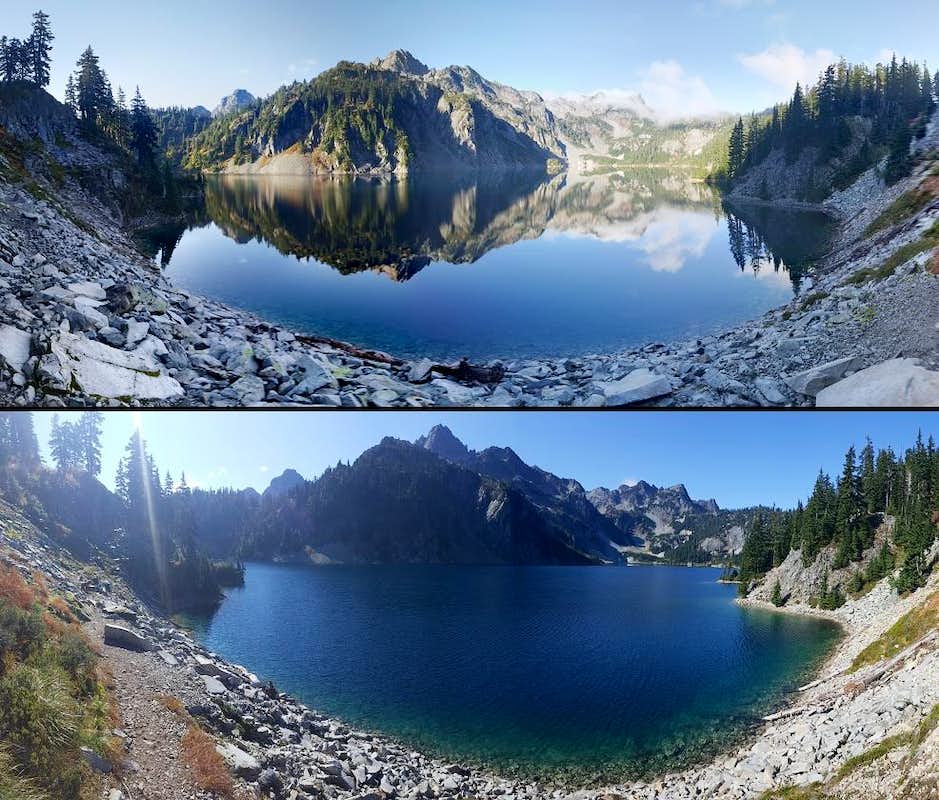 Great pics. Just did a week in Washington- Cascades, Olympic and Mt Rainier NP. It was epic!

Nice, I'm glad you were able to make it out here and had a good trip! Washington has so much to offer. Thanks for checking out the TR!

Did you ever talk to the Chinese couple? I was once on the summit of Wright at sunset--magical moment.

Re: Really nice pictures and story!

Nah, I didn't talk to them. I got the sense that her singing was some how religious or spiritual so I just let them have their solitude. It really is a nice area, isn't it!?