Usually used as the second part of the Snowdon Horseshoe and a descent from Snowdon the route offers a hugely enjoyable ascent of the mountain. Y Lliwedd is one of Wales iconic rock faces and although largely ignored by the climbing fraternity today, it was the birthplace of British rock climbing. This route is around 6km long, has around 950m of climb and takes the eastern ridge of the peak before descending into Bwlch y Saethau and ascending Snowdon via its South Face.

Owing to the popularity of the route the Pen y Pass car park often fills up quickly so if you want to park there a very early start is recommended. Luckily there are other options, the first of these is an excellent park and ride which runs regularly all day (including weekends and bank holidays) from Nant Perris (SH 607 582). The second option is the Snowdon Sherpa bus service which has various stops around the mountain and runs from Llanberis, Bettws y Coed, Caernarfon, Beddgelert, Bethesda and Porthmadog. Be sure to check timetables first as you don't want to end up missing the last bus and find yourself stuck, of course in these situations hitching is always an option. 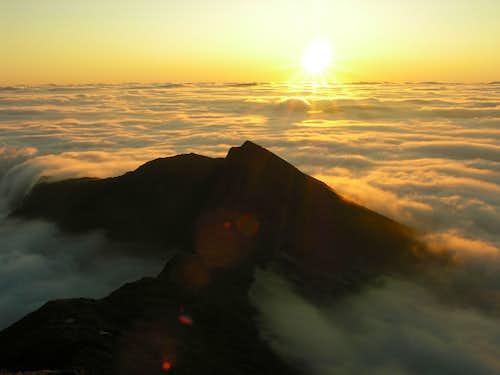 The route begins at the Pen y Pass car park (SH 647 555) and follows the Miners Track southwards past Llyn Teyrn to the causeway that crosses Llyn Llydaw (SH 634 545). Here it deviates southwards from the Miners Track crossing a metal footbridge and gently begins to ascend the eastern slopes of Y Lliwedd. Care is needed to keep to the more distinct path that takes the walker up the East Ridge rather than the less distinct path that heads in a more westerly direction and terminates at Lliwedd's precipices, which should only be attempted by experienced rock climbers. 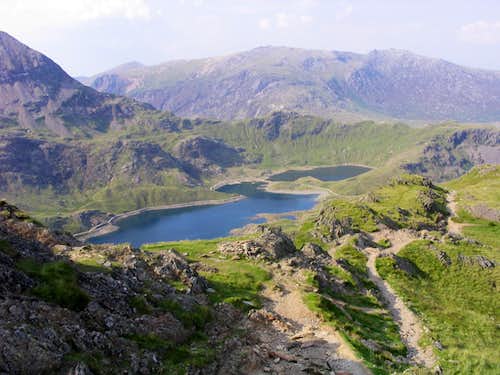 Looking down the lower section of the eastern slope

From here on the slope becomes steeper and rockier, passing through a col (SH 639 535) that separates Y Lliwedd from Gallt y Wenallt. Here the slope becomes even steeper and rockier turning the path into a Grade 1 scramble. The route closely follows the crest of the ridge to the East Summit (SH 623 532) where it traverses to the West Summit by crossing a slight depression before descending some 100m into Bwlch y Saethau (SH 615 540). From Bwlch y Saethau the route attacks Snowdon's summit via its south face. The south face is largely made up of loose rock and scree which has numerous paths zigzaging across it, this makes route finding in poor weather extremely difficult and the walker is best advised to take a quick bearing aiming-off onto the southern side of Bwlch Maen (SH 606 538) and then following the crest of the ridge northeast to the summit.

Just a good pair of boots, waterproofs and some lunch. If walking in winter make sure you also carry an ice axe and crampons.

The Mountains of England and Wales: Volume 1 Wales (Cicerone Guide) by John and Anne Nuttall 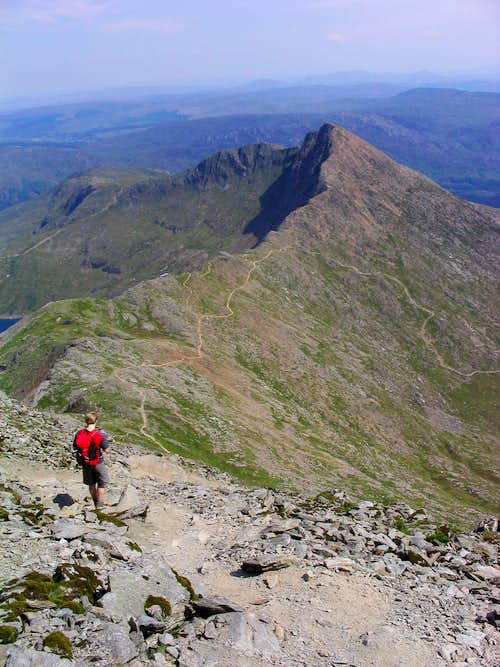 Royal Society for the Protection of Birds