Although Y Mountain does not have the elevation of nearby neighbors like Mount Timpanogos, Cascade Mountain, and Provo Peak, it is one of the most recognizable mountains in the Provo/Orem area. The concrete block Y is the symbol of Brigham Young University ("BYU"), and was supposed to be the center of a giant BYU at one time. But only the Y made it to completion, and the mountain got named. Notwithstanding its somewhat artificial name, Y Mountain towers 4,000 feet over Utah Valley, and is a delightful destination in any season. 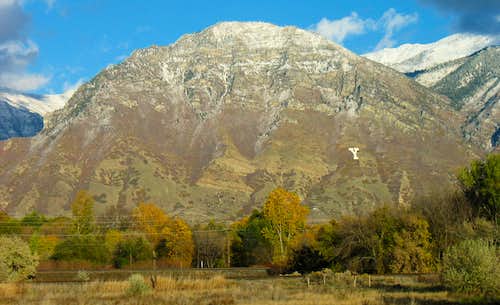 Y Mountain from I-15 freeway


Most hikers just make the short hike along the well-maintained trail up to the Y instead of going all the way to the summit, but both locations offer great views of Utah Valley. The area behind Y Mountain also features some beautiful fall colors during the months of September and October.

If driving from the north, take exit 269 from I-15. If coming from the south, take exit 265-A. Once in Provo, follow 820 North towards the mountain (eastward) from the southeast corner of BYU campus. After crossing 900 East You will pass a park on the left called Kiwanis Park. A short distance after the park, 820 North curves north and becomes Oakmont Lane. Take the first right, and then another quick right to get onto Oak Cliff Drive. At the top of this road, turn right yet again onto Terrace Drive, and follow the signs to the Y Mountain parking lot.

Continue east into the aspens. In late summer undergrowth can tower over you on this stretch--grass and mountain rhubarb. About 100 yards after you enter the aspens, start looking on the aspens for a "Y Trail" carving with an arrow. You may also find arrows or signs in magic marker. They will point left (north) into the bottom of the shallow drainage that cleaves the mountain into east/west hemispheres. Once you get into the drainage a distinct trail appears, then fades in the glades between the east and west summits. From here it's an easy pick-a-route to the summits (the east summit is the true summit, with great views of Rock Canyon and basin; the west summit gives an excellent vantage point of the city below). 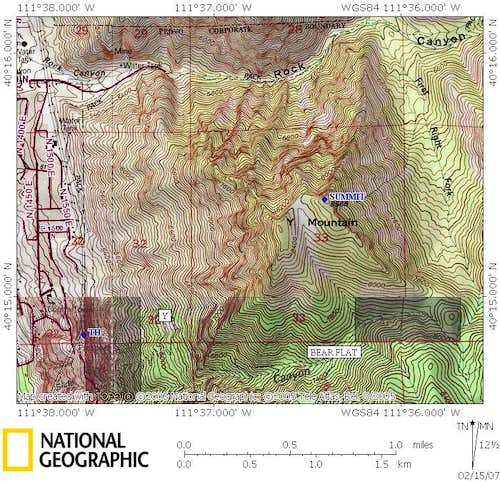 No permits required, no fees. Since the summit is lower than other well-known peaks in the area, this mountain can usually be hiked from April through October without having to worry about snow. Sometimes (especially during BYU Homecoming Week) the trail becomes extremely crowded, so plan accordingly. There is limited parking, but it is possible to park along the streets in the neighborhood below. Residents in the houses often complained of unprepared hikers asking to use the bathrooms in their houses for emergencies, but now there are restrooms at the Y Mountain parking lot.

No one really camps to do this hike because it is quite short, but nearby Rock Canyon Campground (north, by Squaw Peak) may be an option for those who feel so inclined.

"Take the left fork to wrap around behind Y Mountain and reach the summit from the east." Although, I technically agree with your words above, I think it would be worth mentioning that the east going bit of the hike is only perhaps a hundred yards. Essentially the mountain is climbed by ascending the valley to the south of the Y (named Slide Canyon) which you mention. Just as the trail basically plateaus in the south valley it veers left (north) and within maybe 20-30 yards it curves to the east (in a leftward direction). As you go east you very soon reach the top of Y Mountain. The trail never really warps around the back of the mountain as it climbs the valley, it's just that the last few yards to the peak have you walking to the west. If I had to guess, I'd say the hike is about 3.5 to 4 miles each way, and since it climbs 3,300 ft the time for a round trip will be about 4 to 5 hours.

Re: From the east?

Thanks vanman. The distance and elevation gain sound right on. I included the changes on the main page.

Left is north when you're walking east

From the article: "They will point left (south) into the bottom of the shallow drainage that cleaves the mountain into east/west hemispheres." You're sending people up the wrong mountain with that parenthetical statement... :-)

Re: Left is north when you're walking east

Good catch. I just changed it.