Yanapaccha is located near the head of Quebrada LLanganuco, not far from Pisco and Chacraraju. The name Yanapaccha means "black waterfall" in Quechua, although the usual west face route is anything but black. Perhaps the name relates to its appearance from the Portachuela Llanganuco, which would be the opposite face.

Brad Johnson, in his book "Classic Climbs of the Cordillera Blanca, Peru," states that "If Pisco were not in the Llanganuco Valley, Yanapaccha would certainly attract all the attention for a good acclimatization peak. Yanapaccha is only slightly lower than Pisco and moderately harder to climb. The view from its summit is one of the most spectacular found anywhere in the range. A great Outing." I would add that Yanapaccha could never draw the crowds that Pisco does because of its increased difficulty and because there is much less camping space at its base.

The lower portion of the glacier on Yanapaccha is a great area to learn and practice glacier skills and rope team procedure. The upper slopes of Yanapaccha are great for graduating from glacier walk-ups to peaks that require front-pointing and other steep-slope climbing techniques. The upper slopes of the west face involve extended climbing at about 50 to 60 degrees.

One approach begins at the last switchback (at about 4600 meters) on the road from Quebrada Llanganuco just before the long straight stretch leading to Portachuela Llanganuco. Climb over the guard rail and look for a faint trail contouring around to the right. The trail goes up and down a bit and occasionally is marked by cairns. After rounding a ridge and gradually rising a bit you will come to a wide ravine with a stream or two and high grass. Turn and head up the ravine to an area near its head where you will find the trail again on the opposite side of the ravine. This trail will lead to a stream flowing from a lake above. Cross the stream and go around the lake to a somewhat level rocky and sometimes muddy area above it where you can set up camp (Lat/Lon: 9.0342 S / 77.5865 W).

A different approach to the same base camp area begins at Cebollapampa (Lat/Lon: 9.0453 S / 77.6084 W) and starts off along the trail heading toward Laguna 69. The trail follows a stream up Quebrada Demanda. After crossing a stream coming down from the right the trail rises to the right in a series of switchbacks. At the upper switchback look for a trail on the opposite side of the stream, cross the stream and follow the trail up to a ridge and then up the ridge, which leads to the grassy ravine described in the directions above. Turn and head up the ravine to an area near its head where you will find a trail on the left hand side of the ravine. This trail will lead to a stream flowing from a lake above. Cross the stream and go around the lake to a somewhat level rocky and sometimes muddy area above it where you can set up camp (Lat/Lon: 9.0342 S / 77.5865 W).

Another approach that leads to a second camp area also begins at Cebollapampa (Lat/Lon: 9.0453 S / 77.6084 W) and starts off along the trail heading toward Laguna 69. The trail follows a stream up Quebrada Demanda. After crossing a stream coming down from the right the trail rises to the right in a series of switchbacks. After the switchbacks to the trail leads to a ridge where a faint trail comes in from the right. Follow this trail/ridge to the southeast and then head up the terminal moraine below Yanapaccha toward a large rock buttress. You can camp just below the rock buttress and glacier. The books listed below provide additional information for this approach and for the climbing route that begins from this base camp area. 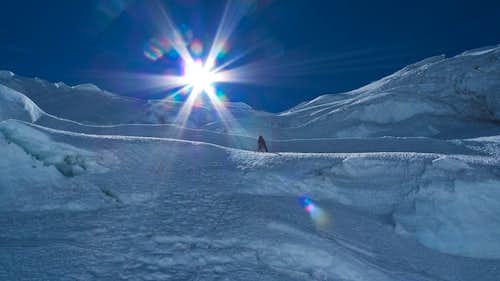 From the first base camp area described above, walk to the upper end of the somewhat level area and look for a cairned route, leading to the left over the ridge of rocks and then down to the edge of the glacier. Once on the glacier, you will need to find your way through the upper portion of the lower crevasse field and across toward the middle of the glacier. From there the route goes basically straight up toward the summit.

Note that both routes require route-finding in crevassed areas of the lower and middle part of the glacier.

Update: rgg notes that the normal route in 2011 is the NW ridge, gained about a half half hour from the summit. The walk on the ridge isn´t difficult, but the crux is to get on the ridge: the easiest way is a steep slope, 50-55 degrees and about 80-90m long. You get on the ridge just right of a very big mushroom. It´s possible to get on the ridge a little further to the right, ie closer to the summit, but not much, since big seracs are hanging high on the west wall. Getting on the ridge further left would be easier, but then the mushroom would be a big obstacle.

Update 2013: It appears that the normal route has moved off of the ridge and back to the face.

Tyler Anderson, my guide on Yanapaccha died in a climbing accident on Yanapaccha in 2010. He loved the mountains in Peru and provided excellent service to me and my fellow climbers as well as many others. He will be greatly missed.

Trip Report on Climbing Yanapaccha via the west face

Thanks. I added your info to the route section of the page and credited you with the update. Brad Johnson metions the NW ridge route, and indicates that in some years it may be the necessary route to reach the summit. When I did it we went straight up the west face, which was a good challenge for me.

Looks like the normal route has returned to the face in 2013.

Yep, based on what other people have posted, it seems that the condition of the face has improved over what it was two years ago. It just confirms that glacier route conditions can be fickle, and the best way up changes over time...

Thanks. It's always great to have updates from members that can check the conditions first hand.