Today's 12000 footer was Yard, elevation 12,706 feet, Utah's 41st highest peak. Yard is located between the Left Hand Fork and the Right Hand Fork of the East Fork of the Bear River above scenic Allsop Lake in the Uinta Mountains of Utah. Yard is a long day hike, 9.6 miles one way. It wasn't the distance that bothered me, the first 9.2 miles were easy, rising only 2200 feet. What had me worried was the final 4/10 mile which rose 1500 feet and looked like of a bunch of loose rock perched on top of a thousand foot cliff. 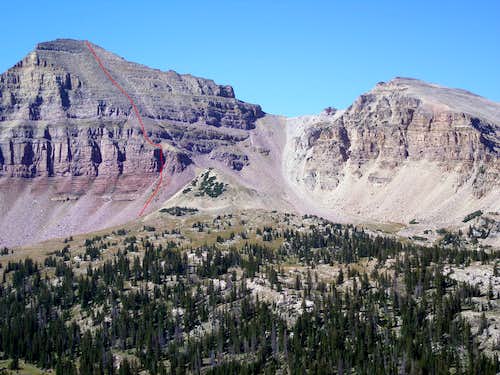 The trail starts at 9100' near a Boy Scout Camp which was partially burned down along with a good chunk of forest by a fire thought by many to have been started by scouts in 2002. The trail begins in a burned out section but you hardly notice the charred trees due to the lush undergrowth. Gradually the burned section is left behind and the cow section is reached. These are some of the largest cows on the planet, they are enormous. They do quite well roaming by themselves and are afraid of people. I set them going and they started off at a gallop down the trail. They slowed down after a while but continued to follow the path of least resistance which was right in front of me. I was hoping that once I hit the trail split at 3.7 miles they'd go the other way. Half of them did but I was still stuck behind the other half. Fortunately, cows are lazy and as the trail steepened they peeled off one by one and I didn't see any more cows until on my way back. 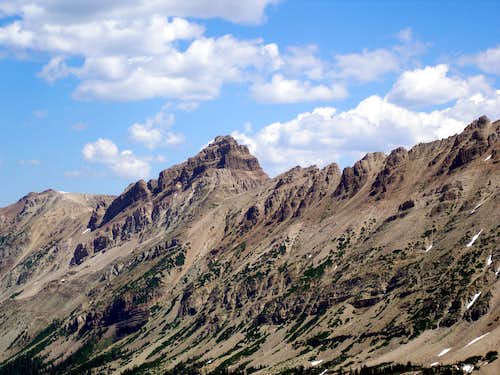 I had started at 5:25 am when it was just barely light enough to see and reached the trail split in about 1.5 hours. I took the left branch and it was another easy 4.8 miles to Allsop Lake which I reached about 9. I finally broke into the sun just before the lake. The canyon is walled by the Beulah ridge to the east and the Cathedral ridge to the west, both extremely scenic. The trail is well defined and easy to follow the whole way. However, there are lots of muddy sections in the first half and lots of grassy sections covered with water in the second. I saw a moose in one of the meadows but it didn't stick around long enough for me to get a good picture. 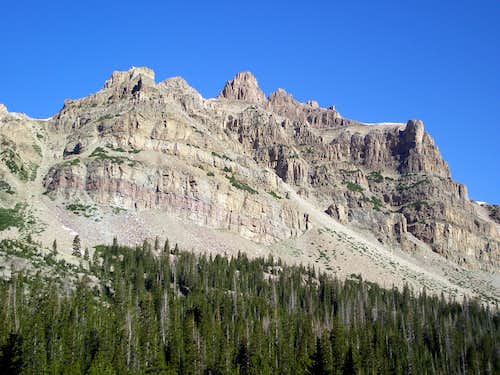 Each time I caught a glimpse of the rushing stream I wondered if I'd be able to cross it without getting wet, but, not to worry, some nice person had laid a convenient log across the stream just north of the lake outlet. Once at the lake, I headed SW towards the bottom of the couloir mentioned in the route Northeast Ridge via Allsop Lake, which is the route I took to the summit. 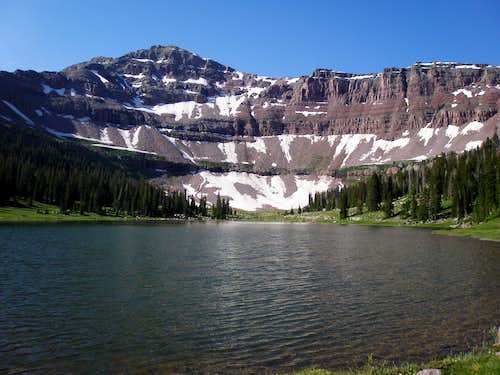 The smartest thing I did on this hike was to put on ankle gaitors once I hit the scree. Going up the couloir I hung onto the the south wall while zillions of small stones cascaded over my boots. I sent medium sized rocks flying left and right. There were two tricky spots in close succession in the middle of the couloir that involved big step ups with nothing solid to hold onto with loose rock everywhere.

At the top of the couloir I wasn't sure which way to go, straight or to the left. In the middle of the two choices was a cliff. Straight started out the easiest so that's what I picked but I quickly found myself in an even more cliffy area. I backtracked and headed left and then right and avoided the cliffs. From then on it was a straightforward shot to the summit. I was pleasantly surprised by the rock stability. I had expected it to be like in the couloir but instead was easy going (relatively speaking). Yes, occasionally a rock would shift but I didn't send even a single rock flying unlike in the couloir. All my effort was spent in going up instead of trying to keep from sliding back down. I made steady progress in this section and I reached the summit by 11. The hike turned out much easier than expected and wasn't the least bit scary. There is not even a speck of exposure on the whole thing. It's just steep. 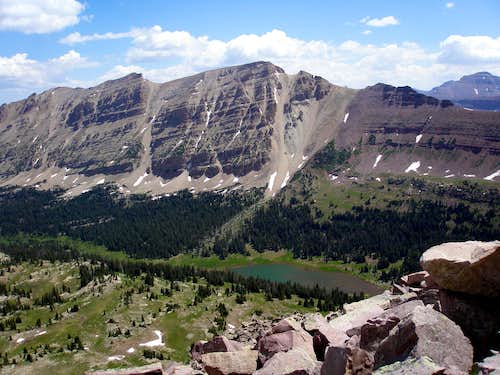 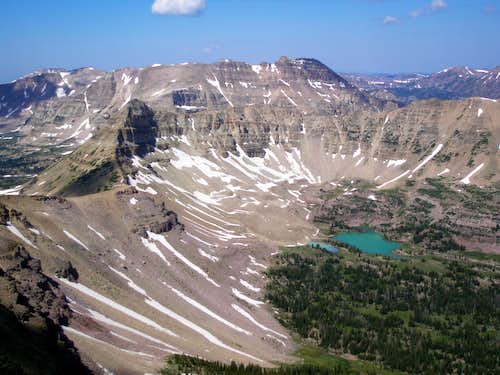 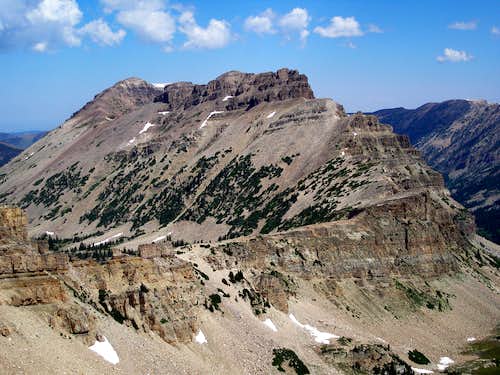 View north to the Cathedral

Going down the couloir I sent even more rocks flying than on my way up. I would not want to be in there with another person unless they were stuck to my butt like glue. There is really no room to dodge any rocks. I found the second little tricky spot to be rather awkward and thought I could balance better without my pack on. I dropped it hoping it would stay put but realized the possibility of it sliding quite a ways. Fortunately it didn't go very far. I found myself balancing on a three inch ledge with my left foot while contemplating what would happen if I placed my right foot on a particular rock. Would it slide taking a much larger rock with it? Again, good fortune was with me and I made it down safely.

As I exited the couloir and made my way down the final bit of steep section I looked toward the meadow at the bottom and watched two groups of mountain goats, merging together, running as fast as they could, away from me. There must have been at least 40 including lots of little ones. I think all the clatter coming from the couloir must have tipped them off. 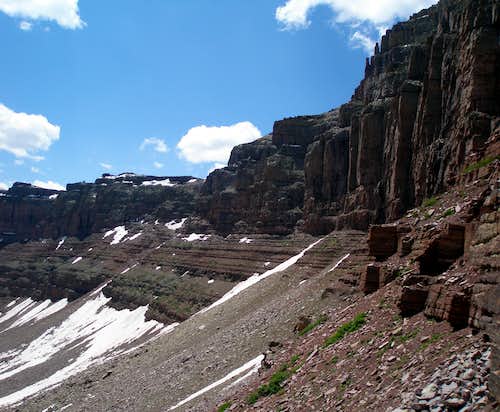 View from bottom of the couloir of Yard cliffs

I got back to the lake and retrieved the water I had cached. This was easier said than done since my GPSr managed to be 100 feet off. "Let's see, maybe it's under this tree." I took one last look at the lake and began the 8.5 mile hike back to the car. I hadn't seen anyone yet and had expected to meet hordes of people heading in for the weekend as it was Friday afternoon, but I only saw 2 people all the way out. I was back at the car by 4:30 pm. The whole trip had taken just over 11 hours.

I think the scenery in this canyon is amazing and would recommend this hike to any experienced off-trail hiker who is in good shape. I thought it was easier than either Beulah or the hike to Allsop and North Allsop Peaks which are accessed by the same trail. It is slightly less than a 2 hour drive from Salt Lake City to the trailhead.

Question #1:
How do you make your images appear so LARGE on the TR page?

Question #2:
I see you have Yard Peak 'labeled' as "hiking." Is there any
'ice climbing' in the Uintas, or is that limited to the Wasatch
(mainly Provo Canyon)?

Question #3:
Is ANYBODY in your mountaineering/hiking group familar with the
Oquirrh Mts [between Tooele & West Valley City?] (Has anybody
heard of a Levette Peak, just to the south of Barneys Peak?)

Thanks! I haven't heard from you for awhile and wondered what the heck happened to you.

1) I use center and size medium. I tried manually changing medium to large in the text to see what would happen, but that didn't seem to work.

2) I don't do ice climbing myself and have never heard of anyone doing so in the Uintas.

3) I'm only familiar with the Oquirrhs south of Butterfield Canyon and have done all those over 10000 feet. You never hear of anyone going to the Oquirrhs. It's like they don't exist, but they are really quite nice. They look very dry and barren but when you get there are actually lush. I looked on the map and found Barneys Peak but nothing labeled "Levette" Peak. I did find a "Leavetts" Canyon SW of Barney Peak. There were several unnameed peaks, the closest to Leavetts Canyon was 7989.

Thank you! That computes with my research. Yes, my parents live in
Tooele, and told me the reservoir in Settlement Canyon is full.
With the population of Tooele growing so fast, they really need
the water. (Either that, or buy bottled water.) Nice page, ZJ !!