Matt J, Matt L, and I left Utah County around 8 pm September 21, 2011, arriving in Las Vegas around 1 am (Mountain Time). Next morning we took off around 9 am (Mountain Time), and drove west through Pahrump, NV and into Death Valley (where the road reaches a low of 190 feet below sea level, and the temperature was over 100 F), arriving in Lone Pine, CA around noon (Pacific Time). Our first stop was the Ranger Station where we picked up our backcountry permits, and rented a couple of bear proof canisters. Next we stopped at a pizza joint and had lunch. After lunch we drove the 13 miles from 3,727 ft high Lone Pine to 8,365 ft high Whitney Portal, where the walking would begin.

By 2:30 pm (Pacific Time), we had our gear and backpacks organized and were on the main Mount Whitney trail. Within a mile or so we left the main trail where it crosses the North Fork of Lone Pine Creek. On the new trail we headed up a wooded slope into a willow-choked valley, roughly following the North Fork of Lone Pine Creek. After the second creek crossing we arrived at the base of the Ebersbacher Ledges. Traversing the ledges involved some class 3 scrambling where a slip could be fatal. Once over the ledges we reached 10,300 ft high Lower Boy Scout Lake, around 5:15 pm having walked approximately 2.5 miles. We crossed the creek and traversed around the lake on its left (south) side, and were soon climbing over talus, eventually crossing the creek again where it runs over granite slabs. Within a mile or so from the lower lake, and by 6:00 pm, we had found a camp spot at 11,300 ft high Upper Boy Scout Lake, and we managed to get our tents set up before the sun set. That night I ate a Mountain House Pasta Primavera which was surprisingly tasty!

Ascent Via The East Buttress:  HP #12 of the 50 US State Highpoints

Next morning, September 23, 2011, we set off around 5:15 am en route to 12,560 ft high Iceberg Lake at the base of Mount Whitney’s Eastern Buttress. Iceberg Lake is approximately 1 to 1.5 miles east of Upper Boy Scout Lake and 1,200 plus vertical feet higher and we reached it by 6:30 am, with the sun totally up. At Iceberg Lake we pumped some water, and scrambled up a 1,000 vertical feet of talus and 3rd class terrain to a notch below a tower where the roped climbing would begin. 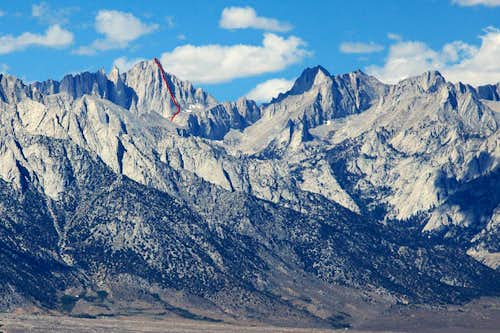 The first two pitches were more or less straight up to the top of the second tower, and took about an hour and a quarter to climb, putting us at the top of pitch two around 9 am. Matt L led the first pitch, and Matt J led the second pitch. These first two pitches have ratings ranging from 5.6 to 5.8. Although we started out before another group consisting of two climbers, they caught up to us at the top of the first pitch. Sharing the route with them ended up being the story of the day.

The third pitch is where things got difficult. We had the option at this point to go over a short arête/rock(5.7) or to drop down a big step to a 5.6 ramp. With speed in mind, and hoping to pull ahead of the other party, we decided on the 5.6 ramp, but what we didn’t realize was it was spot covered in snow and ice due to its northern aspect. Matt L led this pitch, and with his skill level was able to avoid a lot of the snow/ice, but as I followed I soon had my climbing shoes covered in snow, and my hands frozen. This was a bit nerve rattling to say the least, especially when my now wet shoes failed to grip (even as I tried, unsuccessfully, to smear them on the rocks to dry them). Arriving at the belay ledge at the base of a prominent right-facing corner was a great relief. The other party used the 5.7 option for the third pitch converging at the same belay area and informed us that their route was easier climbing but with limited protection thanks, in part, to useless ancient pitons that were not clipable.

It was after 10:00 am when Matt J led the 4th pitch, and he ran the rope almost completely out on this 5.6 step like section known as the "red corner". Matt L led the next pitch which took us up to a large ledge just under the "peewee" block.

The 6th pitch which runs along the right hand side of the peewee block was led by Matt J, and the three of us topped out on that by noon. All this time there was one other party of two ahead of our two parties. This front-running party, were often referred to as the "white guy" (because one of the fellows was dressed in white, and the other in black if you can believe it). At this point, the top of the peewee, all three groups overlapped momentarily, with the lead group soon pulling ahead again.

Keeping with leads swinging between Matt L and Matt J, Matt L lead the 7th pitch, choosing a flake which was too good to pass up even though he worried it might be challenging for me to follow. Fortunately it ended up being fine for me to follow. We ran into a little bit of trouble on the 8th pitch when we decided not to wait for the group we were sharing the route with to finish the pitch. Matt J tried a variation on the pitch only to run into a difficult ceiling causing him to be lowered back to the belay station. By that time, around 1pm, the other climbers were gone, and we were able to follow the same pitch they had used, Matt L also led this one, which looked relatively easy but turned out to be challenging (as tired and as cold as we were).

At the top of the 8th pitch, I put in one more piece of protection, climbed up a large boulder and unroped, and the Matts followed. At this point I decided to remove my "cruel shoes" and put on my boots understanding the remaining 300 ft to be mostly class 3 or moderate 4. As I did so, the Matts kept moving and I soon lost sight of them.

Eventual, as I scrambled up what turned out to be 4th class and moderate 5th class, unroped at over 14,000 feet I noticed Matt L, and decided to follow him. About 30 feet from the top, I ran into a sheer 10 foot wall which I dared not climb unroped. I scrambled around a bit looking for an easier alternative only to come up short. I had just decided to sit down and eat my lunch before trying to work my way down and south to the class 3 stuff (left if climbing up), when I heard Matt L calling out to me. I asked him to get a rope and drop it down to me, which he did. On rope I was able to climb past my road block, in my boots, and then finish the scramble to the 14,497 foot peak arriving on top at 3:00 pm (about 6 and 3/4 hours from the time we roped up).

Descent Via The Mountaineers Route

By 3:45 pm we located the Mountaineers route, and started down it. It was coated in ice, and we didn’t have crampons nor axes, so we stuck to the 4th class boulders on the left side still having to work our way around some snow and ice. Eventually we crossed it on a sugary snow section and continued down the right side. Just above the saddle where the route turns right and heads down to the west we were forced to down climb a 5th class section about 20 feet high, that had limited hand holds and spots of ice and snow, it was quite unsettling, especially after all we had been through up to that point. Fortunately, we all made it down without incident and continued down the "never ending" west aspect couloir of the Mountaineers Route arriving by 6:00 pm at Iceberg Lake. Within an hour we were back at camp at Upper Boy Scout Lake. Fourteen hours of hiking, scrambling, and climbing was now behind us, and Mountain House Beef Stew never tasted so good! 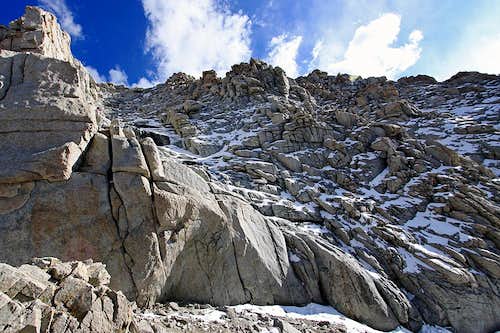 The top section of the Mountaineers Route was dangerously covered in snow and ice. 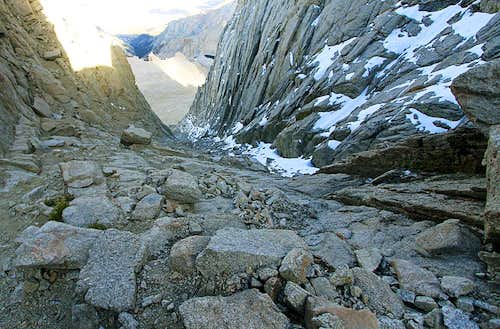 Looking down the second section of the Mountaineers Route

September 24, we woke up to hail, that would come and go intermingled with sunshine and/or rain. Enjoying and needing the rest, we forfeited our plan to scramble up Mt. Russell. By 11:30 am in steady hail we headed down. Soon the hail stopped, and the sun came out. At the lower lake I removed my jacket and paused to look back noticing the Peak of Mt. Whitney above the lakes eastern wall, it looked a long ways away!

At the Ebersbacher Ledges we got off track by following a lone hiker in an orange hat. We soon discovered our error and notified the hiker as well. Once we got down the ledges and across the creek, we stopped for a drink and I noticed the hiker had ignored us and was way off course, in potential danger, and without his back pack. I whistled at him, caught his attention, and we were able to yell directions to him, allowing him to get off the ledges. I left my pack and hiked up to him meeting him just a few yards past the creek crossing. He seems uneasy but he said he was fine. I asked about his pack and he said it fell off the cliff when he tried to lower it down a section. Hearing he was alright and confirming a second time that he didn’t need help, we continued down arriving at Matt J’s car by 2:15 pm. I weighed my pack at the trailhead, and it was only 2 pounds lighter than when we started out, and I had no water left (a liter weighs 2.2 pounds, so essentially my pack was unchanged in weight from the hike in).

From Whitney Portal it was back to Lone Pine and the pizzeria, and then to the Ranger Station to return the bear canisters. Back through Death Valley, to Las Vegas, and my first deep sleep in days! Sunday morning we were up at 5:15 am (Pacific time), and back to home by 1:00pm (Mountain time). What an awesome, classic adventure!

Great story, hoping to do this route next summer.

The toughest part is getting the permit! Have fun.