After having been in the Zinal area in 2011, where I had those two breathtaking days on Grand Mountet, one thing was absolutely certain for me: I had to go back! I had to wait two years, but then this year (2013) it turned out that I had six free days in August - enough time to travel from Salzburg to the Valais, do a three-day hike and then back without being in a rush - and the weather forecast for the area was fantastic. So I took the night train from Salzburg to Zurich, did all of the train and bus changes between Zurich and Zinal, and arrived there at midday. A quick lunch in one of the restaurants, and I set off straight away for the Tracuit hut. It took me longer then the indicated four and a half hours, as I went at a fairly easy pace - didn't want to overdo anything, as this was the first time in already quite a while that I had done a trail leading from 1675 m right to 3256 m. I reached the Tracuit hut that evening - August 20th - at a quarter to eight, just in time to still be served a meal - unfortunately, due to the fixed meal schedules the wardens insisted on, it didn't leave me much time to enjoy the magnificent sunset up there. Some of the photos I had to take sort of "on the sneak"! :D 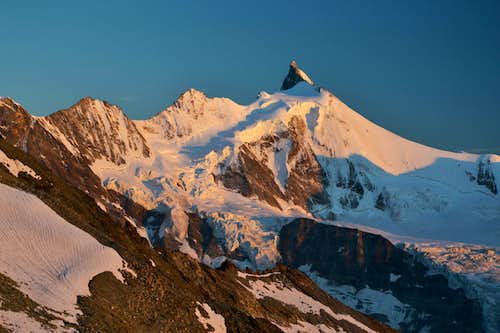 Seen from the Tracuit hut. The two summits to the left of Zinalrothorn are Pointe Nord de Moming (3863 m) and Pointe Sud de Moming (3963 m).
As to the condition the old Tracuit hut was in, I can't give any personal judgement, I never had been there before. All I can say is this: Already last year (2012) I had intended to go up there, and researched on the Internet. That's where I found the informations upon the hut "being in an appalling and shocking condition"..."worst hut in the Swiss Alps", and that the construction of a completely new hut was planned, which was to be finished in 2013. In any case, the new hut is impeccable - entirely modernized - maybe a bit too much for my taste - you even get W-LAN up there! - spic and span, the dormitories are absolutely tidy and clean, and you get excellent meals served up there. 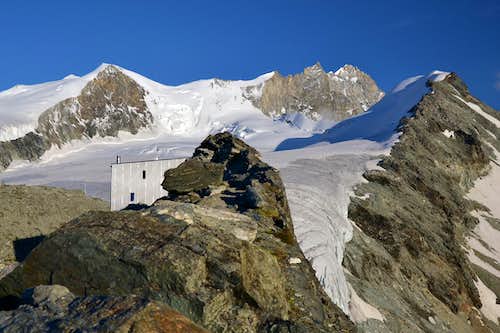 The Tracuit hut (3256 m) is situated on the Col de Tracuit between Zinal and the Turtmann valley. Above the hut, Bishorn, Weisshorn and the Turtmann glacier.
Next morning I woke up to as gorgeous a morning as any you would expect on 3256 meters height. I set off at about 9:00 a. m. and took the newly built direct trail over the Col de Milon (2992 m) to the Cabane de l'Ar Pitetta or Arpitettaz. This meant going back the way I came for about half a mile, then at crossroads, following the sign "Arpitettaz", I turned left and descended to about 2700 meters. From here the trail rises very steeply up a rubble slope, and the last bit up to the Col de Milon is a scramble, secured by a chain. 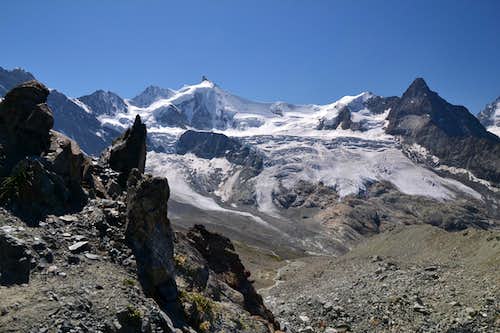 View from the Col de Milon, on the trail between the huts of Tracuit and Ar Pitetta, to Zinalrothorn, the rock pyramid of Besso and the large Glacier de Moming.
Once up at Col de Milon, the trail follows the top of a moraine - the scenery is absolutely breathtaking, the path completely stable and thus not difficult at all. This section was pure enjoyment!!! - , then down to a glacial river which you cross over a wooden bridge, then over alpine grass, contrasting wonderfully to all the monumental ice and rock landscape around, to the gorgeously situated Ar Pitetta hut. I arrived there in the afternoon, simply relaxed for the rest of the day, enjoyed another wonderful sunset over the glaciers of Zinalrothorn, Blanc de Moming, Besso, Schalihorn and Weisshorn, and stayed overnight.
The Ar Pitetta hut is more simple, more "primitive", without in any way being in a bad condition, and thus more intimate than the brand new and modernized Tracuit hut. And what surroundings...!!! The only warden that day was a young girl from near Geneva who had come there to work during the summer. Upon my asking her if she had to do all the work all alone during the entire season, she said, no, no, normally we are three or four people, but the others had to go back down for some urgent matters. In two days there would be someone coming up to assist her. 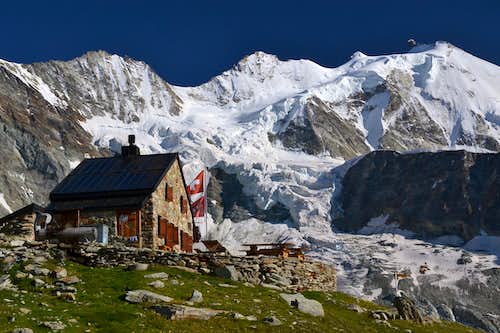 The gorgeously located Cabane de l'Ar Pitetta on 2786 meters. The summit of Zinalrothorn is on the right. To it's left, the Pointes Nord et Sud de Moming.

The cuisine that day, naturally, wasn't necessarily opulent...more than vegetable soup and an "assiette valaisanne" consisting of a small salami, a piece of - excellent! - cheese and dark bread there wasn't to eat, and the warden wasn't even sure if she could give us all a meal (five other hikers had arrived at the hut meanwhile - a very friendly group from Belgium). Oh well - I still had tidbits of my own in my rucksack anyway, and in the mountains, it's part of the deal to make concessions on this point. ;-)
The following day I descended via the beautifully situated Lac d'Arpitettaz to Le Vichiesso and Zinal. As I was at the lake, I saw an enormous avalanche coming down from Schalihorn. Impressive sight - but thank God I was nowhere near!!!
That night I stayed in Zinal, in a modest but very well-kept hotel which was also nice and cheap by Swiss standards, and next day I headed back down to Sierre. Instead of going straight back to Salzburg, it turned out that I spontaneously went to Vevey first, where I had another wonderful day and evening. But that's another story... 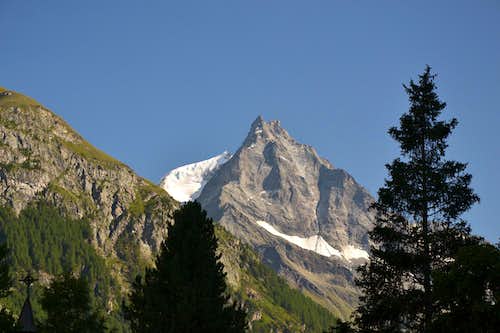 Blanc de Moming and Besso seen in the evening from the village of Zinal.
I hope you all enjoy my pics - I can only say: this was another absolutely great time in the Pennine Alps. And maybe one other thing that I should mention: During these four days, right from the very beginning in the night-train to my ride back to Salzburg I did not meet upon any unfriendliness, unwillingness or anything of the kind from anybody. Not once! Everywhere I was, the people were kind, cheerful, hospitable and friendly. This also matters, I find.
Merci Valais - je reviendrai!!

...and your usual lovely Alpen-glow photos!
I remember your 2011 photos - looking at the back of Dent Blanche if my memory serves me correctly. And now you have some lovely views of the Zinal Rothorn, another old friend of mine, from a very long time ago.
And this year, we looked at visiting the Bishorn to acclimatise on for the bigger peaks, but went for Cima di Jazzi when we realised we didn't have enough time to get in and out of this more remote area... also we had heard the rumours you have now dispelled on the Tracuit Hut!
I'll bear it in mind for another year - so thanks Eric!
best wishes, Mark

Thanks a lot, Mark - nice to hear from you! Yes, in 2011 it was mainly Obergabelhorn, Dent Blanche and Pointe de Zinal I aimed my camera at. The Zinalrothorn's south side was maybe a bit less exciting from the Grand Mountet. This time, viewing it from the north, the Zinalrothorn was something like a main character in a movie for me!
You should go to the Tracuit hut, if you can - the new hut is excellent. No complaints from my side whatsoever! But make sure you arrive by six o'clock in the evening latest, if you want to have dinner (the fixed time is 18:30) AND take sunset pictures in front of the hut...I got there at more or less eight o'clock in the evening, and they were pretty fussy... :D
Cima di Jazzi is surely a great peak as well! Any photos? Should have a look on your page...
Cheers and all the best to you, Mark,
Eric

and absolutely phantastic photos - thanks for sharing them.

I was once staying in the old Cabane du Tracuit and I have to say that it wasn´t that bad; it was an old hut with the toilets hanging above perpendicular rock faces and some tubes bringing ice cold water from the glaciers to some bathtubes in front of the hut where you could do your "personal cleaning" - old swiss standard on high huts :-) The staff was friendly as long as you spoke French with them but that is the style on the Swiss- french huts. Nothing too unusual.
Cheers, Michael

Hi Michael - thanks for writing and also for your comments on the old Tracuit hut! Interesting...as I said above, I never was at the old hut myself...I had to chuckle when I read what you wrote about the toilets and the ice cold glacier water for washing one's self - haha! The new hut has a SHOWER in it - with warm water!!! And the toilets are in the hut itself, on the lowest floor! Hardly any difference from going to the toilet in a restaurant down-town!
As to the friendliness, that I can confirm. The people were very friendly both in the Tracuit and the Ar Pitetta hut. The wife of the warden of Cabane de Tracuit even spoke some German - I heard her talking to some climbers from Germany. Of course, speaking French - and thankfully I do - is always of big advantage in that part of the Valais...
Cheers,
Eric