In times gone by, Obergurgl was a tiny mountain dwelling deep in the Gurgler valley, which in turn is an extension of the larger Ötztal valley. The big glaciers dominating the southern parts of the Ötztal Alps were not far away, and life must have been hard for the locals. In the 20th century, the birth of the tourist industry changed all that. Nowadays it is still fairly small, but in winter it's a busy ski resort, and its high elevation of just over 1900 m ensures that it will still have a future for a while, despite the warmer temperatures of late. 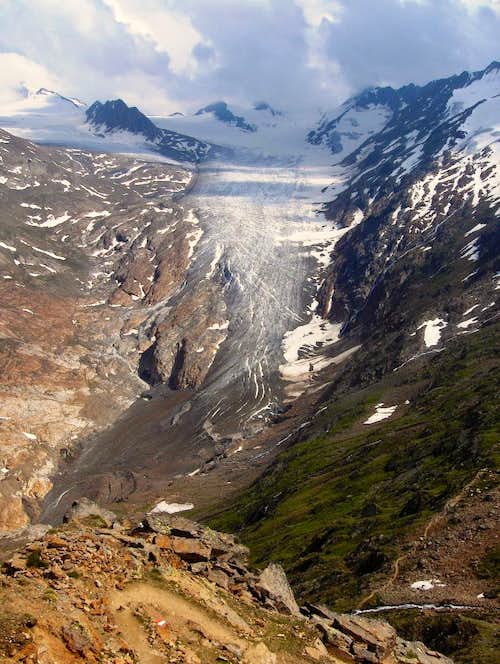 Summertime view from the Ramolhaus down on the Gurgler Glacier
By the time the winter guests have gone the village gets quiet again, but for those enjoying a variety of mountain experiences there is still plenty to do in the area. There are lots of hiking trails, from easy to difficult, glaciers to watch, and plenty of mountains to explore and climb. There are also a couple of Vie Ferrate, and the closest one, "Klettersteig Zirbenwald" as it is called in german, lies just outside the village. It clings to a cliff face right to the Gurgler Ache, the mountain stream coming straight of the rapidly receding but, higher up, still sizable Gurgler Glacier. 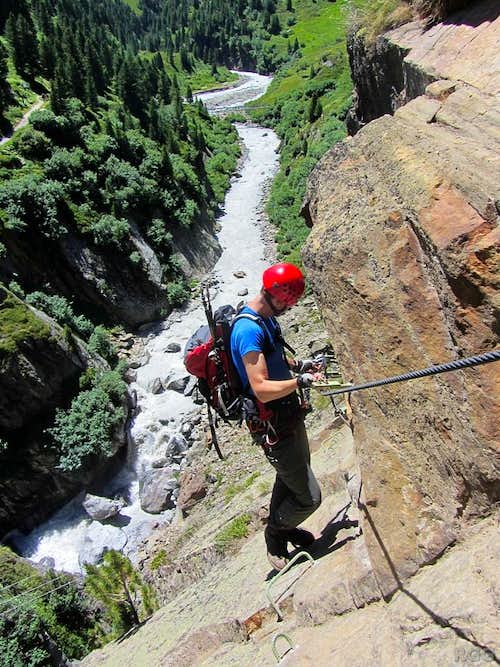 Wilco on the route, high above the raging Gurgler Ache
The route is very exposed in many places, but steel cables provide safety. While it's a relatively easy route, there is one short harder section to contend with. With a bit of via ferrata or climbing experience it won't pose a problem at all, but it would make me hesitate to take someone completely new to climbing on this route.

The route has borrowed its name from the "Zirbenwald", a small, old dwarf pine forest that is now a special protected area.

The Ötztal valley can be reached all year round from the north, entering at the village of Ötztal Bahnhof. The nearest big city, just to the east of Ötztal Bahnhof, is Innsbruck, well connected by trains and buses, and with a small international airport. Alternatively, Munich is only a couple of hours to the north.

From Ötztal Bahnhof, buses travel south the length of the Ötztal, and the last stop on the line is in the center of Obergurgl.


Satelite view of our parking spot.
We came by car instead, and parked by the side of the road right outside Obergurgl.

The first orientation point along the route is David's Hütte, almost 1 km to the southwest from the bus stop in Obergurgl, and, like the village itself, on the east side of the Gurgler Ache. From our parking spot, it's straight down the Gaisbergweg, following trail nr 5/6 to the Zirbenwald.

Right past David's Hütte, the road turns into a trail and enters the forest. A few minutes later you'll come to a sign that marks the start of the Via Ferrata.

From Italy in the south, the Ötztal can only be reached when the high Timmelsjoch pass is open. If there is too much snow, the pass is closed, which is normally from late fall to somewhere in spring. In that case, the normal way to get there from the south is to take the long way around over the Brenner pass, via Innsbruck. 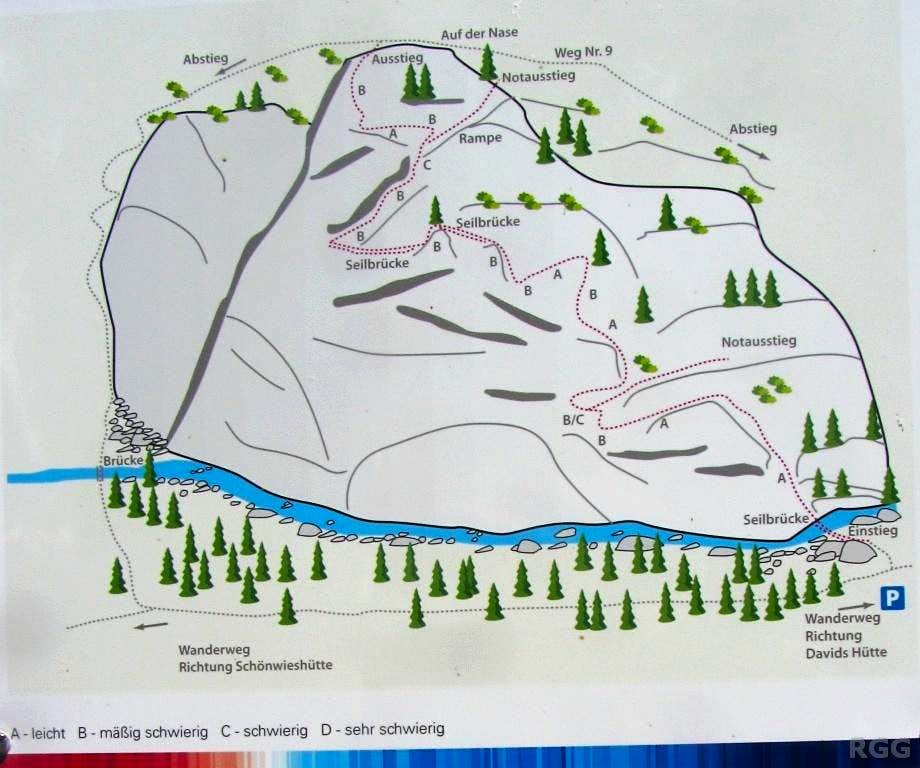 A big information panel at the start of the route clearly explains what to expect. 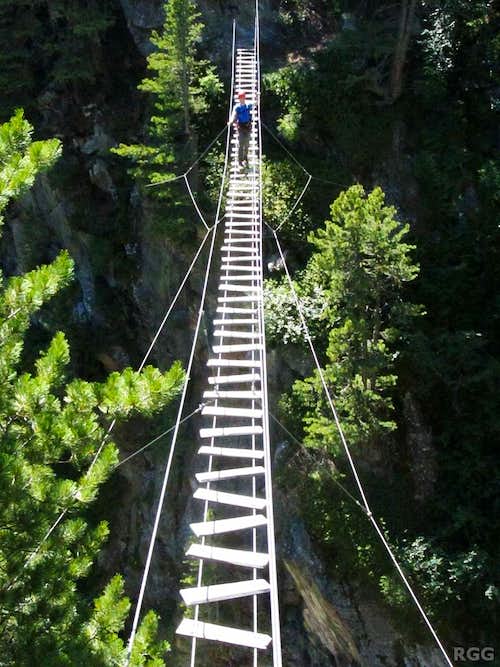 Crossing the wobbly bridge at the start of the Obergurgler Klettersteig
The route is a Via Ferrata, or, in German, a Klettersteig, grade C.

It starts with a wobbly bridge ("Seilbrücke" in german) over the river. At first glance it doesn't look trustworthy, but a closer look reveals that the unorganized appearence of the boards is intentional. The bridge builders must have had a sense of humor. Just looking at it again makes me smile...

Once across, a short walking section leads to the real fun.

The route clings to the face, and goes around a couple of blind corners. Plenty of footholds make it easy climbing, and all the exposed parts are well secured by steel cables. 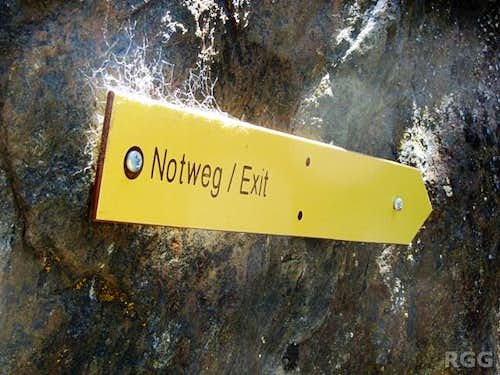 Apparently it's going to get harder from here on 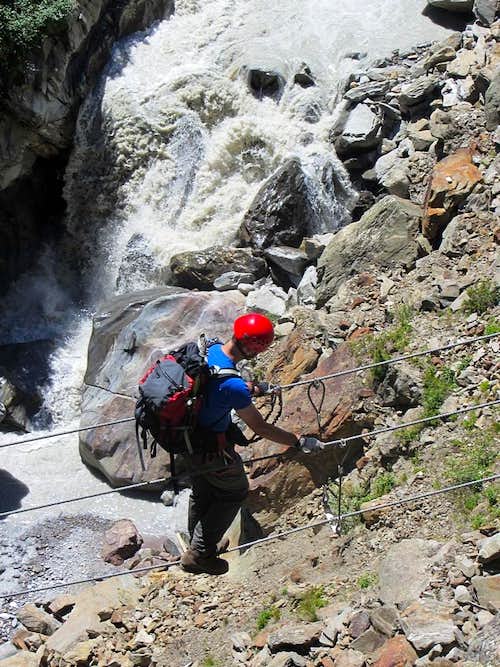 Crossing a wire bridge on the Obergurgler Klettersteig
Soon you'll reach a sign that says "Notweg / Exit". It will get harder later on, so if you didn't find the route up to this point real easy, this is where you can escape.

For now, more easy climbing follows, until the route reaches the first of a couple of wire bridges. You have to walk the steel wire, which, in contrast to the rocks, will move a bit in response to your movements. Still easy, and good fun.

After the bridges it's one more easy section before reaching the crux of the route. The route goes straight up, and a bit of upper body strength is useful. However, because it's short, it is only rated C. 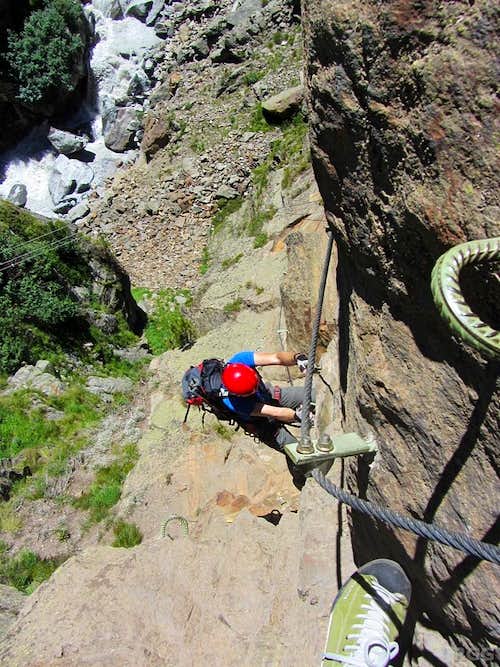 Climbing the steepest part of the Obergurgler Klettersteig

Strangely enough, there is another "Notweg / Exit" sign right after the crux. Makes no sense to me: if you manage to get this far, you'll be able to finish the route. The few remaining sections are easy again. 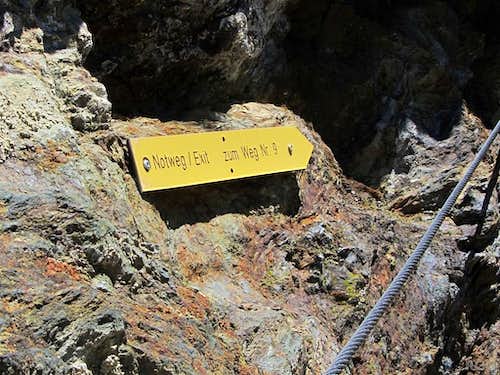 Escape route high on the Obergurgler Klettersteig - strangely enough right after the crux!

The route ends on a nice viewpoint, at trail nr 9. Go to the right to get back to Obergurgl in 15 minutes, or left if you have other plans. How about hiking to the Gurgler Glacier, or ascending Hangerer? 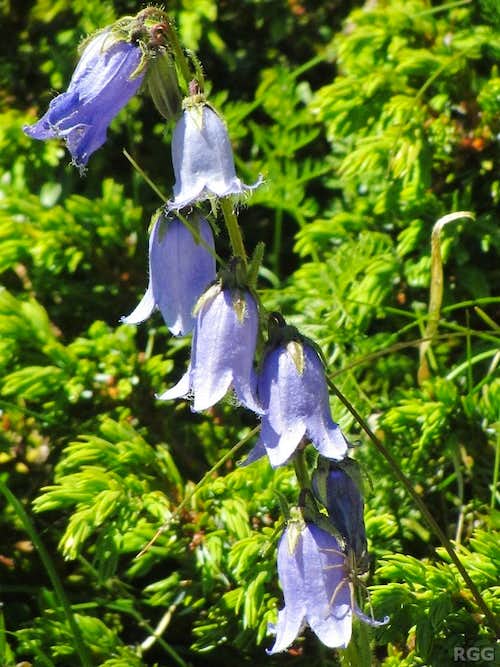 Bearded Bellflower (Campanula barbata)
Best from late spring to fall, when there is little or no snow.

Although not absolutely necessary, climbing gloves to protect your hands are useful, or you could easily tear them open on the steel cables. 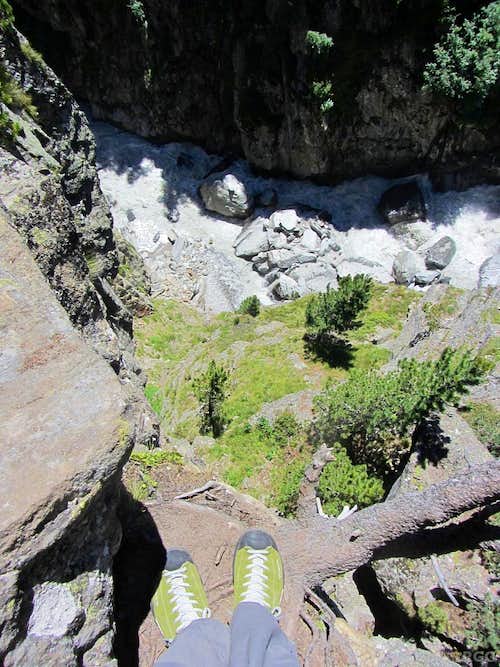 My (camouflaged) feet at the edge of a big drop. These light shoes were fine.