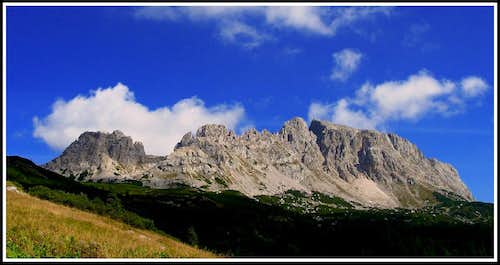 ganesh70 - Until we get a more detailed picture of Zottachkopf, here is the view on the whole Trogkofel massif from the SW. Zottachkopf is on the far left.

Besides Zottachkopf, mountain's name is written also Zottach Kopf and in Italian Cima Zottag. More rarely it is named also Zottach Kogel. Otherwise the name origin can be either in the fact that "Zottach" can mean in the local dialect a cluster of plants and shrubs, or in the fact that "Zottach" can mean also "rugged". So, the "Rugged Head", or "Rugged Summit", which certainly the mountain very much looks like.

Being attached to the western part of Trogkofel's massif, the summit has a prominence of only good 50 meters. It would be completely unimportant, if north-west of it there was not the big and by a publicly opened mountain road reachable Rattendorfer Alm, 1535 m. That nice and popular meadow needed a summit with some easy rocks for tourists. And, in addition, Zottachkopf offers tourists also some nice scenery around its summit.

So, where Trogkofel's high northern walls end on the west, the main ridge lowers considerably, and after a notch, some 1980 m high (Zottach / Zottag notch), a group of rocky towers rises. The highest summit has 2046 m, and the neighbouring southern summit is not much lower (2033 m). More towards the west, in the main crest there is the broad Rattendorfer Sattel / Sella Val Dolce, 1781 m, the pass, connecting Rattendorfer Alm on the north and Passo del Cason di Lanza on the south.

In contrast to the neighbouring Trogkofel, Zottachkopf does not have a compact northern wall any more. It is still rocky, but lowers in many steps and its inclination is not big. Only some parts of the slope form short, compact walls. Towards the south, the summit towers soon lower on an overgrown slope, which lowers on the plateau above Passo del Cason di Lanza. The summit is quite easily reached. Three marked routes join just below the highest rocks. One (normal) is coming from the south, the other two (an easy ferrata and an ex military path) are coming from the north-west. For longer climbs the rocks of Zottachkopf are not suitable. In times of tour skiing, from the notch between Zottachkopf and Trogkofel massif one can ski towards the south. Other passages are more demanding, including the very steep north-east couloir. The nearby Rattendorfer Sattel / Sella Val Dolce can be also crossed by a mountain bike.

The whole massif of Trogkofel is made of paleozoic (Early Permian) limestone. In the massif, Zottachkopf formation is lying below the thick Trogkofel rocks, because it is older. The rocks are called Upper Pseudoschwagerina Limestone and in those rocks many fossilized plants and small animals (foraminifere) can be found.

As Zottachkopf is not a high mountain, it offers broad views only towards the south and north. On the west we can see the higher, grassy slopes of Hochwipfel massif and only some distant mountains are peeking from behind them. The eastern view is special. It is fully obscured by the higher Trogkofel, but we have a great view into its vertical northern faces. Towards the north, from Trogkofel a very picturesque ridge stretches towards Zweikofel.

This is the easiest, normal approach from the south. But from Rattendorfer Sattel / Sella Val Dolce, or Rattendorfer Schneid (the ridge towards the east) further on, this is also the normal ascent from the north. From both sides you would need some good 2 h on top, difficulty (on the Swiss Scale for Hikes) is mostly T1 and T2. But the very last rock requires some easy climbing (a T4 detail).

From the saddle, 1552 m, you go by the marked path towards the north. Your goal is the broad Rattendorfer Sattel / Sella Val Dolce, 1781 m, which you reach in some 45 min (here you can come also from the north). There you hit the broad and well marked Traversata Carnica / Karnische Hoehenweg. You turn right and ascend gently by a flat ridge, named Rattendorfer Schneid. Before reaching below the rocks of Zottachkopf, from the left another, more direct marked path comes up from Rattendorfer Alm.

Rock towers near the summit

There you turn left up the slopes (Traversata Carnica goes horizontally) and start crossing below Zottachkopf towards the east. You gain some altitude and reach the Zottach saddle with another crossroads, where towards the east the blue marked path towards Trogkofel continues. We go left (up) again, ascending some more steep gravel slopes towards the north. The path is still easy, it starts turning left towards our summit. Just before reaching it, the two NW approaches join us through a rock window. Now we have only a few more meters till below the summit rock. That one requires a few meters of easy climbing (UIAA I).

This is an easy ferrata, designed as an amusing climb for families ("children friendly"). It is nice and popular, for children consider taking a short rope. Actually, it is more an easy climb of UIAA I, with a detail or two of UIAA II. 2 h. 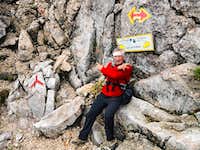 From Rattendorfer Alm you follow the marked path No. 416 towards the south (not towards the SW, on the saddle). The path goes directly up the pastures. When reaching the upper meadows, you leave the path which continues on Rattendorfer Schneid (see above #1), and follow the marks towards the south-east. The path soon enters the so-called Steinernes Meer (Sea of Stones). It's unusual why they made the path over that chaos of boulders, as it could easily go left along it. It's a bit unpleasant, but still amusing ascent though. Reaching on top of chaos, the path exits towards the left and ascends in the vicinity of a ravine till just below the steep rocks of Zottachkopf. There is another crossroads. For ferrata we turn right. One more difficult passage is coming soon, then the route continues over easy rocks. This is the shortest and most direct approach on top from the north-west. After overcoming the steepest part, the route crosses below the summit rocks and soon meets the Sagmeister route. The joint path now enters an interesting rock window, goes through it and on the other side meets the normal route. Only a few more minutes on top.

This is an ex military path (from the World War I), named by Brunhilde and Peter Sagmeister, who were long time running the Rattendorfer Alm hut. It's a steep, but still quite easy path, reaching Zottachkopf from the north. Very nice hike, it's difficulty would be rated on the Swiss Hiking Scale with T3. Only the last summit rock is a few meters of T4. 2 h of walk up and easy climb. 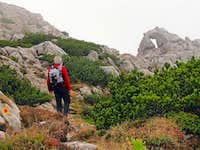 As described in #2 above, we go from Rattendorfer Alm towards the south, deter on upper meadows left, fight the way over the blocks of Steinernes Meer and ascend through a steep ravine till under the rocky wall. On the crrossroads we go left (ferrata goes right). A comfortable path now crosses eastwards. Time to time it overcomes more steep rocky steps. The path is nowhere more exposed, it uses natural passages. When reaching the broad north ridge, it goes in turns up. After overcoming the next step we reach a more flat part, where on the right a nice rock arch (window) is seen. Before it the path again turns left and up by a more steep ridge. The summit cross is just above us. From the right the ferrata route joins us, then we go through the main ridge rock window and by the other side on top.

The normal ski tour goes towards the south, towards Passo del Cason di Lanza. Skiing is nice from the notch on the main ridge (1980 m), for very good skiers also from just below the summit rocks. Through the North-east Ravine a very steep and hard ski tour goes down into the valley between Trogkofel and Zottachkopf. From there we continue towards the north-west on Rattendorfer Alm.

Zottachkopf can be reached any time of season. In hard winter conditions there is a big danger of avalanches on the southern slopes and summit gullies. Even more dangerous is the narrow nort-east couloir.