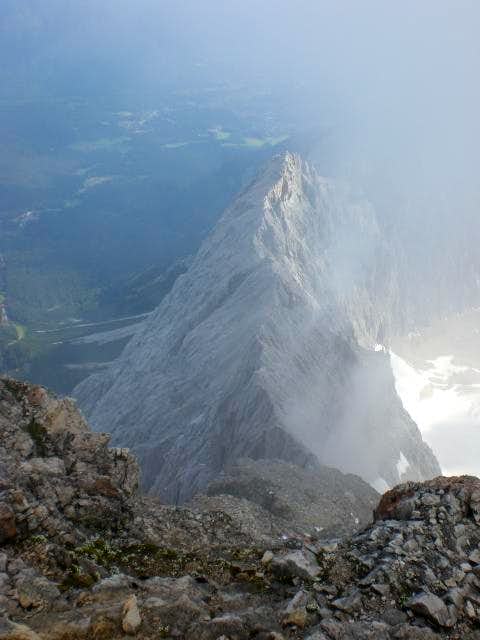 We drove and left the car at the Tyrolean Zugspitze Railway parking lot that takes you directly to the summit and followed the back road trail into a basin which reminding me of the Desert Southwest with the combination of the afternoon heat and the sandy sage brush landscape. We read the hut was classified as a third class emergency shelter and we expected instead of the service offer to the hut in Austria, it would be a place to stay like what we were accustom to in the North Cascades therefore we did not take cash. As we turned a corner around a steep rock face there was a small shelter in the distance and we thought to ourselves there it is, but as we continued up there was a modern hut from the outside appearance. We walked inside into a smaller but cozy hut with the smell of a warm fire and a handful of summit teams drinking and eating as before. The host greeted us and I could see from the kitchen that even this third class hut was the same as our previous night’s accommodations and not learning our lesson we were again without enough money and a deep need for a cold beer high on the mountain.

I woke up to a great night's sleep as we made our way into the dining hall where our new friend offered us a rich cup of coffee. Once complete, we stepped out from hut into the crisp morning air third in line from the parties whom spent the night in the hut, and as we crested the ridge there was vintage sign of the country that we were about to cross and I knew that shortly I could say we have been on the highest peak in Germany. The interesting point about Zugspitze is that unlike most peaks, the summit was a fortress with modern conveniences including an upscale restaurant, museum, gift shop, and many others services to support the hundreds per day whom make it to the summit by way of the tram. We snapped a few pictures as we were excited to be again on the highest peak on a country in Europe.