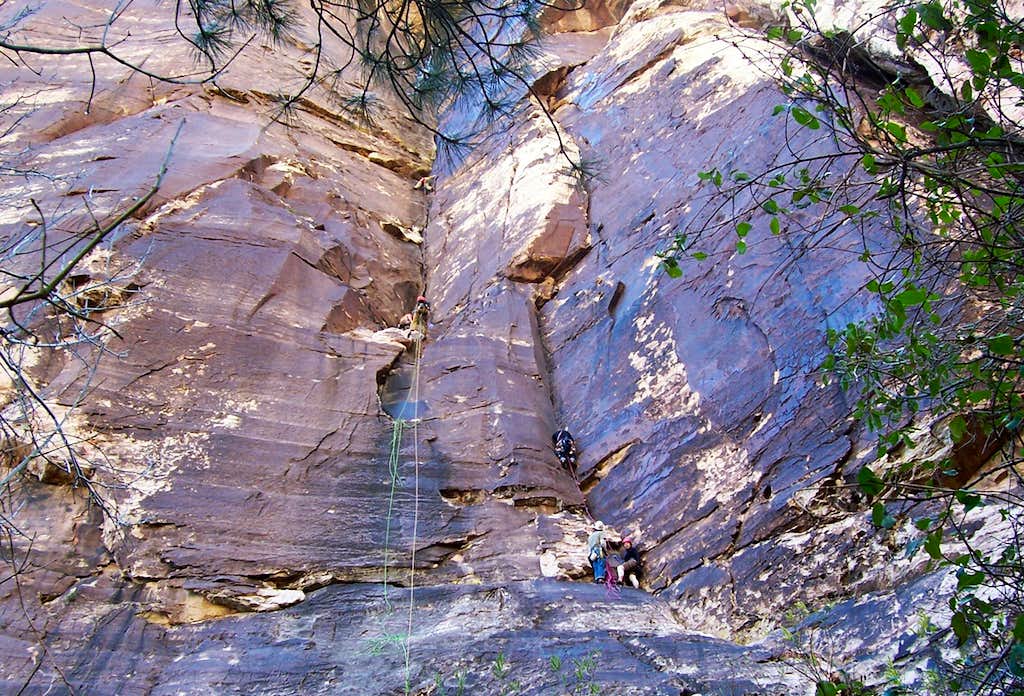 This is a tight shot of the Dark Shadows route on Red Rock's Mescalito, in full sunlight around NOON. I am not a rock climber, but I respect these people enough to give them a wide berth on the trail. They were totally involved in what they were doing, and they seemed to have the right equipment. I happened to pick up a bit of BETA on this incredible Red Rock route. "Roll out the barrel, we'll have a barrel of fun!" (Sorry, wrong information!!!) Joanne Urioste's 1984 guidebook credits NICK NORDBLOM and JOHN MARTINET with the first ascent of the complete Dark Shadows route in 1979. In the middle 1970s, Dark Shadows was a four-pitch route leading up to the big roof. At that time the initial slab pitch had no protection bolts, but Nick and his partners climbed it anyway, wearing their heavy Vasque mountaineering boots. "Really GOOD edging," said Nick. Rappel to descend. One 60mm rope will suffice, but you must be very careful on the first rappel - a backup method such as an AUTOBLOCK is recommended. It is difficult to avoid getting the rope WET! Rappeling twice with a single rope from the second pitch will make it EASIER to keep the ropes dry. Lots of varnish ... (On the day of what would be a summit climb for Nick Nordblom and John Martinet, THEY completed NINE pitches above the rock slab or large roof. They followed the upper cracks to the summit of Mescalito.) Source from Red Rocks Climbing (SuperTopos - 2004) Photo taken from the bottom of Fern Canyon, with all the other ferns. March 10, 2008 in Red Rocks, Nevada
« PREV NEXT »