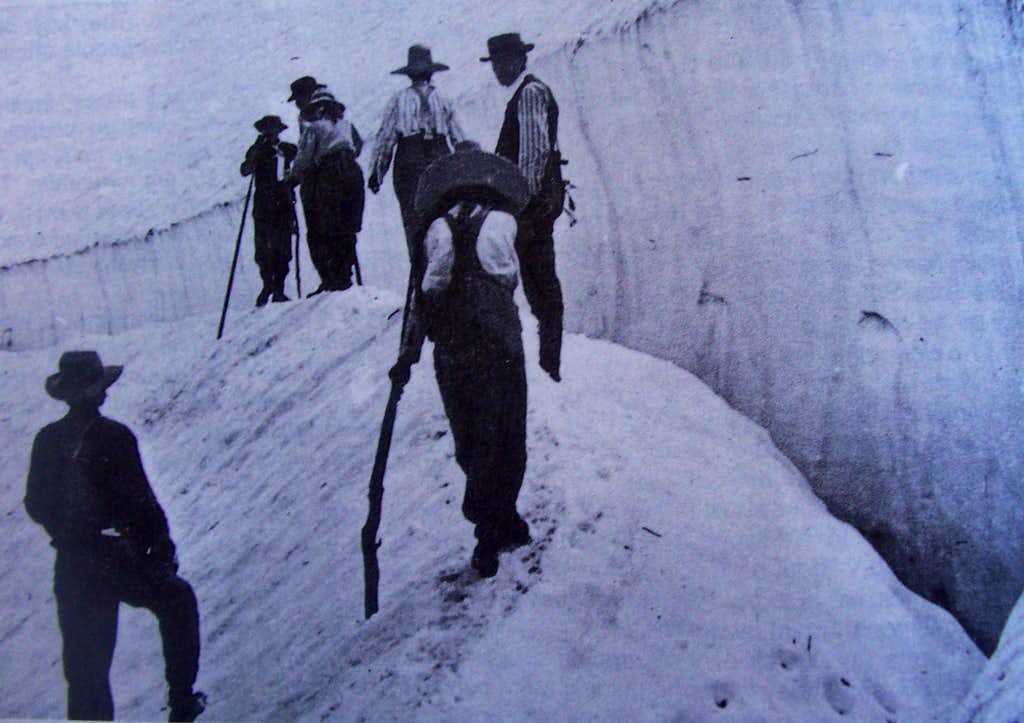 of this kind on this would-be Glacier last July. It was a high snow year, and only a chimney of the Emerald Lake shelter was popping thru the snow.

One group of fissures circled the lake - it was just the lake ice caving in of course. A much wider fissure, more like the one in this image, emerged from a partial collapse of the cornice some 10 ft below the Glacier Saddle.
Although neither place seem to be an exact match of this image (lakeshores are generally less steep and the saddle is somewhat more steep), my point is that you don't have to have a glacier to see crevasses.

Indeed. There were also some small bergschrunds and "crevasses" in the heavy snow year of 1993 (look close upper right of my photo where the sun meets the shadow).

Below is a "crevasse" in Colorado last year:

Old timers tell of at least three "real" glaciers that existed in Utah before the 1930's. The Timpanogos, American Fork Twins, and Red Castle Lake apparently all had genuine glaciers 100 years ago. The book Canyon Country Geology states that glaciers even existed in the La Sal Mountains as late as the 1800's and at the end of what was known as the "Little Ice Age".

"Old timers tell of at least three "real" glaciers that existed in Utah before the 1930's. The Timpanogos, American Fork Twins, and Red Castle Lake apparently all had genuine glaciers 100 years ago."
What is your source for this? If this is true it's a very important piece of information, but I haven't seen references to recent glaciers at American Fork Twins or Red Castle Lake anywhere but here.

There is probably a glacier on Lone Peak, at the head of a rock glacier across the ridge from Lake Hardy. On a Google Earth image from 2006 you can see a crevasse.

That information came from reports/books I dug up in the Salt Lake City Public Library or University Library during my college days, but unfortunately that was 24 years ago and I don't remember the sources. I also moved to Colorado in 2001, so haven't kept up on issues concerning the Wasatch history since then. From what I remember, one report said that the now rock glaciers on American Fork Twins and at Red Castle Lake used to have small crevasses in them in the early part of the century.

PS, you seem really interested in this and since I assume you still live in the area, maybe you would like to co-own this page and can update it with any new info you find? I can make you co-owner or editor of this page so you can edit it if you would like. I only ask that the article isn't meant to be political, but only as historical interest.

PS, now that I think about it, I do remember the source of the following:

One trip report from 1912 makes the statement that the glacier had “a series of beautiful crevasses” to pass on route to the summit.

This one was printed in the first edition of the Hikers Guide to Utah, by Dave Hall.

If you (or anyone else) finds some reports of any crevasses later than 1916 (the latest year I was able to find such reports), I'd be interested to hear.

Also, I'd be interested in seeing the crevasse located north of Lake Hardy. I don't see it on Google Earth. Is it just below the rim of the Thunder Bowl? I believe that there is an icefield in the Thunder Bowl that you can even see from parts of Salt Lake Valley if you know where to look, but in drought years, the dirty ice is nearly covered in rocks, so you have to be close to see it.

That would be great! And yes, I would keep the political stuff out of it.

It's not in thunder bowl, it's in a cirque to the southeast, at the east end of hogum fork. It's at the head of a rock glacier that has a very tall debris slope at the end of it. If you still can't find it just look around that area in the 2006 image with very little snow.
I have the screenshot on Instagram, here's the link:

I can't seem to find it right now, but there was a small newspaper article from 1946 about how a woman fell into a crevasse on the timpanogos glacier and was rescued.
Also, is there an archive of reports for the annual timp hike? If so, where is it? If not, where are the reports you are getting your information from? I'm currently trying to determine of the crevasses you mention are true crevasses from glacial movement, or "pseudo crevasses" like ice caving in around the lake or cracks formed from snow melting over jutting rock. (like in the 1993 image)
EDIT: Found it!

Nice find. Anyway, I am leaving for South America right now, but will get in touch with you when I get back on Feb 1.

Are you back yet?

Yes; just got back Monday. You now have shared full control of the page.

I wonder how many people have seen that crevasse you point out in person? I wouldn't mind checking it out.

The original photo in the BYU photo archives says 1907, not 1908, and says the photographer.

Thanks. I'll change it. Kelsey's book says 1908, but it has a question mark next to the photo.

PS, do you know the photographers name? Since the photo is in the university archives, I believe that it is public domain, but I'd still like to credit the photographer if possible.

Page won't load right now, but the BYU photo archives are online. Just look up "timpanogos" on their site and this image and the name of the photographer should be there.

100 Years on the Timpanogos Glacier(Article)