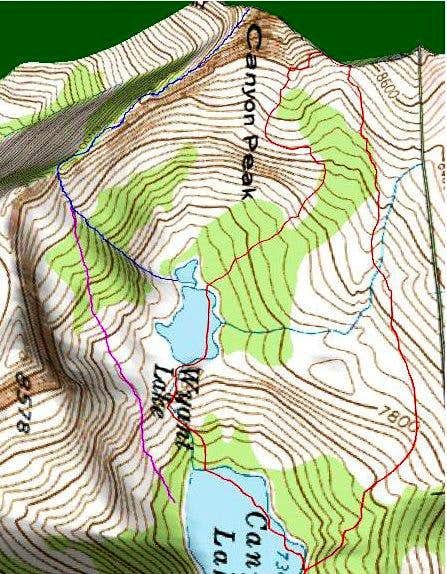 I just summitted this peak yesterday. I made a loop by starting at Blodgette and hiking up to High Lake, then up and over Canyon Peak, and down Canyon Lake Trail, then followed the roads back to my car at Blodgette. It was a great hike, though super exhausting. I did not expect Canyon Peak to be as big of a deal as it was. I worked really hard to get up to the ridgeline and then even harder to find a good route up. I ended up on the ridgeline to the south of the peak and slowly found a way through the rock to the summit. After summitting I followed the ridgeline down and out towards the East to a saddle that took me down to Wyatt Lake. That ridgeline has a lot of exposure, in some places it was like being on a knife's edge. I'm pretty sure your purple route is pretty close to the one I followed.