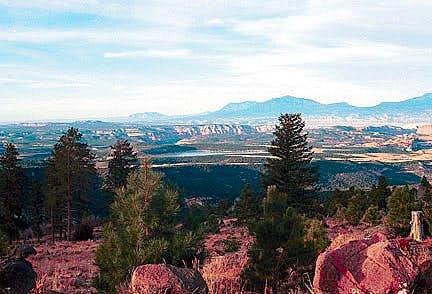 Lower Bowns Reservoir, located in Utah's Garfield County, is an intermediate- sized reservoir of 90 acres. At an elevation of 7,450 ft, the reservoir sits in a depression on a long, forested slope that begins at over 11,000 ft at the crest of Boulder Mountain, an eastward extension of the Aquarius Plateau. From the plateau's top at 3,300 meters, the land drops off to the Waterpocket Fold in Capitol Reef NP at 1,600 meters. Lower Bowns Reservoir is near the bottom of the slope, just a short distance east of Utah's Hwy 12 or U-12. Surprisingly, the greater part of this area's annual precipitation falls during July, August and September in the form of rain. This often comes in cloudbursts (with violent lightning) that release so much water onto non-absorptive rock that it collects rapidly into countless drainage channels, pouring into the larger washes and eventually the Fremont River. Streambeds that are normally dry may then witness short-lived torrents of turbid, debris-laden floodwater. In general, floods have not been as violent during the past few decades of reduced precipitation as they were 60 years ago, but they are always impressive and can still be dangerous. In 1994, my friend was killed by a bolt of lightning while eating his lunch on the east side of Lower Bowns Reservoir. In the distance are the Henry Mountains, with 11,615 ft Mount Ellen clearly visible (above the Ponderosa pine tree) in this view looking NE from the U-12 highway.
« PREV NEXT »

History in that area.

Named after a sheep/cattle rancher named Will Bown who was active in the early way back when. I'm so sorry to hear about your friend, so tragic. I tried to go from Fruita to Bown's Res via Pleasant Creek a year or two ago and that creek is anything but pleasant.

I love that area and I've summitted each of the five major mountains in the Henry's, I just have to keep going back. Nice job on your info above as always.

Re: History in that area.

Yep, thanks Dean. The area really stands out in my mind.

Funny, I've never returned to the area since my friend was killed in the summer of 1994.

Actually, I can (indeed) understand anybodies
reasons for going back there. It is such a
beautiful place, and is popular to all lovers
of the Great Outdoors.

Loading....
Thunder & Lightning - In Memory of An Old Friend(Article)