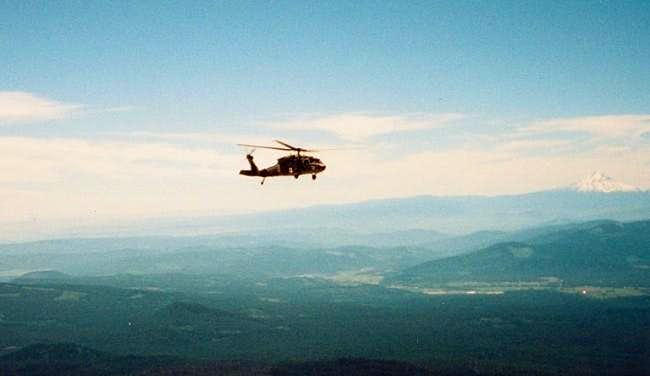 Just to sound a little anoying the helicoper is a Blackhawk not a Chinook.

The Chinook has two roters and is much bigger.

Ahh-Righto! But, roter is spelled rotor. Now who's a bit annoying?

They're the same airframe; PAVE refers to a bunch of upgrades, mostly to electronics. In particular, the "Pave Hawk" should have a FLIR mounted under the nose, alongside a radome and a mid-air-fueling thingy. I don't see those, so I think this is a BlackHawk. Could also be one of the naval variations (knighthawk , seahawk).

A bit of Googling shows that the Army has choppers at Yakima Training Center that have been used in at least one rescue on Mt Adams, in Sept 2018. I believe those are UH-60s (Blackhawk, not Pave Hawk). Who did your rescue in 2002, and what equipment they had then, I don't know.