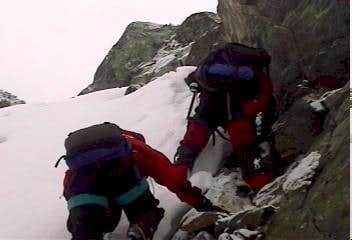 Expedition Outreach scrambles over one of the many rock steps along the icy ridge.
« PREV NEXT »

The right tool for the right job!

One of the problems with our first ascent was to figure out if we needed two technical axes each, or just one lightweight general mountaineering axe. Afterall; we are talking more than twice the weight with the technical axes... So we compromised, the Climbing Leader; Mike Daly, brought two lightweight technical axes. Mike broke trail through the steep snow, and even chose the line up the ice wall; he led it on day one while we were still setting up basecamp, with Fred Birchenough our photographer. They did a carry to high camp and returned to basecamp heros for having such ambition. I sure wasn't up for the task: The next day Mike Daly led the team up his route to high camp. On summit day we all switched leads. So Mike would lower one of his tools, letting another team member borrow it: Everyone else brought one technical tool, with an adze, which served as both a technical tool when necesary, and a fairly decent general mountaineering self arrest tool. The system worked like a charm on Mount Hope but it really took a sense of team work.