Ape's Head in Stone (with goatee) 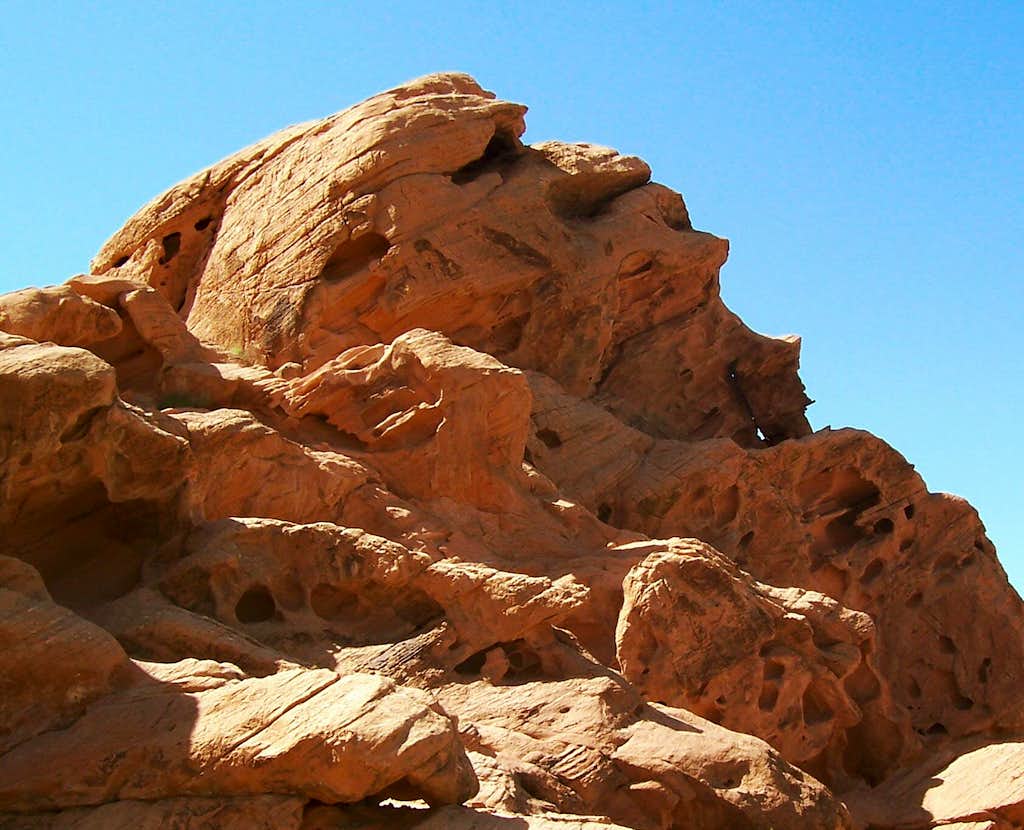 I'm suggesting that the sandstone has been eroded into what appears to be the HEAD of a full-grown ape or gorilla. At times, the Redstone Dunes area of Lake Mead Nat'l Recreation Area can be a real ... ZOO! Yes, this APE appears to be scanning the skies ... for UFO's! Or ... perhaps it's searching for a distant high point, to be included in its next Summitpost trip report. You be ... THE JUDGE! I'll be the man in the wilderness holding up MY camera. During the age of the DINOSAURS, between 65 million and 250 million years ago, these bright sandstone formations were part of a great sandy desert stretching from the west coast to what is now southern Colorado. Minerals "cemented" the shifting sand into STONE. For thousands of years, ancient peoples lived among the rock formations, leaving BEHIND mysterious petroglyphs and other artifacts to tell us of their lives. Makes ME wonder what the current "civilization" will be leaving behind. WalMart bags and Starbucks custom coffee mugs, I suppose! Southern Nevada - near Lake Mead. ~March 21, 2008~ Over and Out.
« PREV NEXT »

Guido ... thanks for the kind comment. I will be adding further info as far as the geology goes. It's a treasure cove for the geologist, as you well know. Take care!
- Larry

That's one great formation Larry!!
thanks for posting!

You're right! As soon as I have a moment, I will have a NEW trip report plus a unique rock formation I found near Lake Mead, NV. Please be watching and waiting. - Larry :)

thanks for attaching this photo. I like when other people participate in my albums. This one reminds me of a Kubrick's '2001:A space Odyssey'.
Darko

Thanks, Darko! It helps to have an imagination
when viewing such stone faces. When I am
viewing sights from faraway lands, they remind
me of Mussorgsky's stirring themes of
'Pictures At An Exhibition.' -Larry