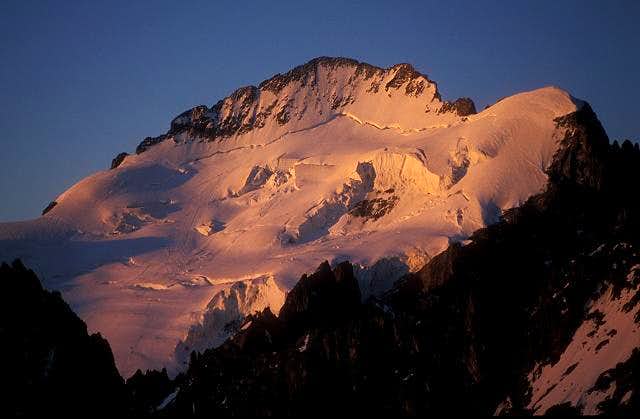 Barre des Ecrins and Dome de Neige north face as seen at sunrise from the ascent to Grand Ruine (close-up, August 2001)
« PREV NEXT »

For the past minute I've been tilting my screen back and forth (like an idiot) marveling the color changes it produces. Nice shot!

How avalanche prone is this slope?

Re: Lot of snow

Good question! This glacier provides the normal route both to Barre des Ecrins and Dome de Neige what is by far the most popular climb in the area.

There is a severe risk of avalanches of ice, but mainly on the right side of the flank under the seracs. Though it might be less steep there this part should be avoided even if there is a track (you can see a false track on the lowest part of the glacier!).

Under normal summer conditions – as they were when the picture was taken - there is no risk of avalanches of snow.

In spring season the ascent with ski is probably not as dangerous as it might look. I have been there with a mountain guide in April 1999 and we climbed Dome de Neige after some days with fresh snow while we had turned around elsewhere. I myself would not have dared to do it on my own because I could not judge the avalanche danger properly.

Thanks for this great shot!

First I thought that is sunset!

Chears and have a good one! Bor!

I think if you don't know the dirctions you cannot judge from the colors wether is is morning or evening. At least I could not.

Congratulations for your great photo of the week!

But if I tell you true..I more like your photo!!

Takes me back to summer 1988! Thanks! I concur with the above comments.