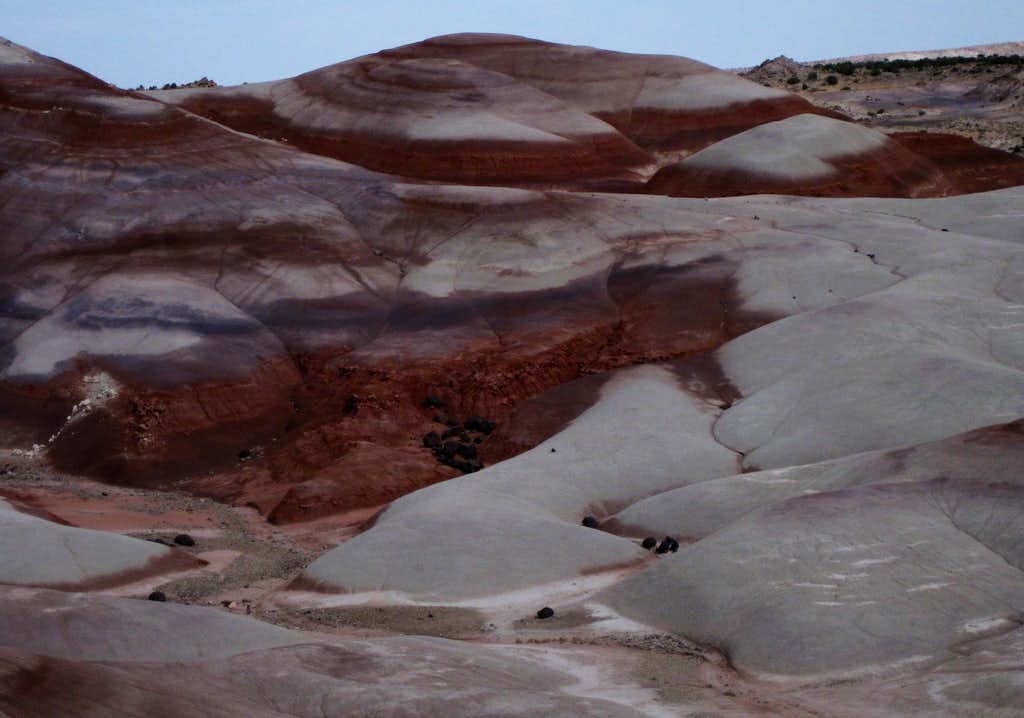 Seen from Hartnet Road, Utah-- October 2009 "Softly contoured and banded in shades of brownish-red, grayish-green, blue and purple, these rainbow hills resemble the Painted Desert of Arizona and the Badlands of South Dakota. They are similar, also, to the colorful Chinle slopes of Capitol Reef and the Circle Cliffs. However, they are not of the same geological age as those features. These colorful mounds are known variously as the Bentonite, Rainbow, or Painted Hills. They are encountered not only along the River Ford-Hartnet Road but on the Caineville-Middle Desert access road as well. They are among the most visually flamboyant features of the region. The Bentonite Hills appear to be rounded masses of clay. Actually, they are formed of layers of soft stone of various colors, the surface of which turns to clay when exposed to weathering. What is seen by the eye is a veneer of color-banded, popcorn-like clay, which obscures the basic rock layers beneath the surface. When wet, the clay absorbs water and becomes gummy and very slippery, making vehicle or foot travel difficult or even impossible: hence the warning to avoid areas of clay when wet or when rain or snow threaten. Technically, the Bentonite Hills are the Brushy Basin shale member (component) of the Morrison Formation (group of rocks). The Brushy Basin shale was formed by mud, silt, fine sand, and volcanic ash, laid down in swamps and lakes about 140 million years ago during Jurassic times. It contains a measure of bentonite, a useful clay consisting of aluminum and other minerals. The impure bentonite of this area has not proven commercially attractive. Also found in the Brushy Basin shale are dinosaur bones and petrified wood." Source
« PREV NEXT »

It is a surreal moonscape out there.

I see you were engaged atop Dana. Congratulations on that. I got engaged at Mono Lake, and when I climbed Dana a few years ago, it was cool to look out to the place where it happened!

I've been to Mono Lake too...that's a beautiful place to get engaged!