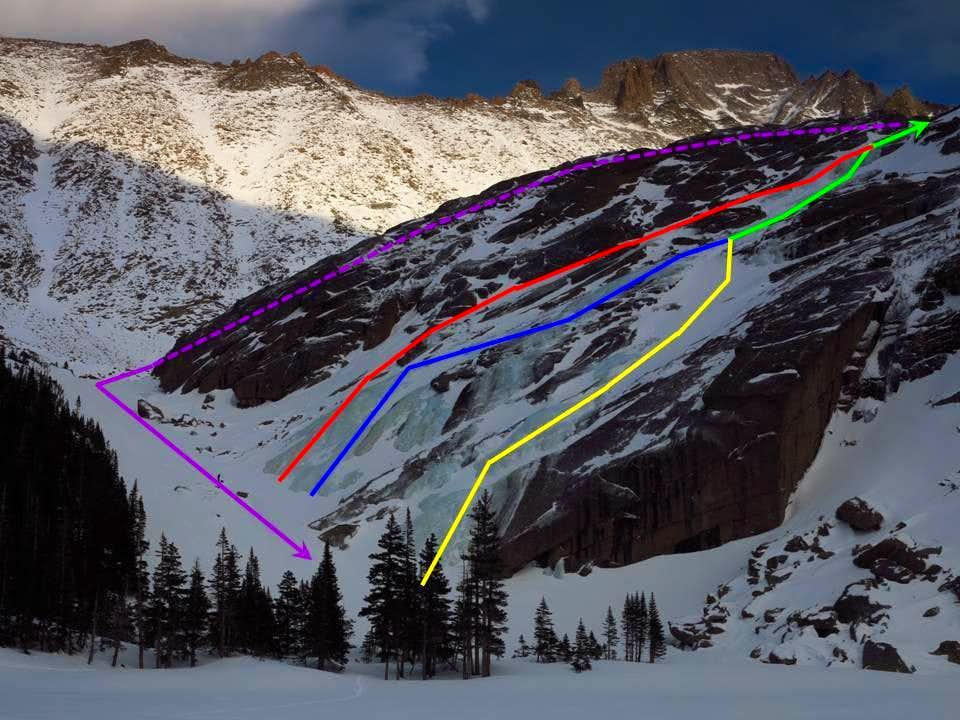 6775 routes and climbing description: The descriptions i have seen advise to make good use of the ice that is present on your visit to minimize the time climbing on snow or rock in between sections of ice. I had 11 ice screws, which worked well for protection and anchors. They could be all long, although i found it nice to have at least 2 shorties (10 or 13 cm). We followed the blue route to finish on the green. The climb was 3 pitches on 70m twin ropes. Another option that looked good on our visit was the yellow route (although it's tough to say whether there was ice present under the big patch of snow, below where the yellow route merges with the blue route. The trip report on climbinglife (http://climbinglife.com/ice-and-mixed-rmnp-mainmenu-56/51-glacier-gorge/289-black-lake-slabs) seems to suggest that the red route might be an option in prime conditions. The red route, however, was mostly rock on our visit. Again, the key is to take the routes marked in the photo as suggestions and make best use of the ice that is at the slabs when you are there. The climb goes up to a ridge that is an easy walk off (see also the topo map of the climbing area). To return, follow the purple line by walking towards (N40.26427 W105.63470). There was a lot of post-holing in the drifts up there, so try to use as much of the wind exposed rock as possible. We found the walk above the climb really windy and that is probably often the case there. If you are with a group, consider having the last climber cache skis or other flotation at N40.26463 W105.63423 for a quick escape down the climb from Black lake. Another option at the end of the climb would be to create v-threads and rappel. Keep in mind the climb might be as many as 4 pitches on a rope shorter than 70m. There was a reasonable amount of ice on our visit, but not as much as i have seen in other web photos. While the air was warm, the wind kept the ice cold. The ice was brittle: often resulting in small plates on first impact from ice tools; or chipping at the surface while first trying to place screws. The remote location means the surface can be almost featureless, because of lesser use. While I got solid placements in the alpine ice, it required some extra work that you would not necessarily need in a lower elevation or ice park location.
« PREV NEXT »
dvdcmiller
Lat/Lon: 40.26352°N / 105.63825°E
Image Type(s): Ice Climbing
Image ID: 890147