After years of listening to tales about the beauty of the North Fork Boquet, I ventured in to see for myself on May 2. I bushwhacked along the river via the herd path from the stone bridge (2.5 miles from Chapel Pond) to Round Pond. The lazy hairpin turns and view of a snow covered Beckhorn Slide on Dix on May 2 (it was snow free by May 9) made a lasting impression as did the canyon proper and a cliff band to its north. Bushwhacking after the crag was through pleasantly rolling forest with a little snow left in shadowed pockets.

I reversed the route on May 9th with friend/climber Hunter Lombardi. As with many trips, inspiration during one trip can lead to bigger things in subsequent days–the May 2 trip certainly inspired the rock climbing bug in me. To quote Adirondack Rock, “This area was first explored for rock climbing by Tom DuBois.”—thanks TCD!ADK Rock also lists two technical climbing routes in the gorge. The first ascent in the area belongs to Tom and Ellen DuBois, a route appropriately calledTurbulescence—a nice line near a turbulent pool and cascade in the gorge
.
Hunter and I locked our sites on exploring a few cliffs north of the canyon proper. Armed with full climbing packs, we began our day at the Round Pond parking. The 46r trail crew was just arriving for their annual cleanup day [nice to see Pete Hickey and Brian (Pathgrinder)].

We followed the trail past Round Pond and over the height of land. A small log bridge crossing a stream was the cue to leave the trail to the left. We followed it until I could hear the North Fork Boquet and then struck a heading of about 150 degrees magnetic. The river was our handrail though at a distance.

An hour and a quarter from the trailhead, Hunter and I arrived at a small exposed knob north of the canyon, still about 15 minutes away from the northern-most cliff on our itinerary. Most of the route possibilities I saw during the first trip looked beyond my ability, but there were a couple that I hoped might be attainable. 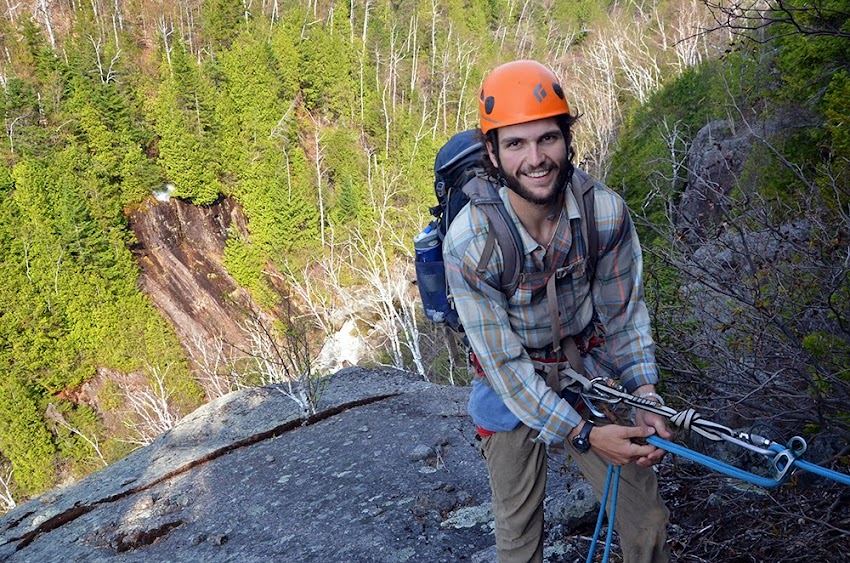 Hunter Lombardi on top of our first route. What a setting.
I should have followed the river more closely since we popped out of the woods on top of a terrace overlooking the canyon proper. We were standing on top ourobjective; the forest floor was 70 feet below and the river was slightly downhill from there. What was the objective?—A large shark fin shaped roof of anorthosite. I felt my pulse quicken as we rappelled to the base in hopes that it would be drier than last week.

The chute down which we rappelled immediately struck me as a possible line. Hunter found a good, if not harder, possibility about 50 feet south. Pieces of talus, large and small, adorned the ground. Large pieces fallen in ages past led down to the river and large swimming hole. Yeah, it’s a beautiful setting whether you’re a climber, hiker, hunter or fisherman!

New Climbing Routes
My hopeful line looked comparatively easy so it served as a good starting point. The packs lightened as we pulled out the rope and rest of the gear. The first ten feet ascended a slightly overhanging wall with nice hand cracks. I then climbed up and slightly right up to a small ceiling—a narrow block of stone above a slot in the wall. I held myself in place with feet stemming (spread apart and placed on adjacent walls). There was plenty of clean rock to work with though moss and lichen were also part of the game.

I contemplated how to break through the ceiling and decided to move right where it was broken by a small slot (about leg width). I threw my right heel high onto a small ledge and worked my left leg into the slot as I stabilized myself with the other hand on another small (12 inch) ledge. I cleared a little moss from around my foot and looked down some 40 feet to Hunter belaying from below. I was on a comfortable stance and needed a rest so he took a photo to capture the moment.

I looked around and realized that I was next to a huge corner formed by the side of the roof. I felt small next to this wall of clean anorthosite. It was turning into a dramatic line with several interesting moves. I moved up higher after cleaning moss out of some finger sized cracks leading up to a large piece of stone—freestanding but embedded deeply. I leaned against it as I again rested. A few more minutes of climbing up a wide slot led up onto the terrace from which we first rappelled.

Hunter followed belayed from above while enjoying the view, the warmth and the sound of the river—a dramatic start to the day. We rappelled down and cleaned a few loose stones off the route. After thinking about it, I felt it deserved a light-hearted yet descriptive name—“Talus About the Crack”. We rated the 70 foot line at 5.6 YDS. 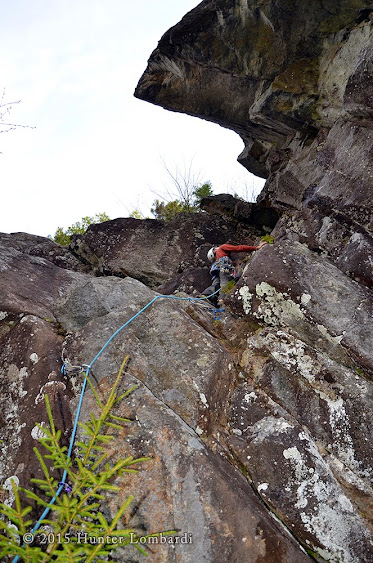 Kevin leading Talus About the Crack.
Below, full perspective of the shark fin roof. 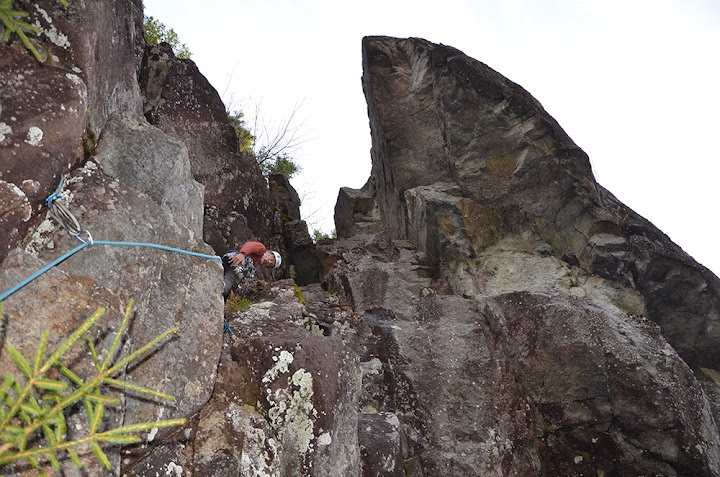 Back at the base it was Hunter’s turn to lead. He eyed a more difficult route under a long ceiling left rising ceiling. The start was difficult to protect (against a fall) and too wet. Thus we walked 300 feet north where the cliff was drier. There were plenty of new route possibilities along the way, but they’d require some cleaning and time to dry out...something for a future. The cliff band soon curved gently to the east and we crossed a small gully. An extension of the cliff continued north—it was quite dry.

Hunter spotted an appealing crack about 15 feet up on a vertical face; I laughed because it was a feature that jumped out at me a week prior as I walked by. We removed some loose flakes and Hunter set to work as I belayed.

Hunter describes the climb:
"After knocking off some of the large but noticeably detached rocks from inside and around the crack through the triangular ceiling from which I started, I began climbing. The moves off of the ground were fun, good hands with stemming feet. I found myself questioning whether or not we had missed a few loose holds, and if I would detach a hold and hit the canyon floor. I had already done that once earlier in the day.

However, the rock stayed true and a good piece eased my mind. As I got to the crack, I sunk in a great hand jam, placed a piece, and began working through the fun, although short, series of moves. Once the crack petered out, I was able to grab one more piece of protection before mantling up on the ledge about 20 feet up.

I began tackling the left-rising rail, working the positive holds. I was able to place a crucial blue and black alien (cam) into a small crack after another 10 or so feet up in order to protect the top out - which offered some of the more thought-provoking moves of the line. The talus-covered ledge contained a nice cedar tree to build an anchor off of, and after Kevin joined me, we walked off climber's right."

Hunter named the route, “Mama’s Boquet” in honor of Mother’s Day. The line was 40 feet long which we rated 5.7 YDS. 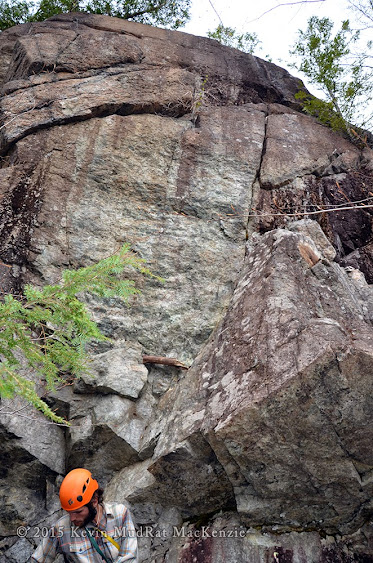 Hunter preparing to lead Mama's Boquet-follows crack next to his left shoulder.
Below, swimming hole below the cliff. 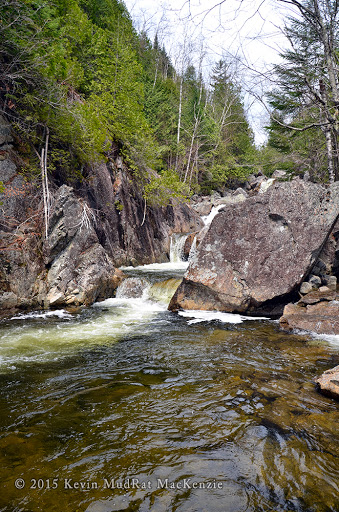 Canyon and Exit
The rain and storms in the forecast held off nicely though it sprinkled for a few minutes while climbing the second route. Thereafter the temperature spiked into the high 80’s/low 90’s. Visiting the river for lunch was a welcome respite as the temperature significantly dropped near the water...hold-out pockets of ice still adorned the sides in several locations.

Around 3:00 pm, we decided to look at Hunter’s proposed line near the “shark fin” to see if it had dried; it hadn’t so we continued south through craggy terrain to the top of the chokepoint in the canyon. Graceful sweeping cliffs loomed above as the river roared through the constriction. A huge boulder in the center made the perfect perch on which to eat a snack and take in the beauty. We then bushwhacked to the top and found a nice view of the cliffs on which we’d climbed. The tip of the roof was barely visible.

Several hundred feet south we found a gully and dropped back down to the river in search of the pre-existing Boquet Canyon technical routes. They were on a wall near the bottom of the constriction, a beautiful and loud location. We briefly discussed climbing one of them, but felt satisfied with what we’d already done and the time was 3:30 pm.

We walked south after re-climbing the gully and trekked high above the river until it began its lazy traverse through the flatlands. The hard part of the day was over, it was time to relax. I found it amazing just how different the area looked by reversing the loop even though I’d walked it only seven days prior. I recognized each location, but saw different details. Several deep holes and flumes looked like they’d offer great fishing; something for my father to enjoy over the summer.

We arrived at Route 73 a bit before 6 pm and then at our cars by 6:30. That was eleven hours well spent on a new adventure. There’s plenty of open space for new routes, you can be sure we’ll go back. 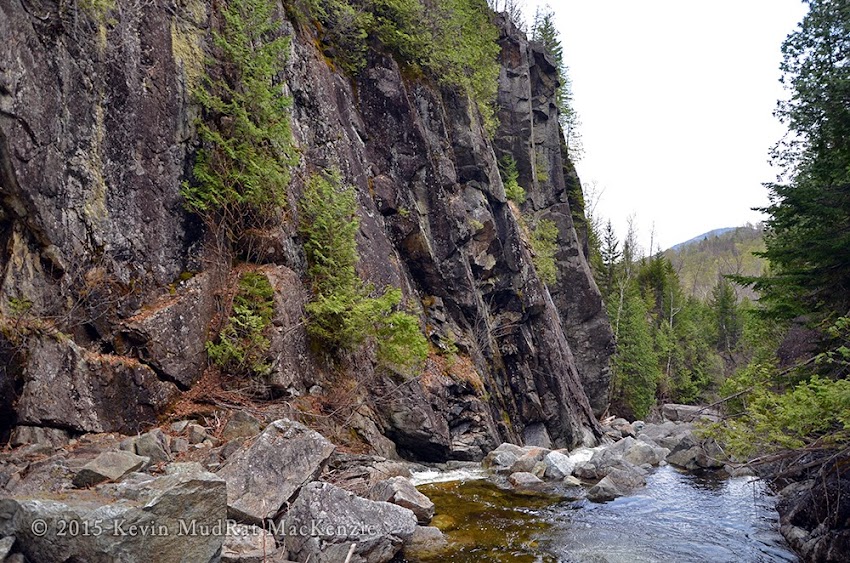 Looking south down the canyon. 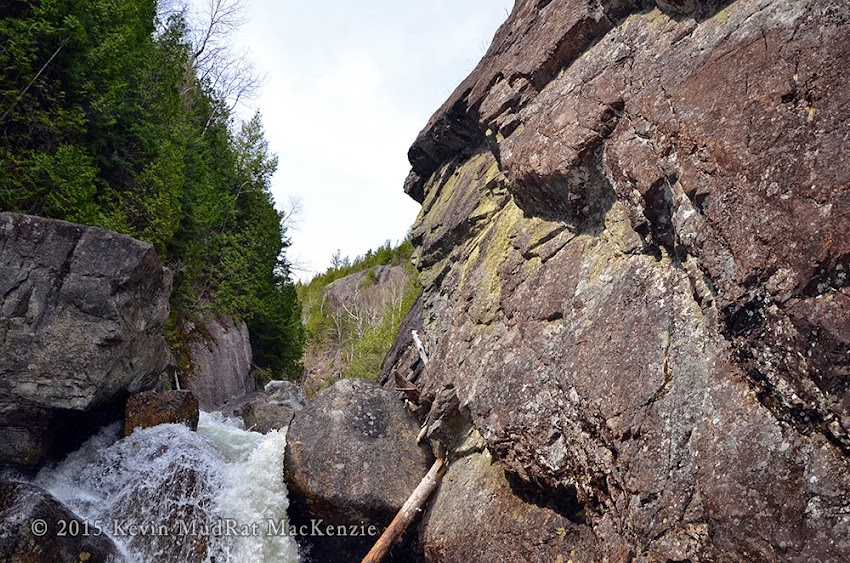 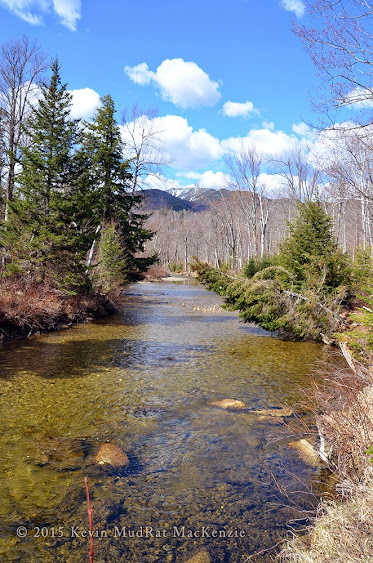