Boulder Ridge is the high peak that stands north of Cloudy Peak, Warrior Peak, and Mt. Constance along the eastern escarpment of the Olympic Mountains of Washington State. Like all of the peaks in this area of the Olympics, it is composed of "pillow lava." Pillow lava is created from basaltic lava flows which are erupted and cool underwater, thereby making the distinctive pillow shape. Pillow lava is not especially good for rock climbing, but makes for interesting needle-like formations, such as the "Ridge of Gargoyles" to the East of Boulder Ridge.
Boulder Ridge is among the more accessible Olympic Mountains. The approach trail up the Big Quilcene to Marmot Pass is only 5.5 miles, and the climb from Marmot Pass to the summit is only another 2 miles, making a one-day summit attempt feasible. This is in stark contrast to most mountains in the Olympic Mountains which require very long approaches and multi-day outings. Situated on the northeast side of the Olympics, Boulder Ridge lies in the "rain shadow" of the mountain range, and therefore is drier and will open up a little earlier than other part of the Olympic Mountains. For this reason, Boulder Ridge can be an early season attempt.
From its eastern vantage point, the summit of Boulder Ridge affords great views of Puget Sound, Mt. Rainier, Mt. Baker, as well as views across the Dungeness River to Mounts Mystery, Deception, the Needles, and the Graywolf Ridge. But most striking is the rugged view south to the Constance and Warrior Peaks dominating the scene. 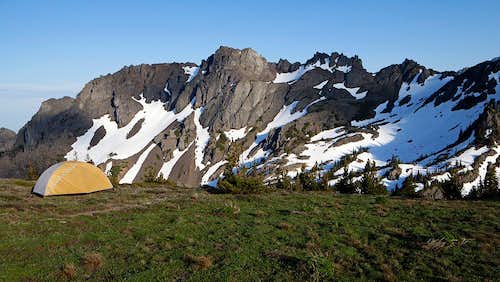 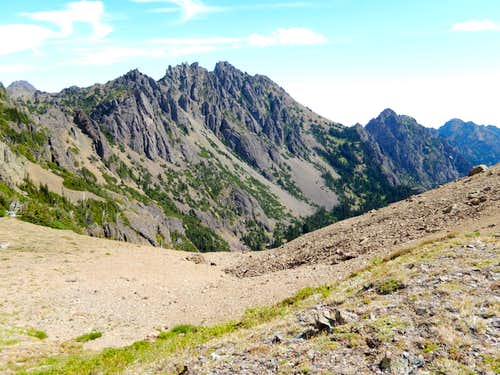 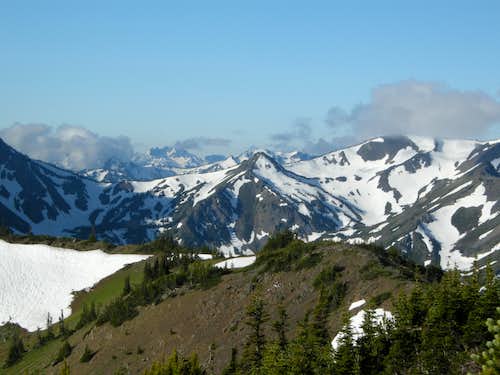 Hike the Big Quilcene Trail 5.5 miles to Marmot Pass (6000 feet). About 1 mile below Marmot Pass, there is good camping at Camp Mystery (5400 feet). Although there is running water here, as long as there is snow for water, better camps lie above just below Marmot Pass, where snowbanks can feed water sources well into August. At Marmot Pass, look west into the heart of the Olympic Range. There are close views of the Royal Basin peaks (Deception, Hal Foss, Fricaba), as well as Mt. Mystery and Graywolf Ridge. Now turn south along the ridge along a broad walkway with boot paths etched into it most of the way. Reach a high point (about 6400 feet) above Marmot Pass, and your first views of Boulder Ridge come into view, as well as dramatic views of Mounts Warrior, Constance, and Inner Constance to your south. 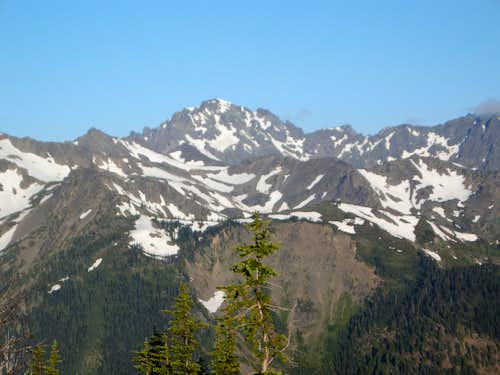 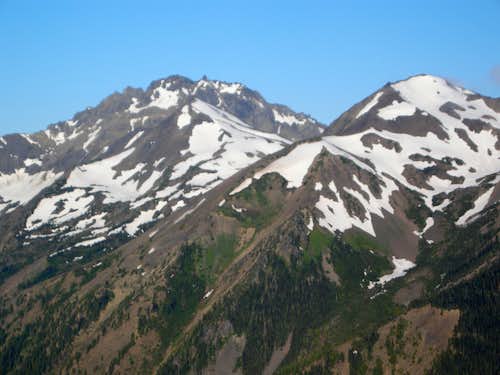 Looking towards Mts. Hal Foss and Fricaba. Mt. Mystery behind. 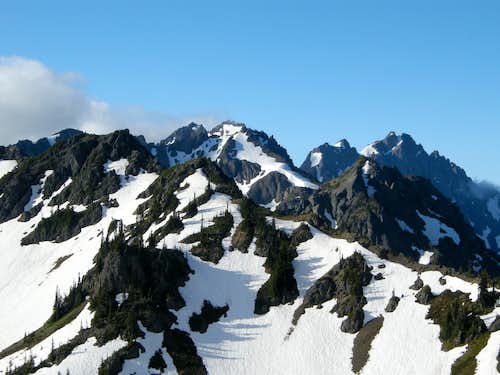 Constance/Inner Constance from near Boulder Ridge 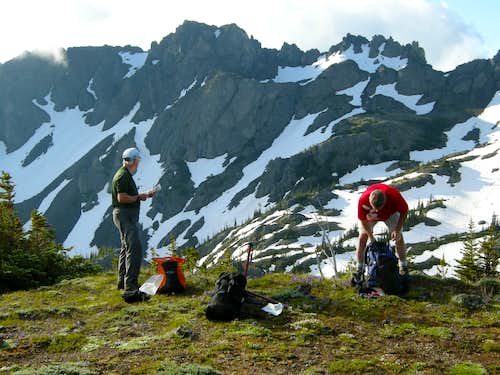 Route-finding at 6400 feet. Boulder Ridge from above Marmot Pass
From the promontory at 6400 feet, drop into the basin to your south. It is possible to run the ridge higher around the basin, but difficult terrain will likely force you to drop into the basin at some point. Hike across the basin on snow in early season, heather in late season, and arrive at some short cliff bands that are easily negotiated through gullies. 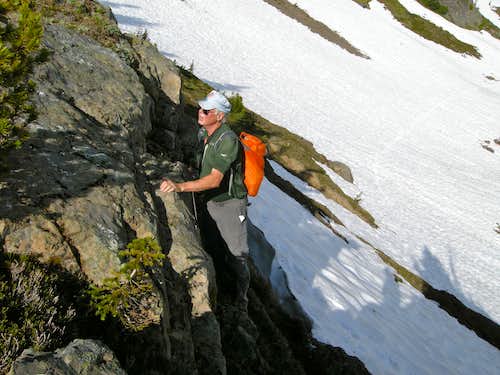 Climbing up Boulder Ridge through easy cliff bands
Climb due south into the upper basin to the northwest of the summit of Boulder Ridge. At this point, a large snowfield will need to be traversed to the east. Depending on how hard the snow is, this can be a challenge. If you are concerned about hard snow, crampons or micro-spikes may be useful here. 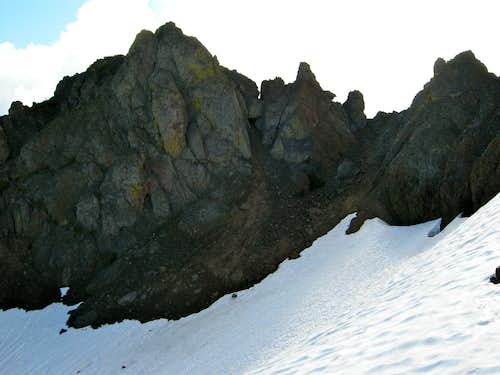 Upper Snowfield and access gully on Boulder Ridge
Aim for the obvious gully on the west side of the summit block. It is loose but fairly easy to negotiate. There are two exits at the top of the gully. The right exit (west) is a dead end. The climbing route is through the left exit. 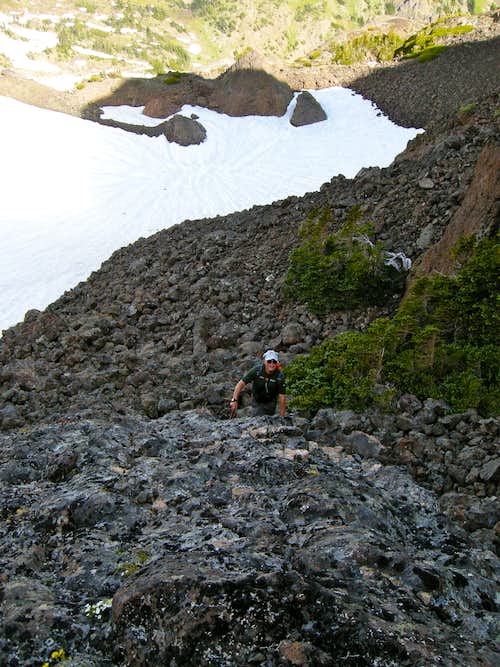 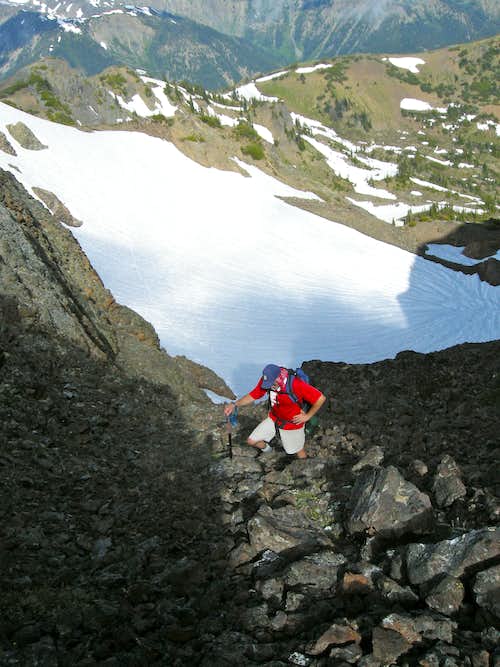 Climbing to summit ridge of Boulder Ridge
Turn left and hike easy Class 2 (and maybe a little Class 3) terrain to the summit. There are great views over towards Cloudy Peak and Warrior Peak to the south. Arrive at summit about 200 vertical feet above the gully exit. 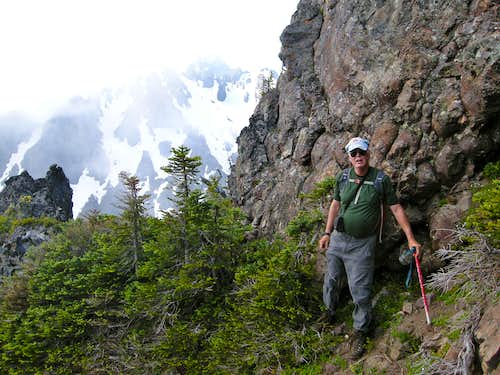 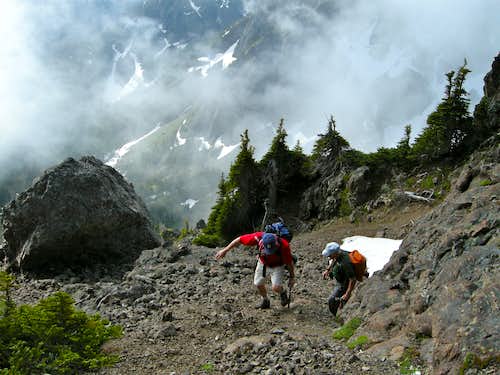 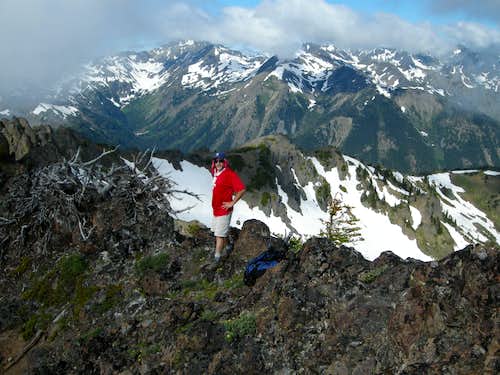 Boulder Peak itself lies within the Buckhorn Wilderness and outside of Olympic National Park. But if parking a vehicle at the Quilcene, Tubal Cain, or Dungeness trailheads a Northwest Forest Pass ($5/daily, $30/annually) is required. An interagency pass ($80/annually) will also work here, as well as at all US National Parks. When hiking up the Big Quilcene River trail, Camp Mystery below Marmot Pass makes for a fine basecamp, as well as a higher camp at Marmot Pass if water is present. 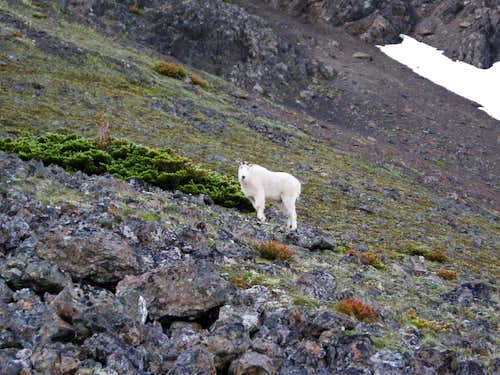 If heading into Olympic National Park, you must also obtain a backcountry permit to camp in the park ($5.00).

For camping and trailhead information, check out the park website at: