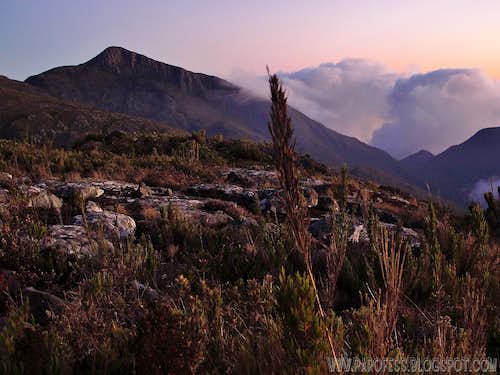 Caparaó NP
The Caparaó National Park was created in May 24, 1961 by Federal Decree. It houses the third highest peak in the country, Pico da Bandeira (in english that would be Flag Peak). It is administered by the Chico Mendes Institute for Biodiversity Conservation (ICMBio). The Park has 31,853 ha.

The park is located on the border between the states of Espirito Santo and Minas Gerais and covers seven cities, four of them on Espirito Santo side and three on Minas Gerais side. About 80% of the park is in Espirito Santo state. The highest peaks set the border between the states, highlighting Pico da Bandeira, with 2.893 meters (9.491 feet) and Crystal Peak with 2.769 meters (9.085 feet), this one is the only one 100% inside Minas Gerais state. The park also houses other peaks, smaller in size, but also of considerable altitudes for brazilian lands, such as Cruz do Negro Peak - 2.658 meters (8.720 feet), Pedra Roxa Peak - 2.649 meters (8.691 feet), Tesouro Peak - 2.630 meters (8.629 feet), Tesourinho Peak - 2.584 meters (8.478 feet), and the Girl Rock - 2.037 meters (6.683 feet), all in Espirito Santo state.
A lot of potential for this park, as you can see here, there is only 7 mountain pages here, and those are the main mountains of the park. But, as several parts of the park are in forbidden areas, I believe that it could have at least other five summits named and measured. But this is a future job for me and the mountaineering community here in Brasil. As you can see, the photo below shows virgin areas of the park, only here, we can see two possible summits that could be named, peak shapped, and with some good proeminence from the two main ridges that you see. (wo prominent peaks at the left part of the ridges):

This park is one of the most representative areas of Atlantic forest in this state, which in addition to covering much of the Serra do Caparaó, is also found on the slopes of the Castle Mountains, Forno Grande and Pedra Azul. The Caparaó Sierra is a branch of Mantiqueira Mountain range, linking up with the Brigadier Sierra and Pai Inácio in Minas Gerais state.

A little bit of History: Around 1859, Emperor Dom Pedro II was determined to put a flag of the empire on the highest peak of Caparaó Sierra. It is believed that the name of the peak comes from this fact.

Caparaó Sierra was aldo war ground in Caparaó Guerrilla in a period of political instability, which occurred in 1964. In 1967, Caparaó militia was defeated by the Military Police of Minas Gerais and not by the Army, who arrived after the Military Police Battalion in Manhuaçú village reported the arrest of the revolutionaries. The warriors, already weakened due to the harsh climate and the difficulties of survival in a place so inhospitable back then, were denounced by the owner of a pharmacy in the city of Espera Feliz to military police detachment site. These officers reported the incident to the command of the battalion in Manhuaçú, who sent only a few men which was at the scene and arrested them.

Great mountains of the park!

Sunset on some of the highest brazilian summits

The park lies on the border of Minas Gerais and Espirito Santo, and 79.4% of its area is within this state. Its coordinates are 20º19’—20º 37’ S and 41º43’—41º53’ W. The region of the park is situated 300 km from the capital of Espirito Santo state, Vitória, with access from the town of Pedra Menina ("Girl Rock") in Dores do Rio Preto, and 340 km from Minas Gerais state capital Belo Horizonte, with access by the small village of Alto Caparaó.

The average elevation of the surrounding cities is 997 meters at its lowest elevation, reaching inside the park 2.893 meters in Bandeira Peak, this being the third highest mountain in Brazil.

NOTE: Just by curiosity, if we consider only peaks 100% inside brazilian territory, Bandeira Peak would be the highest peak of Brazil, since Neblina Peak is inside a park that we share with Venezuela. A little bit different than Mount Roraima, which I myself don't consider a brazilian summit at all since only 5% of its territory is inside Brazil, and people still say that it is a brazilian mountain. Even the trekking is done at Venezuela soil. Well...Just saying...

The climate is altitude tropical, the temp variation has mild temperatures, with annual averages between 19°C and 22°C, but this mountainous region has lower average annual temperatures in the areas of higher altitude.

The summits inside the park are very cold places, some of the coldest spots in Brazil, the temperature can vary from 25°C to -10°C, while in the winter, we record frost and temperatures -4°C daily, but there is a park guide who claims to have registered a temperature of -14°C in Bandeira Peak (it was not considered an official mark, but it is entirely possible). At the foot of Crystal Peak there is a lake where there is a register at least one day per year with ice cover.

Main photo: Cristal Peak, one of the most beautiful brazilian mountains (my opinion)

Years ago there was a project named "Projeto Pontos Culminantes do Brasil", back in 2001. In part it was good because they redid the measurement for all the brazilian high summits between 2004 and 2005 when the project was finished, but something went wrong here. It was released as new info that Caparao National Park holds “new peaks”. In my opinion that was a bad joke. In fact when you read something like this you think "what the hell, did they found a new mountain out of the blue or an earthquake formed a new one?"

Naturally it’s considered mountain an elevation that separates by another one by a valley, a natural flaw of the terrain. This flaw has to be at least 300m deep so the next one (this is a brazilian rule dictated by IBGE - Brazilian Institute of Geography and Statistics - I believe each country has a similar thing with different rules), even smaller, can be considered as a mountain. There is other solution, there has to be a considerable distance between the summits, let's say 1,5kms (around 1 mile). We all know about this here and it's called prominence. The image shows that quite nicely. The highest point of the massif is point C, and the second highest is point A. If the prominence of point B is higher then 300 meters, so it is a mountain, if not, it isn't. Hold on to this.

What they did was a bad joke. There is a ridge between Cristal Peak and Bandeira Peak. This ridge has exactly (on a straight line) 2 kms. Very, very close to Bandeira Peak they called “Calçado Mirim” (means little Calçado) a small elevation that rises just 30 or 35 meters above the traverse trail. “It’s a new mountain” they said. The thing is, the distance between Bandeira Peak and Calçado Mirim is just 180 meters. Ha! Ha! Ha! Sorry, this is NOT a mountain.

They kept going. Just 500 meters after that, on the same ridge, they created another one, and named “Pico do Calçado” (Calçado Peak). It rises just around 45 or 50 meters above the trail line. Sorry, this is NOT a mountain.

Calm down, not over yet. They did it again! Right beside Calçado Peak, there is another small elevation that rises around 40 meters or so again, and they named “Pico N° 2” (number 2 peak – I guess the guy ran out of stupid names ah?). This one is just 210 meters from the last one, Calçado Peak. Sorry, this is NOT a mountain!!!

The ridge goes on...and after 1,3 kms more (more or less), the beautiful Cristal Peak points out to the sky, gorgeous mountain. This is in fact a mountain.

So, maybe some people can question why I didn’t put them here or why I didn’t listed them on my page as some of the highest brazilian summits. Well, not mountains, simple as that.

Several fresh new mountaineers believe in the measurement and say that it's right, that there is Pico n°2, Calçado Peak and Calçado Mirim Peak, but every single mountaineer that understands those questions doesn't accept the idea. Hell, IBGE itself doesn't accepted it! No, according to brazilian rules these so called "new mountains" are not mountains at all. Period. 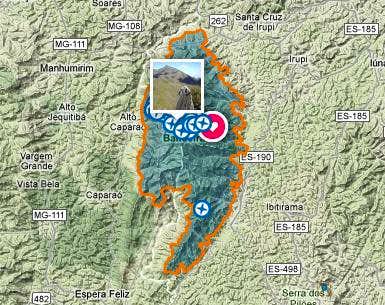 Protected Area of the Park.
The park attracts many tourists, hikers and climbers, especially during the winter holidays. Tourists come mainly in search of cold weather, and to reach the summit of Bandeira Peak on account of his known views of the sunrise on the summit of the mountain, or at Crystal Peak. There are also those who come in search of tranquility and just sleep at the moderate altitude of Brazil, looking for fresh and clean air. The cities have unspoiled landscapes of both sides. Untouched by man so far.

Its main access is the entrance in Pedra Menina city (Espirito Santo State) where it gets to Casa Queimada campground, the trailhead via Caparaó-Capixaba to Pico da Bandeira, and the entrance of Alto Caparaó village (Minas Gerais) with the road to Tronqueira campground at 1.970 meters, where the track begins to high camp Terreirão at 2.370 meters high.

From Belo Horizonte, take Highway 262 (Vitória-Minas) to Realeza city, past the junction BR-262 and BR-116 roads, continuing until the junction of BR-262 and BR-111 at Reduto. From this it follows up High Jequitibá (Minas Gerais), where it starts more 12 kms on asphalt to Alto Caparaó.

Important, if it's a holiday here in Brazil (we call it feriadão), you must do a reserve before, or you might get stuck at the park entrance.
Reservation url: http://www4.icmbio.gov.br/parna_caparao/index.php?id_menu=165 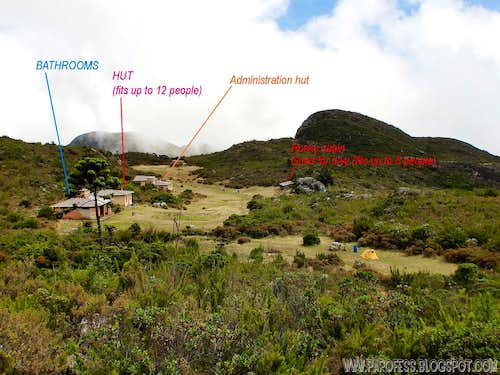 There is some camps for the park: 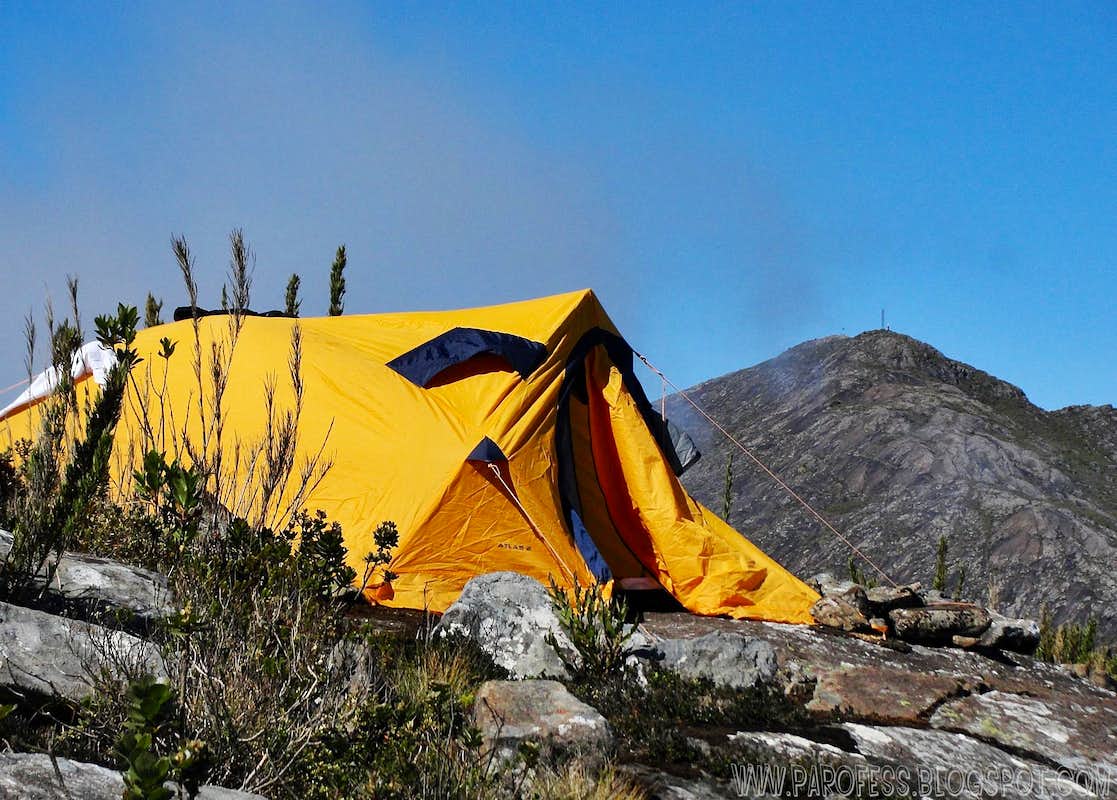 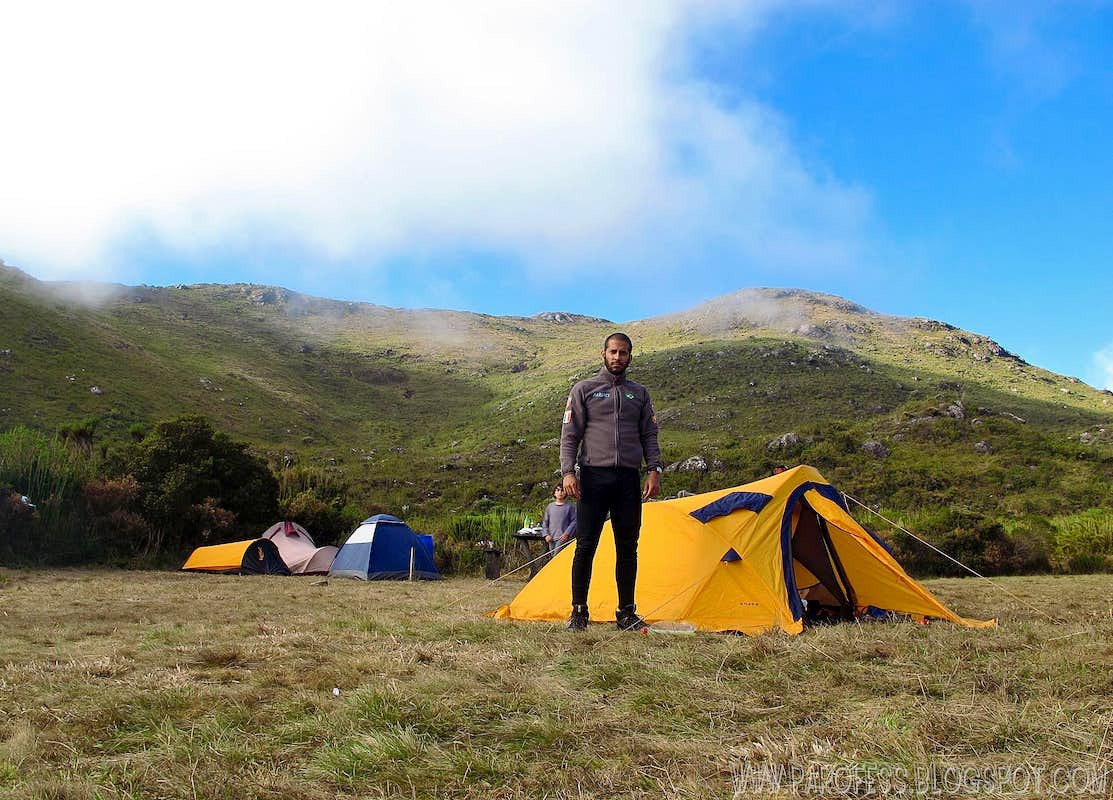 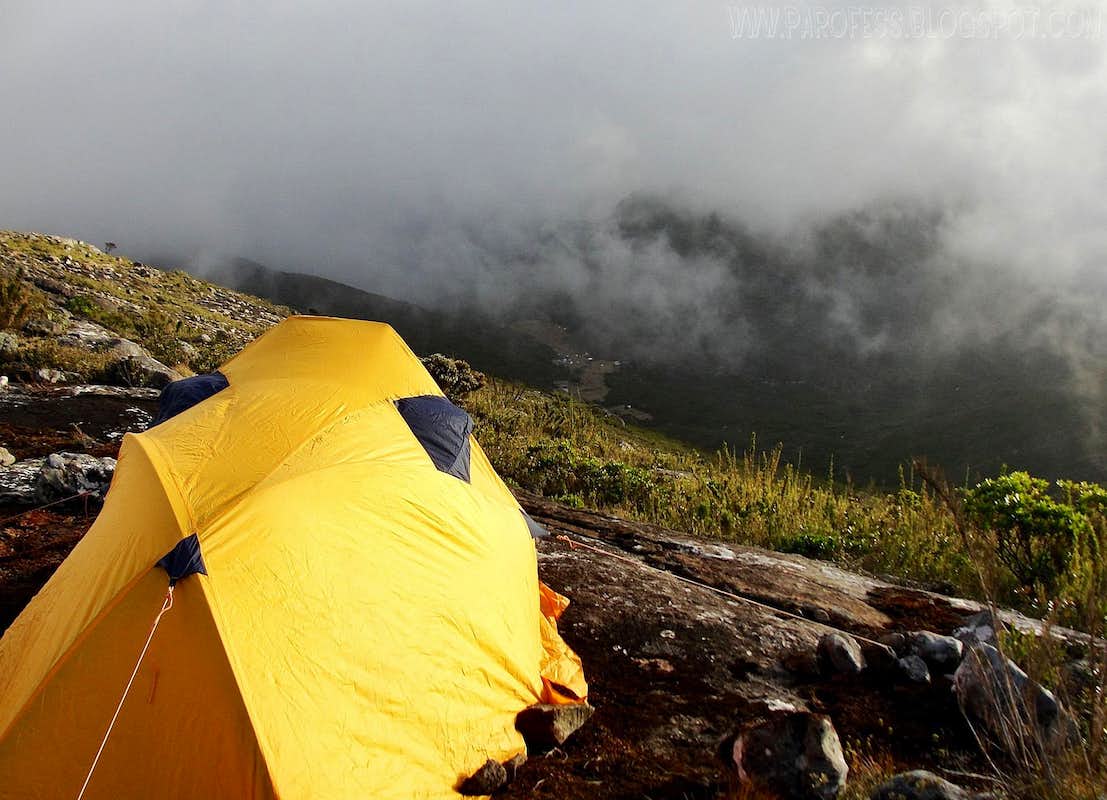 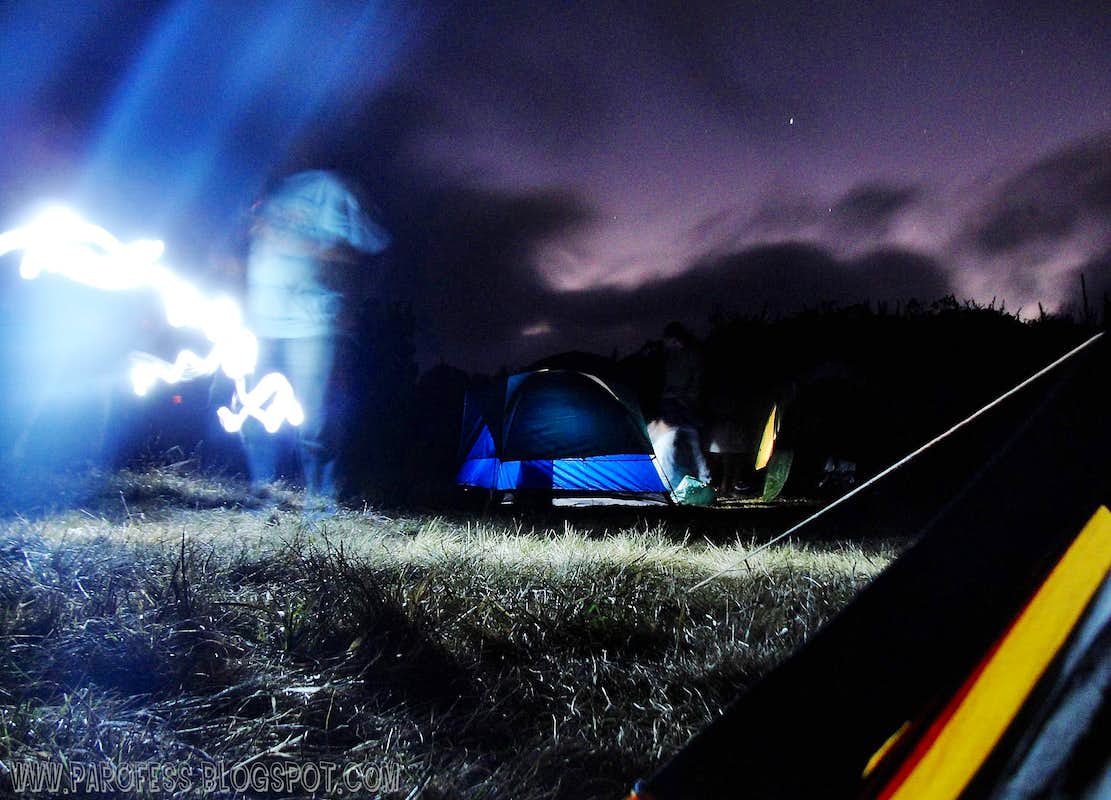 Another one of Terreirão campsite, at night. 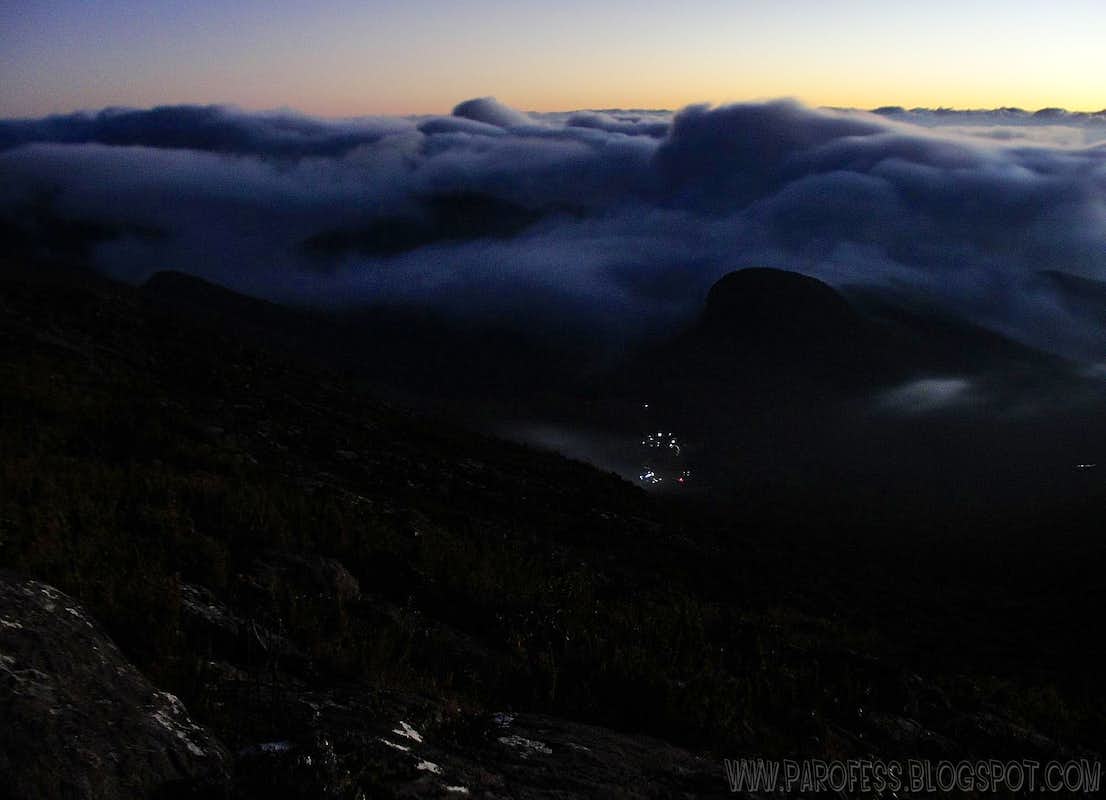 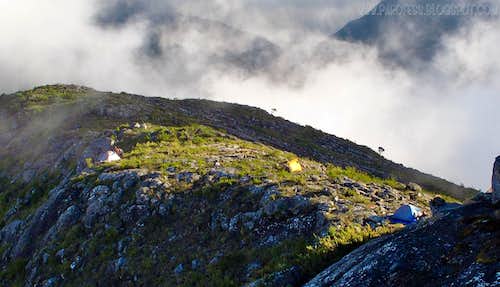 High camp on Cruz do Negro Peak (seen from its summit)

Birdlife at the Park (very rich) 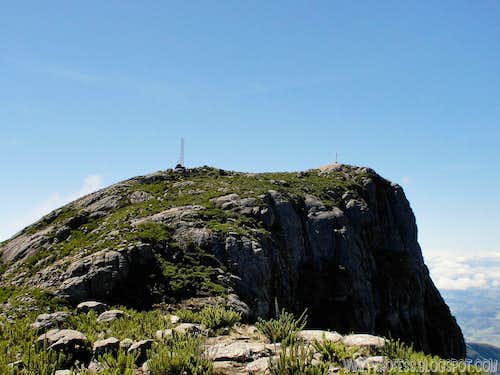 Very close now.
Pico da Bandeira is the highest mountain in southwest region in Brazil, and the highest peak of the park.
Bandeira Peak also stands as the 3rd highest brazilian peak.

To access the mountain page here at SP: BANDEIRA PEAK 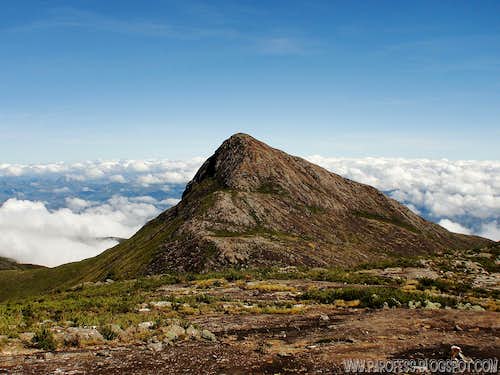 Cristal Peak
Cristal peak stands as the second highest peak of the park, and Brazil number 6.
To access the mountain page here at SP: PICO DO CRISTAL 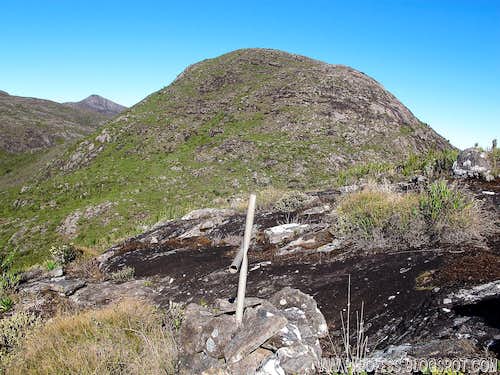 That cross which names the mountain.
Morro da Cruz do Negro is the 3rd highest of the park, and Brazil number 12.
To access the mountain page here at SP: MORRO DA CRUZ DO NEGRO 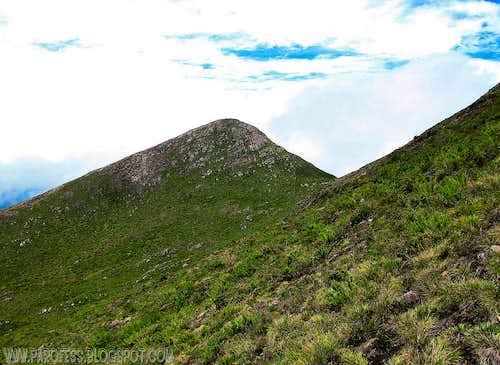 Pedra Rocha
Pedra Roxa is a secondary summit of Bandeira Peak, and stands as the Park 4th highest, and Brazil number 13.
To access the mountain page here at SP: PEDRA ROXA 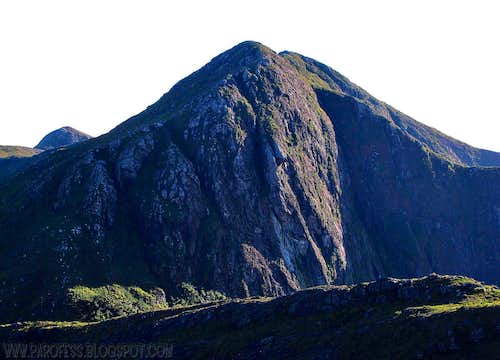 16th highest Brazilian peak.
Pico do Tesouro takes the 5th position inside the park, stands as the most distant and because of that the most difficult mountain of the park, and Brazil number 16.
To access the mountain page here at SP: PICO DO TESOURO 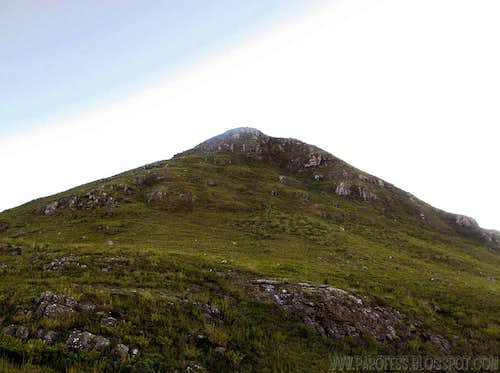 Tesourinho close.
Pico do Tesourinho takes the 6th position inside the park, as the "smallest" of all MAIN peaks of the park, and Brazil number 21.
To access the mountain page here at SP: PICO DO TESOURINHO 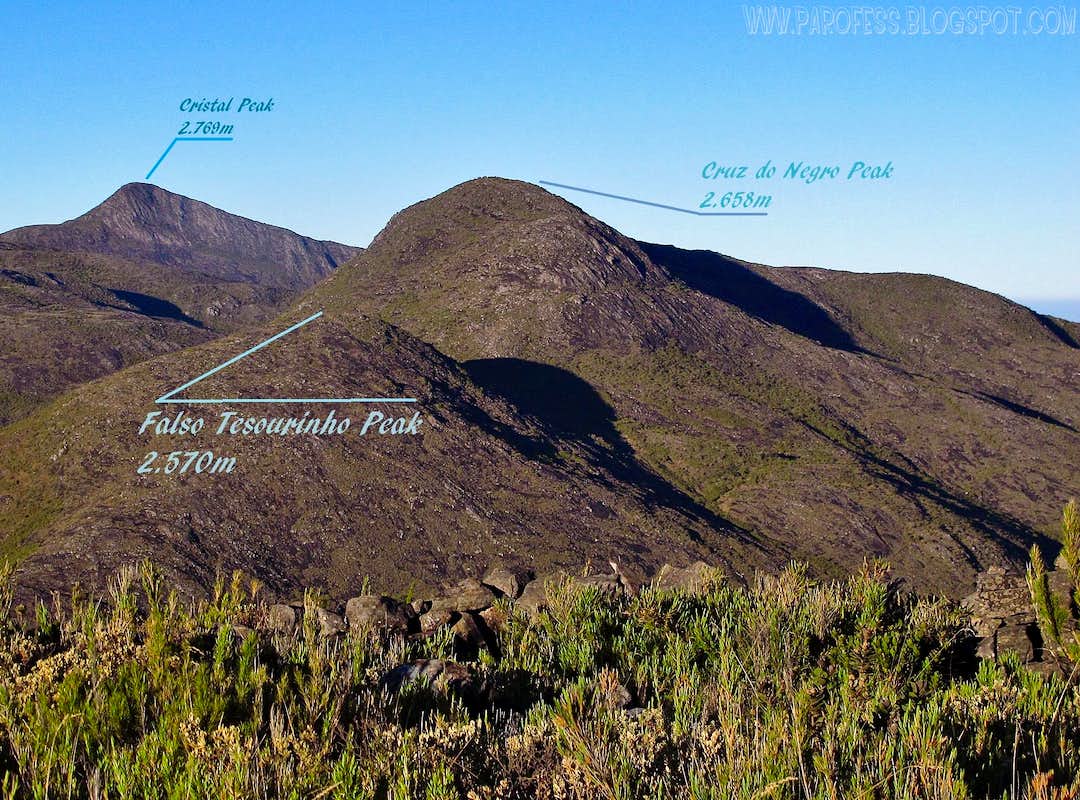 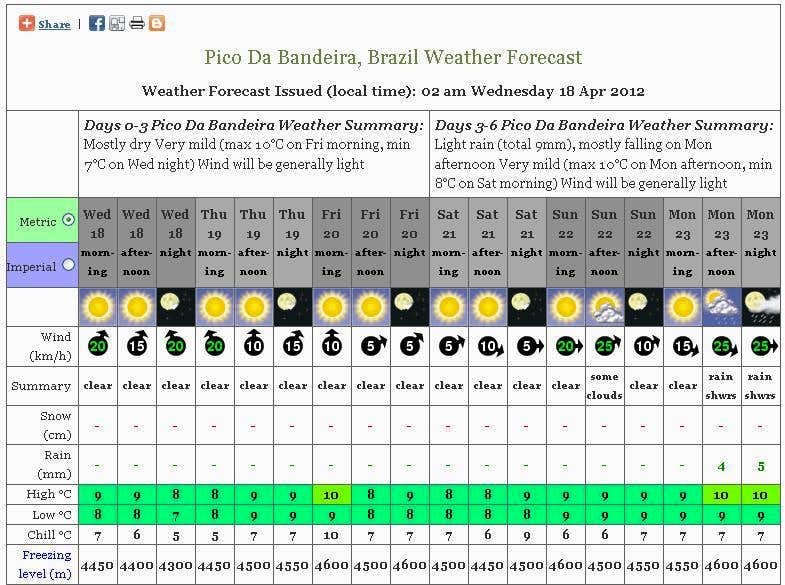