Chickies Rock is merely a hill if you look at it by the map. Yes, it looks a little steep, but nothing like what you see when you stand at the base and look up the 220 foot vertical wall. Impressive........yes, definitely, especially for Pennsylvania. Chickies Rock is without a doubt the premier natural rock climbing location in the state. You can go there any day of the year and there will be at any one time at least 5-10 climbers heading up the steep precipice.

Located on the east bank of the Susquehanna River, this climbing mecca is only a half an hour from PA's capitol of Harrisburg and marks about half-way between York and Lancaster on PA's historic Route 30 (Lincoln Highway). Chickies Rock though is more than just a climbing heaven. It has history, history, and even more history. It is now part of the Chickies Rock County Park which contains more than 422 acres of preservation land. Much of this land along the river was part of the old Pennsylvania Canal. Prior to that it was one of the largest Indian villages discovered in Lancaster County. Even more than that, it ran lines for the PA Railroad and still is active in shipping by rail. 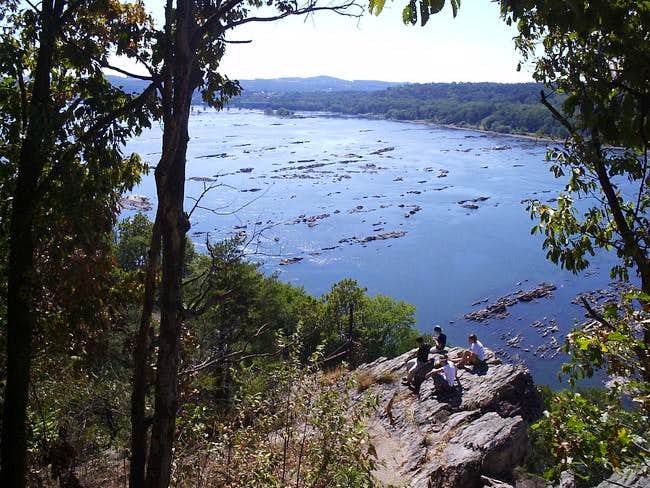 Geologically speaking Chickies Rock is something special to many people on the east coast. It is the largest exposed Anticline on the east coast. This geological feature is very easy to pick out as the rock arches up on the north and south sides of the outcropping. The center of the anticline is located right around the northwest corner of the outcropping and it forms a mini-cave. From here a giant crack spreads all the way to the top.

From the top of Chickies Rock, views extend in all directions except east. Looking north you can see on the distant horizon, the large billows of smoke coming out of Three Mile Island Nuclear Plant just below Harrisburg with the river snaking its way south towards you. To the east are the beautiful rolling hills north of Wrightsville which is seen to the southwest. Just beyond Wrightsville you can see Mt. Pisgah and its bare open summit which is known for star gazing, kite flying, and gliding. To the south the Susquehanna continues on towards the Mason-Dixon Line and its ultimate destination of the Chesapeake Bay as it rolls through the hill country of southern Lancaster County.

All of these routes have many different variations, some as many as twenty. For a more in depth look go to rockclimbing.com and check out all their great stuff. 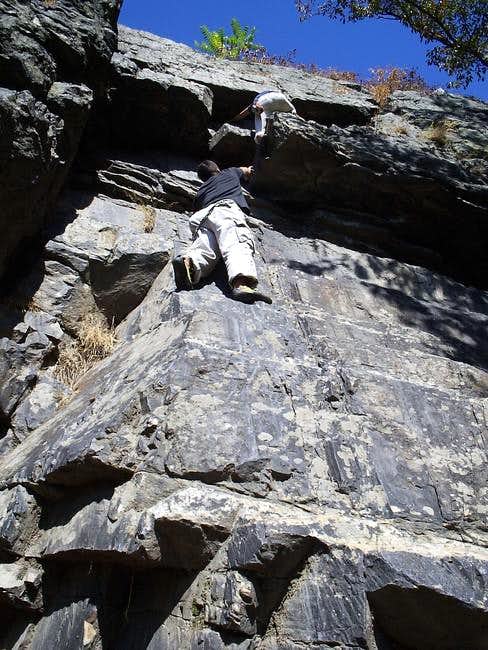 From Lancaster:
From Lancaster take PA Route 30 west towards York. After approximately eight miles, you'll want to get off on the second exit for for Columbia and Marietta. This is PA Rt. 441. Turn right after getting off the ramp and head north on Rt. 441. Continue up Chickies Hill and the Breezyview Overlook will be on your left just before reaching the top of the hill. Just past the top will be the Chickies Rock turnoff on the left.

From York:
From York take PA Route 30 west through Wrightsville and across the Susquehanna River. You will want to take the first exit for Columbia and Marietta once across the river. It is PA Rt. 441 and you'll want to head north. Continue up Chickies Hill and the Breezyview Overlook will be on your left just before reaching the top of the hill. Just past the top will be the Chickies Rock turnoff on the left.

From Harrisburg:
From Harrisburg head south on Interstate 83 for approximately 15 miles to the exit for PA Rt. 30 east. Head east through Wrightsville and across the Susquehanna River. You will want to take the first exit for Columbia and Marietta once across the river. It is PA Rt. 441 and you'll want to head north. Continue up Chickies Hill and the Breezyview Overlook will be on your left just before reaching the top of the hill. Just past the top will be the Chickies Rock turnoff on the left.

There are no permits or park passes required to use the Chickies Rock County Park. There are parking lots both at Breezyview Overlook and at the Chickies Rock access area. Both are free. For conservation purposes just follow the “LEAVE NO TRACE” system and you'll be fine.

Chickies Rock is climbable during all times of the year although it would be hardest in winter with the ice. Make sure you have all the proper equipment for a technical climb in ice on a wall. One of the more beautiful times to visit this summit is during the fall of the year around mid-October. The changing leaves and the gorgeous views of the Susquehanna River make this a wonderful place for a fall hike. Also, the many wooded trails create a perfect setting for fall foliage.

Summer and spring are also wonderful times as well. Views are always here because it is difficult for trees and shrubs to grow to the steep ledges and rock faces on Chickies Rock.

There is no camping allowed in the Chickies Rock County Park.

For current and up-to-date weather conditions click on the link below!
www.weather.com