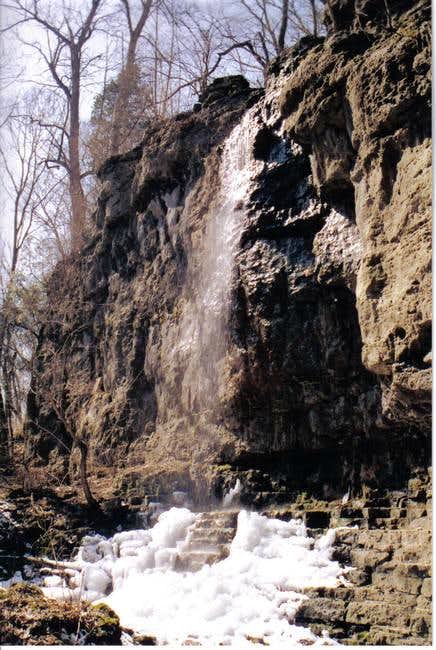 Near the historic towns of Yellow Springs and Clifton is the gorge of the Little Miami River.
The Little Miami has carved a two mile gorge in the hard dolomite limestone. Bounded by Clifton on the east(upstream) and the John Bryan park entrance on the west(downstream), the river is at its narrowest just below Clifton. This is the location where the frontiersman, Cornelius Darnell, a compatriot of Daniel Boone and Simon Kenton is said to have leaped the Little Miami while escaping the Indians who in fact captured Boone. The leap is around 18 feet and occasionally has been attempted by those who shouldn’t. The gorge was designated a national natural landmark in 1968. Its microclimate allows certain indigenous plants and some Canadian plants to survive in this Midwestern area. The easiest odd plants to recognize are the Canadian Hemlock and Northern White Cedar. The cliffs are from 20 to 60 feet high and are sustained along your hike. At the John Bryan entrance, the gorge is somewhat wider and narrows as you hike eastward. The bottom of the gorge contains large black walnut, ash, sugar maple, sycamore (Platinus sp), red oak, black oak, white oak, chinquapin oak, beech, hickory, hop-hornbeam and black cherry trees as well as the aforementioned hemlock and white cedar. As you hike along, it is amazing that you see only the river and the forest- no houses. This is quite amazing for such a densely populated area as is greater Dayton. There was climbing here until the mid 1980s when the State of Ohio decided that the upper gorge was to be off limits to climbers, this unfortunate big government decision brought climbers together and we were able to get the state to agree to about four top roping stations nearer to the John Bryan park entrance. From the 1960s through the 1980’s many good climbers came through Clifton Gorge. Prominent among these were John Markwell of the Gendarme at Seneca and Jim and Jason Karn who participated in many competitions. I remember Mike Johnson as being the resident local.


How to Get there.

Located between Yellow Springs and Clifton, the easiest access is off State Route 343 within sight of Clifton. One parks in the Bear's Den Parking lot maintained by the Ohio Department of Natural Resources on the south side of Ohio State Route 343.
U.S. Route 68, a north-south highway between Xenia and Springfield Ohio will take you past Yellow Springs and is within a mile of the gorge at its closest. Approach from Dayton: Leave I-675 at exit 23 and travel east on Fairfield-Yellow Springs Road 6-7 miles. Travel east on Ohio SR 343 east 2.5 miles to the Bear's Den. Approach from Cincinnati: Travel north on I-75 till the I-675 interchange then travel north 23 miles to
exit 23 and finish as in the Dayton approach. Approach from Columbus: Travel west on I-70 till reaching the US Route 68 exit in Springfield. Turn south on US 68 with Springfield in the rear-view mirror. Travel about 12 miles to Yellow Springs and finish as before by traveling 2.5 miles east on Ohio 343 parking at the Bear’s Den lot.

One must stay on the designated trails because this is a National Natural Landmark. Of course collecting plants is not allowed. Pets are not admitted on the paths. You can climb and rappel a several designated areas that you approach from the upper path on the north side of the river.Rock Climbing and Rappelling
A rock climbing and rappelling area has been established within the park. Please stop at the park office to register for an available site. Organized groups may reserve the rappelling site by calling the park office at (937) 767-1274.

Clifton Gorge may be climbed at any time of year. Remember that the dolomite does not give the best friction.

Camping is possible at John Bryan State Park at the west end of the park. This is the area nearer the designated climbing areas which one approaches by taking the upper trail on the north side of the river. Campers may reserve camping sites by calling the park office at (937) 767-1274. John Bryan Park website:
John Bryan