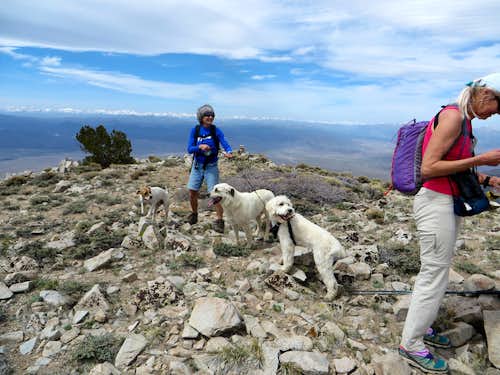 Dogs on the summit of Corey Peak

Corey Peak 10,520’ is the 2nd highest named summit in the Wassuk Range of Western Nevada. Situated 10 miles west-southwest of Hawthorne, it is easily accessible by Nevada standards. Although a 4WD motor vehicle can reach within a few hundred feet of the summit, 2WD passenger cars can get within 4 miles of the summit via the Lucky Boy Pass Road, making for a nice day hike.

Given that the route to the summit is via the southeast slope, hiking season generally begins in mid-April and lasts through November.  It is probably better to hike in April-May-June, September-October-November.  Late June through Labor Day are usually high temperature, making Corey Peak a less attractive outing.

Corey Peak is often overshadowed by its larger neighbor to the north, Mount Grant 11,239’. However, access to Mount Grant is through a military base and although it was announced in April 2015 that it would be open to the public, details are still unclear, and the long access road to Mount Grant makes it a more complicated outing. Therefore, Corey Peak is probably the best option for a good day hike in the range if wanting to hike whenever and using a 2WD vehicle.

When hiking Corey Peak, there is an option to hike nearby East Corey Peak 10,300'. With about 575 feet of prominence, and only about 2 3/4 miles of additional round trip hiking, it is worthwhile to visit. 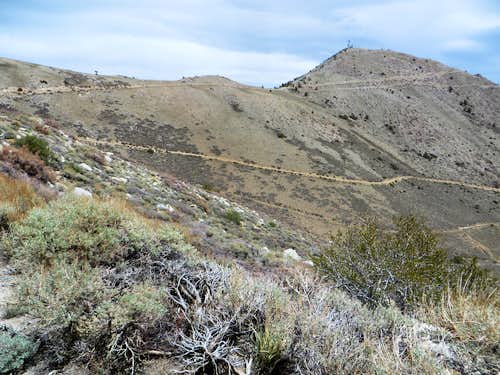 East Corey Peak seen from the descent from Corey Peak

Hawthorne is a small, but important town located just southwest of the large Walker Lake. US 95 heads along the west shore of the lake and into Hawthorne before heading southeast to Tonopah and Las Vegas.

Once in the town of Hawthorne, turn south on highway 359 and continue through town. About 3 miles south of town, take a right and head west on Lucky Boy Pass Road. The road is well-graded dirt, easily accessible by any 2WD automobile. Follow it for about 7 miles. A rock formation comes into view, and there are two roads. One road heads south towards a mine, and the other road heads north towards Corey Peak. The elevation at the base of the road is about 7,500’.  Take a right and an immediate left at a parking area that makes up the unmarked trailhead. 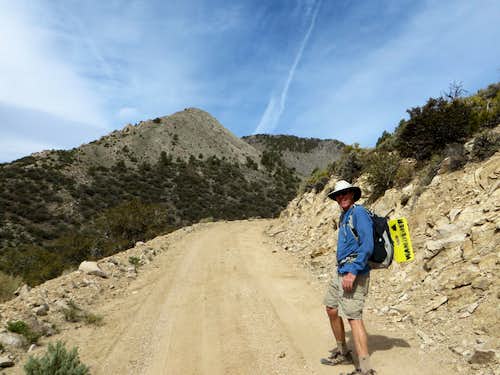 Approaching Corey Peak from the road

From the parking area, take the road for about 2 1/2 miles up to 9,760’ to a crossroads. It is steep the whole way. Take the road as it heads to the left back towards the east face of Corey Peak.  The road doesn't gain much elevation, but eventually leads to switchbacks that lead up to the summit. The total distance one way to the summit is 4 miles with an elevation gain of approximately 3,100’. This can be shortened given the summit itself is only about ¾ miles from the turn off at 9,760’. But it is much steeper to do so.  Cutting the switchbacks is not recommended. 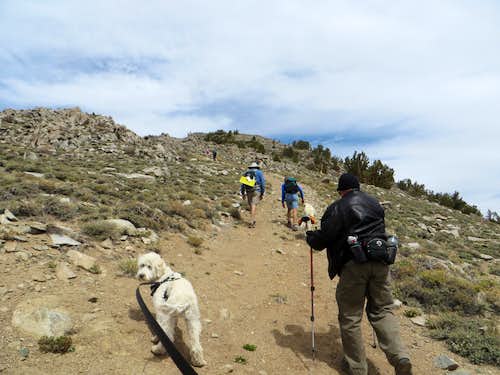 Final stretch to the summit of Corey Peak

To reach East Corey Peak head back to the road at 9,760’ and then head east towards the electric towers atop East Corey Peak. The road gets to the base of the summit in a little over 1/2 mile.  It is recommended you stay on the road and continue for another 3/4 miles or so to the summit. 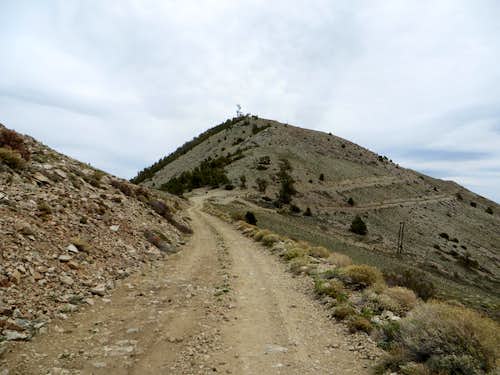 All told, the round trip hiking distance and elevation gain for both peaks is approximately 10.6 miles and 3,680’.

There is no red tape to hike either summit. The mountain is on public lands with no restrictions.  There are side roads that are off limits, but this isn't an issue if staying on the main road.  The Lucky Boy Pass Road may be closed during winter months if there is lots of snow.  A sign at the beginning of the road mentions the road is closed December through April, but it would be expected that the road would open by early April at the latest, if it is closed at all during March.