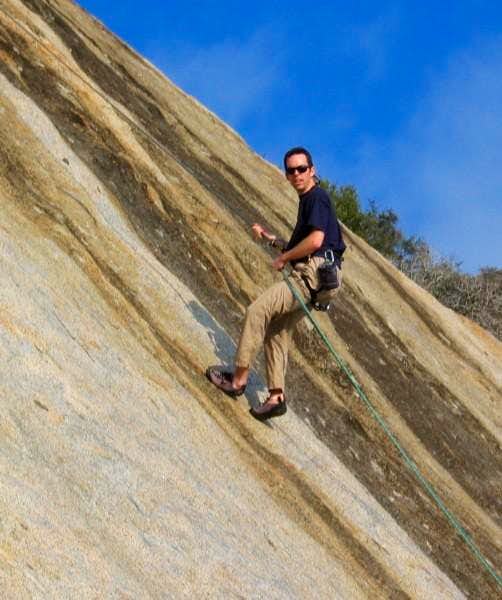 As far as I know, this is a Saturday slab. Sunday slab is located exactly below the parking area.

You may well be right Misha. I was going by Dave D's description: "Tollhouse is also host to a good chunk of beginner lead routes located at the Sunday Slab area (single pitch, well-bolted 5.7's)." Not having a copy of the guide book, I can't tell for sure which slab this is...but the one we were climbing sure matches the description.

I think that Sunday slab also has a bunch of 5.7 bolted routes :)

I guess we need Dave D. to clarify this for us...

The old school locals of Tollhouse (ie Cam Donahue, Dwight Kroll, Barry Chambers) have called both slabs "The Sunday Slabs Area". The SEKI guide mentions a non-descrip verse regarding the Sunday Slab Area on pg. 14. I haven't heard of anyone referring to the left slab (ie Shattered Dreams, Taking A Bath With Strangers etc) as the "Saturday Slab". The right slab features Directisima......the very first bolted route at Tollhouse (1972). Does that help clear things up?

I got the Saturday slab name from Randy Wenzel who is one of the locals/climbed in the area for many years. He was climbing/camping with us this weekend.

He is a great guy and a fantastic climber. BTW, he lives in Visalia. Perhaps, you two should hook up (he has heard about you before)

That particular route was run-out (I didn't lead it though). 25-30 ft. before the first bolt is encountered.

You are on the "Hippo in a bathtub" route... It is probably the crappiest one (from the pro perspective) on that slab

Actually, that route and others like it, were the norm for Tollhouse until Mark Spencer came along and grid bolted the whole slab with BS bolts! Anyway, I believe runout conditions aid in the abiltiy to push beyond the mental barriers of ones mind. Several years back (after Spencer had "stainless steeled" the area), a few of us were gonna go out there and chop them. I was later convinced to leave it as is so that fledgling leaders could build up their lead experience. We ended up adding 'Taking A Bath With Strangers' as grudge f*ck statement!