The Davis Mountains are purportedly named after U.S. Secretary of War Jefferson Davis, who was later more-famously recognized as the President of the C.S.A. Incidentally, he had the surrounding land known as Jeff Davis County and the corresponding county seat of Fort Davis named for him as well.

The mountain range encompasses a large area from just south of IH-10 at it's northern boundary (the northernmost ranked summit, Point 6580', lies only ~10 miles from the highway) to TX-166 in the south. It extends northeast to just shy of the Reeves County line where the Barrilla Mountains commence and southeast of Fort Davis to where the Twin Mountains of the Puertacitas Range stand guard. The west flank of the range simply falls away to a large drainage, on the other side of which rises the Van Horn Mountains and the Sierra Vieja.

The Davis Mountains are larger than both the Texas Guadalupes and the High Chisos ranges, however, there are two different types of peaks in the chain that borrow from the characters of these two other massifs. It would be overly simplistic to classify them as higher and lower, but there is some truth to this method.

The smaller category are the desert peaks which have very little vegetation on their slopes and few large animals beyond an occasional grazing cow-ntaineer. These tend to be lower in elevation, however, some of the 7,000'+ peaks that stand as lonely sentinels fall into this group as well.

The mountains standing in lofty groups hold unexpected flora and fauna that are remnant of a time when Texas was much cooler and wetter than it is today. Black bear, mountain lions, mule deer, ponderosa pine and even aspen are some of the more startling residents of the high-country. The central part of the Davis Mountains falls into this category; sheer cliffs, wide expanses of evergreens and countless wildflowers flowing through the meadows all seem out of place but quite welcome.

The geology of the area is largely igneous, though the volcanoes that once spewed magma on the land that would become Texas lie further south and west. The Davis Mountains were created about 65 Million Years Ago as uplifted igneous intrusions with a smaller portion of extrusive rock interspersed. Based on geologic similarity, in several millions of years, this range will appear quite similar to Oklahoma's Wichita Mountains as they exist today.

On this page, you'll find a list of all the summits in the range above 2,000 m (6,561 ft) and links to any pages that have been created here on SP. If you have enough information to submit one of these peaks, please do!! Not only will you find information about the summits within the Davis Mountains, but you can also get beta on all the other activities available within the immediate vicinity. This gorgeous corner of the Lone Star State is not a crowd-frequented destination by any stretch of the imagination. I'm actually posting this page with a bit of hesitation, because I really don't want to see that change! ;-)

Getting to the Davis Mountains always entails a drive. El Paso, ELP, (195 mi away) hosts the closest international airport, though Midland / Odessa, MAF, (162 mi away) has a regional air-field serviced by most major carriers.

There are a variety of ways to reach the area depending largely on the scenery you'd like to see as well as your ultimate destination:

This is West Texas after all...

The bulk of the Davis Mountains are on private ranch-land, and as a result, most of the peaks are off-limits to the hiking public without specific owner permission. Thankfully, though, The Nature Conservancy owns a 32,000 acre tract of land (with conservation easements on 65,830 acres of adjoining property) encompassing the highest summits in this range. A fews days and weekends each year, they offer public access to the Davis Mountains Preserve for absolutely no charge.

Additionally, the few landowners with whom I've made contact have been very friendly and open to having hikers visit their properties. As long as you treat both them and their land with respect, many of the peaks in the Davis Mountains can be climbed.

Although some people are frustrated at the lack of free-and-open access, I offer the alternative. Visits to this portion of the Davis Mountains are characterized by few crowds and comparatively little evidence of human presence. This peaceful isolation is in stark contrast to most places in our world today. Have you ever been to the Grand Canyon and struggled to get away from the din of other visitors even in the backcountry? If this rings true and unspoiled nature is what you're craving, then make plans to visit the Davis Mountains during one of the open days or weekends. If not, why are you going to the mountains in the first place? ;-) 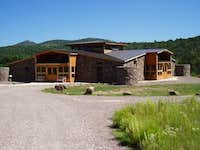 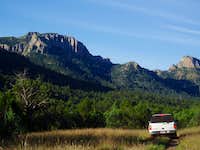 About The Preserve: The wild and remote Davis Mountains is considered one of the most scenic areas of Texas. Indeed it is one of the most biologically diverse. Rising above the Chihuahuan desert, the range forms a unique “sky island” surrounded by the lowland desert. Animals and plants living above 5,000 feet are isolated from other similar mountain ranges by vast distances. These are true ecological islands, preserving living remnants that occur otherwise nowhere else in Texas.

Republic of Texas??: In the late 90's this area became known to the world for all the wrong reasons. One local resident decided that Texas had been illegally annexed to the United States and proceeded to announce that he represented the true government of Texas and declared his trailer to be the "embassy" of the Republic of Texas. After leaving a trail of bogus liens and other disruptions this group took hostages bringing the wrath of the Federal Government down on their heads. Today the ring leader of the group is in jail, the "embassy" has been burned down and the property where it stood now belongs to the Nature Conservancy. - Added for general curiosity and historical (?!?!?) significance.

What to See - Plants: Plant life is diverse and presents interesting contrasts. On the wetter, shaded slopes is a montane forest, including ponderosa pine and small but thick stands of quaking aspens sheltered under a cliff beneath Mount Livermore. South-facing slopes are dominated by pinyon pine, gray oak, alligator juniper and mountain mahogany. Madrone trees dot the valleys and deep canyon streambeds. Eleven rare species of plant are known, including the Livermore sandwort, many-flowered unicorn plant and fringed paintbrush.

What to See - Animals: Mountain dwelling wild animals include the black bear and mountain lion. The group of birds in the higher elevations, including the Common Black-hawk, Golden Eagle, Dusky-capped Flycatcher, and Montezuma Quail, is more closely associated with western mountain ranges than birds across the rest of Texas. Some species nest here and nowhere else in Texas.

This system is also of importance for bird migration. Various birds of prey, ten species of hummingbirds and some of the other gems of America, including the painted redstart and Grace’s warbler, migrate through the Davis Mountains. In just a relatively short time we have found on the property Mexican Spotted Owls and Slate-throated Redstarts, two very rare birds for Texas.

Fees: The Davis Mountains Preserve is open free of charge for hiking and camping in accordance with their Open Access days and weekends. Check TNC's website for the latest planned open activities. (Current as of 08 Jun 2009)

History: Davis Mountains State Park, 2708.9 acres in size, is located in Jeff Davis County, four miles northwest of Fort Davis, approximately halfway between Guadalupe Mountains National Park, Carlsbad Caverns, and Big Bend National Park. The original portion of the park was deeded to Texas Parks and Wildlife Department by a local family. Original improvements were accomplished by the Civilian Conservation Corps (CCC) in 1933; the park has been open to the public in since the late 1930s; formal campground facilities were added in 1967. - Text from the TPWD page for Davis Mountains State Park

Indian Lodge: This unique inn, built in the 1930s by the Civilian Conservation Corps (CCC), is located within Davis Mountains State Park. Lodging features a full-service restaurant, complimentary morning coffee service and modern rooms including heating, A/C, cable TV, telephone and maid service. Meeting facilities are available as well. Pets are not allowed at Indian Lodge, so if Fido is with you, look for other accommodations. 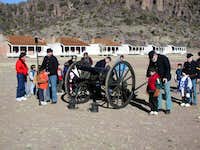 History: Fort Davis is one of the best surviving examples of an Indian Wars' frontier military post in the Southwest. From 1854 to 1891, Fort Davis was strategically located to protect emigrants, mail coaches, and freight wagons on the Trans-Pecos portion of the San Antonio-El Paso Road and on the Chihuahua Trail.

Activities: Hiking, self-guided tours and living history programs (including artillery demonstrations) are available to all visitors. For children, age 8 - 14, the "Mystery of the Talking Walls" challenge is available. Under adult supervision, children follow a map and gather clues; they then have to DECODE a secret message. For those younger than 8, there are Junior Ranger Programs as well.

Fees: Park Entrance fee is $3.00 per person for visitors 16 years and older (7-day pass). Children 15 and under are free. See the NPS website for details about group entrance fees. (Current as of 13 Sep 2007)

History:Located atop Mt. Locke and Mt. Fowlkes, The University of Texas at Austin maintains the state-of-the-art McDonald Observatory. Work accomplished on the 4 telescopes and other astronomical observation equipment has led to some of the most exciting developments in our quest for knowledge about space.

Activities: The Frank N. Bash Visitors Center at McDonald Observatory provides interactive displays and programs for visitors to learn more about what goes on in the dark, clear skies of West Texas. Visit McDonaldObservatory.org for more information on visitor programs.

Fees: Costs vary by program, but admission to the Visitors Center and self-tours of the Hobby-Eberly Telescope are free of charge. Please visit the McDonald Observatory website for information on program reservations and fees. (Current as of 13 Sep 2007)

Information excepted from the McDonald Observatory website linked above.

Up until quite recently, this part of West Texas changed little over the previous hundred years. Although now some developers and speculators threaten to turn this beautiful desert oasis into a resort town, you can still see the true wild west on display! Many of the ranches which have been family owned and operated for over a century are open to the public for leisure retreats in the Fort Davis area. Some fantastic places to stay in the Davis Mountains are as follows:

CONTRIBUTIONS NEEDED! If you have any photos of the peaks in the Davis Mountains, please post them to this site. Also, regarding access, I've listed "Restricted" in green, "Private" in yellow and "Closed" in red. Since I haven't contacted any land owners that have denied access, currently no peaks are listed as Closed. If you have any access updates, please leave a comment and I will update the page accordingly.

Finally, a note on the ranking numbers; the first number is the peak's rank within the Davis Mountains, whereas the number in parentheses is the ranking out of the entire State of Texas. For inclusion as a "ranked" summit, I've followed the "Colorado Rule" requiring 300' of prominence.