“The period of early logging in the hills of the Jordan river valley was marred by several fatal accidents. The last known and best recalled tragedy took the life of 21 year old Stanley Graczyk (Big Sam), a fun-loving lumberjack. Soon to be married he became legend on May 20, 1910 when he was killed while driving a team and big wheels loaded with logs down a steep slope near here. This high point, with its commanding view of the valley, has ever since been known as “Deadman’s Hill.” ~from sign atop Deadman’s Hill Overlook

Deadman's Hill sits in the far northwest corner of the Lower Peninsula of Michigan. For a typically flat Lower Michigan this hill has some of the steepest relief around. Its summit, if you can call it that, stands a diminutive 1329’ above sea level and is barely distinguishable as you approach it from the east. West of the summit, however, the land drops away sharply over 400’ to the valley below and it’s the valley below that makes this summit so special. Deadman's Hill overlooks one of Michigan’s most precious natural treasures, the Jordan River Valley. 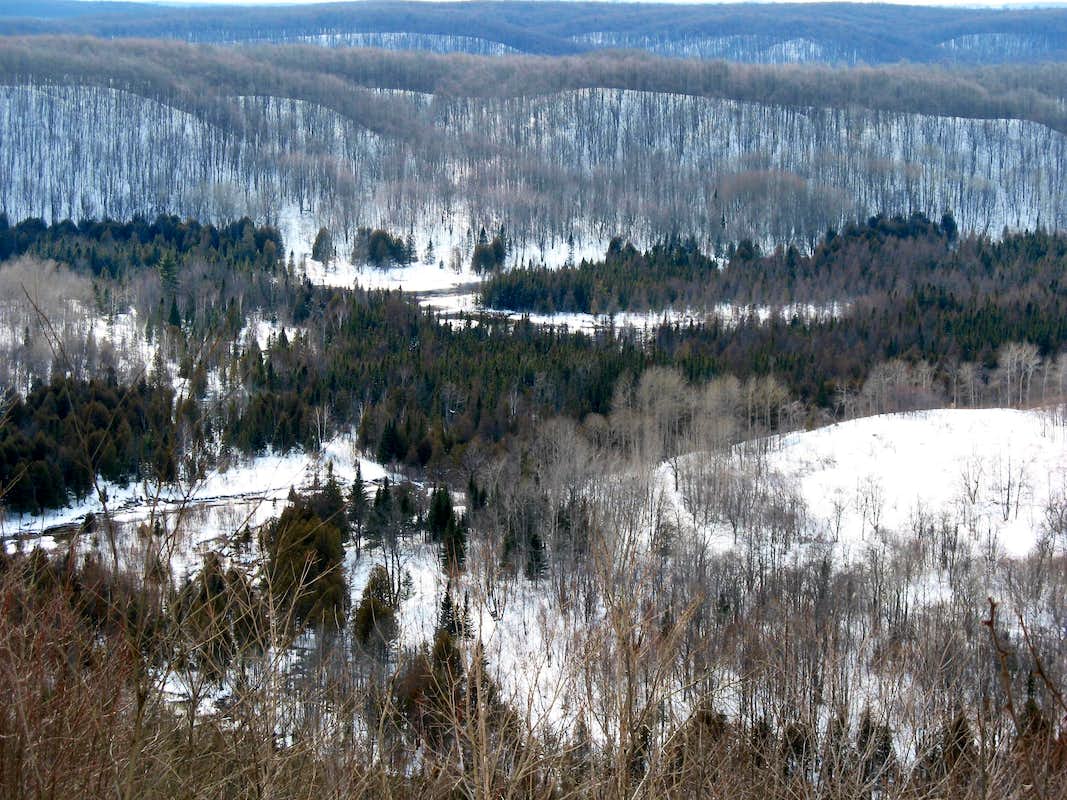 Deadman’s Hill is really more of a ridge than a true “peak.” Northwest Lower Michigan is comprised of two different types of landforms. Nearer Lake Michigan the landscape is one of rolling hills. Known as glacial moraines, these low hills were created as piles of sediment were left behind by the retreating ice. Then, abruptly, about 20-30 miles inland the terrain rises to a high, hilly central plateau ranging in elevation from 1200 – 1700 feet. Deadman’s Hill lies along the edge of this central plateau. This is why it is so dramatic as you approach from the west but barely noticeable from the east.

The closest access to the hill is off US-131 about 9 miles south of Boyne Falls or 13 miles north of Mancelona. If you are arriving via I-75 take Exit 282 into Gaylord. Turn west on M-32 and follow it 12 miles to US-131. The access road to Deadman’s Hill is about a mile south, watch for the signs. BE AWARE that during the winter months the access road is only plowed up to a point about a mile from the trailhead so be prepared to walk an extra couple miles!

You can access the Jordan River Pathway from a number of other points. In the summer the trail can be picked up at various spots down in the valley along the dirt Jordan River Road. This road can be rather rough, however, especially after the spring snowmelt so I would suggest using a vehicle with decent clearance. Get a good local map for finding and traveling this road; it’s just too confusing to describe here. 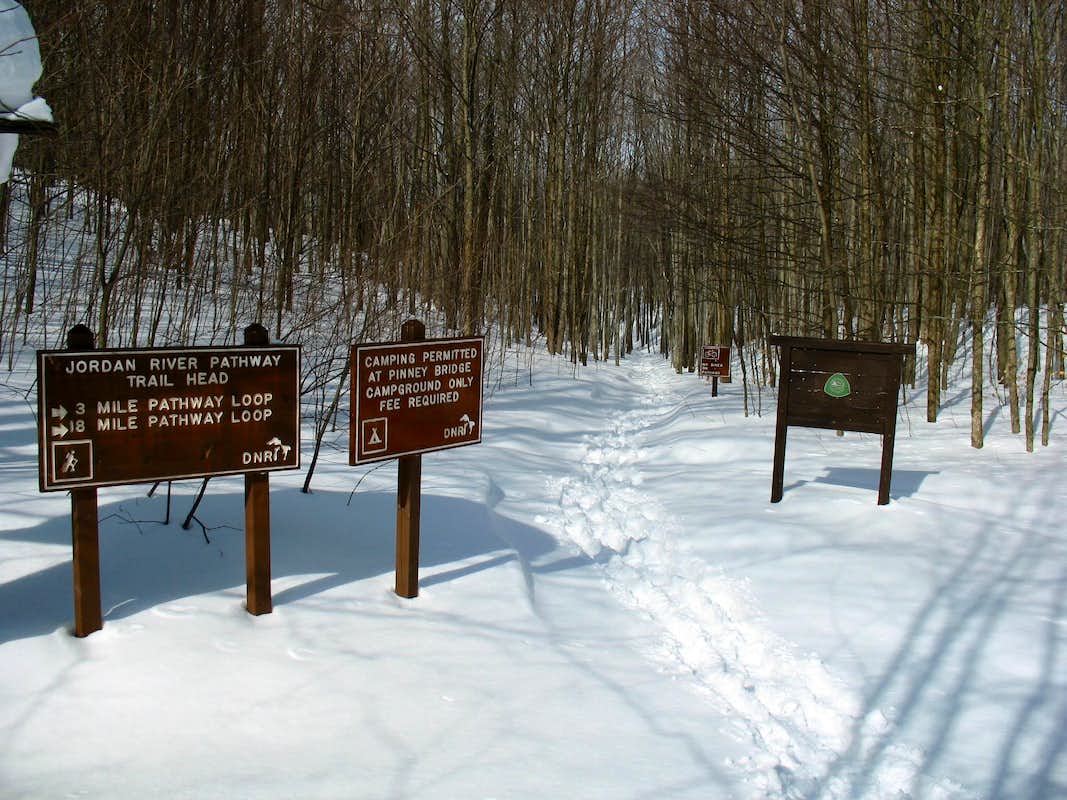 Starting from the Deadman’s Hill parking area a large sign will inform you that you have two choices at this point: You can either enjoy a shorter 3-mile loop down and around the hill or partake in an 18-mile overnighter which tours the entire Jordan River Valley. Some hardcore hikers may be able to travel the whole 18 miles in a day but the terrain here is sufficiently rugged and interesting enough that it should really be enjoyed over two.

Whatever loop you choose resist the urge to make the quick jaunt up to the overlook. Save it for last, trust me you’ll appreciate it more. The trail immediately heads down off the escarpment. For nearly a mile you’ll hike steadily downward, descending over 400 vertical feet through a beautiful hardwood forest.

When you finally reach the bottom you’ll arrive at a T-intersection with the North Country Trail arriving from the north (right). Turning left, you’ll follow the base of Deadman’s Hill for a short distance with brief glimpses of the Jordan River through the trees to your right. About a quarter-mile later the trail makes a hard right and passes a small observation platform overlooking a wet spring area.

I’ve done a bit of exploring in this area and found no fewer than six springs erupting from the hillside in the immediate area. Past the spring the trail is rather rough. It is careful not to descend to the swampy valley floor, choosing instead to follow the steep, muddy slope just above it. Eventually the trail levels out swinging away from the hillside just before reaching the next junction. If you head off the trail down to the river at this point you’ll be treated to the only good views of Deadman’s Hill from below.

Returning to the trail junction the Jordan River Pathway (NCT) heads straight while the return route breaks left to head up the hill. If you’re opting to do the 18-mile loop you would continue straight here. Day trippers head left. The trail passes through an open field of tall ferns before soon re-entering the forest. The climb here is longer but less steep than what you experienced on the descent. You’ll know you’re about at the top when you pass a large boulder on your left. There is another junction at the top where the Jordan Valley Pathway arrives back from the south. The parking area is just under a mile to your left at this point.

The trail wanders through the woodlands just back from the edge of the ridge. Watch for the left turn at an old truck trail which takes you out to the first overlook. The view from here is beautiful, looking down and across the river valley you just traveled. Following the fence line up to the high overlook of Deadman’s Hill you are treated to views up the valley to the north. In the fall, when the maples have turned the surrounding hills shades of crimson and orange, the views are truly breathtaking. From the overlook it’s only a few more steps down the hill to your car. As you descend to your vehicle watch for a large, grassy field to your left; this is the official “summit” of Deadman’s Hill. 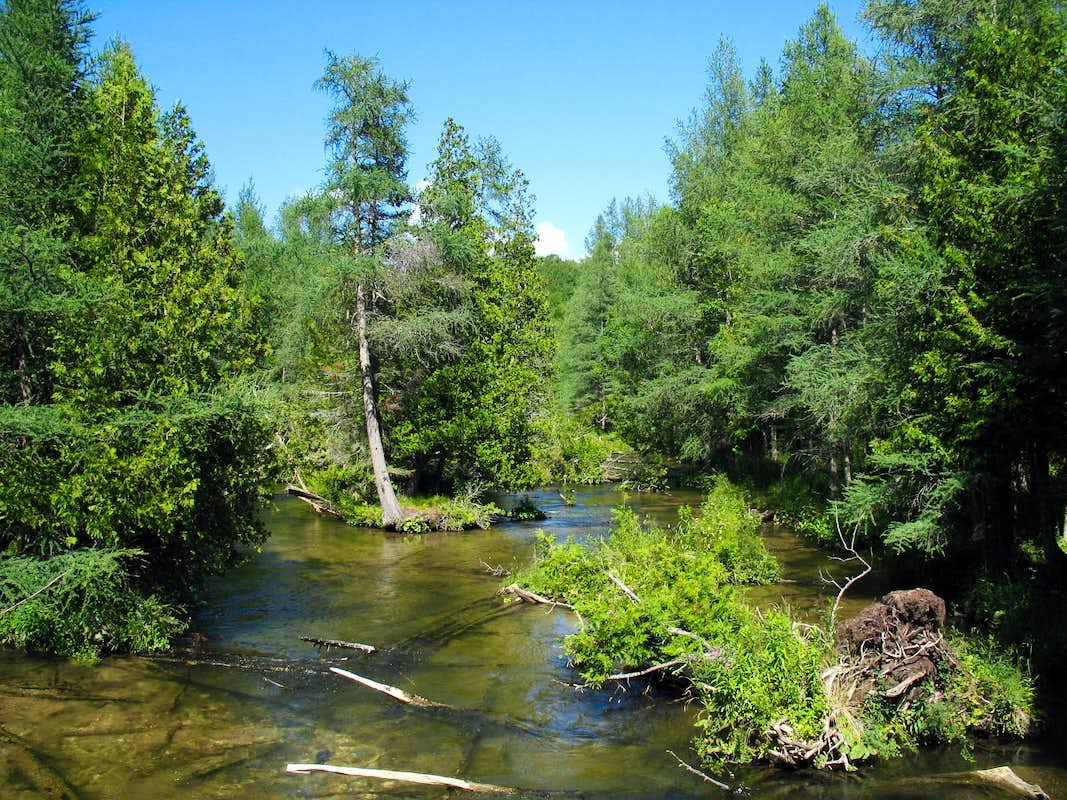 The first mile and a half follows the 3-mile loop down to the valley floor and along the base of Deadman’s Hill. Where the 3-mile loop splits to head back up the ridge you’ll want to keep heading straight along the Jordan River Pathway which is blazed blue as it is part of the North Country Trail. About a quarter mile from the junction you’ll pass an old beaver pond as the trail follows an old logging path. About a mile past the pond the trail crosses to the north side of the Jordan River and the Jordan River Road.

From here to Pinney Bridge Campground the trail stays within about a quarter mile of the river. It’s a rather hilly path; it can’t really decide whether to wind up a hillside or follow the river and so spends its time undulating between the two. Just before reaching the Pinney Bridge Campground the trail climbs a bluff to a beautiful view over the west end of the valley. It’s a great place to rest your weary feet after traveling 9-miles, although at this point you’re within a quarter mile of the campground which is a good place to stop also! 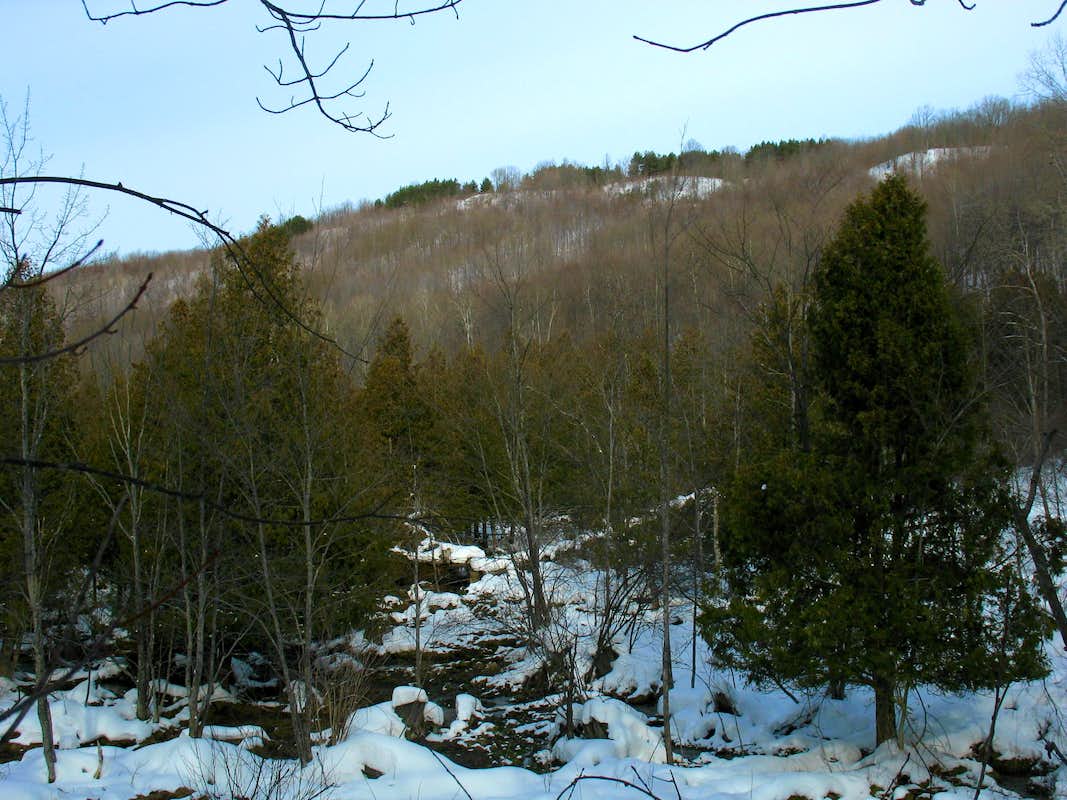 Pinney Bridge Campground is located on the site of an early-20th Century logging camp. Its 15 sites are spread out around the edge of the grass clearing just inside the wood line. There is a pit toilet here as well as a hand pump for water. The campground is located on a high bluff away from the river so getting your water from the pump is a much easier option. As of 2007 there was a fee of $10 to camp payable at a drop box near the entrance.

The Jordan River Pathway descends from the campground via an old logging road about a quarter mile to the river crossing it at Pinney Bridge. The Jordan River Road is again crossed here and there is a small parking area for anglers and hikers. From the road the trail begins its trek up the ridge heading far away from the Jordan River. A little over two miles later the trail crosses Cascade Road and Cascade Creek which, like its name implies, contains a number of pretty cascades.

From Cascade Creek the trail continues to climb and, about a mile or so later, breaks out to Landslide Overlook. This overlook is very reminiscent of Deadman’s Hill but provides its own unique perspective from the far west end of the Jordan River Valley. For the next 3 miles the trail passes over a series of hills and valleys, crossing numerous small streams making their way down to the Jordan. About 5 miles from Landslide Overlook the Jordan River Pathway rejoins the 3-mile loop along the top of the ridge. From here it’s about a mile back to your car via the beautiful summit of Deadman’s Hill (see 3-mile loop description). 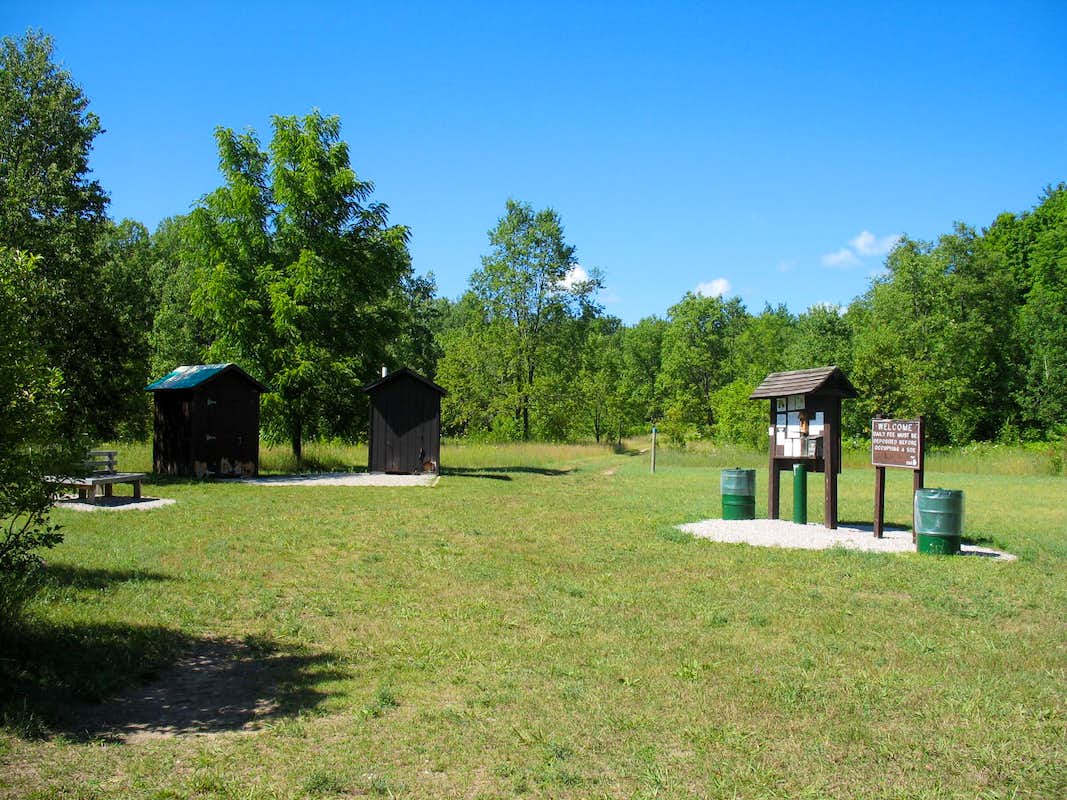 Deadman’s Hill and the Jordan River Valley lie within the Mackinaw State Forest. Technically camping is prohibited within the State Forest except at designated campgrounds. In reality, you could probably set up camp anywhere, as there are likely no undercover DNR searching the woods for renegade campers.

The only established backcountry campground is at Pinney Bridge, located conveniently along the Jordan River Pathway at its midpoint. There is water available here via a hand pump as well as a pit toilet. The fee in 2007 was $15/night. 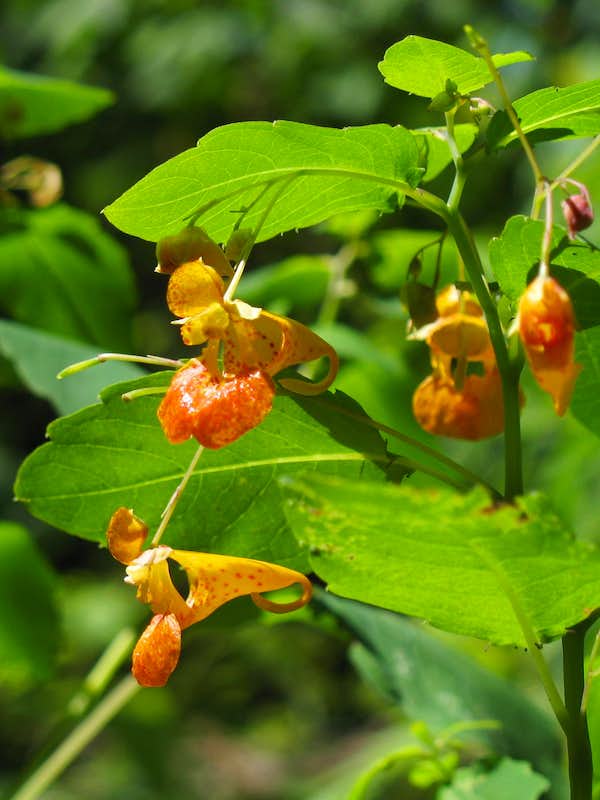 DWhike's Adventures - Shameless self promotion...come visit my website for more pics of Deadman's Hill, the Jordan Valley, and other places that I have wandered off to in recent years...