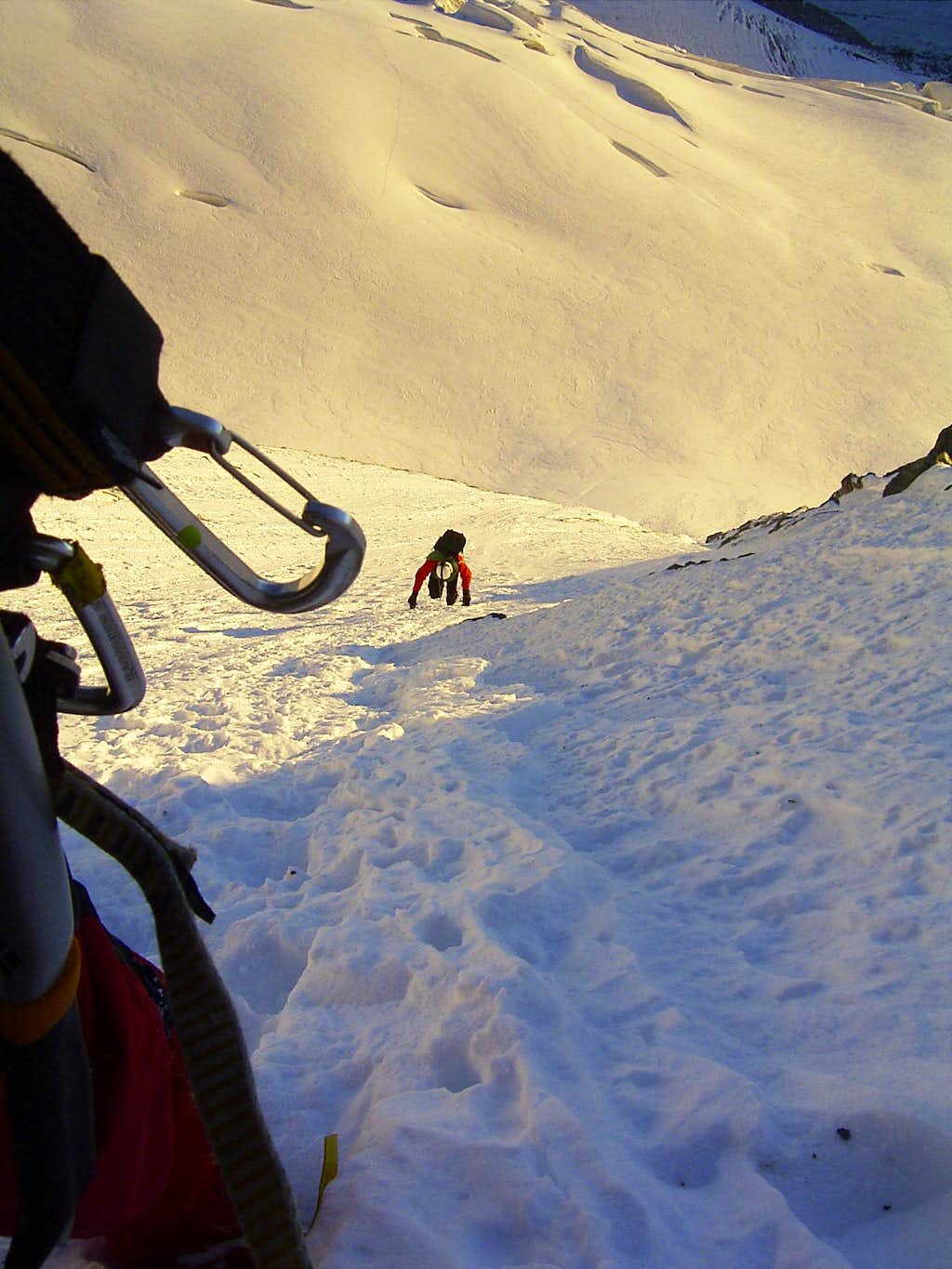 A view down the face, heading for the Mayerlrampe. Picture: Dennis. Glockner Group - Oktober 2005
« PREV NEXT »

Thanks man! It is always difficult to capture real alpinism in a photo, but this one does. I also can't wait to go climbing again :-)
Greetz, Jurgen

One might overlook the significance of the carabina merely for its apparent size when compared to the person ascending.

I really like this type of composition - as the carabina is ones lifeline. Hence its greater significance in the frame.

Foreground / Background combination is all important for good shot. I must improve. Should produce more like this with largeness in the foreground for powerful effects.
Cheers, Ray

Thanks Ray! I'm still learning about composition, but here it worked out pretty well. Although it was more of a lucky shot.

You can also look more for textures and shades of white (which you have in this shot - snow is, white, grey and blue. Which is also soft, or rugged. The exposure is perfect as its captured the detail in the shadow). Generally, the brain sees it as a nice shot, but mostly we don't understand why). A simple palette of complementary colours works well, as are shades from white through greys to silhouette black. Look for metallics and glistening. A low sun can often generate great contrasts. Try also to look for geometries, perspectives, vanishing points (where lines taper to infinity or horizon - these draw you in).

Not that I'm in any way a photographic expert. Just that I've seen so many sights and thought how to capture them. Sometimes the best image is the simplest. Most often, I try to avoid standing taller than the summit, just below is best - except Tenzing 1953 on Everest. http://beacononline.files.wordpress.com/2008/09/tenzing-norgay-on-everest-summit.jpg. It's just so inspiring and right.

Take a look at mamo's albums, he has some fab shots.

Of my own, I like this Velino shot, http://www.summitpost.org/image/551079/Velino-from-S-vice.html because it has textures and a triple depth (foreground, mid and distant). Subtleties like the foreground rocks, the large shadow in the centre, the cornice line on the summit, and the wisp of cloud. And some darks. Colouration is basic, but effective.

Sorry, I'm waffling - no job, small town, and only sheep for friends !! I look forward to viewing your next such shots.
Ray

Thanks for your comment Ray. There are so many great pictures on SP to see, still lot's of time to spend. Cheers, Jurgen

Take a look at Karrar Haidri. So many fantastics pics. Many worth 11 or 12.