I have always been intrigued by the unknown. And that is precisely why I am a peakbagger. I enjoy going to places I haven't been before. And while the idea of going some place I've already been has merit (e.g., to take my wife somewhere special that I've been), these return trips have one fatal flaw: they keep me from going some place new. There are so many places to see on this fair Earth, even just in Washington, and there is only so much lifetime alotted to me.

My interest in the unknown often leads me to seek summits that wallow in obscurity in fields of forgetfulness. These summits tend to not have any data for them, or no trip reports or access issues are available online. There are often no pictures out there. What does this thing really look like, because it doesn't look like much on the satellite image? That kind of thing. It is an act of exploration, an emprise in discovery, like trudging through dense brush to find a mine shaft labeled on a map. When you get there you don't know if the shaft is going to be there, or merely a caved in adit.

So this page is intended to bring to the Internet information on little summits that no one seems to know much about, if anything. For starters, this page will cover obscure summits in the Lyons Ferry region of Southeast Washington. In the future I will probably append to this page more information on more obscure summits. You are welcome to do so too, with the proviso that the formatting be consistent. Just send me a message and I'll add you in as a contributor.

SAND HILLS (1520+ ft, 20P)
I summited Sand Hills with Brie on May 14, 2010. These named "hills" are really just a broad undulation of sand dunes in an otherwise non-sandy environment. Brie and I approached from Highway 26 on the north, parking opposite the purported Sand Hills HP (1520+ ft). We walked a well-worn track (manmade or game trail?) a few hundred yards to the dunes then proceeded to run around the two potential HP contenders before returning to Michelle and Liam waiting in the car in about 30 minutes round trip.

LOST LAKE (HOOPER QUAD) (1440+ ft)
On Saturday, May 15, the Rowlenke family traveled to the Lost Lake on the Hooper Quad. This Lost Lake is north of the little town of Washtucna. This was Brie's 15th Lost Lake to swim in of 29 Lost lakes in the state. This was a quaint little lake, it very much feeling like a wildlife refuge. We drove Sutton Road (“Private Drive” huh?) to a junction that headed north up a ranch track through tall weeds then down through some swales and finally to the lake. The entire road approach seemed odd in the sense that there was no inkling that a lake could be down the road. But it is there. Oh yes it is there, with its serenity and its yellow-headed blackbirds flitting, perching, and crowing gently. 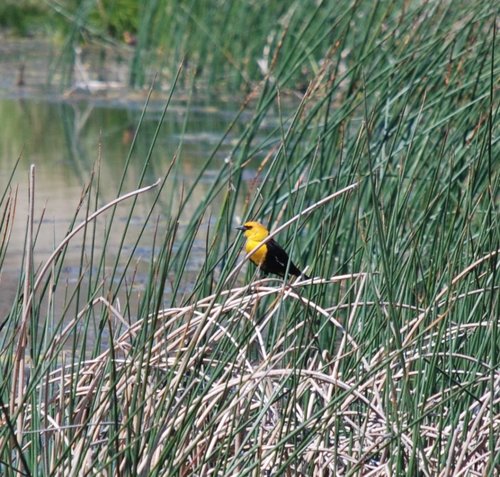 COYOTE BUTTE (526m, 1726 ft, 167P)
After Lost Lake we were off to the immaculately obscure Coyote Butte a few miles east as the wayward yellow-headed blackbird flies from the lake. The southern approach road, which starts by going underneath a trestle, was blocked by private property. So instead I located a route from the north. This route starts opposite a junkyard. From the road (Benge-Washtucna Road), one walks through a tunnel underneath a defunct railroad embankment then up a slope to the flat ranch land beyond. Here a view of Coyote Butte opens up and it is about a mile away. So I walked a bovine track toward my goal, the bovines themselves bustling away in a cloud of dust. Several wire fences (unbarbed) were crossed. Were they electric fences? I wasn't about to touch them to find out. I would later find out: yes they were. Coyote Butte is actually quite an interesting isolated fin in the middle of the braided terrain caused by the Bretz Floods. 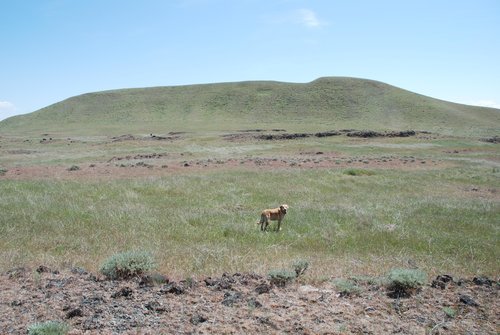 BLACK BUTTE (450m, 1476 ft, 33P)
After Coyote Butte we stopped in LaCrosse for some lunch in their lovely green park. We had struck out in two towns prior to LaCrosse trying to find a grocery store that existed, much less was open. It seems the recession has hit rural Washington hard. LaCrosse was not alone in this regard, even though it was the biggest of the towns so far. I stepped into what I thought was the grocery but inside was nothing but dusty, empty aisles and a few folks "renovating" the place. It seems the town had been without a grocery store for eight months. I said I just wanted two beers for the park. They directed me to the only business in town that was open. You guessed it: the tavern. Apparently, you can buy beers there and take them out of the place (it was a sleepy town, so who cares, right?). I ordered two of the only microbrew they had available. So we had lunch and a beer at the park and then were off to our next destination: Black Butte. Now Black Butte had been intriguing me the most in planning this trip. Why was such an apparently insignificant (and unprominent) summit even officially named on the map? The butte isn't visible from any town, much less any homestead, for it lies fairly near to the creek in a shallow dale. Off of Wiedrich Road northeast of the summit we took a dirt track beyond a gate, following it for over two miles to our destination. As we came over a rise we saw it, Black Butte, in all its unmagnificence. It is even more immaculate and even more obscure than Coyote Butte. I got out and climbed to its top. It's just a small island of basalt in an otherwise uninteresting ranch land. But we were joined by a lonely herd of cows. It seems they wanted us to open the last gate so they could get out. No dice, bovines! Oh yes, what was the microbrew we picked up in town? Black Butte Porter. Coincidence or by design? I can't see how anyone in LaCrosse would even know of Black Butte, so I'm thinking coincidence. 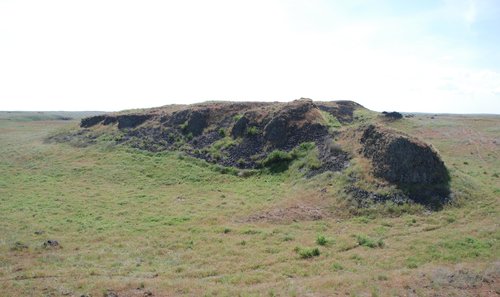 BEACON HILL (573m, 1880 ft, 289P)
This little hill with a tower (beacon) on top is south of LaCrosse. It's a good viewpoint. It's not much else and can easily be driven to its final summit road, which is a tad steep but probably doable in dry weather. If not, just walk it. It's only 300 yards and your fat ass needs the exercise anyway.

PK 1187 (362m, 400P)
From Lyons Ferry Park (no longer a state park, now leased by KOA), find the paved road leading north up the east side of the trestle. This road leads to a house and a maintenance yard of sorts for the park. Are you allowed to drive this road to the house or not? The sign was unclear. I decided to park at the gravel "trailhead" at a gate where this sign is located and walk from there. It's only about an extra quarter-mile. Brie and I walked up a quasi-nature trail east of the road. This trail led to an overlook east of the house on the lower south ridge of the peak. At this point the trail petered out so I simply went crosscountry to the top, taking in the wonderful views of the lake and escarpments to the east and southeast of the peak. We kind of expected to see a rattlesnake but never did. We made the flat top in about 40 minutes from the car and were lucky to be witness to a train coming. We watched it (well, I don't think the dog watched it) head to the trestle and cross the Snake River. The coulee between the peak and the railroad track is quite picturesque. You can't drive up it because there is a gate just beyond the house.

LOST LAKE (KAHLOTUS QUAD) (1043 ft)
For the final destination of the trip, Brie and I hopped out of the car in a pullout from Hwy 260 just before the town of Kahlotus. We traveled NE crosscountry, still not encountering any snakes. This Lost Lake resides in a 100+ ft deep natural depression. I had a sneaky suspicion it was going to be a dry lake. Sure enough, it was. Bone dry. But maybe this was a good thing, for this meant Brie couldn't swim in it. Why would that be a good thing? Isn't that the whole idea, that Brie swim in each lake? That is the idea. But in this case, the dry lake bed was pockmarked with hundreds of bovine hoof holes, meaning this thing aint very deep when it does have water in it and it is probably a fetid pool of cow manure--stinky, much less healthy to be around. But that's okay, it's the thought that counts and we were soon back at the car 40 minutes after we left it. Note that this is the second dry Lost Lake we've visited. The other one in Lakewood is seasonal and we were there in the wrong season. For us it was merely a funky bushwhack (too hard to explain).