Feel the heat in El Chichon: exploring an active volcano in Chiapas, Mexico

History of El Chichón
El Chichón (also called El Chichonal) is the name given to a triple dome complex volcano near the town of Pichucalco in the northern region of the state of Chiapas.  It is a region of jungle covered mountain peaks and rural towns and villages.  El Chichón volcano was thought to be dormant until March 28, 1982 when terrifying explosions began and for several days apocalyptical destruction occured to the surrounding region totally annihilating nearby villages killing more than 2,000 people and sending so much sulfur dioxide into the stratosphere to cause measurable cooling of the northern hemisphere.  A cloud of volcanic ash covered an area over 100 km in diameter.  The volcanic material that fell from the sky forced thousands to evacuate.  The falling ash fell so thick in areas that crops and livestock all died in the cataclysmic event.  The eruptions of 1982 left a 1 km diameter crater about 130 meters deep with an acidic emerald-green lake in the middle.  El Chichón continues to be moderately active.  Fumaroles continously emit hot gases and vapors while springs send forth hot boiling water from below.  El Chichón is a phenomenon of nature.

Acidic lake of El Chichon
Getting to El Chichón
1)  I took a bus from the Central de Autobuses de Tabasco in Villahermosa to Pichucalco for MN$73 (2 hrs 15 min).
2)  I spent the night in an inexpensive hotel called Los Faroles for MN$140.
3)  Early the following morning at 5:00 AM I hopped aboard a combi (collective minibus taxi) behind the bus terminal in Pichucalco for just MN$12.
4)  The combi was destined for Ixtacomitán and arrived there in about half an hour.
5)  Across the street from the combi stop is a taxi stop where I shared a ride with two other passengers to Chapultenango.  The cost was MN$23.
6)  I asked to be taken to the road that goes to El Chichón because I did not want to hire a guide.
7)  From the edge of town the dirt road leads through cattle pastures for about 7 km. to the north to Ejido el Volcán.  A rancher pulled and gave me a ride part of the way.
8)  From Ejido el Volcán there is a big evacuation route sign and then a gate in the barbwire.  I opened the gate and passed through.  The trail to El Chichón starts there.
9)  The trail leads through several barbwire gates separting different plots of pasture land and over streams.  I was considerate and closed all the gates I went through.
10) After about two kilometers the terrain becomes more inclined and rugged with open fields of grass and orchids and few trees.
11) The trail crosses a deep gulley eroded through the volcanic tuff.  The stream bed is tainted a rusty red color.
12) A few areas of the trail go through eroded gulleys with dense tropical vegetation growing.
13) The trail steepens slightly as it goes up between two of the domes of El Chichón.
14) Then the rim of the crater is clearly visible.  The trail leads right up to the top of the crater of El Chichón with beautiful panoramic views.
15) A sign prohibits entry but behind the sign there is a trail that leads down into the crater.  The trail is steep and rocky so extreme caution should be exercised.

Hiking among the hot fumaroles inside El Chichon
What to wear
I prefer to wear shorts and my favorite all-terrain adventure sandals from www.LunaSandals.com.  They are so versatile and comfortable.  I had absolutely no problem hiking in these sandals but a person should wear what they are most comfortable in.  I wore a tank top and got a little sunburned on the back of my neck and shoulders so a long-sleeve explorer shirt is advisable to wear as well as a hat to protect the face.
How about food and water
I camped overnight and came back down the next morning.  During a 24-hour period  on El Chichón I ate a dozen hard-boiled eggs, about half a kilo of a homemade corn and cacao fruit bread, and I drank 3 liters of water.  However, I recommend bringing 4 liters of water and having a backup plan to acquire water from the streams.  I always travel with iodine tablets for that purpose.
How long of a hike
The average person completes the hike from the trailhead at Ejido el Volcán to the summit of El Chichón in about 3 hours.  Coming back down is obviously faster.  Walking from Chapultenango to the beginning of the trailhad at Ejido el Volcán takes about 2 hours.  It is important to get an early morning start if planning to return the same day.  There are no hotels in Chapultenango so one would need to get to Ixtacomitán or Pichucalco before too late.
Where to camp
Near the summit of El Chichón there is a cleared grassy area with a campfire in the middle and I saw a blanket lying there too.  Obviously people camp there from time to time.  I chose to camp the night on a patch of dry grass right on the rim of the volcano.  I used two big plastic trash bags as a sleeping bag to protect me from mosquitoes and rain and it worked just fine.  No mosquito bites and I stayed dry despite a light rain that lasted a few hours. 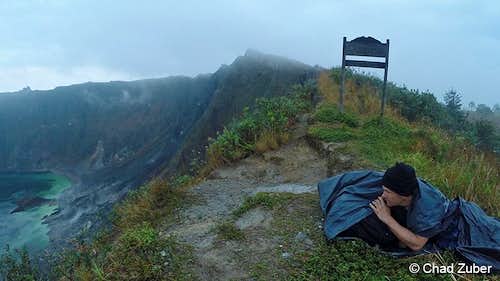 My campsite on the rim of the crater
Where to get more information
Epic YouTube video of my trip to El Chichon:  El Chichon video
I wrote a very detailed blog about this adventure here:  No Gringos Allowed
There are tons of photos from my trip there too. 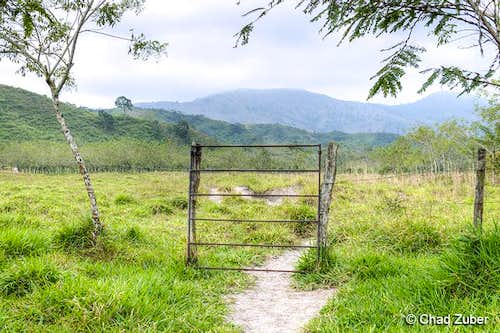 Gate through green pastures.  El Chichon is ahead between two domes. 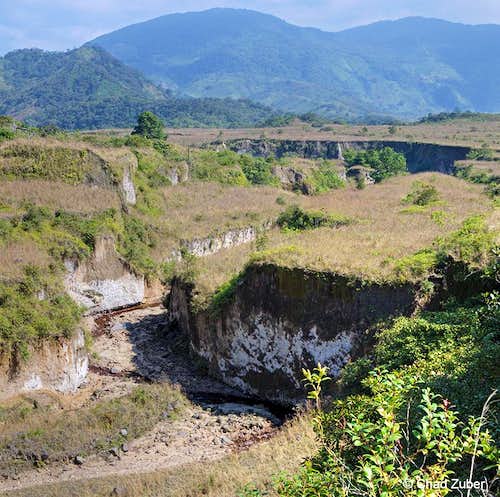 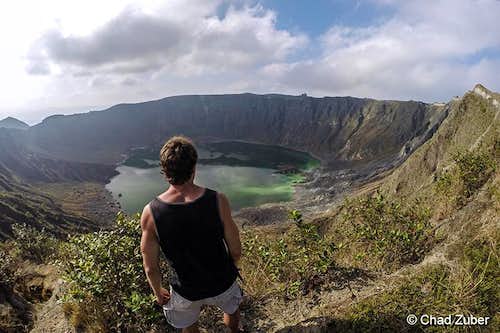 Viewing El Chichon from the top