Wait… Did Someone Mention Summit Ladybugs? 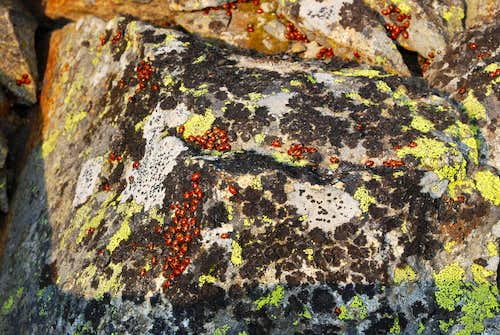 Who Cares About Ladybugs?

Technically, and contrary to popular belief (at least in North America) ladybugs are not true bugs at all. They are beetles. Many scientists prefer referencing the names ladybird beetle or lady beetle as identifying names, rather than the more widespread and less accurate ladybug moniker. However, for the purposes of this article, the more common and recognizable (at least in North America) ladybug name will be referenced.

The name of the beetle is rumored to have been derived in Europe during the Middle Ages. European folklore states there was once a plague of insects devouring agricultural crops. After Catholic farmers prayed to the Virgin Mary for assistance with getting rid of the menacing insects, legend claims that beetles came from the sky and began eating all of the crop-damaging insects. The farmers, believing their prayers were answered by the Virgin Mary herself, nicknamed the saviors “Beetles of Our Lady,” which later got shortened down to ladybugs.

But do not be fooled by the name. Ladybugs are certainly not damsels, let along damsels in distress. The beetles have been around for many millennia, with the earliest identifiable fossils of ladybug ancestors dating back to the Cretaceous Period (between 144 to 65 million years ago). Ladybugs are found throughout the world, on every continent but Antarctica. In fact, there are over 5000 species of ladybugs, approximately 450 of which are native to North America.

Of those many ladybug species in North America, only one of those species is a regular peakbagger:
Hippodamia convergens, the convergent ladybug. 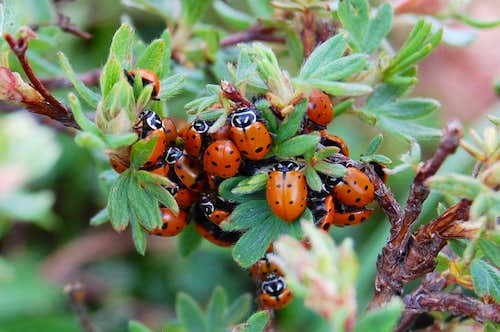 Ladybug, ladybug fly away home,
Your house is on fire and your children are gone,
All except one,
And her name is Ann,
And she hid under the baking pan.
-Old English Nursery Rhyme

Ladybug larvae hatch within 3-6 days after eggs are laid. Like adults, larval and pupal convergent ladybugs require consumption of aphids to ensure survival. This is yet another reason that adult convergent ladybugs seek areas of large aphid populations; it ensures the survival of the species. Not all adults reproduce during aphid-feeding periods; some will wait until the following Spring to do so. As the aphid-feeding season ends, the species begins migrating towards potential hibernation locations.

The convergent ladybug is the most common species of ladybug in North America, and as such has many places to choose for hibernation locations. As the aphid-feeding season ends towards late Spring, many convergent ladybugs remain in those areas and find hiding places such as under leaf litter or under logs for which to begin hibernation. Many others will migrate away from the feeding areas to find similar low elevation locations for which to begin hibernation.

Still some others, especially in the western half of the North American continent, will migrate far away from the feeding areas to mountainous areas… 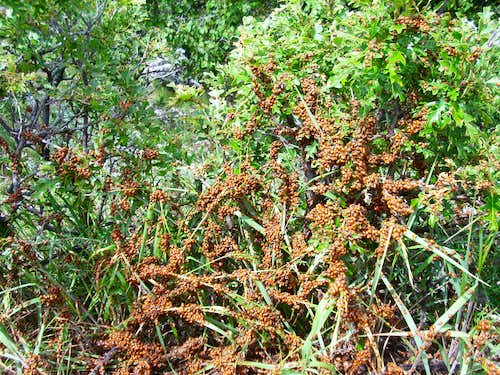 Head For The Hills!

During late Spring and early Summer, many convergent ladybugs begin migrating towards mountainous areas. The trek is not a graceful, straightforward type, as wind currents and air temperatures greatly influence migratory patterns. Winds help propel the flights of convergent ladybugs, pushing them higher and closer towards higher elevations. However, once the ladybugs reach air temperatures of approximately 55°F they need to stop flying, triggering a temporary free-fall until their bodies can warm up enough to continue the migration. This causes a sort of repetitive oscillation effect, the side-view of which would look like a sine wave. 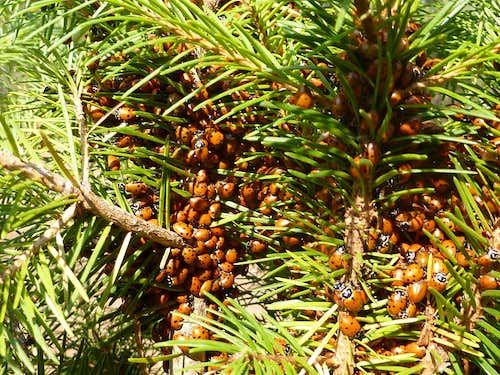 At Summit Of Woody Mountain (Arizona). Photo Credit: "Alex Wood"
Mountain-bound convergent ladybugs are not typically in swarms during these in-flight migrations. Occasionally, they will land on ground to consume pollens and nectars as a means to fatten up their bodies for survival during hibernation. However, once they find their desired high elevation summits they tend to swarm en masse and form colonies. Most of these mountain summit goals range between 6000’-8000’ elevation, but some might be as high as 10000’ elevation (or possibly higher) depending on current conditions. 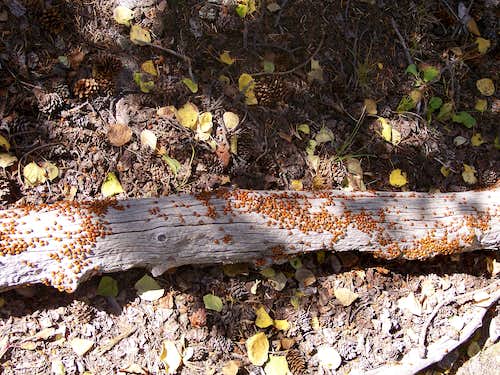 Above 10000' On Rudolph Mountain (Colorado). Photo Credit: "sarah.simon"
It is during these periods of summit swarms that mountaineers most frequently notice the ladybugs. Where there is one ladybug there is usually hundreds if not thousands congregrating nearby. Many ladybug dealers/collectors claim that some of these mountain colonies can contain as many as 500 gallons of ladybugs, with each gallon containing up to 72,000-80,000 ladybugs. The beetles remain on their high elevation homes throughout the Summer months. This timeframe represents the beginning of diapause, which is the nine-month period of hibernation process for convergent ladybugs. Many within the species will begin mating during this first stage of diapause, and larger colonies have greater chances for successful mating. 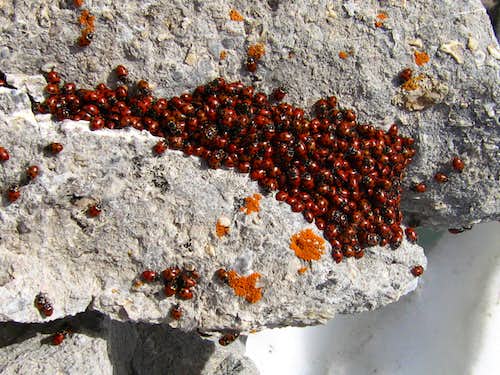 At Summit Of Gobblers Knob (Utah). Photo Credit: "Garfimi"
It is unknown exactly why many convergent ladybugs seek out high elevations, but many people speculate it is because high mountain summits are located far away from most primary predators such as other insects, birds, and spiders. It is also unknown why certain summits are preferable ladybug gathering sites over other nearby summits, but many people speculate it might have to do with the coloration of the summit terrain, surface temperature of that terrain, and/or hiding places (such as cracks) within that terrain. 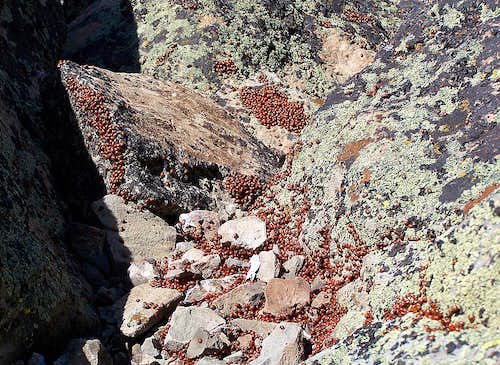 Time Flies (And So Does A Ladybug)

Those interested in seeing this unique high elevation phenomenom should do so while the opportunity presents itself. During late Summer and early Autumn, as the weather becomes rainier and temperatures cool, many of the convergent ladybugs leave the high mountain summits in favor of lower elevations. In many instances, they migrate to sub-alpine areas within 2000’-5000’ elevation, only to hide under leaf litter, in or under logs, or other secluded locations for which to spend the remainder of their diapause in a dormant to semi-dormant state. 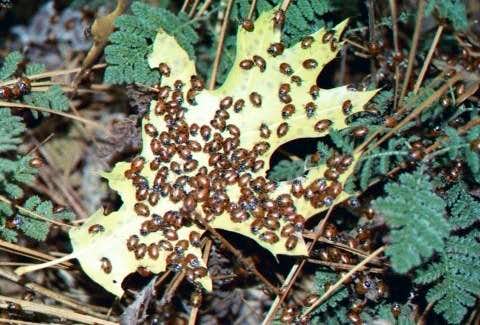 In Sequoia National Forest (California). Photo Credit: "tarol"
These locations later become covered for many months by Winter snowpack, insulating them from the harsh sub-freezing winds and temperatures that would otherwise kill them. Some days might occasionally be warmer than normal, and during those periods some mating will occur as the beetles temporarily become active again. Later, after temperatures become warmer during late Winter and early Spring, the ladybugs begin to emerge and migrate back to their Spring aphid-feeding and reproducing areas, restarting the cycle.

North America is not the only continent which experiences summit ladybugs. Several relatives of the convergent ladybug create similar phenomena on other continents. 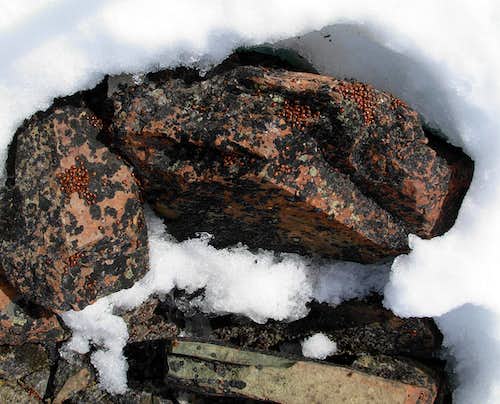 So the next time you find colonies of ladybugs converging on on a summit, just remember it is a natural occurrence that should be treasured and enjoyed while it lasts.

Are There Other "Exploring The Mystery Of" Articles?

Very interesting! I saw the photo from Ojo and voted for it back in nov 2010 and i kept thinking about it for a while.
But nobody had the idea of doing a research about this wierd behaviour.
Very, very cool man. Glad i saw it and read it.
Cheers
Paulo

Re: Man this is

At first I wasn't sure why you wanted my stupid picture of ladybugs, but now I know and what a well put together article. I remember coming up on the summit of Gobbler's and wondering why there was so many ladybugs and now I know. Very good article and very informative. Thanks for posting!

I am certain it sounded like an odd request (considering the photo), but thank you for obliging and for the nice comment.

This swarm consists of a mix of species; the thick clumps are various beetles, though there were plenty of dipterans around too.

Re: not just ladybirds

You are correct. Swarms and mountainous migratory phenomena are not isolated to ladybugs/ladybirds; similar swarms and migrations also occur for some animals and some other insect species, for a variety of possible reasons. Ladybugs/ladybirds are just the focus of this particular SP article. I like your photos. Thank you for sharing them!

Great article, well researched. Also, this was a super way to leverage the collaborative possibilities within SP (by sharing other user's photos). Nice work!

Thanks again for allowing me to use yours. Not only is each photo on the main page from a different SP member, for the most part each photo is from a different state or region... which I hoped would help illustrate that this is not an occurrence which is specific to one small area.

I prefer to think they choose summits for the view!

A very enjoyable read. May I add that the little critters can bite when in 'voracious' eating mode, a surprise to me.

The first time I saw this phenomenon was on the summit of Clark Mountain (8,602 ft.) in Washington in July 1977. Interesting article, thanks!

Your article caught my eye because I have seen the phenomenon of a thousand or more ladybugs gathered on an 11,000 foot Wasatch peak.

I witnessed this phenomena twice here in Arizona.

Guess I should of snapped a picture, but didn't in my wildest
dreams figure it would appear in an SP article. Great job!

Especially when written by a man, it probably takes people off-guard even more! I was fascinated by the phenomenom, and wanted to share it with other people. You (we) are not alone.

I have seen this twice on 10,000 Ft. Summits and both times I was perplexed. it did not make sense to see so many "LADY Beetles" in such harsh conditions. now I can enjoy this phonominon with better understanding. Cheers!

Thanks for the research

but in the end it is still not clear why are the ladybugs swarming up there?

The original ladybug is the European 7-spotted variety, linked with Virgin Mary through the concept of Seven Sorrows / Seven Blades piercing her heart (as in the famous Dolorosa de la Siente Punales icon, visualizing the prophecy of St. Simeon to Virgin Mary). And it is pretty much restricted to Germanic languages. But the ladybug must have been associated with gods even before that, if in so many other European languages it's variably known as God's cow / hen / mare...?

Also why the Greek name "Hippodamia", the horse-traineress, specifically for the American ladybug?

Re: Thanks for the research

I figure it must be instinct that they travel as they do, as their mating locations tend to occur away from most potential natural predators. As for the scientific name, I will see if I can find out some more information...

Re: Thanks for the research

Sorry, not sure what the scientific name has to do with the
price of tea in China. : )

Until now, I always thought THEY were the fifth BEATLE.

Just discovered that the British apparently switched from "ladybug" to "ladybird" because of their Victorian-era hypocrisy. The word "bug" <= bugger has become associated with sexual perversion esp. bestiality through the "Bulgarian heresy" of Cathars aka Bogomils.

Re: Ladybird vs. ladybug

Thank you for finding out that piece of historical information.
Very interesting! Much appreciated!