Emilio flew into Denver and took a shuttle up to Fort Collins. I picked him up after work, hit REI for last minte gear and snacks, then we carb loaded with pizza and beers at a brewery.

Anxious day in the office for me as we kept an eye on flash flood warnings throughout Wyoming and Colorado. Matt drove up to Fort Collins when he got off work, and our team hit the road around 5:30pm with my Julia - driver / support crew / girlfriend extrordiaire - at the wheel. The rest of us tried to hydrate and relax as much as possible.

Julia at the wheel: 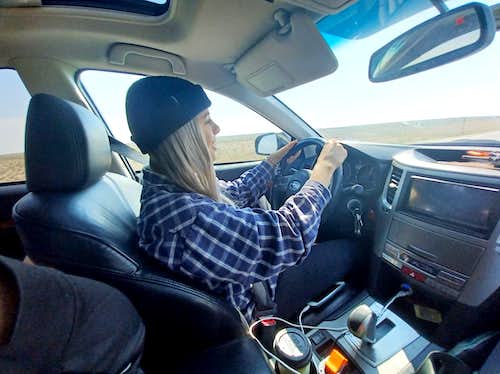 Emilio and I have been going on adventures in Wyoming together since we were 16. The stories we tell of the raw and harsh conditions, mixed with the unpreparedness of our youth - aged with time and exageration - had created a lore over these mountains that must have been a bit intimidating for Matt on his first adventure to Wyoming. The conditions on I-80 as we drove west certainly didn't help in creating the impression of it being a calm and tame place.

Intense thunderstorms on the drive: 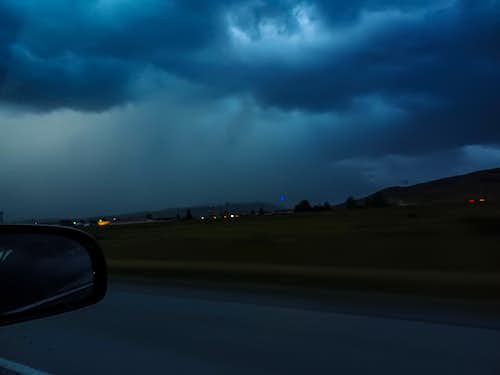 For moments on the dive, the heavy rain forced us to come nearly to a complete stop. The intense flashes of lightning and sharp cracks of thunder were not conducive to getting any pre-run car naps in. Eventually the stoms let up. Shades of blue in the sky turned to gray, and then the black of night, and we made good time once again, turning north towards Pinedale and then up the mountain to the trailhead at Elkhart Park.

We arrived at the trailhead around midnight, quickly packed our running packs, and set off into the night. 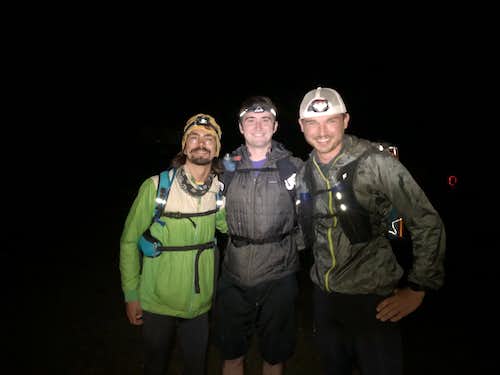 Excitement and the even terrain made the first miles flow by, and our primary focus was on dodging puddles and not pushing too hard. The rain had stopped and the temperature had warmed, creating near ideal condidtions. We ran opportunistically when the footing was consistent, and I kept an eye on the GPS to try and ensure our pace was never too far below 15 min/mile. 8 miles in we stopped for water and assessed our condition. My left ankle was getting stiff from rolling it a few times running rough terrain on some downhills. Matt was feeling the altitude a bit on the uphill pushes. Emilio was on cloud 9. Overall, we were making great time and feeling strong.

High quality image of running through the night: 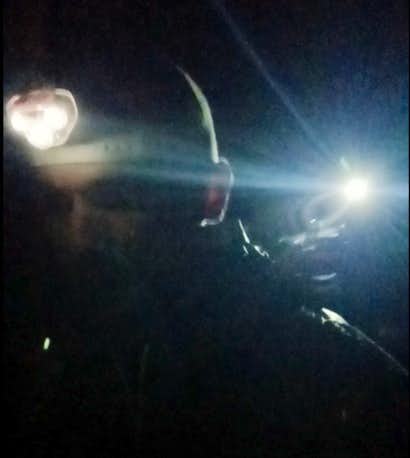 By the time we reached Seneca Lake the moon was creating a glow through the clouds and provided a bit of illumination to our surroudings. Emilio and I had been this way on a failed attempt of Gannett in late fall of 2019, so I eagerly described to Matt the surrouding beauty that he could just barely not see. Smooth traveling continued until another stop for water at Island Lake, where the bag for the Sawyer Squeeze water filter began leaking badly. We improvised and tried pluggin the holes as best we could, and got enough water to get us through the next section.

Emilio led the way, pulling us up into Titcomb Basin as the sky began to glow with the first light of the day 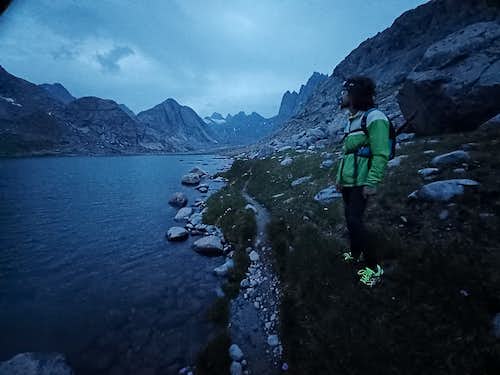 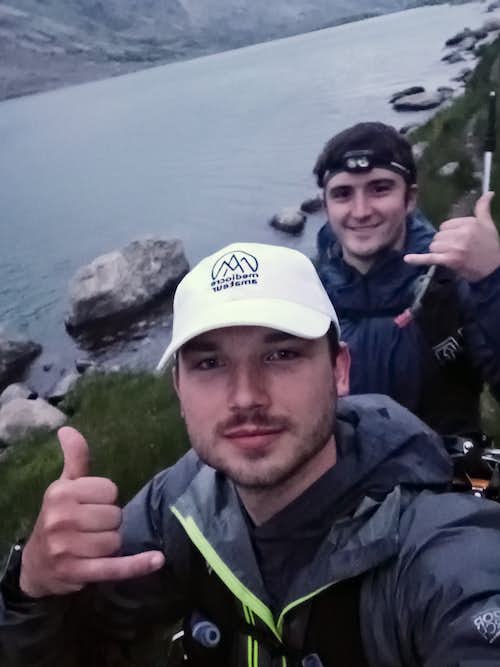 Meadow above the Titcomb Lakes: 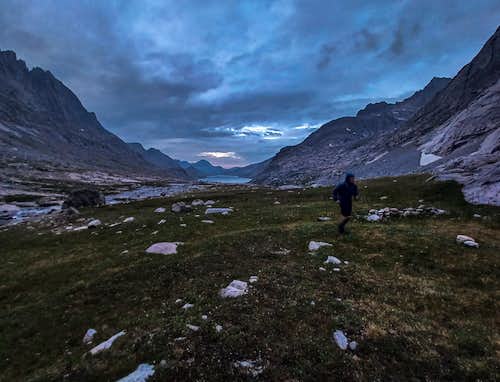 Next up was the climb up Bonney Pass (aka Dintywood Pass). Before we started up, we took a minute for some breakfast bars at the top of the valley.

Wildflower meadow at the top of Titcomb Basin: 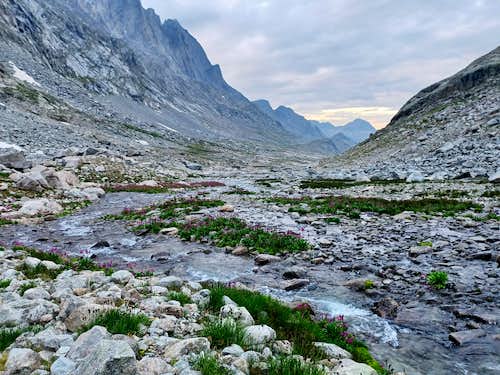 For me, the transition from steady pounding to scramble climbing was a welcome change. I got my upperbody involved and my legs got to stetch out and activate isometrically a bit. The loose rock and choss slides felt like home to Emilio and I, as we were fresh off a trip in the North Cascades. For Matt, the lack of sleep, sudden gain in altitude, and unstable terrain were stoke draining. 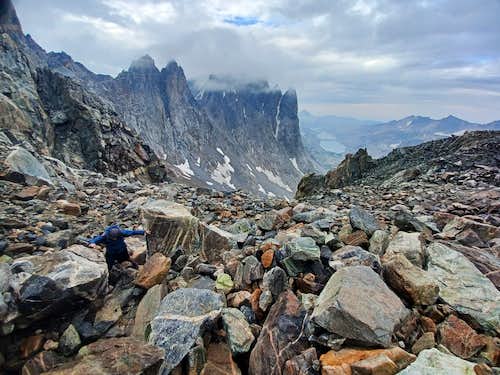 Upon reaching the top of the pass and looking across at the intimidating view of Gannett, we decided to leave a supply of food, water, and warm/dry clothes with Matt at the pass, and Emilio and I would carry on to attempt the summit.

View of Gannett from Bonney Pass: 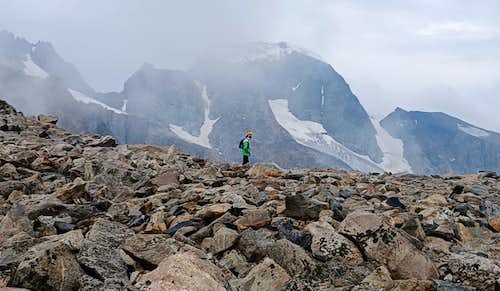 The weather had been questionable all morning, but Emilio and I had stood on this pass before and looked across at Gannet. Turning back wasn't an option for us this time. We both felt suprisingly strong for being 19 miles in, and having just enough visibility to briefly see the summit through the clouds gave us enough confidence in the conditions. We bombed down the far side of the pass and onto the glacier. The ice was harder and slicker than any glacier I had previously been on. Emilio said that the channels of water running over the surface reminded him of the Blue Glacier on Mt. Olympus.

Looking back up at a cloudy Bonney Pass from the glacier: 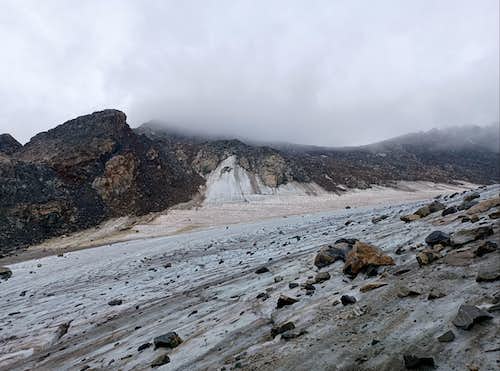 We elected to take the SE Coulior route for a couple reasons: it looked straightforward from Bonney Pass, it avoided any question of negotiating the bergshrund on the Gooseneck Glacier, and we had gained a lot of confidence on steep glacier on our recent cascades trip.  The glacial slope leading up to the coulior was very smooth, slick, and steep looking, and so - given that Emilio was in Yaktrax and not crampons - we stuck to the far right of the valley where the glacier was broken with gnarly and deep crevasses (but had softer ice). By the time we had reached the couloir we had lost all visibility and were completely swallowed in the fog. The snow in the coulior was great for me in crampons, less so for Emilio in Yaktrax.

Emilio on a steep section of the coulior: 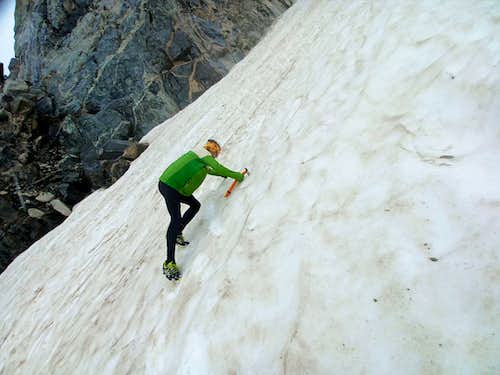 Freezing rain started falling on us as we reached the summit ridge, so we quickly scrambled over low angle snow and rock to the true summit - around 11am. 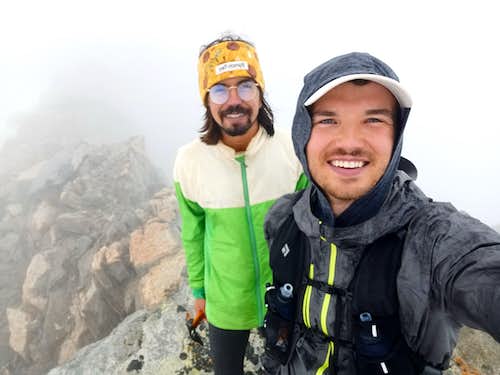 Views from along the summit ridge: 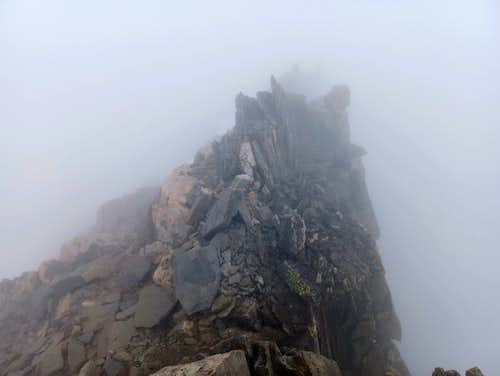 We made radio contact with Matt who claimed to be cozy in the bivy back at Bonney Pass. I was even able to get a few texts off to Julia to make sure she was doing ok waiting for us (what a saint!) and to update her on our progress. Spirits were high, but the first real crux of the day occured as we reached the top of the coulior; The freezing rain had frozen my hands to the point that I was barely able to work the straps and secure the crampons to my feet. Deep breathing and slow moving down the steep sections of the chute, and we were back on the main glacier. The zero visibility remained as we descended, and it felt like a giant maze picking a snow finger and hoping that it didn't dead end in un-crossable creavasses.

Towards the bottom of the glacier, Emilio slipped on some smooth ice and landed hard on his hip. His axe went sliding down the slope, but luckily he was able to keep himself from gaining any momentum. I helped him to some softer snow, and luckily was able to find the axe down the slope. After a bit of limping, Emilio (toughest guy I know) loosened up a bit and we started making good progress up towards Bonney Pass.

Matt had taken advantage of his head start, and worked down the pass to the top of Titcomb Basin. Emilio and I found him in good spirits, and we discussed our goals for the trek back.

Meeting back up with Matt at the top of Titcomb Basin: 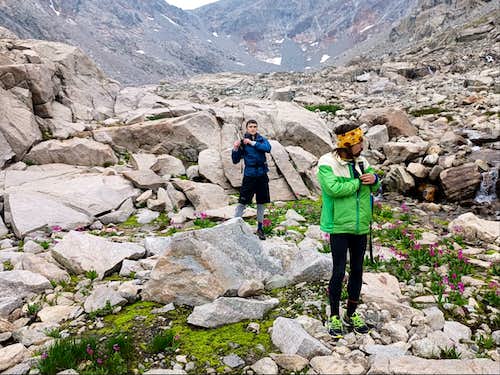 I had been pounding caffeine-filled Cliff Bars for the last few hours and I was feeling ready to run, and with a goal of sub-24 hrs, we made good time out of Titcomb Basin. 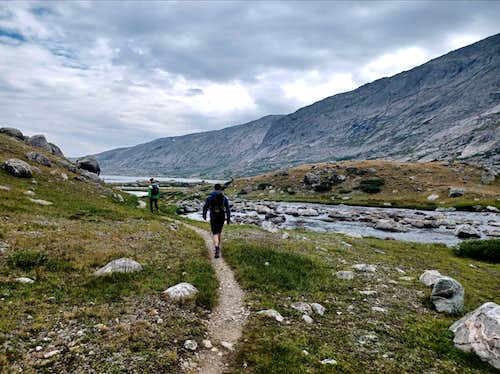 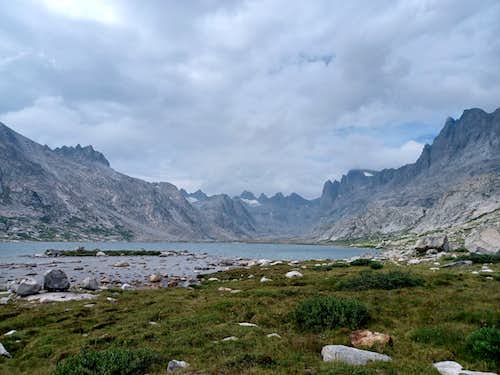 Things went south a bit for me as we neared Island Lake. My feet were a bit wet, and blisters were forming. I also realized I had consumed way too much caffeine (I hadn't realized quite how much was in each bar) and my heartrate would easily climb out of control. I focused on some deep breathing and slowed the pace.

Matt shouldering the pack after a brief break at Island Lake: 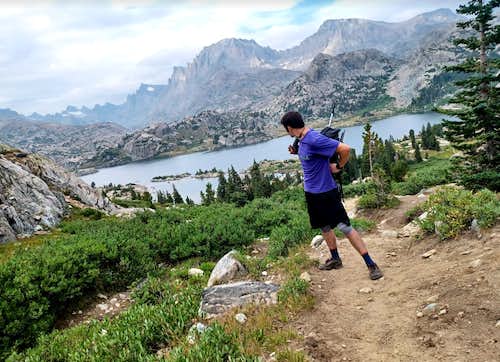 Not long later I realized Matt and Emilio were fighting their own demons, and we suffered together, walking 30 minute miles through the next several miles.

There isn't a lot to say about the remaining miles. We switched our headlaps on with about 5 miles remaining and ground it out. I remember thinking that I might as well be walking on hot coals the way my feet felt. I guess I should have been more grateful that after 40+ miles the bottoms of my feet were the only real pain I had.

We arrived at the trailhead around 11pm. Our total time was 22 hrs 46 min. My watch died before making it back, but at the summit our distance was 22 miles and change, so I would estimate our total to be 44-45mi. We were at 9500 ft of vertical gain when the watch died, so maybe 10,000 ft total.

I hopped into the back of the Subaru with Julia (a saint for putting up with my stink) while Matt and Emilio crashed onto pads on the ground.

In the morning we got breakfast in Pinedale. We must have been quite the sight crossing the street, with Julia acting as a crossing guard while 3 young guys slowly limped like old men across the main drag. After breakfast we drove back to Fort Collins, grilled some chicken, and even got in a few games of Mario Cart before getting our first real solid sleep since Thursday night!

Mario Cart at my place back in Fort Collins: 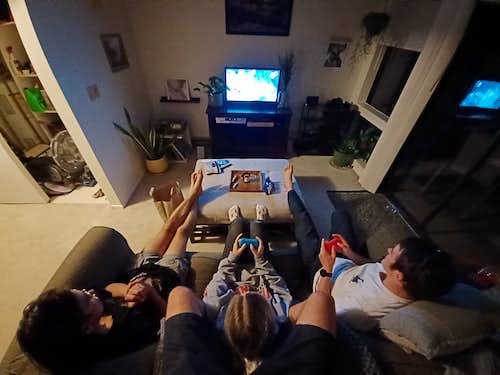 I distinctly remember thinking in the last few miles that we needed to finish under our goal of 24 hrs so that I'd never have to do this again. However, given that my feet were my only real limiting factor, I have been left to wonder how much time might have been shaved off if I had an extra pair of dry socks along. A few days later I am still mentally wiped, but my body is feeling good. I don't know if I'll ever do Gannett in this style again, but I have been finding myself catching glimpses of Long's Peak and wondering if I can do it in a light and fast running style after work one day. The experience was certainly a perpective shift, and I'm grateful to have friends like Matt and Emilio to suffer through it with me (as well as a partner like Julia to support us and spend a weekend in this fashion). As always, I'm just grateful for the ability to move in the mountains.

Great feat over all, but even more so for Emilio who lives at about 0' elevation.