Gavilan is really a hill, because it does not rise 1000 feet above the surrounding terrain. That is, if you remember the film about an English guy ascending a hill and descending a mountain. Locally prominent, it's a nice solid way to spend a couple of hours. Gavilan is found north of the Valley sprawl that developed in the last 10 years on the northern I-17 corridor north of the 101 loop. Anthem, the development with a "master plan", is just to the south and the newest section of it remains un-built about 1 1/2 miles to the south of Gavilan. This peak is doable year round, but not recommendable to the uninitiated in summer or when temps top 100. 115 would not be uncommon for a high temperature in the peak of summer.

Views extend from the Bradshaws in the northwest, to the Matazals in the east, to South Mountain and the Estrellas to the south, as well as the city of Phoenix, and the small hills and sprawling new city of Phoenix to the southwest. The Central Arizona Project canal (CAP) can be seen passing to the west and south. Lake Pleasant is off to the west. Because it is part of the CAP canal, it is always full or nearly so.

Sidebar: for those that don't know, the Central Arizona Canal is the legacy of Barry Goldwater. It pulls water from Lake Havasu, the most polluted of the Colorado River Lakes, and send it 361 miles across the Arizona desert to places as far away as Tucson. Apparently, if that canal ceased to deliver water, places like Tucson would be worthless. Not sure about the Valley, as it has Salt River water.

From Phoenix drive north 33 miles to exit 233. Get off on the east side of the I-17 and visit the town of New River. Your peak is a mile or two to the southeast. It is the boldest peak near this exit. As with most Arizona peaks it is probably best to approach this one in the winter or spring. It might become an expedition in the summer! Regardless bring lots of water since desert mountains are dry places. The hike looks as if it is about a mile and rises 700 feet nearly all of the rise is in the last quarter mile.

Gavilan may be on private land, or public, but I do not know. All around it's base, there are dirt roads built into the desert for development. Numerous "drug lord" homes have been built close to it. Currently, access does not seem to be an issue and so long as the mountain is respected it will probably continue to be accessible. This was not a grazing area, so there are no fences, nothing is posted, and any private landowner is not making their presence felt. I do not think this is or ever was BLM land, but it may have been AZ State Trust, and if is was, it has likely been sold to a developer. Regardless of the property ownership, the peak and hill see traffic, somewhat frequently. Over the years, trash from local billies has been left on it. Mostly beer bottles and the like, but there appears to be the sense in the area that this peak is public domain, if not literally public land.

There are various ways to summit Gavilan. The two most common are the eastern slope, which ascends a modest class 2 talus slope, and a rough class 2 use trail on the northwest face. There is also the option of the western ridge. The western ridge is by far the most exciting and challenging way to summit. It is surprisingly solid class 3, with various class 4 and 5 variations. Much of the looser rock has been cleaned away over the years by locals. If getting into uncomfortable terrain, there is a class 2 variation which bipasses the summit ridge to the north.
There is/was the option of the southwest ridge which leads up to the west ridge, but a large feature( which SPer Scott Mitchell dubbed the "monkey face") fell away during the wet winter of 2010. One thing is certain about the ridges of Gavilan, they are often loose and rotted, and recent evidence has shown that they are prone to collapse. Choose wisely, if going on more challenging routes.
Since the most recent beta I have is of the west ridge, here is a more detailed route description: 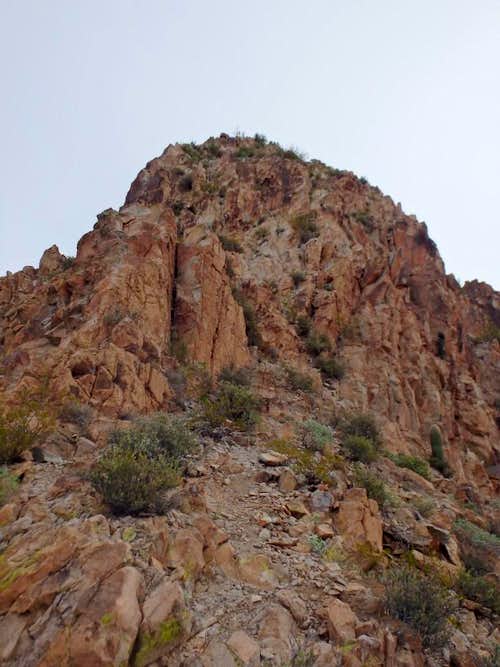 The class III summit ridge.
Mileage: 1.25 roundtrip
Elevation Gain: 1150'
Class III-IV if following the summit ridgeline from the high saddle, with a class II variation bipassing this to the north.
To access the west ridge, take I-17 and exit at New River Rd. Turn east towards Gavilan and turn right onto Frontage Road. After 0.3 miles, turn left onto W Meander Road (dirt). Follow this for 0.4 miles and turn right onto W Gibbons Rd, followed by a quick right onto 35th Ave. Continue on this for 0.5 miles where it turns east. Before turning back south continue straight onto a dirt drive way of an undeveloped lot. As of late 2015, there was a white for sale sign at the start. Take this to the cul-de-sac at the end. 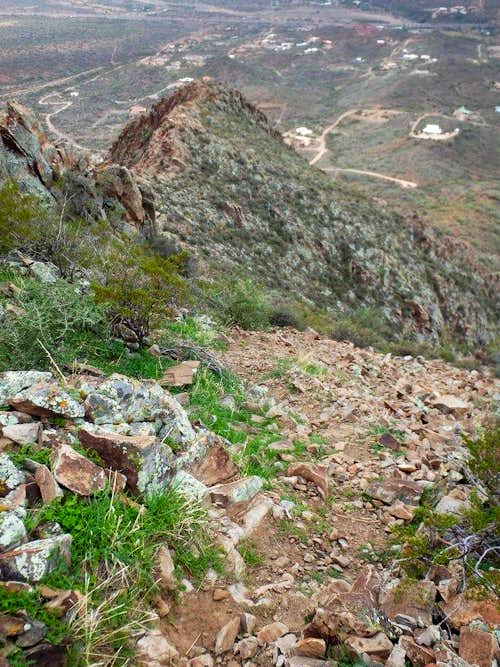 Class II alternative
From the parking area, there is an obvious use trail that heads directly upslope, staying north of the ridgeline. After about 0.25 miles, it flattens a bit a traverses beneath the ridgeline rocks. Continue on the trail to the base of a class II gully, following this up, trying to keep with the trail. At the top of the steeper portion of the gully, the trail continues to traverse east, staying off the ridgeline up until the high saddle. From here there are two options. You can climb the class III-IV ridgeline directly. The moves are quite solid and should really not be over class III, although the exposure to the south is significant.
The easier option continues to follow the trail that skirts the ridgeline rocks, entering a loose class II gully, and following a grassy, steep ridge to the top. This gully is a bit steeper and looser than the gully lower down.
My trip report from December 2015, where I climbed the ridge and descended the class II gully: The Mountains Are Calling: Gavilan 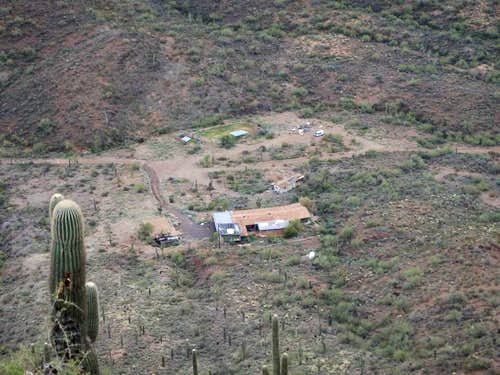 Starflash Ranch from the summit.
At the base of this mountain sits StarFlash Ranch, site of a famous raid in the mid 90s by the the Bureau of Alcohol, Tobacco and Firearms after owner Chuck Byers was stockpiling a large quantity of explosive, including materials to make grenades and booby traps.
This was swept into the dustbin of history until November 2013 when a man trespassing on the property stepped on an explosive and lost his leg: http://www.abc15.com/news/region-northeast-valley/anthem/new-river-explosion-mcso-bomb-squad-atf-experts-investigate-property
I would avoid any approaches from the south, who knows what else is buried on his property. He actually has his own website for the ranch including a Topo on the property boundaries, which I would sincerely try to avoid: http://www.starflashranch.com/topo.htm
Jumping cholla and other vicious cacti abound in the area. The cholla like to decay and fall all over the place, leaving land mines of thorns. I once helped pull hundreds of thorns from the paws and body of a rambunctious German Shepard who happened into a particularly bad area of them. Not a peak for a dog.

At least one SP member reports seeing 3 separate diamond back rattlers on and near the hill as he made an evening summit in late April. I have not seen snakes in the area during the day in December, June or on earlier March-April spring outings.