The mountain range of Geraneia is situated south-west (SW) of Athens on the Loutraki peninsula. With its highest peak Markiplagi at 1369m and multiple other peaks over 1000m, it is a non-impressive range but its flora, views and climate make for amazing hikes. It is a quite prominent range rising directly from the Corinthian gulf, it is the geological continuation of the northern Peloponnese mountains (e.g. Zhreia) and I mainly rocky.
The mountain is very lush and gets quite a lot of rain during Autumn and winter, the terrain is rugged and rocky made generally by hard rock that due to the fact that it isn't sponge-like there aren't many rivers although there are many traces of old rivers and gorges scattered throughout the range.

The range sits above the city of Loutraki, Schinos, Kineta and many more. To get there from Athens Int, the closes airport, head towards Corinth and when reaching Kineta enter the roads towards Sparta or Pisia, this way you enter the general area of Geraneia.
To reach:

This summit, at 1032m I a not all that impressive summit but its steep south face directly above the sea offers great hiking. There are 3 trailheads to reach the peak, two starts at around 550m of elevation whilst one starts at 730m.
The trailheads are:
The peak is rugged throughout both faces and plateaus at around 850m to a flat top and hill like peaks.

This summit, more rugged and rocky at 1068m is not a very high and impressive peak but it's more taunting appearance above Schinos village invites you to climb it. It can only be climbed from one side, the Northern Schinos village side.

The highest peak in the range, Makriplagi, at 1369m can be seen through the area; the peak houses a telecommunications station on the imposing ridge. The ridge is quite long at 1.8km and is pretty much bare without trees and just hard rock. The peak can be accessed by road and trail. The main trail starts under the summit on the West-side and continues between two peaks. 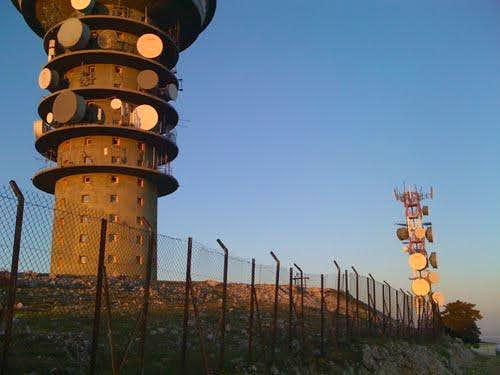 The telecoms station at the summit 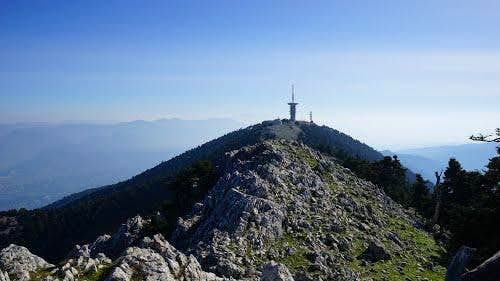 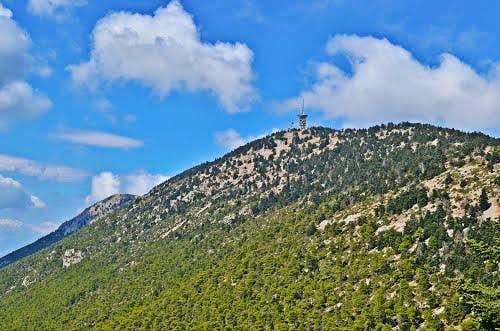 The summit from the south road

The climate at the mountain pretty much copies the climate of Parnitha Athens highest peak. The weather is not so extreme due to the location of the mountain and the relatively low altitude of its summit. Although if you climb it through a storm high winds on the ridge should be expected.
It almost never snows on the mountain although a large storm like the January 2017 storm would get snow on the mountain.

You are allowed to camp on the mountain, although the availability of camping spaces is questionable due to the ruggedness of the range as a whole. There is generally poor access throughout and springs for water are scarce.